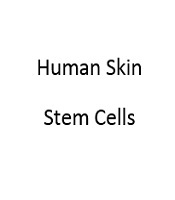 We have given a detailed description of skin tissue collection, processing, and cell culture. The RNA isolation and cell proliferation by the MTT assay have also been elaborated.

All the protocols detailed here were standardized in the All India Institute of Medical Sciences (AIIMS), New Delhi. We hope the protocols will be of help to those who initiate studies of skin stem cells and new investigators who may come up with further modifications. This will benefit advancement in this field.

This article is the summary of the successful culture of human skin stem cells in the laboratory and their characterization at the All India Institute of Medical Sciences (AIIMS), New Delhi, India. This article will be of great help to the beginners working in the area of human skin stem cell, regenerative biology, and tissue engineering. It may also have a variety of other applications.

Healthy pigmented skin tissues were collected from children admitted for circumcision at the Department of Pediatric Surgery, AIIMS.

The foreskin was circumcised following the injection of the local anesthetic in a cleanroom facility at the Department of Pediatric Surgery, AIIMS, and collected in a sterile vial. The vials containing foreskins were kept in a cool pack (4ºC) and transported to the laboratory under sterile conditions. The size of the foreskin tissue biopsy was approximately 2.5 cm × 2.5 cm.

After incubation, the epidermal layer was easily peeled off from the dermis. The dermis was scratched with the blunt face of the scalpel blade to collect basal layer cells, which might be sticking on the dermal surface. The dermis was discarded, and the epidermis was washed three times with phosphate-buffered saline (PBS) for 20 min each. The epidermis was placed into a Petri plate and then, using a scalpel blade (No. 22, Glass Van, India), it was chopped into small pieces of approximately 2 mm × 2 mm size. Some of the chopped pieces were used for explant culture. The rest of the chopped pieces were trypsinized to prepare single-cell suspensions.

To prepare single-cell suspensions, chopped pieces were trypsinized (0.25% trypsin and 0.05% EDTA) at 37ºC in a carbon dioxide incubator for 20 - 25 min. The tube was vortexed twice (for five seconds each) during the incubation period to aid mechanical dissociation. The action of trypsin was neutralized by adding an equal volume of trypsin inhibitor solution (T6522 Sigma, USA). The solution was further added with 5 mL of PBS and filtered through a 70-μm cell strainer (Becton Dickinson, Sunnyvale, CA, USA). The filtrate was centrifuged at 200 g for 5 min to obtain the cell pellet and then reconstituted in PBS (1 mL).

The trypan blue dye (TC L005, Hi-Media, Mumbai, India) was used to check the viability of cells. Trypan blue is expelled out by viable cells. As the trypan blue dye cannot penetrate the live cells, they appear bright, and the dead cells, which take up the dye, appear blue under the bright field microscope.

The chopped pieces of the skin epidermis, prepared, as stated above, were used for the explant culture of skin stem cells. About nine explants (approximately one skin explant/cm2 area of the culture dish) were placed in a 35-mm culture dish. Initially, a small volume of media was added to avoid the floating of the explants. After 6 - 8 h, approximately 1.5 mL of epidermal stem cell culture media was added slowly to avoid explant floating. The culture dish was incubated in a 5% CO2 incubator at 37ºC. The media were changed every three days.

Skin stem cells were seeded over the feeder layer of 3T3 mouse fibroblasts at a density of 5,000 cells/cm2. The culture dish was incubated at 37ºC in a CO2 incubator. The media were changed every three days.

Skin stem cells at 70% - 80% confluence were trypsinized and re-plated for expansion in vitro. The epidermal stem cells culture media were aspirated out, and the adherent cells were washed with PBS. After washing, PBS was aspirated, and 150 µL of 0.25% trypsin - 0.05% EDTA solution (25200056 ThermoFisher, USA) was added to 35-mm dishes, and then incubated at room temperature for 5 min. The culture flask was given the mechanical force (tapped with index finger) between the incubation periods to dislodge adherent cells. The flask was observed under an inverted microscope (Eclipse Ti, Nikon, Japan) to visualize the full dislodgement of cells. Once the cells were fully dislodged, a trypsin inhibitor (T6522 Sigma, USA) in the volume equal to that of trypsin EDTA (25200056 ThermoFisher, USA) was added. The cell suspension was collected in a 1.5-mL centrifuge tube and centrifuged at 200 g for 5 min to obtain the cell pellet. The supernatant was discarded, and the cell pellet was reconstituted in PBS. Finally, cells were counted for number and viability by the trypan blue dye exclusion method. The cells were passaged at a split ratio of 1:3.

The RNA was quantified using a nanophotometer (Implen, Germany). First, a blank was set for RNA using nuclease-free water. Then, 1 µl of RNA was placed in the lid factor of 50 and mounted on the holder. The absorbance was measured at 260 and 280 nm. The quantity of RNA per µL of the solution was calculated using nanophotometer software.

In this method, 1 µg of RNA was taken, and 0.5 µg of the oligo (dT)18 primer was added to the reaction mixture. Then, DEPC water (HiMedia, India) was added to reach a volume of 15 µL and incubated at 70ºC for 5 min to break RNA secondary structures. After incubation, the sample was snap chilled to stop the formation of RNA secondary structures. Next, the following components were added to the primary mixture: 4.0 μL RiboLock RNase Inhibitor (EO0381, Thermofisher, USA), 0.5 μL (20 units) dNTP mix (10 mM each) (U1511, Promega, USA), and 2.5 μL (1 mM final conc.) M-MuLV RT enzyme (M1701, Promega, USA).

The expression of respective gene transcripts was quantified relatively. The cDNA concentration of samples was optimized to equilibrate the GAPDH expression in each batch of samples. Electrophoresis (Bio-Rad, USA) was performed by loading 10-μl PCR products on a 2% agarose gel (Himedia, India) with ethidium bromide to check gene expression, followed by visualizing in the gel documentation system (Alpha DigiDoc, ImageTech, USA).

This study aimed to establish a protocol for the culture and characterization of epidermal stem cells of human skin origin. These cells have huge potential in clinical settings and research on the basic biology of stem cells (1-5). The foreskin tissue is widely used for skin cell culture. The foreskin and facial biopsy were used by Eisinger and Marko for the culture of melanocytes in vitro, as followed by several other scientific groups (6-11).

For the culture and expansion of skin, three prevailing methodologies are adopted: (I) suspension culture over fibronectin-coated plates, (II) explant culture over fibronectin-coated plates, and (III) feeder layer culture over 3T3 fibroblast. The suspension culture of skin cells has also been tried previously for the generation of skin spheres and hair spheres (12, 13). Recently, the suspension culture has been used for the culture of Dermal Stem Cells (DSCs) (14-16). The use of feeder cells in the cell culture was first reported by Puck et al. (17). The successful culture of human keratinocytes was pioneered by Rheinwald over the feeder layer of murine 3T3 fibroblasts. Rheinwald reported that the culture of keratinocytes over the 3T3 feeder layer enhanced the growth (18-21). Balasubramanian et al. showed that the culture of limbal corneal epithelial cells over murine 3T3 feeder cells enhanced the stemness for longer periods in-vitro (22). Moreover, hair follicle explant culture was reported by Zhang et al. (23).

The field of skin stem cell identification, characterization, and application has shown great progress in regenerative biology and tissue engineering due to the ease of skin tissue access and development of tissue culture techniques, but still, many queries need to be answered. Skin stem cells are being employed in the management of pigment disorder and burns by expanding small biopsies into a large number of cells, thereby covering a large surface area of the affected skin (36). The cultured skin stem cells are also being used in genetic engineering experiments, which is opening its way in the management of various genetic disorders (37-39).

With recent developments in the field of animal cell culture and tissue engineering, skin stem cells are being employed in a wide variety of applications. These novel technological approaches will further enhance our understanding of the basic and applied biology of skin stem cells, which will open unlimited possibilities in the advancement of regenerative biology and technology development.

We acknowledge the Department of Pediatric Surgery of AIIMS, New Delhi, for providing foreskin samples.

Copyright © 2019, Journal of Skin and Stem Cell. This is an open-access article distributed under the terms of the Creative Commons Attribution-NonCommercial 4.0 International License (http://creativecommons.org/licenses/by-nc/4.0/) which permits copy and redistribute the material just in noncommercial usages, provided the original work is properly cited.
download pdf 145.53 KB Peer Review Comments ( 101.58 KB) Get Permission (article level) Import into EndNote Import into BibTex
Number of Comments: 0