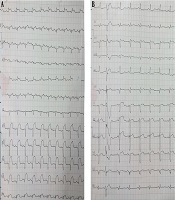 Myocardial infarction (MI) is the most frequent cause of ischemic heart death. MI is generally assumed to be due to arterial thrombosis superimposed on an atherosclerotic plaque in an epicardial coronary artery. Total occlusion of an epicardial coronary artery leads to ST elevation, while non-occlusive lesion leads to ST depression. We hereby have reported a case of ST-segment elevation myocardial infarction with normal coronary arteries angiography. A 35-year-old man presented with typical chest pain, nausea, vomiting and cold sweating. ECG obtained at admission and 30 minutes later revealed sinus tachycardia with ST-segment elevations (> 2 mm) in leads V2-V5. Cardiac biomarkers including creatine phosphokinase (CPK), creatine kinase muscle-brain (CK.MB) and troponin high sensitive were elevated. The standard treatment for MI including pain relief, aspirin, thrombolysis if indicated and beta blockade were begun for the patient. STEMI was confirmed and thus, angiography was performed. Coronary angiography revealed normal coronary arteries without any angiographic evidence of stenosis, coronary artery dissection, embolism, plaque rupture or vasospasm.

The most common mortality from ischemic heart disease is acute myocardial infarction, which accounts for two-thirds of mortalities (6). The most common cause of acute myocardial infarction (AMI) is superimposition of the thrombosis on atherosclerotic plaque and as a result, stenosis in an epicardial coronary artery, which disrupts cardiac tissue perfusion and then symptoms appear. Acute myocardial infarction has other reasons such as spasm, coronary artery dissection etc. (7, 8). Acute chest pain is the common complaint of patients that admitted with AMI. Other symptoms these patients is include shortness of breath, cold sweating, nausea, stroke, weakness, dizziness, lethargy, headache and etc. (9).

Cardiologists use the electrocardiogram (ECG) and cardiac biomarkers widely for diagnosis, management, and prognosis of AMI, because of its simplicity, safety, easy accessibility, and low cost (10, 11). Complete coronary artery occlusion causes elevated ST, whereas non-obstructive lesion leads to ST depression (11). A combination of symptoms, ECG changes, and cardiac biomarkers, such as troponin, creatine phosphokinase (CPK), creatine kinase muscle-brain (CK.MB) is used to diagnose of AMI (8, 12).

Coronary angiography provides the first in vivo imaging of the coronary arteries and identifies the culprit lesion (13). After verification of AMI based on ECG changes and increased cardiac biomarkers, angiography is done to determine the target lesion and extent of stenosis and coronary perfusion (14).

A 35-year-old man presented to the emergency department with 1 hour of acute onset of left-sided chest pain at rest, retrosternal, pressure sensing, and left shoulder radiation. He also complained about nausea, vomiting and cold sweating. He reported active tobacco smoking but denied other drug abuse that cause cardiac ischemia, including amphetamines such as cocaine. He has also disclaimed personal or family history of coronary artery disease, diabetes mellitus, hypertension, and hyperlipidemia. He denied any previous episodes of chest pain, exertional symptoms, previous thromboembolic disease, nausea, vomiting, or syncope. His body mass index (BMI) was 21.7 kg/m2. On initial examination, his blood pressure was elevated at 130/95 mmHg, regular tachycardia at 114 beats per minute, respiratory rate was 18 breaths per minute with a pulse oximetric figure of 96%. His cardiac examination included a normal first and second heart sound and no appreciable murmur or pericardial friction rub. Pulmonary auscultation was normal, as well an abdominal examination.

Immediately after admission to the emergency department, ECG, cardiac biomarkers and other laboratory tests were ordered. All evaluations were performed by cardiologists.

The 12-lead ECG was obtained at admission and 30 minutes later revealed sinus tachycardia with ST-segment elevations (> 2mm) in leads V2-V5, that exhibit an acute anterior ST-segment elevation myocardial infarction due to a probable critical stenosis of the left anterior descending (LAD) coronary artery (Figure 1A). 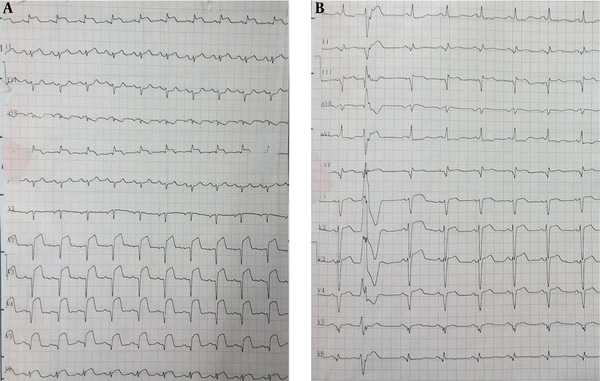 ECG before and after starting treatment. A, The 12-lead ECG obtained at admission revealed sinus tachycardia with ST-segment elevations in leads V2-V5; B, next of 2 h the ECG showed dynamic changes in the ST-segment as a down.

STEMI was confirmed based on clinical findings, ECG changes, and cardiac biomarker evaluations. Thus, angiography was performed within 55 minutes of the initial ECG, and was analyzed independently by two experienced interventional cardiologists. Coronary angiography revealed normal coronary arteries with TIMI III flow without any angiographic evidence of stenosis, coronary artery dissection, embolism, plaque rupture, or vasospasm. Two hours after starting the treatment and performing angiography, the ECG showed dynamic changes in the ST-segment as shown in Figure 1B.

Echocardiographic examination was performed within 24 h of admission and after 72 hours. Echocardiographic diameters were measured as transthoracic, which reported normal global wall motion and left ventricular (LV) size with normal mitral, aortic, tricuspid, and pulmonic valve. LV systolic and diastolic function was normal with left ventricular ejection fraction (LVEF) of 55%. However, in the second echocardiography after 72 hours, there was moderate systolic dysfunction with LVEF of 45% and mild global hypokinesia.

The initial CBC-diff revealed a hemoglobin count of 15.5 g/dL, a platelet count of 238 × 103/µL, and leukocytosis with a total count of 14.3 × 103/µL. A complementary laboratory workup showed that cholesterol, triglyceride and LDL (low density lipoprotein) levels were within limits but HDL (high density lipoprotein) was low at 33 mg/dL (normal: > 50 mg/dL). Complete immunological workup was unremarkable. The erythrocyte sedimentation rate (ESR) and C-reactive protein (CRP) were within the normal range. Coagulation screening tests and coagulation factors were within the normal range for thrombophilia state.

We hereby have reported a case of anterior STEMI with normal coronary arteries in a 35-year-old man that was presented with typical chest pain, nausea, vomiting and cold sweating.

Atherosclerotic coronary artery disease is the most common type of AMI, however; they also occur in people with normal coronary artery disease (MINCA) (15, 16). In the absence of angiography, visible pathology and lumen irregularities, including symptoms of atherosclerosis, thrombosis, or spasm, are called normal coronary angiograms (17, 18). MINCA comprises at least 1% - 12% of total myocardial infarction, and interest and awareness of MINCA due to repeated use of coronary angiography has recently increased (19, 20).

MINCA is an important subgroup of myocardial infarction with a frequency of at least 1% - 12% of all myocardial infarctions that are typically diagnosed in young patients. Most cases occur in men and under 50 years of age; as in our case it was a 35-year-old man. The incidence MINCA is usually higher in Mediterranean countries than in other countries (19, 20).

Various mechanisms for MINCA have been proposed such as cardiovascular conditions including Tako-tsubo-like syndrome, concealed atherosclerosis, spontaneous dissection of coronary arteries, myocardial bridges, hypertension, congenital coronary anomaly, and acute myocarditis, although the single definite explanation and pathogenic mechanisms of MINCA were absent and unknown (20, 21). The most common mistake with MINCA is Taco-Tsubo syndrome and acute myocarditis (17). Extracardiac conditions described by MINCA include drug abuse, carbon monoxide poisoning, hypercoagulable states, autoimmune vasculitis, emotional stress, and previous psychiatric vulnerability that were suggested as possible explanations (17, 20-22). All these conditions seem to cause MINCA with various mechanisms including endothelial dysfunction, coronary vasospasm, coronary thrombosis in situ, or embolization from a distal source with spontaneous lysis (21, 23).

As in this study, history of angina, and traditional risk factors for coronary artery disease are virtually absent, except for smoking, which is the most common MINCA risk factor with 94.5% (7). Angiography of chronic smokers and consumption of nicotine products often show vasospasm and endothelial dysfunction, although there are no angiographic findings to indicate the presence of atherosclerosis in these patients with MINCA. The history of recurrent viral infections and symptoms of stress (emotional and physical) is also more common in MINCA patients (20, 23).

The initial management of these patients is the standard treatment for M-including pain relief, aspirin, thrombolysis if indicated and beta blockade. Treatments include aspirin, a beta-blocker, a statin and an angiotensin converting-enzyme (ACE) inhibitor. Hypertension and diabetes should be well controlled and smoking should be discouraged (21, 24).