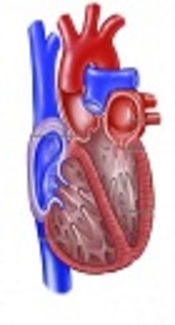 Arrhythmogenic cardiomyopathy is electrocardiographically characterized by right precordial T-wave inversions and epsilon waves as major criteria. Additionally, terminal activation delay of 55 ms or more serves as a minor criterion. Although ther are more and more evident pathological data of right ventricles without dilatation or aneurysm, typical fibrofatty abnormalities and myocardial atrophy exist. The ECGs of these patients lack the right precordial T-wave inversion and epsilon waves. Lead aVR and lead V1 could become more and more relevant. 413 cases with arrhythmogenic cardiomyopathy (292 males, mean age 46.3 ± 11.6 years) and a collective of normal proband (1496 patients, 859 males with an age range of 18 - 81 years) were analyzed with regard to ECG appearance of lead aVR and the amplitude of inverted T-waves in lead V1. With a specificity of 99.9%, a positive predictive value of 99.7% and a negative predictive value of 98% lead V1 and aVR were most relevant to diagnose arrhythmogenic cardiomyopathy if an amplitude of Q waves of 3mm or more, R waves of 2 mm or less, inverted T waves of 2 mm or less in lead aVR and inverted T waves in lead V1 were present. These two leads appear most relevant to make the diagnosis of arrhythmogenic cardiomyopathy even in cases without right ventricular dilatation and right ventricular aneurysms.

According to a presentation of Christina Basso, leading pathologist at the university hospital of Padua, Italy, right ventricular dilatation is meanwhile a rare event in cases with arrhythmogenic cardiomyopathy. Right ventricles often present without dilatation, aneurysms and wall thinning, but the typical presentation of fibrofatty abnormalities with myocardial atrophy in a normally seized and thickened ventricle. In all cases the ECG revealed no typical abnormalities like right precordial T-wave inversions or epsilon waves in right precordial leads.

We analyzed 413 cases with arrhythmogenic cardiomyopathy (292 males, mean age 46.3 ± 11.6 years) and a large collective of normal proband (n = 1596, 859 males with an age range between 18 and 81 years) of the university clinic of Glasgow, U.K. (director of the section electrocardiography, institute of health and Wellbeing, royal infirmary Glasgow: Prof. Peter Macfarlane). Although specificity of typical changes in lead aVR (large Q-wave, small R-wave and T-wave inversions) and the analysis of the amplitude of negative T-waves are, per se, moderate (81 and 86%, respectively), the combination of these two parameters should be analyzed with regard to statistical values. As the last step, the amplitude of inverted T-waves in lead V1 of 2 mm or more should be added.

In 413 cases with arrhythmogenic cardiomyopathy (292 males, mean age 46.3 ± 11.6 years) epsilon waves were detected in 99 cases (24%); T-wave inversions in right precordial leads were present in 227 cases (55%). At right ventricular angiography deep horizontal fissures in the right ventricular outflow tract could only be seen in 57 cases, whereas a mixture of deep horizontal fissures and bulging were seen in the other cases. Magnetic resonance imaging was not performed in any cases. True aneurysms could not completely be excluded by MRI.

However in apparently normal hearts but with arrhythmogenic cardiomyopathy without dilatation and aneurysms, ECG analysis should be directed to the amplitude of inverted T-waves in lead V1 and its exclusion in lead aVR.

The simple means of standard ECG remains the gold standard method in the diagnosis of arrhythmogenic cardiomyopathy in spite of specific cardiac imaging techniques like nuclear magnetic resonance technique (5) or right ventricular angiography (6). In the future, bipolar ECG, could be a technique, especially for lead V1, to improve outcomes (7).

Copyright © 2017, Multidisciplinary Cardiovascular Annals. This is an open-access article distributed under the terms of the Creative Commons Attribution-NonCommercial 4.0 International License (http://creativecommons.org/licenses/by-nc/4.0/) which permits copy and redistribute the material just in noncommercial usages, provided the original work is properly cited.
download pdf 83.82 KB Get Permission (article level) Import into EndNote Import into BibTex
Number of Comments: 0