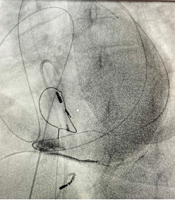 We report the case of a 63-year-old female patient who was urgently admitted from electrophysiology laboratory (EP Lab) to operating room (OR) with hemodynamic instability and hemothorax. The dual-chamber pacemaker had been implanted 15 years ago. After median sternotomy she was evaluated for perforations and raptures of cardiac chambers and status of right ventricle (RV) lead of permanent pacemaker (PPM) by the surgeon. Evaluations revealed that RV and right atrium (RA) have been ruptured and tricuspid valve has been damaged as a result of dislodgment of RV PPM lead secondary to manipulations in electrophysiology (EP) lab. This lead was withdrawn through SVC and ruptures were repaired and tricuspid valve was replaced. The epicardial pacemaker was placed by the surgeon. After surgery, the patient was transferred to ICU, after three days she was discharged to ward and after 5 days from surgery she was discharged from hospital in good condition.

Cardiac pacing is the proven therapy of cardiac conduction disturbance and it is an effective treatment modality in many acute cardiac arrhythmias (1, 2). Despite their useful properties, both pacemakers and ICDs are associated with a number of complications. The most frequent include: pneumothorax, myocardial perforation, lead malposition, displacement or fracture (1). Cardiac perforations from lead malposition are rare and overall perforation rate after lead dislocation is 0.1 - 1% in pacemakers and 0.6 - 5.2% in ICDs (3). The highest rate of perforation reported based on autopsy was 27% for patients with atrial leads (4).

There are no uniform classifications accounting for the complications. It may be acute (developing during the first 24h after implantation), sub-acute (up to 1 month) or chronic. Another classification system divides perforations into early occurring during the first month after placement and late (5). We described a case of acute cardiac perforation that had occurred due to manipulation by of PPM RV lead in electrophysiology (EP) lab.

A 63-year-old women who had implanted PPM 15 years ago and replaced its generator twice in the past 4 and 8 years was presented. She had been followed up every 6 months. She had a tooth infection two years ago, but it was not treated appropriately, and she developed a tooth abscess, which led to endocarditis. The patient had a history of hypertension, diabetes mellitus and hypothyroidism. Drug therapy was used to manage all of these comorbidities. The LVEF has been reported about 40%. The electrophysiology specialist decided to take out the PPM. During the removal of the RV lead, the electrophysiology specialist noticed that the RV lead was set out of the cardiac silhouette on the fluoroscopy display (Figure 1). 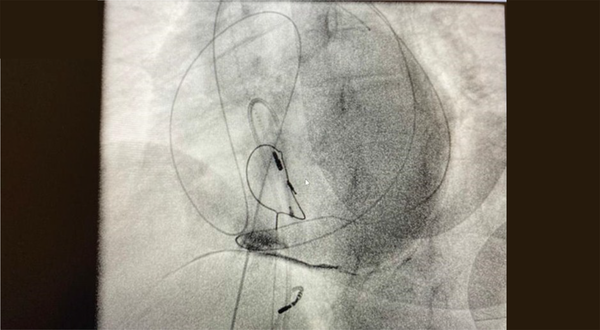 The right ventricular lead is out of heart silhouette under fluoroscopy.

The patient developed acute hemodynamic instability, hemothorax, and tamponade. Then, she was transferred to OR with BP ≤ 60/40 mm Hg with rapid and shallow arterial pulse. Ventilation was supported by O2 and bag valve mask. She was confused and epinephrine infusion immediately started. After administration of Rocuronium 50 mg the patient was intubated and epinephrine infusions increased to 0.15 - 0.2 µg/kg/min.

In electrophysiology lab the atrial line was placed in right femoral artery and right internal jugular vein was cannulated. In OR two large bore (14 gauge) peripheral IV lines were taken and the standard monitors were established. Cerebral oximetry showed 24%. With rising BP, we gradually infused fentanyl (100 µg), Midazolam (2 mg) and Atracurium (50 mg) with titrated doses. Then with rising BP, cerebral oximetry that raised to 45 - 50% and maintained on this range until end of the operation. After a median sternotomy, the surgeon discovered a hematoma in the pericardial region. The patient was placed on cardiopulmonary bypass (CPB), and the surgeon looked for a PPM lead and its damages. He discovered that the RV and RA had ruptured, and the tricuspid valve had been damaged. The surgeon repaired the rupture of RV and RA, replaced the tricuspid valve and took out the RV lead of PPM through SVC. The patient was separated from CPB, with epinephrine infusion at 0.15 µg /kg/min.

In the first ABG sample hemoglobin (Hb) was 12 g/dL but in the second ABG sample Hb dropped to 6/1 g/dL and under CPB, three units of packed red blood cells (PRBC) were transfused to her. Hb in ABG sample after CPB separation was 7/5g/dL. Three units FFP and 1 g fibrinogen was infused after separation from CPB.

Iatrogenic injuries can happen in any medical facility or during interventional procedures like pacemaker placement (2). In this case report we present an urgent life-threatening RV and RA rupture and tricuspid valve injury in a 63-year-old female who was admitted to our center to take out the PPM leads.

Clinical findings of ICD lead displacement include chest pain, dyspnea, hypotension or syncope. They are relatively non- specific and depend on the site of the displaced lead (pericardium, pleural space, lung parenchyma or chest wall). The clinical course may be dramatic if tamponade or massive hemothorax occurs, and may ultimately be fatal. Inappropriate electrical stimulation of the chest wall muscle or diaphragm can also cause hiccups, and perforation has been reported on rare occasions (6).

Perforations may also be asymptomatic. Hirschl et al. has reviewed 100 chest CT examinations in asymptomatic patients with implantable cardiac devices and found perforation in 15% and more commonly with atrial (15% of atrial leads) than ventricular leads (6% of ventricular leads) (7). Perforations due to right ventricular leads occurred significantly more often with defibrillators (14%) than with pacemakers (3%). The risk factors for perforation are, using of active fixation leads, concomitant transvenous pacing, corticosteroid therapy, anticoagulation, female sex and a body mass index (BMI) under 20 kg/m2 (8).

Unprotected rotation of the RV lead of the PPM in this patient resulted in RV and RA perforation and rupture, as well as tricuspid valve injury. In fact RA perforation is more common than RV perforation (2). The RA wall is quite thin, with a diameter of 2 mm; nevertheless, the RV wall is 2 times thicker than the RA wall (4 mm) (2).

Symptoms of cardiac perforation caused by a pacemaker are uncommon, but they can be fatal. Subacute and chronic perforation might be asymptomatic or cause major (and perhaps fatal) symptoms. Tamponade is a life-threatening complication caused by rapid blood collection in the pericardial sac, which causes increased pericardium pressure and disruption in venous return, as well as a decrease in ventricular ejection volume, which can lead to hemodynamic collapse, cardiogenic shock, arrhythmia, or death. Cardiac perforation can occur as a result of lead manipulation, RF ablation-induced cardiac tissue rupturing, or iatrogenic damage during atrial septum puncture. Extra sinus and extreme catheter manipulation, especially in thin wall area like roof of LA, RV free wall, RV outlet, RV apex and atrial appendage could lead to cardiac rupture. In an assay that was taken from Mayo Clinic, they found out that using oral corticosteroids is an independent risk factor for cardiac perforation. CXR and fluoroscopy are diagnostic methods for cardiac perforation in cases that leads are seen out of heart silhouette (4). TEE and TTE are diagnostic tools that could show the tip of the lead in pericardium or pericardial infusions. The best way for diagnosing heart perforation, however, is a chest CT scan, which is considered a gold standard tool (9).

In symptomatic cardiac raptures, the best therapeutic method is taking out the device completely. Most of the literature writers believed that the patient with cardiac perforation must perform their procedures in centers that specialize for taking out the device by open or percutaneous technique in OR with standard monitors, cardiac surgeon, cardiac anesthesiologist and echocardiography in place. They suggested that it should be done under TEE both during and after the procedure.

Copyright © 2022, Multidisciplinary Cardiovascular Annals. This is an open-access article distributed under the terms of the Creative Commons Attribution-NonCommercial 4.0 International License (http://creativecommons.org/licenses/by-nc/4.0/) which permits copy and redistribute the material just in noncommercial usages, provided the original work is properly cited.
download pdf 2.76 MB Get Permission (article level) Import into EndNote Import into BibTex
Number of Comments: 0