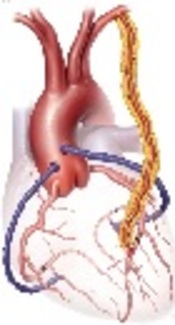 Electrolyte abnormalities are common in coronary artery bypass graft surgery (CABG) using cardiopulmonary bypass (CPB). Changes in serum sodium (Na) concentration more than 15 meq/L in perioperative period (Delta Na > 15) is considered as significant fluctuation. The aim of this study was evaluating the relationship between the significant fluctuation of serum Na level and the complications after coronary artery bypass graft surgery.

In this prospective observational study 59 patients who were candidates for CABG with CPB were enrolled into the study. We recorded patients’ demographic data, arterial blood gas analysis (ABG), serum electrolytes including Na levels from anesthesia induction, during and after CPB up to 24 hours after admission in ICU. Postoperative complications until discharge from ICU were compared between patients with significant Na fluctuation and those without it.

Approximately 63% of the coronary artery bypass graft (CABG) surgeries are carried out on cardiopulmonary bypass (CPB), whereas 27% are CBP free (1). CPB has many advantages, however it could be accompanied by complications like electrolyte and acid-base imbalance, atelectasis, hemolysis, thromboembolism and reduced lung capacity. Cardioplegic solutions and induced hypothermia cause imbalance in the metabolism of serum potassium and PH levels (2). Surgery stress increases catecholamine release thus resulting in antidiuretic hormone (ADH) inducing imbalance in electrolyte and fluids (3). Dilution of the volume in circulation as a result of the volume suctioned from the surgery field and the fluid loss replaced by crystalloids and colloids all cause hemostatic and electrolyte imbalance (4). One of the important electrolytes in this field is sodium. Sodium is an important electrolyte in blood pressure maintenance in normal ranges and also the proper function of nerves in muscles (5-8).

Moreover sodium plays a crucial role in hemostats and maintaining the physiology of cardiac muscle cells (7, 9). During CPB hypernatremia and hypernatremia with more than 5 meq/L fluctuations may cause complications for patients (10-15). Fluctuations in serum sodium levels are common in patients with heart disease, moreover hyponatremia has been reported as an independent risk factor for morbidity and mortality after cardiac surgery (7). Hyponatremia is induced because of hemodilution during CPB, serums and vasopressors which are applie (15).

Previous studies have shown the influence of hyponatremia on neuron dysfunction after CABG like stoke, encephalopathy and cognitive dysfunction (9). Renal failure and use of mannitol can cause hypernatremia which increases cellular permeability and causes edema (2). Difference in sodium levels is a strong predictor for mortality in patients hospitalized and increase in sodium levels after discharge has been more associated with survival compared to hyponatremia. Fluctuations in sodium levels more than 12 meq/L have been reported to be associated with mortality in ICU (15). Reports have shown that fluctuations more than 15 meq/L have been associated with seizure postoperatively (16).

In previous studies lower levels of sodium have been shown to be associated with nervous complications, however the influence of sodium level fluctuations after CABG and CPB is still not evaluated clearly. The aim of this study was to investigate whether “high serum sodium level variation” during and after CABG is associated with increased postoperative complications.

In this prospective observational study 59 adult patients with American society of anesthesiologists (ASA) physical status class II-III undergoing on pump CABG were enrolled. All participants were scheduled for a first time surgery, with cardiopulmonary bypass with no other concomitant surgery such as valve replacement. Patients received detailed information about the surgery and provided written informed consent. The study was approved by the local ethic committee.

Demographic data and intraoperative variables were recorded for all patients. Laboratory data are measured during and after surgery and for the period of ICU stay. Information such as anesthetic drugs and administered solutions, transfusion of blood, diuresis and filtration volume, time of aortic cross clamp, CPB and surgery time, arterial blood gas (ABG), possible complications during and 24 hours after surgery were recorded for all patients. In postoperative period the amount of chest tube drainage, diuresis, ventilation time, minor and major complications (cardiac, renal, respiratory, hepatic neurologic and hematologic) were also documented for all patients.

ABG analyses was done by Techno Medica 602 and 603 apparatus. In this method after the parameters was received from the device they were compared with the guideline book which was considered true if it matched the normal ranges.

All patients underwent on pump CABG and body temperature was kept 30 - 32°C. All patients received 300 U/kg heparin intravenously to prevent clot formation, and if needed more for keeping the activated clotting time more than 400 seconds. Alpha stat was used to keep acid and base balance. During CPB, hemofiltration was used if needed. Protamine sulfate 1 mg per 100 U used heparin was used for heparin reversal at the end of the CPB and if ACT was abnormal additional doses were used.

The prime solution consisted of 1000 - 500 mL of lactates ringer solution. Also 100 U/kg of heparin was added to the prime. After cardiac arrest, cardioplegic solution in cold crystalloid with 1:1 ratio was administered with a 20 minute interval. All patients received tri-nitroglycerin (TNG) infusion with the dose of 50 - 200 µg/h during surgery and ICU stay. Patients Na levels were recorded from the beginning of operation until 24 hours after ICU admission. Maximum and minimum values of the patients’ sodium subtracted each other to calculate Delta Na levels (maximum fluctuation). The patients experienced equal or more than 15 meq/L Na fluctuation considered as “15 ≥ ∆ Na Group” and those with fluctuation of serum sodium levels less than 15 meq/L were regarded as “15 < ∆ Na Group”. All demographic and clinical data and postoperative complications were compared between these two groups.

aValues are expressed as mean ± SD or median (interquartile ranges).

Severe fluctuations in electrolyte level in CABG patients is considered as a complication. In this study, patients with more fluctuations in sodium levels had lower primary creatinine levels. The group with sodium fluctuations had more lactate levels in ICU and lower BE levels. These patients had higher levels of sodium from the time entering the ICU. In our study one patient with high sodium levels was dead. In Bagheri et al. (2) study, 4 patients died in which 3 were associated with electrolytes fluctuations. Homoky (13) reported 2 deaths which had normal sodium levels. Madan et al. (16) reported correlations between sodium and BUN levels with mortality. However, Hudcova (14) showed higher fluctuation sodium in patients with lower levels of sodium. Madan et al. (16) also found the same results. This discrepancy could be because of the different definition from increased sodium which was more than 2 meq/L in Madan study from 60 - 270 days after the patient was discharged, however in our study this differences was 24 hour after ICU stay.

In our study, patients with at least one complication compared to patients with no complication were older, had lower BSA and EF. In the present study, patients with more complications had overall longer ICU stays. Surgery time, clamp time, CPB time, ventilation and complications did not show any significant differences between groups. Conversely in Kim et al. study (15) there were significant differences between groups with complications and without, in aortic clamp time and CPB time, which may be because of congenital heart diseases studied in the research. In this study sodium bicarbonate administration did not affect serum sodium levels. However in previous studies showed higher levels of serum sodium in patients receiving sodium bicarbonate (14-20).

It is not clear why changes in sodium levels in patients undergoing CABG, which have normal sodium levels, has correlation with post-operative complications. We assume that physiologic changes might have a correlation with serum sodium osmolality changes. Overall changes in serum osmolality affects all cells, however brain is the most sensitive organ. When the serum osmolality increases as a result of increased sodium levels, the osmolality in the brain and other organs also increases (31). Although the electrolyte correction is fast, osmolyte balance is incredibly slow which might affect and harm the body. Although changes in sodium levels in our study did not show any significant differences, patients undergoing CABG might encounter complications in brain and other vital organs which renders information about the mechanism of high level sodium in leading to post-operative complications.

This research had some limitations. One limitation is limited sample size and being a single center study. The exact data may not have been recorded for all patients like transient arrhythmias and other complications like liver disease.