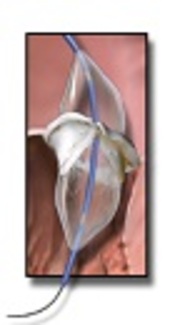 The purpose of our study was to prove the hypothesis that balloon pulmonary valvuloplasty could effectively reduce valvular gradient ranged 30 to 50 mmHg to less than 30 mmHg in long-term follow-up.

This cross-sectional study was performed on 271 consecutive patients aged 12 to 67 years who suffered from severe pulmonary stenosis who were scheduled for balloon pulmonary valvuloplasty at Shahid Rajaie Heart Center in Tehran between 2003 and 2013. Two years after the procedure, the patients were examined by transthoracic echocardiography and parameters related to pulmonary valve and right ventricular condition were reassessed. Among all 271 patients who were initially included into the survey, 37 patients (13.7%) had pulmonary valve gradient 30 to 50 mmHg that included our final targeted population for assessment.

Majority of patients with moderate pulmonic stenosis with gradient of 30 to 50 mmHg benefit from this procedure to achieve gradient less than 30 mmHg in long-term follow-up.

Pulmonary valve stenosis is an abnormal structural condition manifested by subvalvular, valvular, or supravalvular obstructive lesion leading obstruction to the right ventricular outflow tract to the pulmonary arteries (1). This abnormality is characterized by the failure of the valvular leaflets to fuse or less commonly by dysplastic thickening of the valves that is rarely revealed as a rare abnormality or in association with clinical conditions such as Leopard syndrome or Noonan syndrome (2, 3). In mild stages, pulmonary valve stenosis has a good prognosis, however in moderate or severe conditions; stenosis may have a progressing nature requiring further therapeutic and repairing interventions in more than half of the patients because of the increased likelihood of life-threatening atrial or ventricular arrhythmic events (4, 5). In severe pulmonic valve stenosis, such interventions such as balloon or surgical valvulotomy or valvuloplasty have led to excellent outcome (6-8). These interventional approaches can be indicated in cases with exertional dyspnea, angina, syncope, or presyncope or those asymptomatic patients with normal cardiac output, but with transvalvular peak systolic pressure gradient equal to or higher than 30 mmHg (6). In some reports, balloon pulmonary valvuloplasty has been introduced as a selective and the surgery of choice for patients of all ages with moderate to severe pulmonary valve stenosis. During the 1980s and 90s, despite advancing this procedure for selective optional treatment for pulmonary valve stenosis, the usefulness of this technique had not been as well understood (9). Even in recent years, long-term outcome of this procedure remained uncertain. As a new ambiguity, it is unclear whether balloon pulmonary valvuloplasty can effectively reduce pulmonary valvular gradient in those patients with mild to moderate stenosis (10, 11). In the present study, our goal was to prove the hypothesis that balloon pulmonary valvuloplasty could effectively reduce valvular gradient ranged 30 to 50 mmHg to less than 30 mmHg in long-term follow-up of patients who underwent this procedure because of severe pulmonary valve stenosis.

Results were demonstrated as mean ± standard deviation (SD) for quantitative variables and were summarized by absolute frequencies and percentages for categorical variables. Normality of data was analyzed using the Kolmogorov-Smirnoff test. Categorical variables were assessed using Chi-square test or Fisher’s exact test when more than 20% of cells with expected count of less than 5 were observed. Quantitative variables were also compared with t test or Mann U test. The cardiovascular parameters two years after initial evaluation compared to the baseline assessment were tested by paired t test or Wilcoxon test. For the statistical analysis, the statistical software SPSS version 16.0 for windows (SPSS Inc. Released 2007. SPSS for Windows, Version 16.0. Chicago, SPSS Inc.) was used. P values of 0.05 or less were considered statistically significant.

In total, 271 patients (135 men and 136 women, mean age 26.62 ± 12.34 years) were assessed. The mean balloon size used for BPV was 21.25 ± 4.56 cm. The time of procedure was also estimated to be 6.31 ± 4.08. The mean diameter of pulmonary valve annulus was 22.92 ± 6.73. Regarding the severity of pulmonary insufficiency before surgery, 22.1% had no valvular insufficiency (with pure severe pulmonary stenosis), while trivial insufficiency was found in 4.8%, mild in 49.8%, mild to moderate in 13.3%, moderate in 8.9%, moderate to severe in 0.8% and severe in 0.4% of subjects. Assessing cardiovascular parameters after procedure and before that (Table 1) showed significant improvement of right ventricular systolic pressure (P < 0.001), and right ventricular end-diastolic pressure (P < 0.001), while the change in some other indices including pulmonary artery pressure or severity of pulmonary insufficiency remained insignificant.

Table 1. The Change in Cardiovascular Parameters After BVP Compared to Before

As revealed by the multivariate linear regression modeling (Table 2), the change in pulmonary valvular gradient was independent to baseline parameters including gender, age, balloon size or time of procedure, but there was a strong positive association between the change in valvular gradient and initial right ventricular systolic pressure (beta = 0.519, P < 0.001) (Figure 1). Figure 1. The Linear Association Between the Change in Valvular Gradient and Right Ventricular Systolic Pressure

One of the main advantages of valvuloplasty is to significantly reduce transvalvular gradient, however whether valvular gradient ranged 30 to 50 mmHg can adequately be reduced long term after this procedure remains uncertain. The present study could successfully show considerable reduction of pulmonic valvular gradient ranged 30 to 50 mmHg to less than 30 mmHg in about 86% of patients after two years of initial assessment. In other words, this study obviously shows that pulmonary valvuloplasty led to effective long-term gradient reduction both in patients with initial invasive gradients over and under 50 mmHg. In fact, even in those with mild to moderate valvular stenosis with a mild increase in gradient, decreasing gradient can even be predicted in long-term follow-up. This fact could be found in both children and adults. As clearly shown by Witsenburg et al. (12), the continuous wave Doppler gradient dropped down from 61 mmHg to 26 mmHg, but remained unchanged both at early follow-up after 6 months, and 2 years after initial evaluation. In another study by Cheragh et al. (10), pre-peak pulmonic valve gradient decreased from 100.9 mmHg to 31.38 mmHg at once after balloon pulmonic valvuloplasty that also reduced significantly at 18 months after that dropped down to 12.65 mmHg at 12 months and to 18.88 mmHg 18 months later. Reviewing the literature shows a success rate of 37% to 100% in reducing valvular gradient after the procedure (13-15) and our findings are comparable to those reported internationally, but as shown primarily by our observation, for a majority of patients with moderate valvular gradient, this gradient can be reduced to normal range. It has been suggested that patients with moderate pulmonic stenosis and a gradient of 50 to 100 mm Hg who possess symptoms of exercise intolerance will probably benefit from balloon valvuloplasty. Patients with severe pulmonic stenosis, defined as a gradient greater than 100 mm Hg, may benefit from balloon valvuloplasty even without symptoms, because of the significant afterload that the obstructive pulmonary valve places on the right ventricle, but in those with mild valvular gradient (ranged 30 to 50 mmHg), this gradient can be effectively decreased by this procedure. In total, moderate pulmonic stenosis identified by a peak Doppler gradient of 36 to 64 mmHg or peak Doppler gradient of 30 to 50 mmHg can successfully be repaired by the procedure to achieve peak gradient less than 30 mmHg.

In conclusion, balloon pulmonary valvuloplasty can effectively reduce valvular gradient in most patients with pulmonary valve stenosis even in moderate stenotic condition. In other words, a majority of patients with moderate pulmonic stenosis with gradient of 30 to 50 mmHg benefit from this procedure to achieve gradient less than 30 mmHg in long-term follow-up. Nevertheless, residual high valvular gradient can be found in a small number of patients that should be causally assessed.