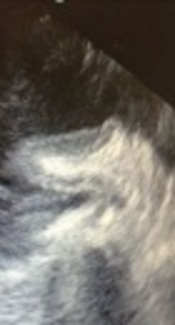 The left atrial appendage (LAA) lies within the confines of the pericardium in close relation to the free wall of the left ventricle. The LAA is long and thin with a narrow base. The LAA is best evaluated by transesophageal echocardiography. Surgeons may ligate the LAA during mitral valve (MV) replacement to remove a potential source of embolism. Unfortunately, a high rate of unsuccessful LAA occlusion has been reported, regardless of the technique employed.

A 57-year-old woman underwent cardiac surgery (mitral valve, aortic valve and tricuspid valve replacement and LAA closure). In post pump intra-operational transesophagial echocardiography (TEE) we detected a hypoechogenic mass in left atrium. It has no interference with mechanical MV prosthesis and pulmonary veins. Because of its new presentation after cardiac surgery, we suggested that it might be invaginated LAA. After confirmation, this complication was treated by pulling it out.

The inversion of LAA is a rare complication. This diagnosis should be considered when a pedunculated mass is encountered in these setting. To prevent this complication, we suggest the use of intraoperative TEE to avoid unnecessary work up and fatal complications.

The left atrial appendage (LAA) lies within the confines of the pericardium and is a structure to decompress left atrium whenever the LA pressure elevate during cardiac cycle (1). This character is owed to the underlying anatomical and histological properties of LAA. The LAA is elongated, thin, tubular, trabeculated, and distensible pouch with a narrow base of origin from the body of the left atrium. Its narrow, sharply pointed shape allows positive identification, although making it a potential source for stasis and thrombus formation in the setting of atrial fibrillation and mitral valve disease. The LAA is frequently multilobulated (2) and have different types of morphologies such as cauliflower, windsock, cactus and chicken wing. The LAA is best evaluated by transesophageal echocardiography (TEE). During mitral valve (MV) surgeries a surgeon may remove this potential source of embolism. Surgical ligation or amputation of the LAA, which was first performed by Madden in 1949, is now the standard of care in patients undergoing mitral valve surgery or as an adjunct to the maze procedure (3) this procedure is often performed without significant morbidity or mortality in patients who are undergoing cardiac surgery for other indications (4).

The 2014 AHA/ACC guidelines suggest that left atrial appendage ligation may be considered in patients with severe mitral stenosis (MS) and recurrent embolic events while on anticoagulation (3).

Despite the absence of data supporting its use and the potential for an incomplete procedure, ligation of the LAA at the time of mitral valve surgery in patients with atrial fibrillation (AF) has now become standard care in many centers with expertise in this technique; it is also part of the Maze procedure (5). Different methods for LAA occlusion are simple neck ligation, purse string techniques, surgical staplers, and endocardial suturing. Given that LAA is adjacent to anatomic structures such as AV groove structures and given that it has a thin, fragile, delicate wall, the technique of amputation may be complicated by bleeding or myocardial ischemia. To prevent such complications, surgeons use autologous pericardium to support and reinforce the area (6). One limitation to surgical LAA ligation is that it might be incomplete as detected by TEE (4, 7, 8) and regardless of the technique employed, a high rate of unsuccessful LAA occlusion has been reported (9).

A 57-year-old woman presented with dyspnea functional class III, AF rhythm, and significant rheumatic valvular heart disease admitted in our cardiovascular department. In preoperative trans esophageal echocardiography mild LV systolic dysfunction and severe smoke in LA and LAA, severe mitral stenosis (MS), moderate mitral regurgitation (MR), thickened tricuspid aortic valve (AV), mild aortic stenosis (AS) moderate to severe aortic regurgitation (AR) and moderate tricuspid regurgitation (TR) revealed. Left atrial appendage was windsock in morphology. The patient was scheduled for mechanical prosthetic aortic and mitral replacement, biologic tricuspid valve replacement and LAA closure. The patient’s heart was de-aired by standard maneuvers after an otherwise uncomplicated procedure. De-airing included manual cardiac agitation and aspiration of the left ventricular vent and aortic root vent. After the procedure, in postoperative trans esophageal echocardiography, a hypoechoic mass mimicking large atrial thrombus with linear echogenicity at center was seen in the left atrium (LA) with size 4 cm × 1.5 cm, the base of the mass was between mitral valve annulus, the entrance of the left upper pulmonary vein and the body of mass was protruded into the left atrium. It has no interference with mechanical MV prosthesis and pulmonary veins (Figure 1A - C). Detection of a new, unusual mass like lesion in LA after cardiac surgery, creates the possibility of these differential diagnosis: neoplasm, clot, foreign body or etc. But because of its new presentation after cardiac surgery, we suggest that it might be invaginated LAA. We showed the image to surgeon. Digital manipulation of LAA and retraction of mass by the surgeon and direct inspection of the heart confirmed the diagnosis of invaginated LAA into the LA. The invaginated LAA reverted to its normal anatomic position through pulling it out by forceps. Normal anatomic feature of LAA was confirmed by TEE examination.

The inversion of LAA is a rare complication. This diagnosis should be considered when a pedunculated mass is encountered in these setting. To prevent this complication, we suggest the use of careful monitoring and intra - operation TEE. It would prevent unnecessary work up after surgery, and treating it during surgery would prevent probable fatal complications. The underlying cause was not fully elucidated but spontaneous invagination due to the fact that negative pressure might be the etiology.

The inversion of LAA is a rare complication after open - heart surgery. It occurs spontaneously or after open ‐ heart surgery (10). Case report of spontaneous LAA inversion due to decrease in left ventricular volume, shortened diastolic time and resulted negative pressure in the setting of supra ventricular tachycardia has been reported in literature (11). Another case report has described, after surgical closure of large subaortic ventricular septal defect with presentation of sudden - onset low cardiac output, immediately in postoperative phase which resulted in death. Based on autopsy findings, LAA intussusception and placement through the mitral valve orifice had been the cause of mortality (12). The possible cause for the intussusception may be excessive negative pressure applied to the left ventricular vent, or digital insertion during the de-airing maneuvers. The sustained intussusception of the LAA, even after weaning from CPB, could have been due to a relatively narrow neck of the LAA (13). LAA invagination could be corrected with digital manipulation during the surgery. Lack of awareness of this entity can result in a misdiagnosis (thrombus, vegetation, neoplasm) and even unnecessary procedures and reoperation. A post - procedure TEE examination can facilitate early detection and rapid correction of this complication.

This diagnosis should be considered when a pedunculated mass with these morphological features is encountered in post operation setting. To prevent this complication, we suggest the use of careful monitoring and intra - operation TEE. It would prevent unnecessary work up after surgery, and treating it during surgery would prevent probable fatal complications like interfering with mitral valve and resulting in sudden cardiac low output syndrome that could be fatal.

Figure 1. A mass like lesion protruded in LA with linear echogenicity at center, size 4 cm × 1.5 cm.

Copyright © 2018, Multidisciplinary Cardiovascular Annals. This is an open-access article distributed under the terms of the Creative Commons Attribution-NonCommercial 4.0 International License (http://creativecommons.org/licenses/by-nc/4.0/) which permits copy and redistribute the material just in noncommercial usages, provided the original work is properly cited.
COMMENTS