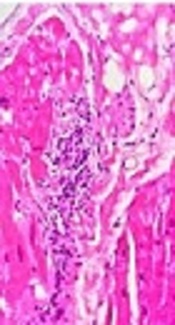 Although giant cell myocarditis (GCM) is a rare, potentially fatal disease but its true prevalence is likely to be underestimated. GCM can lead to progressive heart failure, fatal ventricular arrhythmia and atrio-ventricular block.

The present report describes three cases of biopsy-proven GCM with clinical presentation including arrhythmia and heart failure. All patients were treated with immunosuppressant drugs.

Arrhythmia and symptoms of heart failure with immunosuppression had a relative improvement in three patients.

The basis of its diagnosis is endomyocardial biopsy (EMB) (2). Even with optimal medical care, GCM typically has a bad prognosis (3).

These cases have been reported for the first time in Iran.

All patients have consented to publication of information about them contained in case reports.

A 31-year-old female presented to the medical center with palpitation followed by physical activity. She had a history of syncope one day earlier. She had no fever, history of flu-like illnesses, malaise, chills, chest pain and dyspnea. She also did not mention the past history of any extracardiac diseases, drug use and abuse, family history for sudden cardiac death (SCD) and cardiomyopathy. The first patient’s electrocardiogram (ECG) showed ventricular arrhythmia with a heart rate of 150 and blood pressure 85/50 then it was converted to sinus rhythm by synchronized DC shock (Figure 1A). ECG of sinus rhythm revealed ST-T change in anterolateral leads (Figure 1B). The general physical exam was normal cardiovascular examination after arrhythmia conversion had S4 and mid systolic murmur grade II/VI. Lab data showed ESR: 34 mm/h, anti-CCP (cyclic citrullinated peptide): 9 U/mL, troponin :0.53 ng/mL, other lab data, chest x-ray and abdominal sonography was normal. Echocardiography revealed moderate to severe global left ventricular (LV) dysfunction with estimated ejection fraction (EF): 30% - 35%, mild mitral regurgitation (MR), severe apical and posterior hypokinesia and mild pericardial effusion (PE).

Despite the treatment of arrhythmia, it continued and as a result the patient was treated initially by methyl prednisolone infusion (500 mg) a day in three doses then continuing with 15 mg oral prednisolone and mycophenolate mofetil (MMF) (1 g daily) in addition to metoprolol succinate, spironolactone, lisinopril and amiodarone. Arrhythmia and hospitalization decreased after 12 months of therapy. 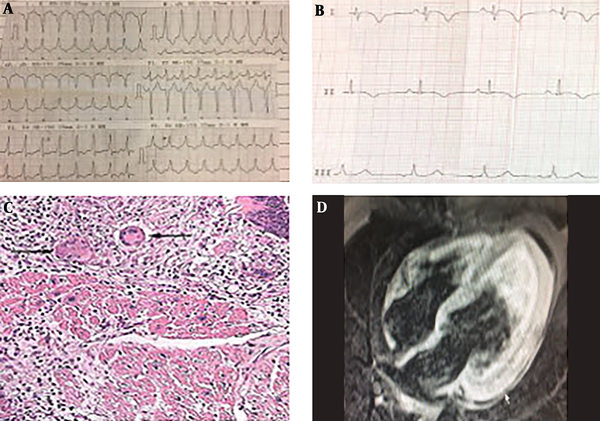 A 45-year-old woman admitted with syncope, chest pain and dyspnea to Rajaie Heart Center. She was in respiratory distress and complete atrio-ventricular block. Heart rate was 45 beat/min and blood pressure was 85/50 mmHg. She was afebrile but she had diaphoresis, cold sweating and weak arterial pulse.

The patient’s LV and RV function partially improved in a few days and CHB have been resolved. The cardiogenic shock was over but patient’s struck thrombocytopenia and sepsis was diagnosed disseminated intravascular coagulation (DIC) and despite broad spectrum antibiotic and platelet infusion, the patient expired with hemothorax and sepsis. 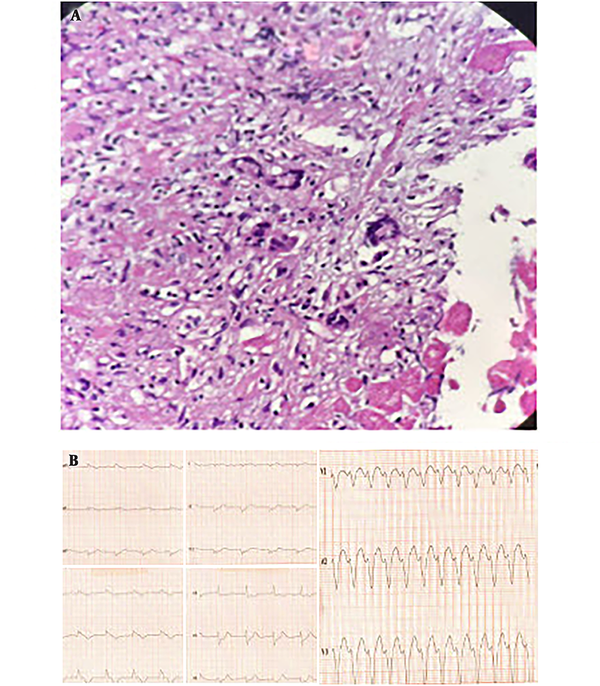 A 55-year-old woman referred with frequent syncope to emergency department in evaluation. Diagnosis of sustain VT was confirmed. She had no symptoms of flu-like illness and chest pain.

Lab data was fine. She did not notice symptoms of heart failure.

Therefore, she underwent coronary angiography which was patent. CMR has revealed myocarditis (Figure 3B) based on Lake Louise criteria (4).

Antiarrhythmic drug (mexiletine and amiodarone) and bisoprolol was started for patient then ICD was implanted.

But frequent ICD shock has happened due to sustain monomorphic VT, so she was referred for VT ablation. Considering the recent positive troponin, cardiomyopathy and frequent VT with medical therapy, EMB was done during the procedure of VT ablation. 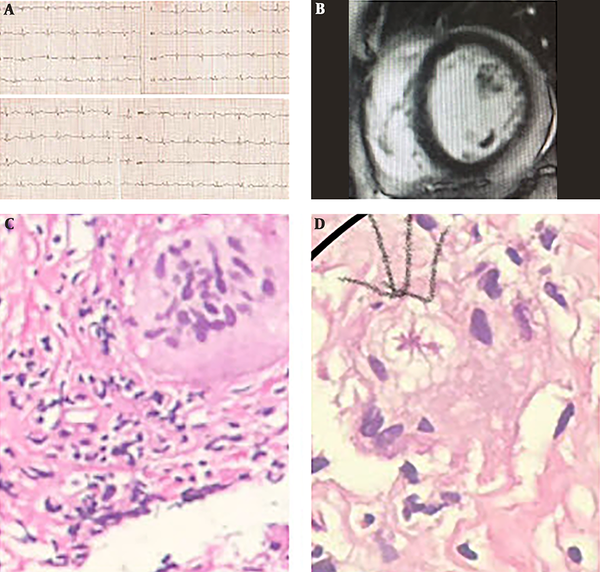 At this point no VT and ICD shock has been repeated so far. LV function was estimated 55%. The patient was underwent left ventricular biopsy that revealed inflammation cores less than the previous sample after 1year (Figure 4). Second EMB did not indicate asteroid body and giant cell. So, cyclosporine was discontinued.

GCM is an underdiagnosed inflammatory myocardial disease all over the world. It has often been diagnosed after death or heart transplantation (5, 6).

Although GCM is known as a rare myocardial disease but its incidence has been reported 0.2% to 5% in EMB based myocarditis (7, 8).

GCM is commonly happening at young and middle-aged adults (1, 9).

In our series, the mean age of patients is 44.3 years that all of whom are women. These characteristics are consistent with previous studies (3, 6, 10).

Clinical diagnosis of GCM especially for middle aged woman should be suspected in the approach to a patient with ventricular arrhythmia and high grade A-V block even without significant LV dysfunction. Importance of GCM differential diagnosis especially with AVB is cardiac sarcoidosis (13, 14).

There are limited data on the use of non-invasive imaging such as cardiac MR and nuclear imaging (15). CMR was done in two of our cases which other than myocardial edema, in the first case, CMR showed a thick layer of myocardial late gadolinium enhancement (LGE) that was extended from sub epicardial to intramural LV. The third patient had LGE (sub endocardium) in inferolateral LV.

A recent report, compared CMR with histology in GCM, in which strain-encoded CMR showed a patchy distribution of LGE affecting all layers of myocardium (15).

Although non-invasive imaging cannot provide a definite distinction between inflammatory cardiomyopathy, but those are (especially CMR) standard references for initial and complementary assessment of myocardial tissue characterization and function (16).

EMB and histologic examination is the gold standard method for the diagnosis of GCM (17). The giant cells are the main characteristic feature of GCM (12). The classic histopathologic view of GCM are diffused myocyte necrosis with inflammatory cell infiltration including eosinophils, lymphocytes, multinucleated giant cells, plasma cells and neutrophils (9, 12, 18, 19).

Myocardial histopathology of the third case revealed giant cells with asteroid body but her imaging and clinical feature did not suggest cardiac sarcoidosis (CS). The pathologic characteristic features of CS to differentiate from GCM include non-necrotizing granuloma with giant cell and intracytoplasmic inclusions such as Schaumann and asteroid bodies (21).

However, the third case has been following for CS presentation. Our second case showed massive myocardial necrosis and severe inflammatory cells infiltration. With due attention to her very poor prognosis, it is possible to consider the relationship between myocardial pathologic view and clinical prognosis.

There are no sufficient data management and follow up GCM (23). Kandolin et al. reported that 26 biopsy GCM diagnosed patients were treated with combined immunosuppression that included steroid (all patients), cyclosporine, mycophenolate mofetil, muromonab, gamma globulin and methotrexate. This report described that two third of patients partially recovered from severe clinical heart failure but continued the susceptibility to ventricular arrhythmia (6).

Several other reports described the efficacy of immunosuppression therapy such as steroid, muromonab, cyclosporin, anti-thymocyte globulin (ATG) and mycophenolate mofetil that can be effective in relative clinical remission of GCM (9, 11, 24, 25).

Our first case was treated with steroid and MMF that achieved partial remission for ventricular arrhythmia.

In the second case, RV and LV functions were relatively recovered with steroid pulse and MMF.

The third patient was improved in the view of myocardial function and ventricular arrhythmia. Of course, arrhythmia ablation has been performed for her. However, it is clear that immunosuppressant drugs can partially control clinical heart failure and arrhythmia (7).

Anti heart-failure drugs (angiotensin-converting enzyme or angiotensin receptor blockers and B-blockers) have been used for our patients according to guidelines (26).

Specific guideline does not exist for re-biopsy in GCM to diagnose and follow up of the treatment and to estimate prognosis (2) but considering the results of the third-case re-biopsy, it is advisable to further research for re-biopsy and left ventricular biopsy in patients with GCM.

It is important to consider especially giant cell myocarditis in tachyarrhythmia and bradyarrhythmia with unknown origin, in particular for young and middle aged patients. Altogether, immunosuppressants can help to manage GCM, but clinical trials are necessary.

Copyright © 2018, Multidisciplinary Cardiovascular Annals. This is an open-access article distributed under the terms of the Creative Commons Attribution-NonCommercial 4.0 International License (http://creativecommons.org/licenses/by-nc/4.0/) which permits copy and redistribute the material just in noncommercial usages, provided the original work is properly cited.
COMMENTS