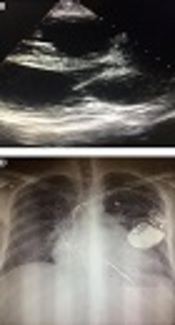 Danon Disease: A Challenging Case with Diagnosis of Hypertrophic Cardiomyopathy

Danon disease is an X-linked dominant glycogen storage disease characterized by cardiomyopathy, skeletal myopathy, and intellectual disability. Danon disease has a rapidly progressive natural course, hence early diagnosis is crucial to achieve a proper management plan. This case concerns a 30-year-old male of Danon disease presenting with symptoms and signs of systolic heart failure, with no intellectual impairment and skeletal muscle involvement at presentation. Thus, he was initially misdiagnosed and managed as idiopathic sarcomeric hypertrophic cardiomyopathy. To the best of our knowledge, this is the first report of Danon disease in Iran, further implicating previous cases overlooked by local cardiologists.

Danon disease (or lysosomal glycogen storage disease type 2B) is a rare, X-linked dominant genetic disorder caused by mutations in the lysosomal associated membrane protein 2 (LAMP2) gene. This results in a deficiency of LAMP2 protein, a component of the lysosomal membrane, causing excessive intra-sarcomeric glycogen accumulation similar to what is observed with acid maltase deficiency; however, acid maltase activity is normal in these patients (1). Danon disease is characterized by cardiac involvement, intellectual disability and skeletal myopathy; although the clinical manifestations can vary and with other organ involvement (1, 2). Classic cardiac involvement in Danon disease is hypertrophic cardiomyopathy, with a reported prevalence of 1% to 33% of Danon disease among hypertrophic cardiomyopathy patients (3-5). Dilated and restrictive cardiomyopathies have been reported less frequently in Danon disease (6).

This case concerns a 30-year-old male presenting with recently developed exertional dyspnea, which was first diagnosed and managed as sarcomeric hypertrophic cardiomyopathy. Deteriorating clinical status, despite optimum heart failure therapy, and the development of progressive proximal muscle weakness over the course of the disease resulted in making the diagnosis of Danon disease, which to the best of our knowledge is the first report of this rare genetic disorder in Iran.

A 30-year-old male was referred to Heart Failure and Transplantation Clinic of Rajaie Cardiovascular Medical and Research Center, Tehran, Iran with recently developed exertional dyspnea (New York Heart Association Functional class ΙΙ - III), without complaining of orthopnea or syncope. His past medical history was unremarkable, in particular for musculoskeletal complaints.

On physical examination, the patient appeared in good general health and his mental and speech status was normal. His temperature was 36.8°C, blood pressure was 100/65 mmHg and pulse rate was 65 beats/minutes and respirations were 20/minutes. On cardiovascular examination, the heart rate and rhythm were regular, and S4 sound was heard. Jugular venous pressure was distended. No peripheral edema, clubbing, or cyanosis was present. His family history was notable for the deaths of his two older brothers, his mother and his sister which were declared to be due to cardiac failure, although he did not have more detailed information. Laboratory test results, including complete blood count, serum electrolytes, serum creatinine level, liver and thyroid function tests, lactate dehydrogenase, creatine phosphokinase and cardiac troponins were within normal ranges. Electrocardiography (ECG) revealed left axis deviation and left bundle branch block (LBBB) with a mild slurred QRS upstroke without short PR interval (Figure 1A). Echocardiography showed a left ventricular ejection fraction (LVEF) of 45%, normal left ventricular (LV) size, mild LV Hypertrophy, severe hypertrophied papillary muscles, and mild mitral and tricuspid regurgitation (Figure 1B). The right ventricular function was normal.

Considering all above, patient was diagnosed with hypertrophic cardiomyopathy (HCM) and carvedilol, lisinopril and furosemide was started for him. An implantable cardioverter defibrillator (ICD) device was also implanted. A few months later, despite using inotrope and high dose diuretics, the patient died due to cardiac pump failure and respiratory infection.

Table 1. Complete Lab Data of Patient After Beginning of Skeletal Myopathy
Table 2. Report of the Genetic Study of Patienta

Danon disease is a rare genetic disorder due to mutations in the lysosomal associated membrane protein 2 (LAMP2) gene, causing a deficiency of LAMP2 protein. The LAMP2 deficiency, as a component of the lysosomal membrane, results in the accumulation of intracellular vacuoles that contain autophagic materials, including glycogen, degenerating mitochondria, lipids and basophilic granules within the cells (7-9). Danon disease is inherited via X-linked dominant inheritance, although the phenotypic expression of LAMP2 deficiency varies.

We described a patient presenting with symptoms and signs of heart failure, initially misdiagnosed as having idiopathic hypertrophic cardiomyopathy. Rapidly deteriorating clinical status, despite receiving standard heart failure treatment, the development of mild muscular myopathy in conjunction of elevated muscle enzymes encouraged us to re-evaluate the patient. After thorough examinations and genetic analysis, we diagnosed the first report of Danon disease in Iran. However, we assume that there might have been other affected patients previously which have not been diagnosed properly and have been managed as idiopathic causes of cardiomyopathies, such as our patient’s older brothers. This highlights the necessity of careful assessment when encountering cardiomyopathy patients, in particular patients with positive family history and patients with rapidly progressive disease and those not responding adequately to standard medications.

The classic clinical trial of Danon disease includes LV hypertrophy, mental retardation, and peripheral myopathy (10). However, a number of cases have been reported with dominant cardiac involvement and no to minimal cognitive or peripheral muscular impairment (4, 11, 12). Similarly, our patient presented with cardiac involvement and normal cognitive function and he had no muscular involvement at presentation; although he developed proximal myopathy later on with disease progression.

The most important prognostic factor in Danon disease is the severity of cardiac involvement (1). Characteristic cardiac manifestations include cardiomyopathy and cardiac electrical abnormality.

Male and female patients have different clinical presentation in terms of type of cardiomyopathy. Men usually present at an earlier age with predominantly hypertrophic cardiomyopathy while women are equally affected with hypertrophic or dilated cardiomyopathy (12). Overall, females have a better long-term prognosis than males; without heart transplantation, men usually die before the age of 25 (1, 13-15). The electrocardiographic abnormalities in Danon disease include voltage criteria consistent with LV hypertrophy, left bundle branch block, a slurred QRS upstroke, short or long PR interval and atrio-ventricular block (16, 17). Ventricular pre-excitation pattern is found in 68% of men and 27% of women (14). Both atrial and ventricular arrhythmias can occur. Arrhythmias account for 50% - 55% of death in Danon disease (1, 15). Considering the conspicuous prevalence of arrhythmia and cardiac arrest, ICD is usually considered for these patients (15-17). Our patient and his affected family members died from advanced heart failure, although he had experienced frequent atrial arrhythmias.

Skeletal myopathy is seen in 80% - 100% of affected males and 33% - 50% of female. Females also have lower serum creatine kinase compared to male patients (10, 15, 17, 18). The muscles in the back, upper arms, shoulders, neck, and thighs are most often involved; however, patients usually retain their ability to walk. Some studies have shown intellectual and cognitive impairment in Danon disease, in particular in men (70% - 100%) (1, 17). Other studies showed that most patients do not have overt mental and intellectual disability, but rather mild cognitive deficits and higher incidence of mood and anxiety disorders (19, 20).

In patients with non-ischemic cardiomyopathy (especially HCM) and/or impaired liver function test and/or muscle weakness with elevated CK and/or pre-excitation’s changes in ECG, glycogen storage diseases, in particular Danon disease should be considered (23).

Cardiac magnetic resonance imaging (MRI) may provide valuable morphological and structural information in patients with Danon disease. However, studies have not demonstrated typical late gadolinium enhancement (LGE) pattern in Danon disease, whether in HCM or in DCM phenotypes. The extent of LGE (fibrosis) may contribute to heart failure, ventricular arrhythmias and poor outcome (24, 25).

Simultaneous endomyocardial and skeletal muscle biopsy might show discordant findings. Vacuolar myopathy in skeletal muscle but not myocardial biopsy and the reciprocal situation has been described (26, 27). It is important to note that excess glycogen is not always visible on a single muscle biopsy (28). Vacuoles with undigested glycogen may be found in other glycogenosis, including protein kinase CGMP-dependent 2 (PRKG2) cardiomyopathy and Fabry’s disease that can have similar presentations to Danon disease (4). The Immunofluorescence and morphometric analysis, immunoblotting and gene expression analyses on biopsy samples can be used for evaluation of LAMP2 deficiency (29). However, genetic mutation analysis of LAMP2 gene can confirm the clinical suspicion (1).

It is not clear whether standard heart failure treatment, including beta-adrenergic receptor blockers, angiotensin-converting enzyme (ACE) inhibitor or angiotensin receptor blocker (ARB) and mineralocorticoid receptor antagonist (MRA) are effective in slowing disease progression and increasing survival in Danon disease. However, beta-blockers are used for patients presenting with HCM phenotype to control arrhythmia; and typical heart failure medication may be attenuated symptoms in DCM subtype. Diuretics can reduce pulmonary congestion and peripheral edema (1, 15). Electrophysiology studies to assess electrical conduction system are warranted in patients presenting with arrhythmias. Early implantation of cardioverter defibrillator should be considered in susceptible individuals to develop life-threatening arrhythmias. Cardiac ablation therapy might also be needed in a subset of patients. Cardiac resynchronization therapy (CRT) is suggested for patients with high grade atrioventricular block (1, 15, 30, 31). As cardiac involvement usually progresses rapidly, cardiac transplantation should be considered at an early stage, in particular in male patients. The survival after heart transplantation is similar to other causes of heart transplantation.

Proximal skeletal myopathy and mental disorder is usually mild and often does not cause serious limitations for cardiac transplantation. Physical therapy can improve muscle weakness (32, 33).

In the series of Samad and Co, 2 out of 3 transplanted patients did not have a good outcome (34) but other studies reported, better outcome was achieved after heart transplantation. This bias can be due to the phenotype- genotype variation and the small number of cases. However, considering the progressive heart failure despite treatment, the transplantation is inevitable and recommended early listing (34, 35).

Other novel therapies including gene therapy, use of human induced pluripotent stem cell-derived cardiomyocytes (iPSC-CMs) and recombinant LAMP2 protein therapy are under investigation (9, 35, 36).

Danon disease is a rare cause of genetic susceptibility to cardiomyopathy with progressive and eventually life-threatening natural course. This case highlights the importance of a careful and thorough assessment of unexplained cardiomyopathies, including genetic counseling, for early detection of genetic causes of cardiomyopathies, particularly in patients with positive family history and in patients with progressive disease despite standard medications. In such circumstances, early diagnosis is crucial in making an appropriate treatment plan and in pursuing proper management strategies.