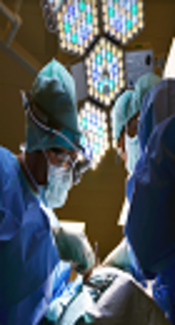 Coronary arteries aneurysm (CAA) is one the rare and life-threatening abnormalities of the cardiovascular system.

Our study aims to present clinical characteristics and surgical results of patients with aneurysm of coronary artery in Iranian population.

This is a retrospective case series of eight patients with aneurismal coronary artery, who underwent surgical repair in an Iranian tertiary referral centre from 2004 - 2014 and were followed up till 2017 (mean follow-up: 8.6 ± 3.8 years). Patients’ demographics, clinical characteristics, past medical histories and surgical data were recorded retrospectively. All data were analyzed by SPSS software (IBM Corp. IBM SPSS Statistics for Windows, version 22.0. Armonk, NY: IBM Corp.).

Overall eight patients with CAA, consisting of 6 (75%) male and mean age of 35.21 ± 23.76 (0.75 - 67) years, were analyzed. Dyspnea and chest pain were the most frequent symptoms among patients (3 (37.5%)). Moreover, hypertension and coronary artery disease (CAD) were the most common comorbidities amongst our subjects. Angiography of patients showed concomitant CAD in 6 (75%) patients including four (50%) three-vessel disease and two (25%) two-vessel disease. Left anterior descending (LAD) was the most prevalent aneurismal coronary artery 4 (50%). Six (75%) patients underwent coronary artery bypass graft (CABG) at the same time due to coronary artery disease. One patient had post operative bleeding and underwent re-operation and 2 patients had pericardial effusion that didn’t require surgical intervention. There was no perioperative MI, respiratory problems, acute kidney insufficiency (AKI), infections and in-hospital or late mortalities in patients after surgery.

Majority of patients diagnosed and treated for CAA, had concomitant coronary artery disease at the time of testing and underwent CABG. There were no peri and post-operative mortality, and all patients showed satisfying outcome. In addition to the benefits of early diagnosis and intervention in prognosis of patients, larger studies are warranted to identify the possible risk factors of this condition to identify those at risk in order to reduce the consequent complications.

Coronary artery aneurysms (CAA) are abnormal dilations along the coronary arteries, known as one of the most life-threatening diseases of the cardiovascular system (1-9). While the etiology of this disorder is not clear, tt has been associated with concomitant atherosclerosis, history of percutaneous coronary intervention (PCI), drug abuse, autoimmune and infectious disorders (3, 5, 7). History of Kawasaki’s disease has also been known to be correlated with the occurrence of CAA and ischemic myocardial infarctions during adulthood secondary to compromised circulation in coronary arteries (4, 7). Surgical intervention is the treatment of choice in patients with CAA refractory to medical therapies (7).

Although, there is a number of literature reviews on this subject, environmental and genetic characteristics of this disease can be unique in different regions, therefore in this study we sought to report a descriptive analysis about clinical characteristics and surgical outcome of patients with CAA, who had undergone surgical intervention in a tertiary referral center in Iran.

This is a retrospective case series of 8 patients with CAA who underwent surgical repair between 2004 to 2014 in a tertiary referral center in Iran and were followed up till 2017 (mean follow-up: 8.6 ± 3.8 years).

This study was approved by Ethics Committee of Iran University of Medical Sciences.

Surgical repair was performed under general anesthesia with median sternotomy approach using cardiopulmonary bypass for all patients. Two techniques were used for repair of aneurysmal section of the coronary arteries based on the location and size of the aneurysm and also surgeons’ preference. For small aneurysms suture ligature of the proximal and distal parts of aneurysm and its related small branches using 5-0 polypropylene sutures (PROLENE® Polypropylene Suture|Ethicon) with or without pledgets. For the large ones, after un-roofing the aneurysm by a longitudinal sharp incision and removing the organized clots and debris the proximal, distal ends and also small branches (including septal branches) were ligated by the same techniques. Concomitant surgeries including coronary artery bypass graft (CABG) were performed according to patients’ pathologies (Table 1).

Descriptive statistics were performed and reported as mean ± standard deviation (median) for continuous variables and frequency (percentage) for categorical variables. P value under 0.05 was considered as statistically significant. All data were analyzed by SPSS software (version 23, IBM Corp).

The result of CXR was normal in all patients, except in one patient (12.5%) that showed increased CT ratio and pulmonary vascular malformations (PVM).

Only one (12.5%) patient had post-operative bleeding and required reoperation. One patient (12.5%) required inotrope use and 3 (37.5%) had blood transfusion. Two patients (25%) had pericardial effusion post surgery, however none of them required surgical intervention. There was no perioperative MI, respiratory problems, acute kidney insufficiency (AKI), infections, in-hospital or late mortality in patients after surgery during our mean follow up time of 8.6 ± 3.8 years.

The result of our study showed dyspnea and chest pain as the most common symptoms among patients. Hypertension and coronary artery disease were the most prevalent comorbidities among patients. The majority of our patients underwent simultaneous CABG with their aneurysmal repair. Only one patient had post operative bleeding that required re-operation. Two patients had pericardial effusion, however none of them required surgical intervention. There was no perioperative MI, respiratory problems, AKI, infections, in-hospital or late mortalities in patients after surgery. All patients showed satisfying outcome after surgery.

CAA is an extremely rare disease amongst the population who undergo cardiovascular surgical intervention with prevalence rate ranging from 1.5% - 6.5% (4, 5, 8, 10). CAA is mostly asymptomatic, however, in symptomatic cases, the most common clinical manifestations are similar to coronary artery disease (CAD) (8, 11). Dyspnea and chest pain were the most prevalent symptoms among our patients. In some cases presence of murmur has been reported (11). Only one patient in our study revealed palpable thrill.

CAD has been known as the most notable comorbidity in most cases of CAA (1, 2, 11). This has been supported by a recent review by Boyer et al. (5) describing CAD as the most common etiology of CAA. This is very similar to our findings showing concomitant CAD in the majority of patients who underwent CABG during aneurysmal repair procedure. Additionally, studies have discussed the association of CAA and hypertension (11). This hypothesis can be notable since Hypertension was one of the prevalent comorbidities beside CAD among our patients.

As shown in most studies, CAA has a wide range of signs and symptoms and a single symptom can not be diagnosed based on one symptom. Inokuchi et al. (4) reported strawberry tongue an atypical presentation of CCA secondary to Kawasaki disease. Therefore, diagnosis of this disease can be quite challenging in patients without CAD, since angiographic testing is rarely done on patients without CAD symptoms.

There is no consensus on the best approach for treatment of CAA, and the treatment options mostly depends on patients underlying condition and clinical presentation (11).

A prospective corono-angiography registry of patients with CAA, showed 3.1% mortality peri-admission and 20.7% mortality within median follow-up time of 52 months (27 - 84). While the most frequent procedure was percutaneous revascularization, surgical intervention was performed in 12.9% of the patients. Significant bleeding was reported in 10.1%, arterial thromboembolic events in 1.8%, and stroke in 3.9%. Death rate was 0% in simple percutaneous transluminal coronary angioplasty (PTCA), 35% in conventional stent, 7.8% in drug-eluting stent and 21.2% in surgical method, while, The MACE (death and/or un-stable angina and/or myocardial infarction and/or heart failure and/or stroke) was reported in 60%, 50%, 37.3% and 19.2% of the reported procedures, respectively (12). Our result demonstrated no perioperative MI, respiratory problems, AKI, infections, in-hospital or late mortalities after surgery.

The main limitation of our study was the retrospective design and small sample size of the patients.

Aneurysm of the coronary artery remains of the most life-threatening abnormalities of the vascular system. Although the prevalence of such disease is low, its diagnosis is extremely difficult without CAD symptoms. Majority of patients diagnosed and treated for CAA, also manifested CAD at the time of testing. While several studies have discussed different pathophysiology of CAA, the exact mechanism of this disease is still unclear. In addition to the benefits of early diagnosis in prognosis of patients, larger studies are warranted to identify the possible risk factors of this condition to identify those at risk in order to reduce the consequent complications. Majority of patients diagnosed and treated for CAA in our study had concomitant coronary artery disease at the time of testing and underwent CABG. There was no perioperative MI, respiratory problems, AKI, infections, in-hospital or late mortality in patients after surgery. All patients showed satisfying outcome after surgery.