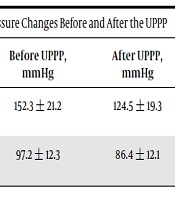 how to cite: Seyed Resuli A. The Results of Surgical Treatment of Hypertension in Mild and Moderate Obstructive Sleep Apnea Syndrome. Multidiscip Cardio Annal.10(2):e91283. doi: 10.5812/mca.91283.

Obstructive sleep apnea syndrome (OSAS) is the most common respiratory disorder related to sleep. It is characterized by recurrent upper airway obstruction episodes and a decrease in arterial oxygen saturation during sleep. The most important complications of OSAS are related to the cardiovascular system. Hypertension (30% - 60%) is the leading cause of these complications.

This study aimed to investigate the removal of upper airway obstruction through surgical operations in the tension treatment of OSAS patients with hypertension.

This retrospective study included 42 patients with hypertension from 2008 to 2017 who were diagnosed with OSAS based on the result of polysomnogram (PSG) test. All the patients were examined in detail in otorhinolaryngology and cardiology clinics, their endoscopic and imaging evaluations were carried out and their blood pressure was followed-up. Preoperative and postoperative arterial blood pressure values for upper airway obstruction were statistically analyzed.

Removal of upper airway obstruction through a surgical operation was found to play an important role in the blood pressure treatment of OSAS patients with hypertension.

Sedentary life style has been developing rapidly in recent years throughout the world along with cigarette and alcohol use, obesity and aging (2). OSAS prevalence is 4% in men and 2% in women around the world (3). However, this rate is 36% in diabetic patients, 63% in patients with resistant hypertension, and 71% in patients with congestive heart failure and in those cerebro-vascular stroke is in acute phase (4-8).

Polysomnography (PSG) is the gold standard for the diagnosis of OSAS (14). Continuous positive airway pressure (CPAP) device is recommended for the treatment (15, 16), but patients with moderate and mild OSAS who cannot tolerate it are performed surgery. The main principle in the surgical treatment of OSAS is to remove the obstruction in the upper airway. Uvulopalatopharyngoplasty (UPPP) is most common surgical procedure that performed for treatment of OSAS (17, 18).

Oral apparatus is recommended as an alternative for patients with mild to moderate OSAS who cannot tolerate CPAP. Oral applications are performed patient-specific and function to reduce upper airway collapse and enlarge the airway during sleep (14, 19). Weight loss and positional sleep techniques may be regarded as additional medical measures. Unfortunately, most patients do not benefit from medical treatment. Fifty percent of the patients cannot tolerate the CPAP appliance or cannot use as effective as it should be (20). Surgical treatment of OSAS is a good alternative for patients who have not benefited from medical treatments. The anatomical parts to be treated surgically in OSAS include the nose, nasal cavity, nasopharynx, soft palate, hard palate, oral cavity, oropharynx, hypopharynx, craniofacial and neck.

This study aimed to investigate how hypertension (HT), which is the most common cardiovascular disease, is affected through surgical treatment in patients with OSAS.

The patients who have persistant HT in spite of taking three or more antihypertensive drugs at optimal doses between 2008 - 2017 by the cardiology clinic of our hospital have been included in the study and consulted by the ear-nose-throat clinic. The cases have been evaluated by means of detailed ENT examination, fiberoptic laryngoscopy, muller’s maneuver, lateral cephalogram, computed tomography and magnetic resonance imaging. The patients diagnosed with OSAS who have been found to have retropalatal and nasal stenosis have been diagnosed with PSG and 42 cases selected from the patients who have not accepted oral apparatus-CPAP treatment and undergone UPPP operation performed by ourselves have been retrospectively included in the study. (In our study, an all-night polysomnography has been performed with Compumedics computerized system. Polysomnography includes 2-channel electroencephalography (EEG), 2-channel electrooculography (EOG), 1-channel submental muscle electromyography (EMG), 2 channel EMG placed on both anterior tibial muscle, a nasal cannula for 1-channel oronasal airflow measurement, 2-channel inductive plethysmography to demonstrate respiratory effort in the thorax and abdomen and 1 channel pulse oximetry recording measuring the arterial oxyhemoglobin saturation (SpO2) with finger probe. The parameters used, sleep stages and respiratory scoring have been performed according to the standards determined by AASM (22). Patients with AHI between 5 and 14 have been diagnosed to have mild OSAS, patients with 15 - 29 to have moderate OSAS, and patients with AHI > 30 to have a severe OSAS).

The patients’ blood pressure assessment has been performed with a manual mercury sphygmomanometer in the sitting position on the 1st - 2nd months before, and on the 4th - 6th months after the surgery in the form of three consecutive sessions after 5 minute resting periods (23).

The analysis of the study was done in SPSS 20.00 for windows package program. Homogenity of the groups were assessed using the ‘Mann-Whitney U-test’ and their correlations were evaluated using Pearson test. In our study, a significance level of P < 0.05 was applied.

All patients who participated in our study were informed and their consent was obtained.

Table 1. Arterial Blood Pressure Changes Before and After the UPPP

There was a significant decrease in systolic and diastolic arterial blood pressure as a result of the UPPS carried out for removal of upper airway obstruction of the patients with OSAS.

OSAS is characterized by recurrent respiratory obstruction due to collapse of the upper airway during sleep. It is more common among males who are between 45 - 65 years old. In the present study, the mean age of the patients was 52.3 years, and 81% of them were male.

By affecting somatic and autonomic nervous system, OSAS causes adverse effects in the functions of respiratory, cardiovascular, gastrointestinal, endocrine, renal and sexual systems. Its most important side effects occur in the cardiovascular system. In OSAS, the most important causes of mortality and morbidity are complications of cardiovascular system (8-10, 25). Upper airway obstruction leading to OSAS also causes a significant increase in intrathoracic negative pressure. This increases catecholamine release, venous return to the heart and left ventricular afterload. This negative intrathoracic pressure occurring during apnea causes hypertension and other cardiac complications (26-30).

Hypoxia occurring during apnea induces carotid chemoreceptors and leads to catecholamine discharge and vasocostriction. In addition, pulmonary vasoconstriction and pulmonary hypertension may also result in due to alveolar hypoxia. Recurrent hypoxia attacks during sleep cause acute elevations in pulmonary artery pressure (31, 32). Another cause that leads to catecholamine discharges is “arousal” response that stops apnea. It was shown in a study that catecholamine levels in the blood and urine of the patients with OSAS decreased after CPAP treatment (33).

All these pathological mechanisms cause hypertension to be the most common cardiovascular system complication in OSAS. Hypertension is seen in 30% - 60% of patients with OSAS (11). The relationship between OSAS and hypertension has been shown in many studies. In a study, Lavie et al. observed hypertension in 45.3% of the patients with OSAS. In another study, OSAS was found in 2943 patients out of 6132 who had suspected OSAS, and the incidence of hypertension was 62.2% among them (34, 35).

UPPP was conducted in 1981 by Fujita in order to relieve retropalatal obstruction (anatomical narrowing of the soft palate and uvula) on patients with OSAS (36, 37). In this application, the inferior part of the uvula and soft palate are resected after tonsillectomy. Tonsil plica and the soft palate mucosa in the excised region are mutually sutured.

In the present study, UPPP and septoplasty were conducted to detect upper airway obstruction at the nasal and retropalatal levels as a result of the evaluation of 42 OSAS patients with resistant hypertension. The mean preoperative systolic and diastolic blood pressure levels were 152.3 ± 21.2 and 97.2 ± 12.3 mmHg, respectively. Their postoperative systolic and diastolic arterial blood pressure levels were found to be 124.5 ± 19.3 and 86.4 ± 12.1 mmHg, respectively. This decrease in arterial blood pressure was significant.

Consequently, removal of upper respiratory tract obstruction through surgical operations such as UPPP was found to play an important role in the treatment of patients with mild and/or moderate OSAS and resistant hypertension.

Copyright © 2019, Multidisciplinary Cardiovascular Annals. This is an open-access article distributed under the terms of the Creative Commons Attribution-NonCommercial 4.0 International License (http://creativecommons.org/licenses/by-nc/4.0/) which permits copy and redistribute the material just in noncommercial usages, provided the original work is properly cited.
download pdf 118.84 KB Get Permission (article level) Import into EndNote Import into BibTex
Number of Comments: 0