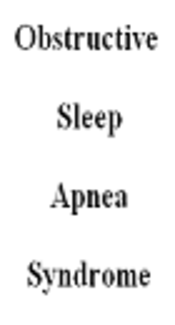 Obstructive sleep apnea syndrome (OSAS) is the most common respiratory disorder related to sleep. It is characterized by recurrent upper airway obstruction episodes and hypoxemia attacks during sleep. Cardiovascular complications are rather frequent in OSAS. This compilation study aimed to show cardiovascular pathologies occurring during OSAS in detail and emphasize the need of treating OSAS during the treatment of these pathologies

Obstructive sleep apnea syndrome (OSAS) is a sleep disorder characterized by the halt of breathing as a result of repetitive complete (apne) or incomplete (hypopnea) obstruction of the upper airway, and hypoxia attacks during sleep (1). Apnea is a temporary stop of breathing for at least 10 seconds during sleep. Hypopnea is partial obstruction of air flow and is not a temporary stop of breathing (30% reduction in breath amplitude, 4% reduction of oxygen saturation or 50% reduction in breath amplitude and 3% reduction of oxygen saturation for more than 10 seconds). The number of apnea-hypopne episodes per hour is called apnea-hpopnea index (AHI). As International Clinical Sleep Disorders -3 (AASM); based on AHI and oxygen saturation, severity of OSAS is classified as: (i) mild (AHI is 5 - 15 and oxygen saturation is 85% - 95%), (ii) moderate (AHI is 15 - 30 and oxygen saturation is 65% - 84%), and (iii) severe (AHI is > 30 and oxygen saturation is < 64%) (2). OSAS incidence is increasing rapidly all around the world as a result of sedentary life style, smoking, alcohol use, obesity and aging. OSAS prevalence is 34% in middle-aged men and 17% in middle-aged women (3). Although OSAS is common disease, its complications are not well known. Clinical findings and complications of OSAS vary. Among the primary complications of OSAS are cardio-vascular problems (hypertension, ischemic heart disease, pulmonary hypertension, heart failure, arrhythmia), neuro-psychological problems (stroke, epilepsy, headache, memory loss, anxiety, deceleration in decision-making ability, weakness, unwillingness, personality and behavior disorders), nephrological problems (nocturnal enuresis, proteinuria) and endocrine problems (loss of libido, impotence, menstrual disorder, hypothyroidism, metabolic syndrome) (4-7).

The most important side effects of OSAS are related to the cardiovascular system (8, 9). Systemic arterial hypertension (30% - 60%), pulmonary hypertension (20% - 30%), coronary artery disease (20% - 30%) and congestive heart failure (5% - 10%) are among the leading ones (10, 11). Cerebrovascular diseases due to OSAS are proportional to the effect of the cardiovascular system. Arrhythmia, high blood pressure, perfusion disorder and thrombus formation, development of cerebrovascular events are important reasons (12).

The effect of OSAS on cardiovascular system occurs in three stages. Stage I: The beginning of apnea, which is characterized by mild hypoxia and normal heart rate. Stage II: The late stage of apnea where hypoxia, heart rate, systolic and diastolic blood pressure increase significantly, and cardiac output decreases. Stage III: The end of apnea in which arousal (transition to sudden alertness during sleep) occurs, oxygen saturation increases with the onset of respiration, and heart rate and blood pressure reach the highest level (9, 13).

Upper airway obstruction that leads to OSAS also causes a significant increase in intrathoracic negative pressure. This increases catecholamine release, venous return to the heart and left ventricular post-load. This negative intrathoracic pressure increase during apnea causes hypertension and other cardiac complications (14, 15). In addition, catecholamine discharges and vasocostriction develop as a result of carotid chemoreceptors being stimulated by hypoxia occurring during apnea (16, 17).

Among patients with OSAS, 30% - 50% have hypertension and its severity increases in parallel with the severity of OSAS. The cause of hypertension in nearly 30% of the patients diagnosed with idiopathic hypertension was thought to have resulted from OSAS. Especially, morning tension is higher than evening tension in OSAS. Rhythm change in blood pressure is associated with apnea episodes in these patients. Only nocturnal hypertension attacks occur in mild OSAS, whereas daytime hypertension is accompanied in severe OSAS. Studies have showed that presence of OSAS is a risk factor for hypertension alone and that hypertension significantly decreases through OSAS treatment. Silverberg et al. reported that there was a significant improvement in daily blood pressure of the patients who were treated using continuous positive airway pressure (CPAP).

As a result of the increased sympathetic activation and vascular dysfunction, rhythmic increases in blood pressure can reach up to 20% in apnea episodes. Temporal elevations in systemic blood pressure as a result of hypoxemia, hypercapneic acidosis, intrathoracic pressure changes, arousal and reflex arterial vasoconstriction caused by sympathetic activity during or after apnea episodes decrease to normal levels with the restart of breathing. Contrary to normal people, no decrease is observed in blood pressure of OSAS patients during the night. Systemic blood pressure can reach the peak stage and be as high as being over 200/110 mmHg at the phase of arousal development and restart of breathing during apnea episodes which are recurrent and are characterized by profound oxygen desaturation. Increased sympathetic activation in patients with OSAS is observed not only while they sleep but also when they are awake. This shows that the changes occurring as a result of apnea during sleep also cause changes in the sensitivity of chemoreceptors and baroreceptors during wakefulness.

Studies conducted in recent years have showed that there is a relationship between OSAS and peripheral changes in peripheral vessels and dysfunction. One of these studies found nitric oxide-dependent vascular dilatation in OSAS patients. It was found in another study that when the synthesis of nitric oxide was pharmacologically inhibited, vasoconstriction increased in OSAS patients compared to those in the control group. As a result, it was suggested that vascular dysfunction might occur in OSAS patients and that this was not limited to reduction of nitric oxide release and dilator capacity, but also there could be a constructive effect. Although the cause of the constructive effect is not completely known, it is explained by the increase in sympathetic activation.

Other endothelium-mediated mediators associated with OSAS are adenosine and ekosanoids. Plasma adenosine levels were found to have increased in patients with OSAS. Krieger et al. showed that the ratio of 6-keto-prostaglandin PGF1α, which is a prostacyclin metabolite in urine, thromboxane B2/, thromboxane A2 metabolite in the urine, decreased in OSAS patients during the night and increased with CPAP treatment. Another interesting relationship was that endothelin-1 (ET-1), which is a potent vasoconstrictor, was 2 - 3 times higher in OSAS patients than in the control group. However, there was no change in their levels with CPAP treatment.

The first findings show that the renal excretion of ET-1 decreased in OSAS patients. Studies showed that the release of atrial natriuretic peptide (ANP) and the excretion of urine and sodium during sleep increased in OSAS patients. ANP suppresses the renin-angiotensin-aldosterone system and plasma renin activity decreases. These changes cause a decrease in blood volume, in other words, a decrease in blood pressure. Therefore, it is thought that it is a stabilizer for the increase of blood pressure, and in a sense, plays a protective role in OSAS patients. Using OSAS therapy, ANP levels return to normal, diuresis and natriuresis decrease, and renin and aldosterone release increases.

Several studies showed that OSAS is a serious risk factor for coronary artery disease. Many risk factors for OSAS and atherosclerosis (obesity, age, male sex, metabolic syndrome, smoking, increase in CRP levels and insulin resistance) are mutual. Hypoxia occurring in OSAS leads to both endothelial dysfunction and LDL oxidation due to oxidative stress. In addition, an increase has been shown in the levels of CRP, fibrinogen and interleukin-6 levels, each of which is known to be a risk factor for atherosclerosis in OSAS patients.

Conducting polysomnography (PSG), Mooe et al. found that 37% of men and 30% of women had OSAS in patients who were diagnosed with coronary artery disease using angiography. Ischemic changes were observed in the ECG even in those who did not have previous history of coronary artery disease during the PSG. St depression is relatively frequent in OSAS patients and is decreased with CPAP therapy.

In a study conducted by Kohler et al. to investigate whether CPAP treatment rehabilitated vascular functions in patients with minimally symptomatic OSAS, they randomized a group of 253 patients with OSAS with minimal symptoms to CPAP treatment and standard care groups for 6 months and measured the arterial stiffness in 208 patients and endothelial functions with brachial artery dependent flow-mediated dilatation (FMD) method in 64 patients (augmentation index: AIx) by evaluating sleep status with Epworth sleepiness scale (ESS). In this study, it has been found that CPAP treatment does not have a significant effect on arterial stiffening (AIx, -1.4%; 95% CI, -3.6 to + 0.9%; P = 0.23) according to the standard care group, but has improved endothelial functions (FMD, + 2.1%; 95% CI, +1.0 to + 3.2%; P = 0.0001) and has decreased day time somnolence (ESS, -2.2; 95% CI, -3.0 to -1.5; P = 0.0001). Researchers have stated that the highest level of correction on FMD has been found in patients using CPAP at night > 4/s (P = 0.013) and minimal symptomatic OSAS could be a risk factor for cardiovascular functions (34-41).

Inspirium during apnea in OSAS increases intrathoracic negative pressure and increases venous blood return to the right heart. The overload in the right ventricle compresses the left ventricle and prevents it from being filled with enough blood. Combined with bradycardia during apnea, low stroke volume decreases cardiac output by 40% in average. In addition, cardiac afterload increases due to high negative intrathoracic pressure and this increases myocardial oxygen demand. The workload of the heart muscle increases, causing myocardial hypertrophy. Hypoxemia disrupts contraction ability of myocardium whose oxygen demand increased over time, which is characterized as heart failure. In a study, OSAS patients were found to have a larger left ventricular mass than the control group did. It was found in another study that 50% of the patients with OSAS had left ventricular hypertrophy and 20% had right ventricular hypertrophy (10, 18, 19, 21, 42-44).

Pulmonary arterial pressure is stable during sleep in normal people. However, in OSAS patients, pulmonary vasoconstriction, pulmonary pressure increase and pulmonary hypertension (PHT) develop due to alveolar hypoxia occurring during apnea episodes. Prevalence of PHT was reported to be 10% - 20% in mild OSAS patients and 50% in moderate to severe OSAS patients. PHT is not persistent in moderate OSAS patients and it regresses with treatment. Although there are differences between individuals, pulmonary arterial pressure can be as high as 80/50 mmHg, and the highest values are observed in the REM period where hypoxemia is the deepest. The rhythmic changes in pulmonary artery pressure are parallel to the changes in systemic blood pressure. These changes result from both the effects of inspiratory effort for closed airway on cardiopulmonary balance and pulmonary hypoxic vasoconstriction.

PHT is faster in OSAS and chronic obstructive pulmonary disease (overlap syndrome) together.

PHT and right heart failure may be regressed using OSAS therapy. However, patients with irreversible right heart failure and cor pulmonale clinical features are those with end stage apnea. Unfortunately, this group of patients usually do not respond to aggressive medical and surgical treatment (5-7, 9, 45-47).

OSAS is rapidly increasing all around the world as a result of sedentary life style, smoking, alcohol use, obesity and aging. In parallel to OSAS, cardiovascular complications such as ischemic heart disease, arrhythmia and heart failure hypertension increases caused by this syndrome are also increasing.

Copyright © 2019, Multidisciplinary Cardiovascular Annals. This is an open-access article distributed under the terms of the Creative Commons Attribution-NonCommercial 4.0 International License (http://creativecommons.org/licenses/by-nc/4.0/) which permits copy and redistribute the material just in noncommercial usages, provided the original work is properly cited.
download pdf 117.13 KB Get Permission (article level) Import into EndNote Import into BibTex
Number of Comments: 0