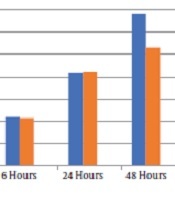 This randomized clinical trial was carried out so as to discover the efficacy of both ɛ-aminocaproic acid (Caproamin Fides®) and tranexamic acid (Transamin®) among high risk patients in primary coronary artery bypass grafting surgery.

From December 2010 to January 2013, 100 consecutive high-risk adult patients undergoing CABG at Rajaie Cardiovascular Medical & Research Center, Tehran, Iran were included in this randomized double-blinded study. Patients who had a past history of, coagulation disorders and allergy reactions to both Caproamin Fides® and Transamin® were excluded. One group of patients received 150 mg/kg Caproamin Fides at the beginning of surgical incision and an additional 1 gr/h during operation (group 1). The second group were administered transamin with a primary dose of 10 mg/kg infusion being coincident with surgical incision (group 2). Then, patients were followed by their blood transfusion volumes, mediastinal bleeding and postoperative complications.

Cardiopulmonary bypass surgery is associated with significant blood loss. This could be serious enough leading to either blood transfusion or re-exploration (1). On the other hand platelet dysfunction is one of the main causes of bleeding after cardiopulmonary bypass (2). Therefore transfusion of blood products plays a major role in postoperative bleeding management. However, this strategy may provoke serious adverse effects similar to ABO blood group mismatch, anaphylactic reactions and infection transmission. Even transfusion of 1 - 2 units of packed red blood cells may increase patient’s morbidity and mortality (3). A former study in Rajaie Cardiovascular Medical and Research Center, Tehran, Iran showed almost 97% of surgical patients received at least one packed red blood cell in their post-op period which was considerable (4). So as to reduce transfusion numbers and its negative outcomes, several techniques have been used in the field of cardiac surgery such as hemostatic local agents. A study applied TachoSil surgical patch on elective cardiac surgeries which resulted in a significant reduction in blood transfusion requirement (5). Additionally, using rotational thromboelastometry before surgery and after heparin reversal is helpful to indicate high risk patients for post-op bleeding (6). In case of antifibrinolytic medications, aprotinin, epsilon aminocaproic acid and tranexamic acid have been introduced to reduce the additional post surgery hemorrhage. Since aprotinin caused a higher rate of renal failure, myocardial infarction and sudden cardiac death, its usage is already limited (7). However recent studies demonstrate aprotinin minimal impact on long term survival of patients (8).

Aminocaproic acid, and tranexamic acid are synthetic lysine analogues that inhibit plasminogen-fibrin binding. Therefore, prescribing them in the middle of open heart surgeries may be helpful in controlling post-operative bleeding after cardiopulmonary bypass surgeries (9). However, tranexamic acid is reported to be a more efficient drug with a longer half-life and stronger plasminogen binding which has more sustained anti-fibrinolytic effect when is compared with aminocaproic acid (10). Various studies have been held to show the efficacy of aminocaproic and tranexamic acid in controlling post-operative bleeding but the revealed results are still controversial (11-14).

This randomized clinical trial was carried out in order to discover the efficacy of both Caproamin Fides® and Transamin® among high risk patients in primary coronary artery bypass grafting (CABG).

Patients having two of following conditions were enrolled in our trial; age > 60, diabetes mellitus, renal failure, chronic obstructive pulmonary disease, morbid obesity (BMI > 40) or history of myocardial Infarction. The main exclusion criteria are defined as positive past history of bleeding or coagulative disorders, hepatic failure, death in less than 24 hours, and known allergic reactions caused by used medications in our study. Eligible patients via block randomization done by a computer-generated random number list were categorized to receive either ɛ-aminocaproic acid (Caproamin Fides®, 5 mg/10cc, Lab Fides S.A, LTD Barcelona, Spain, n = 50) or tranexamic acid (Transamin®, 500 mg/5cc, DAIICHI SANKYO Co, LTD Japan, n = 50) during their pre-operative period. Allocation sequence was concealed from the researcher, executive staff and participants in sealed and opaque envelopes. Blinding maintained by emphasizing to staff and patients that the used fibrinolytic medications are equally effective. Then, patients in one group received 150 mg/kg Caproamin Fides at the beginning of surgical incision and additional 1 g/h during operation. Infusions were discontinued after weaning off bypass. The second group were administered transamin with a primary dose of 10 mg/kg infusion being coincident with surgical incision. The medication dose was adjusted by 0.5 - 2 mg/kg/h with patients’ Creatinine level. Then transamin maintenance dose was prescribed as 2 mg/kg/h. The study design clinical principle is shown in Figure 1. The surgical team including surgeon, cardiac anesthesiologists, perfusionists and intensive care unit nurses were blind to the study groups. Non-executive nursing staff was responsible for preparing the study medications in equivalent volumes of 5 mL syringes with a coded label. Patients were monitored intraoperative with standard American Society of Anesthesiologists noninvasive monitors, intra-arterial catheters, and pulmonary artery catheters. Unfractionated heparin (3 mg/kg) was administered initially and additional heparin, as required, was administered during CPB to maintain the activated coagulation time higher than 400 seconds. An oxygenator was primed with 1000 - 1500 mL of lactated Ringer’s solution containing 5,000 units of heparin. Flows of 2.4 L.min-1.m2 were obtained with a roller pump. Mild systemic hypothermia (between 32° and 34°C) was maintained during aortic cross-clamping, and the myocardium was preserved by the intermittent infusion of blood cardioplegia into the aortic root. After weaning off CPB, the effects of heparin were reversed with protamine sulfate (3 mg/kg) to reach the pre-operative ACT level. Blood remaining in the CPB circuit after separation was collected and infused back to the patient. Packed red blood cells were administered to maintain hematocrit between 20 and 24 percent during CPB and hemoglobin concentrations of around 8 g/dL after CPB; as long as patients had stable hemodynamic status.

Hemoglobin concentration was kept above 8 g/dL in hemodynamic stable patients and above 10 g/dL in patients with debilitating chronic heart failure and chronic obstructive pulmonary disease.

All analyses were conducted by statistical package for social sciences (SPSS) software, version 18 (SPSS, Chicago, IL). Normality of all data was initially assessed using the Kolmogorov-Smirnov test. Data are presented as mean ± SD for normally-distributed continuous variables and as median ± interquartile range (IQR) for those without normal distribution. Categorical data are shown as numbers (percentage). Categorical data were compared by the Chi-square test, quantitative variables by the Student’s t-test, the Manne-Whitney test and the Kruskale Wallis test, as appropriate. All P values were two-tailed and P < 0.05 was considered statistically significant.

One-hundred patients including 79 (79%) male and 21 (21%) female with a mean age of 66.43 ± 6.97 years were enrolled in the study. The two study groups were well-matched in respect to all preoperative baseline characteristics and comorbidities, except for the prevalence of obesity which was higher in Caproamin Fides group (P = 0.053). Sixteen percent of patients in group 1 and 14% of group 2 had concomitant procedure. The preoperative characteristics of the study population are presented in Table 1. A, The incidence of Packed Cell; B, Fresh frozen plasma (FFP); and C, Platelet transfusion in both intraoperative or postoperative periods

The overall mortality rate was 2%. Two patients died which cause of death was noted as low cardiac output in one patient and multi-organ failure following respiratory infection in another.

Hemostasis and bleeding control is a matter of concern for cardiac surgeons while it threats surgical patients in their post-op period. Antifibrinolytic agents have recently been used in cardiac surgeries to control post-op patients’ blood loss. Our former study in 2012 compared and assessed the safety and efficacy of both Caproamin Fides and transamin in low risk candidates for elective coronary artery revascularization (10). Quite contrary, the current practice was designed to make comparison between these two suitable antifibrinolytic in high risk patients undergoing elective CABG.

This study showed, both Caproamin Fides and transamin are acceptable alternatives of aprotinin in cardiac surgery patients. However, a low rate of blood product transfusion after surgery, was much more considerable when it comes to transamin. In spite of the lower transfusion rate in patients, the average of post-op mediastinal hemorrhage was slightly higher in patients receiving Group 1 (625cc vs. 400cc in 48hours).

Khair et al. meta-analysis including 268 RCTs, revealed the efficacy of Tranexamic acid prescription in cardiac surgeries. In patients without history of thromboembolism, coagulopathies and allergic reactions Tranexamic acid did not increase any adverse events in patients’ post-op period (17).

In our current study, patients receiving transamin at the initiation of surgery, had a trivial risk of re-exploration (P value = 0.049). Additionally, the number of concomitant procedures were high and more complex in this group. transamin did not increase the risk of post-operative Myocardial Infarction (P value = 0.078). No cerebral thromboembolic events were noted by either Caproamin Fides or transamin. Hospitalization and ICU stay was almost similar between the two groups of patients (10 ± 3 days in Caproamin Fides, 11 ± 5 in transamin).

Our background study demonstrated the superiority of Caproamin Fides rather than transamin in blood transfusion reduction in low risk patients both in their critical care period and in surgical units (P value = 0.001 and P value < 0.001). Moreover, mediastinal bleeding in the first 24 hours was noteworthy lower in patients receiving Caproamin Fides (P value < 0.001). Conversely, pericardial effusion occurred more in patients receiving transamin. There was no statistical differences between the antifibrinolytic in post-op MI rate (P value = 0.49). The duration of ICU stay was not different between two groups (P value = 0.31) (10).

In the present study, we did not include any relevant complications induced by medications. Post-op MI was not assessed with angiography. As Tranexamic acid is cheaper and widely available, it seems logical to use it in high risk cardiac surgeries in case of post-op bleeding management. However, some authors recommend a higher dosage for Tranexamic acid prescription.

Caproamin Fides and transamin are similarly effective in post-op bleeding management adult patients after high risk CABGs and they could be used as an acceptable alternative of aprotinin. Tranexamic acid seems to be more effective in reducing blood product transfusion after cardiac surgeries without increasing the MACCE rates.

Copyright © 2019, Multidisciplinary Cardiovascular Annals. This is an open-access article distributed under the terms of the Creative Commons Attribution-NonCommercial 4.0 International License (http://creativecommons.org/licenses/by-nc/4.0/) which permits copy and redistribute the material just in noncommercial usages, provided the original work is properly cited.
download pdf 149.36 KB Get Permission (article level) Import into EndNote Import into BibTex
Number of Comments: 0