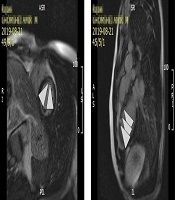 how to cite: Alizadehasl A, Zohrian F, Hashemimanesh M R, Pouraliakbar H , Mohamadifar A, et al. Left Ventricular Thrombus as a Cause of Recurrent Episodes of Transient Ischemic Attack While on Rivaroxaban in a Patient with Hyperhomocysteinemia. Multidiscip Cardio Annal.11(1):e98698. doi: 10.5812/mca.98698.

Thrombus formation is an important prognostic factor in all cardiovascular diseases. Early diagnosis and treatment of intra-cardiac thrombus is critical. When a patient presents with cardiac thrombus, not only cardiac disorders but also other diseases such as malignancies, thrombophilia, rheumatologic disorders and hypercoagulable state should be considered. While regarding various hypercoagulable conditions, hyperhomocysteinemia should be evaluated. In this case report we report a case of left ventricular (LV) thrombosis in a patient with hyperhomocysteinemia.

We report a 30-year-old male with a history of deep vein thrombosis (DVT) the previous year who referred to us for further evaluation one week after an acute episode of right sided sensorimotor hemiparesis and dizziness. The symptoms disappeared over a 24-hour period without any sequelae. He had another episode of transient ischemic attack (TIA) in which he experienced speech disturbance. He has also had cigarette smoking in his habitual history. The patient was placed on Enoxaparin 80 mg BID. After two weeks of follow up, echocardiography revealed significant resolving thrombus measured 1.55 cm in length and 0.57cm in width during 2 weeks (Figure 4). He was discharged after we were satisfied that the repeated international normalized ratio (INR) values were within the therapeutic range (1, 2). Folic acid and vitamin B12 (100 - 500 mg/day) was prescribed. LV thrombus is a serious diagnosis that can be reported in myocardial infarction (3), various types of cardiomyopathies (1, 2), and myocarditis (4). It can also be presented in case of systemic inflammation and hypercoagulable state (5). Left ventricular thrombus is commonly observed in patients with myocardial infarction with systolic dysfunction, but it is difficult to diagnose when such situation occurs in a patient without a history of coronary artery disease and normal ventricular function (6).

There is an increased risk of thrombus formation in myocarditis due to inflammation and stasis secondary to the decreased systolic function. Viral myocarditis leads to a hypercoagulable state due to an increase in myocardial tissue factor. In myocarditis thrombophilia is the cause of thrombus formation and the most important risk factors are MTFHR (C677T) gene mutation and hyperhomocystenemia (7). The incidence of homocystinuria all over the world varies between 1 in 50000 and 1 in 200000 (8). Ucar et al. (9) reported that hypercoagulable state such as FV Leiden, prothrombin 20210 and MTHFR gene mutations play no role in left ventricular thrombus formation in myocardial infarction. However, in another study hyperhomocysteinemia is an independent risk factor for myocardial thrombosis in myocardial infarction (10). It is essential to consider homocysteinemia as an important differential diagnosis in patients with cardiac thrombosis. Left ventricular thrombus formation has also been reported in patients with normal left ventricular dimensions and systolic function due to hypercoagulable states such as raised homocysteine level (11). Studies have shown that increased levels of homocysteine are associated with increased risk of heart attack and stroke (12). High levels of homocysteine are associated with low levels of vitamins B6, B12 and folate and also in chronic renal diseases (12). Hyperhomocysteinemia leads to endothelial cell damage, reduction in flexibility of vessels, and alters the process of hemostasis (11). It is suggested to perform thrombectomy in order to reduce cardiovascular risk along with proper anticoagulation and administration of vitamin B12, vitamin B6 and folate regardless of the levels before treatment.

In this case report thrombus formation can be explained by previous inflammation (myocarditis) and hypercoagulable state due to hyperhomocysteinemia. So, high degree of suspicion of cardiac source is essential in any patient referred with repeated episodes of TIA or cerebrovascular accident even with normal ventricular function.

Copyright © 2020, Multidisciplinary Cardiovascular Annals. This is an open-access article distributed under the terms of the Creative Commons Attribution-NonCommercial 4.0 International License (http://creativecommons.org/licenses/by-nc/4.0/) which permits copy and redistribute the material just in noncommercial usages, provided the original work is properly cited.
download pdf 2.94 MB Get Permission (article level) Import into EndNote Import into BibTex
Number of Comments: 0