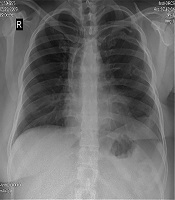 Central venous access is commonly performed in the care of critically ill patients, for administration of repeated drug treatments. This routine procedure has multiple complications such as catheter malposition, migration, obstruction, infection, thrombosis and catheter fraction. We must recognize, consider and be able to manage these complications. We report a successful endovascular technique using a snare for retrieving broken venous port in a 36-year-old female.

Fracture of a central venous catheter is very catastrophic and has been attributed to several factors such as prolonged mechanical force acting on the catheter, and forceful removal or insertion of the catheter (1). Embolization of fractured central venous catheter is a serious and rare complication. Catheter fragments may cause complications such as cardiac perforation, arrhythmias, sepsis and pulmonary embolism (2). We report a successful endovascular technique using a snare for retrieving broken venous port in a 36-year-old female.

We report a 36-year-old female with a history of Hodgkin’s lymphoma 10 years ago and breast cancer 4 years ago who had received chemotherapy and radiotherapy. A peripherally inserted central venous port was used for chemotherapy since 10 years ago. The catheter had accidentally broken 8 months ago during an attempt to percutaneously retrieve the catheter. The patient had intermittent high grade fevers and referred to our center for extraction of the broken catheter. Transthoracic and trans-esophageal echocardiography revealed that the distal tip of the catheter fragment was at the level of junction superior vena cava (SVC) to right atrium (RA) causing turbulences and narrowing with 3 mmHg gradient at proximal part of superior vena cava (SVC), catheter was thickened at proximal portion (0.55 cm) but more distal parts seemed to have normal thickness, there was also a 1 cm linear tissue-texture hypermobile linear density attached to the tip of the catheter which could be either vegetation or thrombosis, no other mass was visualized (Figures 2 and 3). The patient was treated with vancomycin 1 gr stat and BID and ampi sulbactam 3g IV stat and TDS, and after that percutaneous trans catheter retrieval technique via right femoral vein was chosen to be performed. The procedure was performed under mild sedation and fluoroscopic guidance. Injection in right and left subclavian, jugular and SVC revealed that the catheter was lodged at the junction of superior vena cava (SVC) to right atrium (RA). A 12 - 20 mm in diameter snare was advanced to proximal part of the catheter near the lodged site. During the procedure increasing forces released the catheter and the catheter fragment and snare were carefully pulled back via femoral sheath (Figures 4-6). Catheter fragment and snare were carefully pulled back via femoral sheath Injection in left subclavian and SVC revealed no extravasation of contrast from veins. No complication occurred during the interventional procedure. Control chest radiograph after removal of the catheter

Transthoracic and transesophageal echocardiography after removal of catheter and antibiotic therapy revealed normal findings and there were no residual mass or vegetation.

Her foreign body culture was staphylococcus aureus coagulase negative which was sensitive to linezolid and amikacin, so the patient was discharged with linezolid 600 mg BID and recommended to return to the clinic after one week.

Delayed complications of venous access devices are spontaneous intravascular fracture of the catheter, catheter dislocation and embolization, and spontaneous migration and thrombosis of the internal jugular vein (1). Catheter fracture with or without embolization is a serious and rare complication in adult patients (3). If a catheter fracture occurs, the broken catheter will migrate distally along the blood stream and finally lodge in the superior vena cava, the right atrium, the right ventricle, the main pulmonary artery or its branches (1). The reported rate of intravenous catheter fracture is around 0.1% (4). Patients with a fractured catheter may remain asymptomatic or have shortness of breath, chest pain and even syncope (2). Diagnosis is often made by routine chest radiography (2). The mechanism of catheter fracture has largely been attributed to mechanical shearing forces acting on the catheter over a prolonged period (2).

Fracture of central venous port is a rare but serious condition that must be recognized and managed promptly. Early detection of the complication is crucial for the management. A chest radiography is very useful for early detection. Early removal of the catheter fragment is recommended.

Copyright © 2020, Multidisciplinary Cardiovascular Annals. This is an open-access article distributed under the terms of the Creative Commons Attribution-NonCommercial 4.0 International License (http://creativecommons.org/licenses/by-nc/4.0/) which permits copy and redistribute the material just in noncommercial usages, provided the original work is properly cited.
download pdf 6.05 MB Get Permission (article level) Import into EndNote Import into BibTex
Number of Comments: 0