Effect of Integrated Neuromuscular Inhibition Technique in the Management of Piriformis Syndrome: A Case Report 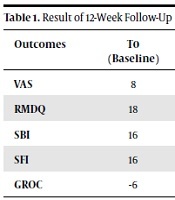 A 40-year-old man presented with a complaint of right buttock pain which radiated to the ipsilateral lower limb. The patient was diagnosed as having PS. The treatment of the patient included INIT followed by stretching exercises for 6-weeks. Outcome measurements included visual analogue scale (VAS), Rolland-Morris disability questionnaire (RMDQ), Sciatica bothersome index (SBI), Sciatica frequency index (SFI), and global rating of change scale (GROC) and were assessed at baseline (T0), at 3 (T1) and 6-weeks (T2) of intervention, and then at 12-weeks (T3) follow-up.

At 12-weeks follow-up (T3), the outcomes indicated improvement in all symptoms (VAS = 0, RMDQ = 0, SBI = 0, SFI = 0, and GROC = +7). Integrated neuromuscular inhibition technique is effective in the management of a patient with piriformis syndrome.

Piriformis syndrome (PS) is one of the most commonly misdiagnosed neuromuscular conditions characterized by buttock pain which radiates down the ipsilateral lower extremity (1, 2). Studies (3, 4) have indicated that about 6% of individuals who are diagnosed as having low back pain actually have PS and misdiagnosis can lead to chronic somatic dysfunctions and/or lower limb radiculopathy (4).

Piriformis syndrome is managed using many treatment options including pharmacology, physical therapy, injection therapy and surgical decompression (5). However, just like other somatic dysfunctions, PS has no known best effective management and there is evidence (6) to suggest that new treatment options are urgently warranted.

Integrated neuromuscular inhibition technique (INIT) is gradually gaining awareness in the manual therapy profession for the management of somatic dysfunctions (7). It was developed by Chaitow et al. (8) as a treatment method involving a combination of muscle energy technique (MET) and positional release technique (PRT). According to Chaitow et al., INIT may produce the most effective approach to treating trigger points and should be delivered in a single coordinated manner. INIT has been shown to be effective in the management of non-specific neck pain.

Even though randomized controlled trials have indicated the effects of MET (9, 10) and PRT (11, 12) in the management of PS, there is a lack of evidence to suggest integrating these techniques in a single coordinated manner. For the first time, this study examined the effect of INIT in a patient diagnosed as having piriformis syndrome.

A 40-year-old man with no episodes of previous back injuries wakened with pain in his right buttock area. The pain was described as sharp and tingling in nature and radiating down the right leg and anterolateral border of the foot. The patient had no history of a fall or lifting heavy objects but reported prolonged sitting (more than 8 hours) during office work. The pain was so severe that the patient had to stop coming to work for two days and was prescribed some medications by his family physician. Four days later (after the onset of pain), the patient noticed that his right buttock muscles were pulling and tender in nature and the medications were not reducing his pain. The patient withdrew all his medications and visited our physiotherapy center (Federal Medical Center, Nguru, Yobe State, Nigeria) for further management.

Upon arrival to physiotherapy, palpatory examination indicated active trigger points (TrPs) at the middle fibers of the piriformis muscle around the lateral two-thirds of the right buttock. The TrPs were also noted around the trochanteric attachment of the piriformis muscle and also along the right gluteal fold. The digital compression test did not reveal any back pain. Passive straight leg raise (SLR) on the right lower limb produced pain at the back of the leg at 35°. Passive SLR with neck flexion and ankle dorsiflexion elicited much pain. Coughing and sneezing did not provoke leg symptoms as did not back flexion and extension. Other assessments included: (a) decreased right hip internal rotation, (b) tonic external rotation of the right hip, and (c) the presence of three positive tests (Beatty test, Freiberg test, and FAIR test). The patient was diagnosed as having piriformis syndrome. The diagnosis was based on the previously established diagnostic criteria (3, 4). The patient was assessed using; the visual analogue scale (VAS), Rolland-Morris disability questionnaire (RMDQ), Sciatica bothersome index (SBI), Sciatica frequency index (SFI), and global rating of change scale (GROC).

The patient was managed using INIT. In addition, stretching exercises were also administered to the patient. The full intervention protocol is described below:

The patient was placed in a prone position with the hip flexed to approximately 60° to 90° and abducted. The treated leg (right leg) was allowed to hang off the table with the knee bent and resting on the thigh of the physiotherapist who was seated on the tender point side. The tender point or trigger point (TrP) was palpated in the fibers of the piriformis muscle from its attachment around the lateral angle of the sacrum to the greater trochanter of the femur. Once the most dominant tender point or fasciculation (or both) was determined, the therapist then used one hand to apply a light intermittent or sustained pressure with the pad(s) of the finger(s) at the location of the trigger point and maintain the pressure for 20 - 60 seconds. Fine-tuning involving hip internal or external rotation by the therapist other hand based on the location of the TrP was applied to maintain the position of most ease (position of less sensitivity). When referred or local pain started to reduce in intensity, the compression treatment stopped and then the patient was instructed to use no more than 20% of available strength to attempt to take the limb away from the restriction barrier, while the therapist maintained his hands positions and held the patient’s limb firmly to create isometric contraction which was maintained for 7 to 10 seconds. Following the contraction, a reduction in tone was achieved in the piriformis and then the hypertonic or fibrotic fibers were further stretched and lengthened using Ruddy’s reciprocal antagonist facilitation (RRAF) method (8, 13). The patient was instructed to push the limb against the therapist resistance for 20 counts in 10 seconds, starting and stopping, without movement taking place, but a rather repetitive contraction and relaxation. These contractions activated the hip flexors while producing an automatic reciprocal inhibition of the piriformis. Three repetitions were performed for 10 minutes at two sessions a week for 6-weeks.

The patient was asked to stand upright and lean forward with the hands resting on the wall. The patient was then asked to stretch the lower leg by placing one foot behind and resting on the heel. If the heel contacted the floor easily, then the knee is flexed forward toward the wall to increase the stretch on the soleus. The upper body was swung left and right during bends to make sure that the whole hamstring muscle fibers get activated and stretched (15). This exercise was performed for two minutes at two sessions a week for six 6-weeks.

Outcomes were measured at baseline (T0) and at 3 (T1) and 6 (T2) weeks of intervention. The patient was discharged home after 6-weeks of intervention and placed on stretching exercises as a home regimen. The patient was then followed-up for an additional 6-weeks to track improvement in symptoms. At 12-weeks follow-up (T3), the outcomes indicated improvement in all symptoms (VAS = 0, RMDQ = 0, SBI = 0, SFI = 0, GROC = +7) (see Table 1).

INIT was developed by Chaitow et al. (8) as an extension of techniques that are used to ameliorate somatic dysfunction. According to Chaitow et al. (8), INIT involves the combination of two manual therapy techniques (muscle energy technique - MET) and positional release technique - PRT) which must be delivered in a single coordinated manner to achieve the most effective approach to treating trigger points (TrPs) and tissue dysfunctions.

Positional release technique has been investigated as one of the most effective manual therapy techniques for the management of PS (11, 12). This technique involves the identification of TrPs, followed by the application of ischemic compression to reproduce the nociceptive response (16). The limb is then placed in such a way as to minimize the tension in the affected muscle and subsequently, the painful TrP is deactivated (17). The possible underlying effect of TrP ischemic compression was documented by a study (18) which indicated that pain and muscle spasm relief from ischemic compression may be due to the reactive hyperemia produced in the area of the lesion, or from the spinal reflex arc.

On the other hand, MET has also been indicated in the management of PS (9, 10). The concept behind using MET is to achieve sufficient muscle relaxation and lengthening either by using post-isometric relation (PIR) or reciprocal inhibition (RI). Post-isometric relation refers to the immediate decrease in the tone of the agonist muscles following isometric contractions that happens due to the effects of stretch receptors (Golgi tendon organs) which react to excessive stretching of the muscles by counteracting longer muscle contractions. This is a natural self-defense mechanism and has a lengthening effect due to the immediate relaxation of the whole muscle under tension (10).

On the other hand, RI refers to the inhibition of the antagonist muscles due to isometric contractions of the agonist muscles which happens due to stretch receptors within the muscle spindles which work to maintain steady muscle length by providing information on the nature of the contraction (10). When stretched out, muscle spindles produce nerve impulses, which augment contractions and thus prevent excessive stretching (10). Better relief in pain and/or spasm in the muscles housing TrPs is achieved when MET is applied while the muscle is in a stretched position (10). It has been thought that all the effects of INIT due to the administration of MET and PRT have significantly assisted in the restoration of pathological changes of the piriformis muscle and also lessened compressive forces on the sciatic nerve.

This study indicated that INIT is effective in the management of a patient with piriformis syndrome. This study is a case report and cannot be generalized. It is recommended that randomized clinical trials (RCTs) may be conducted to further elucidate the findings of this study.