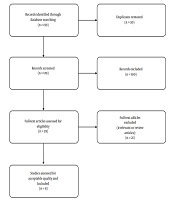 Oral squamous cell carcinoma (OSCC) is the most common oral cancer. In recent decades, numerous studies have focused on the effects of new herbal and natural bioactive substances or pharmaceutical products on different cancer types. Some investigations have shown that anthocyanins can inhibit carcinogenesis in various ways, and some others focused on the effects of anthocyanins on squamous cell carcinoma (SCC).

An electronic search of the literature was carried out in PubMed, Web of Science, and Scopus databases using the keywords “anthocyanins” and “oral cancer” or “oral squamous cell carcinoma”. Articles relevant to our topic (except for review articles) were included in this study.

The reviewed articles showed the inhibitory and suppressive effects of anthocyanins on OSCC, which were exerted by inhibiting NF-κB, p-Akt/PI3k, and JAK/STAT3 pathways, the induction of caspase-1 and caspase-3 overexpression, pyroptosis, mitochondrial-mediated apoptosis, and reduction of expression and production of matrix metalloproteinases and urokinase-type plasminogen activator.

Based on the results, the anti-proliferative and apoptotic effects of anthocyanins on OSCC were dominant. Their antimetastatic effect was also reported. Therefore, anthocyanins seem to be promising natural compounds for the prevention and treatment of OSCC. In vivo studies and clinical trials are recommended to further confirm these results.

Oral squamous cell carcinoma (OSCC) is a serious, growing health problem in many parts of the world. Along with pharyngeal cancer, oral cancer is the sixth most common cancer worldwide. Although local tumor control has improved in recent decades, the 5-year survival rate of patients remains at 50%, which is discouraging (1). Moreover, OSCC accounts for 90% of oral cancers and has been independently linked to tobacco use and alcohol consumption, with a synergistic effect between these two risk factors (2).

The OSCC survivors usually suffer from severe functional problems, depression, nutritional deficiencies, and cancer recurrence after a few years. Therefore, it is imperative to find complementary and alternative treatments to prevent and treat OSCC. Epidemiological studies have shown that consumption of fruits and vegetables (such as orange, mandarin, and white radish) has protective effects against OSCC because they contain high amounts of vitamins, antioxidants, minerals, fiber, and phenolic compounds with anti-cancer properties (1, 3). In recent years, cancer prevention using natural nutritional substances has shown promising results due to the non-toxicity and cost-effectiveness of these substances in long-term use, especially in patients at high risk of cancer. Evidence shows that 80% of the world's population prefers traditional herbal medicine to meet their primary health needs (4).

The efficacy of medicinal plants for prevention and even treatment of cancer has been well documented. Besides, methods have been designed to identify the constituents of these natural products and to test their efficacy for possible use in cancer treatment (3). Sulforaphane (5), quercetin (6), curcumin (7, 8), green tea (9, 10), honokiol (11), and shikonin (12, 13) are among the preventive natural substances studied in the recent years.

Anthocyanins are a subset of natural phenolic compounds. There are over 250 natural anthocyanins. This group of polyphenols is of great importance because of their medical applications. During the past decade, the beneficial effects of anthocyanins, such as their anti-inflammatory, antioxidant, and chemo-protective properties, have been confirmed. Also, it has been reported that they decrease the risk of cardiovascular diseases and cancers (14, 15). Anthocyanins are water-soluble pigments and secondary metabolites widely found in vegetables, fruits, and some plants. Anthocyanins mainly accumulate in the vacuoles of plant cells and are responsible for the red, purple, or blue colors of leaves, petals, seeds, and fruits; these colors are affected by the acidity and enzymes. In traditional Chinese medicine, black rice is believed to be rich in anthocyanins and can strengthen the immune system, inhibit tumor growth, destruct cancer cells, and minimize the damage caused by chemotherapy, and thus, has a positive efficacy as a complementary therapy (16).

Anthocyanins can inhibit vascular endothelial growth factor (VEGF) and decrease the risk of metastasis of hepatocellular cancer (HT29) as well as breast cancer (MCF-7). They also promote apoptosis of melanoma cells and colorectal cancer cells via the Ras/PI3K pathway (17). However, recent studies have shown that berry fruits such as blueberry, strawberry, raspberry, and cranberry inhibit carcinogenesis on various cell lines of human oral, breast, colon, and prostate cancers (18). Evidence shows that if the antioxidants present in anthocyanins are sufficiently supplied by food, especially in people who are occupationally exposed to carcinogens and chemicals, they can prevent the development of various diseases (19). An antioxidant-rich diet strengthens and rebuilds the immune system. Recently, certain anthocyanins were reported to be even stronger than vitamin E or C in terms of anti-oxidative properties (19, 20).

Malik et al. (21) showed that the anthocyanin extract induced the cell cycle arrest in colon cancer cell line, but lower than 10% growth inhibition occurred in normal colon cells at the highest concentration of the extract. In an animal study, no biological effects, such as mortality, weight loss, or ocular problems, were observed within 90 days following the consumption of anthocyanin-rich extracts, but long-term studies are still lacking to confirm the safety and lack of cytotoxicity of anthocyanin for normal cells. Anthocyanins are weak inhibitors of the 3A4 enzymatic isoform compared with other polyphenols and are less likely to inhibit cyp2D6; thus, knowledge regarding concomitant drug considerations needs to be acquired through further studies (22).

A study on cancer cells treated with a combination of anthocyanins showed that the use of malvidin and pelargonidin (MAL/PEL, two types of anthocyanins) at lower doses rather than mitoxantrone (MXT, from chemotherapeutic drugs) increased the toxicity against cancer cells. This was specifically true about MAL + MXT. Also, MXT treatment, in combination with MAL/PEL decreased MXT-induced cytotoxicity and protected the natural cells (23).

In another study, berberine as a constituent of Berberis vulgaris, which contains anthocyanins, in combination with cisplatin of equal concentration, showed a greater anti-growth effect on HeLa cells, a human cell line from cervical cancer, and was also less toxic to healthy cells (24). Topical application of anthocyanin-rich bio-adhesive gel on the gingival mucosa containing 10% black raspberry raised detectable levels of anthocyanins in the saliva, confirming the finding that flavonoids are easily secreted into the saliva and enter the oral environment (25).

The effects of anthocyanins on a variety of cancer types are comprised of their anti-mutagenesis effect, induction of differentiation, inhibition of proliferation (by modulating signal transduction pathways, stimulating cell cycle arrest, and inducing apoptosis of cancer cells), anti-invasion effect, anti-metastasis effect, lowering the resistance of cancer cells to medications, and increasing their susceptibility to chemotherapy.

The present study aimed to review the available literature on the effects of anthocyanins on OSCC to introduce a promising factor for the management of this type of cancer. It also aimed to identify the effective mechanisms of anthocyanins to pave the way for future studies on this topic and help patients who are at risk or suffering from OSCC.

An electronic search of the literature was carried out in the Web of Science, PubMed, and Scopus databases using the keywords “anthocyanins”, “oral cancer” and “oral squamous cell carcinoma”. The search was limited to English articles published until November 4, 2019 (Figure 1). The retrieved articles were reviewed by two reviewers, and those using standard cell lines and animal studies were included. Studies examining the levels of biomarkers approved for OSCC detection at the different protein or genetic levels (DNA or RNA), before-and-after studies, case-control studies with matched case and control groups, and studies with confounders were excluded. 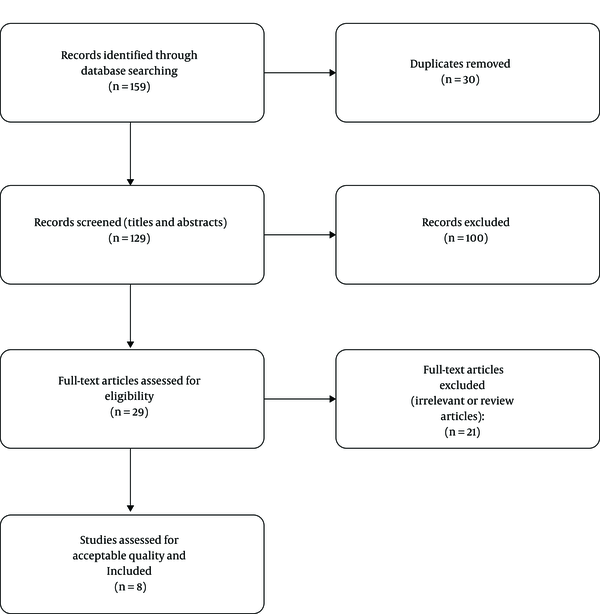 The study flowchart is shown.

Table 1. Characteristics of the Articles Reviewed in This Studya

Of eight reviewed articles, six were in vitro experimental studies on SCC cell lines, and two were animal studies. Based on these studies, the effects of anthocyanins can be divided into the following categories:

5.1. Prevention of Proliferation and Suppression of Growth and Angiogenesis

Four of the reviewed articles showed the preventive effects of anthocyanins on proliferation, and their suppressive function against growth and angiogenesis. In these studies, anthocyanins present in cranberry, strawberry, black raspberry, and black rice were evaluated. They showed that when the cranberry extract was enriched in polyphenolic content by eliminating fruit sugars and organic acids, its anti-proliferative activity increased, and a combination of anthocyanin, proanthocyanidin, and flavonol glycoside had greater anti-proliferative properties against oral cancer than single extracts (26). It was also shown that strawberry (containing a significant percentage of anthocyanins) inhibited dimethylbenz[a]anthracene-induced oral cancer in hamsters by suppressing cell proliferation, RAS/RAF/ERK-dependent oxidative damage, and VEGF-dependent angiogenesis (1).

Another study showed that black rice anthocyanin suppressed cell proliferation by inhibiting NF-κB and p-Akt/pI3k pathways (13). It was strongly confirmed that blueberry and malvidin have inhibitory effects on the JAK/STAT3 pathway and prevent the proliferation of cancer cells (27).

One clinical trial showed that in patients with pre-malignant oral lesions, topical berry gel application can regulate the expression of oral intraepithelial neoplastic genes and suppress the factors involved in growth factor recycling and inhibition of apoptosis. This treatment also decreased the COX2 protein vascular density in the superficial connective tissue and genes related to keratinocyte differentiation (30).

Five articles assessed the efficacy of anthocyanins for the induction of apoptosis. It has been reported that the pure consumption of cranberry (by eliminating sugar) can also induce apoptosis in oral cancer cells (26).

High concentrations of proanthocyanidin, which has cancer-preventing properties, are found in fruits such as cranberries and grapes. Another study showed that the proliferation of SCC25 and CAL27 cell lines was inhibited in a dose-dependent manner in the presence of cranberry and grapeseed extracts. Also, the level of key factors regulating apoptosis, namely caspase-8 and caspase-2, simultaneously increased in response to these treatments. These observations not only show that cranberries and grapes inhibit the proliferation of cancer cells but also suggest that the mechanism of this inhibition may be through the induction of key regulators of apoptosis in these cell lines (31).

Anthocyanins promote cell death in OSCC by activating caspase-1 and eventual pyroptosis (28). Anthocyanin extract from Bridelia retusa can have a toxic effect on OSCC, which is due to its regulatory effect on the cell cycle and induction of apoptosis through overexpression of the caspase-3 gene in the SCC25 cell line (4). Additionally, in vitro and in vivo experiments have shown that blueberry and malvidin induce mitochondrial-mediated apoptosis in oral cancer cells (27, 32-34).

5.3. Suppression of Invasion and Metastasis

Two articles demonstrated the effect of black rice’s anthocyanins on suppression of invasion and metastasis. A study by Ming-Jan Fan et al. on black rice showed that the anthocyanins present in black rice significantly inhibited the metastasis and invasion of Cal27 cells. This was achieved by inhibiting the activity of matrix metalloproteinases and NF-κB through decreasing the activity of PI3K/Akt signaling pathways (16). The major anthocyanins derived from black rice inhibit the invasion and motility of SCC-4 cells by decreasing the expression and production of matrix metalloproteinases and urokinase-type plasminogen activator (13).

According to our review, the effects of anthocyanins on OSCC cells can be divided into three major groups of anti-proliferative, apoptotic, and antimetastatic effects. Anthocyanins are available, efficient, and safe, natural compounds for the prevention and treatment of OSCC. Considering the promising effects of anthocyanins on OSCC and their bioavailability, further studies, particularly clinical trials, are required on their efficacy for cancer treatment.

The authors would like to thank Nafiseh Sheikhbahaei for her cooperation in the conduction of this study.