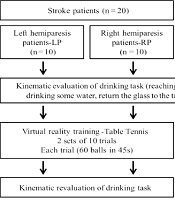 Given that stroke is the cause of several neurological impairments, it is necessary to evaluate interventions that can improve patients' motor performance and functionality.

This study aimed to evaluate the motor learning transfer of a training program using a virtual table tennis game. We hypothesized that playing the virtual game may improve the performance of stroke patients in a functional activity (drinking from a glass). Moreover, this virtual reality training may have different effects according to the brain injury side.

A non-randomized controlled study was performed. Sampling was by convenience. Evaluation and revaluation of a drinking from a glass task were conducted through kinematic analysis (transfer test). The training was carried out with XBOX 360 table tennis game (20 attempts). Performance (number of hits) in the game and average angular velocity of the drinking task were analyzed by ANOVA.

The results suggest that the virtual game has clinical potential in the motor learning transfer process to a functional activity in the real world, mainly for patients with right brain injury.

Stroke-related motor impairments do not allow the patient to accurately perform coordinated movements, which significantly affects upper limb use in basic activities of daily living (ADL) (e.g., eating, drinking, dressing, grooming) (1). Impaired movement velocity is an important cause of disability, since it is related to the neuromuscular reaction triggered by the central nervous system in response to environmental demands (2).

Virtual reality (VR) games have been used for upper limb rehabilitation in stroke patients to promote multisensory, motor, and cognitive stimulation through an interactive and motivational environment (4). Training in a virtual environment aims to transfer the skills acquired there to the real world (5). The transfer of improved function to ADL performance is an important aspect to consider in post-stroke rehabilitation (6).

The transfer of learning effects in VR to real environments is inconclusive, with less favorable results for non-immersive systems (users experience the virtual environment as observers and interact with it using devices that do not fully encompass sensory perceptions, resulting in a lesser sense of immersion in the virtual world) and more favorable results for systems with a higher level of immersion (users interact more with the environment and the computer-generated stimuli and providing visual, auditory, and haptic sensation, enabling individuals to feel immersed in the virtual environment) (6, 7). The laterality of the injury was investigated to determine its influence on the motor learning process in virtual reality training for upper limb rehabilitation of stroke patients (8). However, this functional hemispheric specialization was not studied in the transfer of learning from the virtual to the real world.

In this context, the aim of this study was to evaluate the motor learning transfer of a training program using a virtual table tennis game. Our hypothesis was that playing a virtual tennis game may improve the performance of stroke patients in an upper limb functional activity (drinking from a glass). Moreover, this VR training may have different effects according to the brain injury side.

This is a non-randomized controlled study which was approved by the Research Ethics Committee of the Federal University of Rio Grande do Norte (CAAE: 40436514.0.0000.5292), considering the ethical principles of the Declaration of Helsinki. All participants were informed of the research procedures and provided written informed consent to participate in the study.

The sample size was calculated using the comparison of two averages of the angular velocity of the elbow in the reaching movement during the water-drinking activity of stroke patients (64.9˚/s) and healthy individuals (121.8˚/s), obtained from the Alt Murphy study (9). With these averages, we used a spreadsheet based on Singer’s calculations (10). We found n = 10 for each group, considering a 95% confidence level and 99% statistical power.

Sampling was by convenience. Individuals who were enrolled in the physiotherapy outpatient service were evaluated and selected according to the inclusion criteria. Healthy individuals were university employees recruited and matched for sex, age, and education based on the characteristics of each patient included in the study until the sample was complete.

Eligibility criteria for sample inclusion were: (i) first-episode stroke diagnosis; (ii) unilateral brain injury; (iii) chronic stage of stroke (after 6 months); (iv) right-handed individuals; (v) aged ≤ 70 years; (vi) able to respond to clinical assessment instruments and (vii) move the affected upper limb to perform the drinking task, necessary for kinematic analysis. Those with signs of unilateral neglect, evaluated by the National Institute of Health Stroke Scale validated by Lyden (11), and those with cognitive impairment assessed by the Mini-Mental State Examination who scored below the cutoff point established by Brucki et al (12) for the Brazilian population were excluded from the study.

The patients were clinically assessed using the following instruments: NIHSS to evaluate the degree of neurological impairment, with scores ranging from 0 to 42 and the following cutoff points: 0 to 5 = light; 6 to 13 = moderate; 14 or more = severe11; the Functional Independence Measure to assess items such as self-care, sphincter control, mobility and locomotion used in the study conducted by Kimura et al (13); the upper limb sub-item of the Fugl-Meyer scale to evaluate motor function, developed and validated by Fugl-Meyer (14); and the modified Ashworth scale to assess muscle tone in the shoulder and elbow, according to Biering-Sørensen et al (15).

After the evaluation, subjects trained on the XBOX 360 Kinect device (Microsoft®, Redmond, Washington, USA). Patients underwent training with the paretic upper limb. To maintain the pairing of healthy individuals, they trained with the right or left upper limb, according to the corresponding paired patient. The Kinect Sports® “paddle panic” mini game was used for training. In this game, the participant's avatar bats 60 balls that another player throws with only one hand in 45 seconds. Every hit ball was computed as one point. To hit the ball the individual performs shoulder flexion with forward and sideways elbow extension, depending on the direction of the ball. Patients performed 2 sets of 10 trials each. The rest period was 45 seconds between each trial and 15 minutes between sets, totaling 30 minutes of training (Figure 1). Healthy individuals performed only 1 trial of the game (60 balls in 45 seconds) in order to compare with the evolution of the patients' performance (Figure 1). 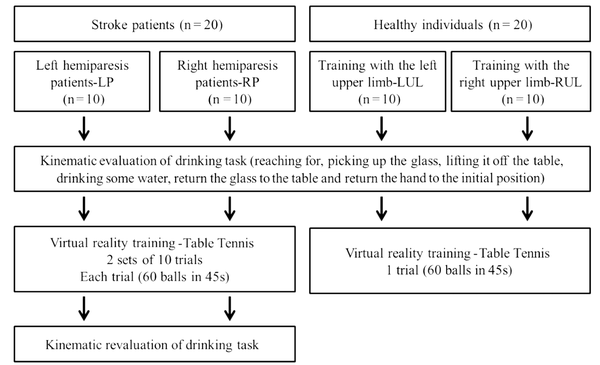 Flowchart of the Methodological Procedures

The average angular velocity of the shoulder and elbow in the sagittal plane (flexion and extension) during the task of drinking from a glass, was obtained through kinematic analysis, before and after the virtual game (Figure 1). The task was recorded using the Qualisys Motion Capture System (16) by capturing (12) reflective markers positioned on the upper limb, according to Qualisys Track Manager 2.6 - QTM guide. The markers were named and exported to Visual 3D software, where a biomechanical model was created, and the processing of the kinematic analysis was conducted.

To perform the proposed activity, participants remained seated on a 46cm-high bench and their feet were fully supported on the floor. In front of the participant, a table 73cm-high was placed. The table was at a distance where the hand remained supported on the edge of the table, the elbow in approximately 90° of flexion and the arm in a vertical position and close to the body. This distance allowed participants to perform the activity without rotating or bending their torso. A 200mL acrylic cup filled with 100mL of water was placed in the center of the table. The drinking task involved reaching for the glass, picking it up, lifting it off the table, drinking some water, returning it to the center of the table and placing their hand in the initial position.

The statistical package SPSS 22.0 (Statistical Package for the Social Science) was used for statistical analysis, assigning a significance level of 5%. The Shapiro-Wilk test was used to verify the distribution of data. The unpaired Student's t-test was used to confirm the pairing of healthy individuals and patients and compare data from the clinical evaluation of patients with right and left hemiparesis. Repeated-measures ANOVA with the Bonferroni post-hoc test were used to determine performance differences between trials in the virtual table tennis game and determine differences in average angular velocity in the drinking task between patients and healthy individuals, before and after training (evaluation and revaluation). Cohen’s d was calculated to verify effect size, according to the following classification: (> = 0.15 and < 0.40); (> = 0.40 and <0.75); (> = 0.75 and < 1.10); (> = 1.10 and < 1.45), that is, small, medium, large, very large and huge effect, respectively (17).

According to data analysis, there was no significant difference in age, weight, height, and education between patients and healthy individuals (Table 1). LP and LUL groups were composed of 5 men and 5 women. RP and RUL groups consisted of 3 men and 7 women. There was no significant difference between LP and RP groups in time since stroke, NIHSS (neurological impairment), FIM (functional independence), Fugl-Meyer scale (upper limb motor impairment) and Ashworth scores (spasticity) (Table 1). Patients exhibited mild neurological impairment and moderate motor impairment in the affected upper limb. 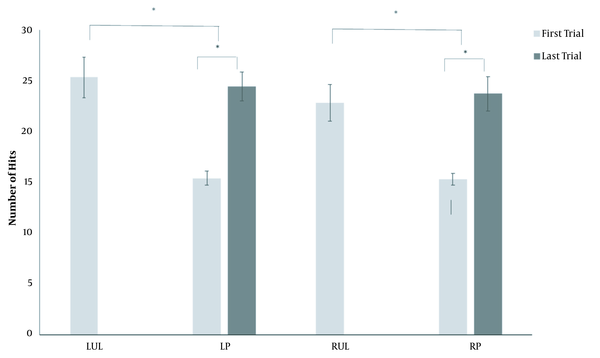 Comparison of the performance (number of hits) between healthy individuals who underwent training with left (LUL) and right upper limb (RUL) and patients with left (LP) and right hemiparesis (RP), in first and last trials of virtual table tennis game.

c Significant difference between the evaluation and revaluation of the hemiparesis patients.

Table 3. Effect Size by D'Cohens for Average Angular Velocity of Shoulder and Elbow in the Studied Groups

Accordingly, virtual reality games can promote greater activation of the right brain hemisphere, especially in areas of somatosensory association, due to the multisensory stimulation that they provide with visuospatial feedback (18). These findings may explain the less significant improvement in average angular velocity after VR games in RP, corroborating other results showing that virtual games may have a better effect on LP (8).

In addition to the results already discussed, all the patients performed the table tennis virtual game worse than healthy subjects, clearly showing the influence of neurological and motor impairment on game performance. However, patient performance improved consistently, indicating a motor learning effect and activation of the central nervous system of these patients in favor of neural reorganization after training for a specific task with virtual table tennis (19).

This may have been caused by the varied practice that the game provided, since the launching of the table tennis balls was repetitive and random. The literature shows that this type of practice may result in the individual’s performing better on the task (20). In this respect, varied practice must be considered during motor rehabilitation, because performance during the attempts may indicate whether the patient has evolved from the cognitive stage to associative and autonomous motor learning.

Due to their brain injury, the movement of stroke patients is expected to be slow, because of space-time decoupling and abnormal muscle activation patterns, making movements more segmented and variable than in healthy individuals (21). The process of learning transfer between motor skills is important for the therapist during clinical practice (7), since it promotes an increase in the number of functional activities that can be performed at home and in the social life of patients (22). In addition, when rehabilitation involves the transfer of learning, it is able to integrate the “Activity” and “Participation” domains of the International Classification of Functionality, Disability and Health (ICF) (22). The ICF-based clinical practice must include promoting an individual’s activity within ecological contexts integrating perception and action, and promoting a focus on the performer, task and environment (23).

The main limitation of the study was the short training time, which did not characterize the long-term effects of the learning transfer process. Future prospective studies should analyze the motor response of stroke patients submitted to a virtual reality protocol with longer training time and determine the long-term retention of motor skills, in order to better support clinical practices and taking into account the brain injury side.