There is a folk belief that drinking Ramsar spring mineral water (RSW) is a remedy for renal stones.

This study aimed to evaluate the effect of RSW on prevention or treatment of nephrolithiasis in male Wistar rats and identify the constituents of the water.

Calcium oxalate crystals were significantly increased in EG group (in the prevention protocol) as compared to the control group (P < 0.01). Moreover, RSW did not significantly prevent CaOx crystals but alleviated CaOx crystals at 15 and 20% concentrations in the treatment protocol (P < 0.001).

The hard water of Ramsar spring reduced CaOx crystals in nephrolithiatic rats, which may be due to its high calcium and magnesium content.

Nephrolithiasis is the third common urinary disease progressively increasing across the world (1). It occurs when the promoter and inhibitor of crystalization balance are disturbed in the kidney tissue (2). Its prevalence rate is 7 to 13% in North America, 5 - 9% in Europe, and 1 - 5% in Asia (3). Despite the existence of modern techniques for the treatment of stone diseases, the stone recurrence rate is still high, and the chance of the recurrence is 30 - 50% within three to five years of the first stone event (4). Due to the high incidence of new and recurrent cases of renal stones, there is a high level of morbidity, both acute and chronic, and the management of the disease is expensive (3). There are different kinds of kidney stones, including calcium oxalate, calcium phosphate, uric acid, struvite, and cystine, and the most common ones are calcium oxalate stones (5). Many dietary factors have been suggested to contribute to stone diseases. Epidemiological studies have shown that the following dietary factors protect patients against stone recurrence: fluid intake, calcium, magnesium, potassium, phytate, fruits, fiber, vegetables, coffee, tea, wine, beer, and orange juice. Dietary intake of sugar-sweetened beverages, high-fructose foods, animal proteins, foods rich in vitamin C, and spinach increases the risk of renal stone diseases (4). Several studies have shown that there is an independent association between lower calcium intake and increased kidney stones risk; however, the mechanism by which the higher calcium intake may result in a decreased risk of kidney stones is not clear (6-9).

The hardness of water is related to the carbonate and sulfate salts of calcium and magnesium. The effect of water hardness on urinary stone formation is not clear, in spite of a weak correlation between water hardness and urinary excretion of calcium, magnesium, and citrate (10).

The city of Ramsar is located in the north of Iran, and Ramsar spring is in the countryside of this small city. There is a folk belief that drinking Ramsar spring water (RSW) is a remedy for renal stones. Many nephrolithiatic patients drink this water and state that it is useful for treating nephrolithiasis, and many passengers travel to the Ramsar spring in order to supply the water for later usage. So far, no scientific investigation has been conducted to explain whether it has any beneficial effect in preventing or treating renal stones.

The present study aimed to identify the constituents of the water and examine its effects on the prevention or treatment of nephrolithiasis in male Wistar rats.

The experiment was conducted following the approval of the Ethics Committee, Mashhad University of Medical Sciences. All the animals received human care according to the criteria outlined in the guide for the care and use of laboratory animals developed by the National Academy of Sciences and published by the National Institutes of Health (NIH publication 86 - 23, revised 1985). Ninety male Wistar rats aged 2 - 3 months were purchased from the animal house of the School of Medicine. The animals had ad libitum access to standard rat chow and tap water, and were kept under a controlled 12 h light/dark cycle at 22 ± 2°C.

The kidney tissues were washed with saline and put in 10% formalin, then processed (Pro 200 tissue processor, Italy) and paraffin blocked. On each slide, three sections with 4 μm thickness were stained with Hematoxylin and Eosin (H & E). The renal tubules containing CaOx crystals were counted under light microscopy with a magnification of ×400 in 10 microscopic fields (11). The results were reported by an expert pathologist who was blinded to treatment groups.

The water analysis was performed at Dr. Reihani Laboratory, Mashhad, Iran. The level of sulfate, nitrite, phosphate, nitrate, carbonate, ammonia, and alkalinity were measured by a spectrophotometer (Unico, China). Sodium and potassium levels were measured by a flame photometer (SEAC, China); total hardness, Mg, and calcium hardness, chloride, and hydrogen sulfide were evaluated by the titration method via an automatic burette (standard solutions of Merck, Germany), total dissolved solutes (TDS), and electrical conductivity by a BC Meter (HANA, Hungary), and finally, pH was measured by a pH Meter (HANA, Hungary).

All experimental protocols were conducted in compliance with the regulations of the Research Ethics Committee of the University and the Iranian Ethical Guidelines for the Use of Animals in Research. All animal experiments were performed under the protocols approved by the United States National Institutes of Health (NIH, 1978). This study was also approved and supported by the Ethics Committee of Mashhad University of Medical Sciences (ethical code: IR.MUMS.sm.REC.1395.150).

Data were presented as mean ± standard error of the mean (SEM) and analyzed by the Prism software. Kolmogorov-Smirnov test was used for the assessment of normality. One-way ANOVA followed by Bonferroni post-hoc test were performed to determine the significant differences among the groups. A P-value < 0.05 was considered statistically significant. 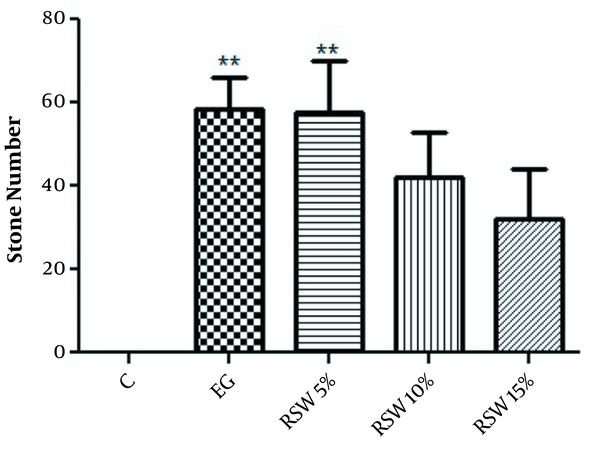 In the treatment protocol, the number of stones was significantly decreased in rats treated with 15 and 20% RSW (P < 0.001) when compared to the EG group; however, there was no significant difference between the group treated with 10% of RSW in comparison to the EG group (Figure 2). The results of kidney weight showed that there was no significant difference between right and left kidney weights (data not shown). The histological findings are depicted in Figure 3. The results of the spring water analysis are shown in Table 1. 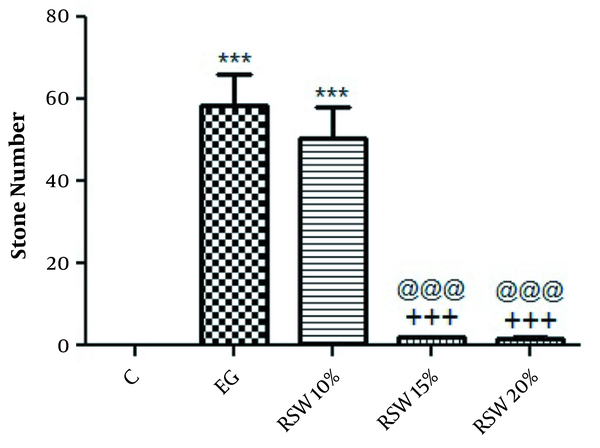 This study showed the beneficial effect of RSW in treating nephrolithiasis in male rats. Inhabitants of northern Iran usually drink RSW to treat kidney stones. The surrounding soil of the spring is red, suggesting that some minerals are more abundant in RSW. The total hardness of water is over 2.5 times that of the upper limit permitted. Hence, people dilute it in daily drinking water to make it palatable. The concentrations of most important ions in the water sample were in the following order: Ca2+ > Na+> Mg2+ and HCO3- > SO42- > Cl-. According to the World Health Organization (WHO) international standards, the optimal pH range is 7.0 - 8.5 (12); however, the pH of RSW is acidic. The total dissolved solutes (TDS) are more than 2.5 times that of the desirable amount but are still lower than the maximum limit permitted. Electrical conductivity, a good measure to reflect TDS, is lower than a groundwater sample from northwestern Iran (12). The relationship between water hardness and stone formation is a controversial issue. According to a WHO report, drinking hard water has protective effects against nephrolithiasis (13). Living in areas with hard water is associated with fewer kidney stones (14). Meanwhile, the reduction of kidney stones has been reported following increased consumption of dietary calcium (9, 15, 16). The increased nephrolithiasis has been associated with a low consumption rate of calcium-containing foods in some Arab countries (17). This could be due to a low calcium intake and an increase in the absorption of oxalate, which leads to an increase in CaOx stone formation. The oxalate ion plays a crucial role in CaOx lithiasis (18). The enhancement of calcium intake leads to the formation of more CaOx in the intestinal lumen, which is ultimately eliminated in the feces (9). The comparing stone formers with non-stone formers with the same drinking water have shown that calcium secretion in stone formers is more than non-stone formers, so the mechanism of water handling may be different in stone formers (19). A study showed that the consumption of water with high calcium and magnesium resulted in hypercalciuria. However, it was associated with decreased oxalate excretion, which is important in the crystallization of calcium oxalate and stone formation (20). A similar study recommended hard water in calcium stone formation (21). Therefore, it is possible that low calcium diet may contribute to kidney stone formation in some calcium stone formers. In this study, the Ca ion concentration was higher than the maximum limit permitted study (Table 1).

The calcium and magnesium content of water are two determinants of water hardness; however, other cations such as zinc, iron, manganese, barium, and aluminum also contribute to it (22). The calcium level at approximately 60 - 400 mg/L has been defined as “very hard” water by the World Health Organization (WHO) (23). Basiri et al. reported that stone incidence in areas of Iran has a reverse relationship with the magnesium levels in drinking water (24). Rodgers et al. studied three types of water among non-stone formers and stone formers and reported that water with low calcium and magnesium decreased magnesium excretion, while increased the oxalate-to-magnesium ratio, so increased the risk of stone formation (20).

It has been reported that treatment with magnesium hydroxide exerts positive effects on recurrent calcium nephrolithiasis (25). In a chronic bed rest model, treatment with potassium magnesium citrate (KMgCit) reduced the risk of stone formation due to alkalization of the urine (26). It seems that a high magnesium concentration leads to the formation of magnesium oxalate compound in the intestinal lumen and subsequently a reduction of urinary oxalate (26). Chronic hypomagnesemia can affect calcium homeostasis by inducing changes in parathyroid status and ca regulatory axis (27). In addition, magnesium and vitamin B6 can also convert the insoluble calcium oxalate into soluble magnesium oxalate, which decreases the risk of stone formation (27). In this study, the Mg ions were higher than the desirable limit but lower than the maximum limit is permitted (Table 1).

Based on a systematic review, some studies have investigated the effect of bicarbonate on kidney stones formation in human subjects and recommended a high level of bicarbonate in drinking water in the prevention of nephrolithiasis. Some studies have shown that high magnesium level in drinking water can decrease the risk of kidney stone formation. In addition, some studies recommended high calcium water for struvite stones (22). There is a high level of calcium, bicarbonate, and magnesium in Ramsar spring mineral water that may play a critical role in prevention and treatment of kidney stones. The results of our study show that Ramsar spring mineral water reduces the number of kidney stones in the rats treated with EG.

As mentioned, various articles have recommended the use of water containing high amounts of calcium, magnesium, and bicarbonate for the treatment or prevention of kidney stones, and Ramsar spring mineral water contains a large amount of calcium, magnesium, and bicarbonate. In addition, the results of our study show that Ramsar spring mineral water reduces kidney stones in rats treated with ethylene glycol. Therefore, it may be useful in alleviating kidney stone formation.

Consumption of the hard water of Ramsar spring may be useful in alleviating kidney stone formation. Although the exact mechanism of its action remains to be revealed in future studies, it may be because of its high calcium and magnesium content.