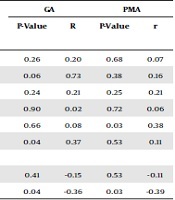 One of the fundamental factors in infants’ readiness to discharge from the Neonatal Intensive Care Unit (NICU) is attaining full oral feeding. Determining the infants’ development requires instruments to comprehensively assess the infants’ oral skills and the process of feeding.

This study aimed to measure the validity and reliability of Early Feeding Skill assessment (EFS) and the subscales of the cue-based feeding (Oral Feeding Readiness scale (OFRS) and Oral Feeding Quality scale (OFQS)).

EFS and cue-based feeding scales are valid and reliable scales to assess the oral feeding skills of preterm infants; however, using only one of these scales solely to evaluate infants’ feeding process is not enough.

One of the most important concerns for preterm infants’ discharge is the achievement of oral feeding skills (1, 2). The immaturity of neurological, cardio-respiratory, and gastrointestinal functions in preterm infants leads to delay in oral feeding (3-5). Approximately, 40% to 70% of infants with comorbidities and 3% to 10% of other infants require tube feeding after discharge (6). One of the most difficult tasks for preterm infants is making a decision for starting oral feeding (7, 8). The evaluation should be performed based on the maturity of infants’ neurodevelopment, respiratory status, weight, activity level, and coordination of sucking, swallowing, and breathing (4). Facilitation of transition to independent oral feeding is one of the most important aims of the speech-language pathologist in the neonatal field (9).

Assessment instruments are required to objectively evaluate infants’ oral feeding skills before and during feeding (10, 11). If tools do not provide enough detail to guide therapists for decision-making about the starting time of oral feeding, they are not able to identify deficient areas of infants’ oral skills to select the best method for intervention, and more importantly, tools do not determine the effects of feeding interventions precisely. In this situation, it is possible to start infants’ oral feeding before readiness for feeding, which has negative effects on infants and families, such as prolonged hospitalization, increase in health costs, and low interaction between infant and parents (6, 12).

There are some available scales to assess the infants’ oral feeding skills (10). LATCH is one of the scales developed to assess oral feeding skills during breastfeeding (L, latches; A, audible swallowing; T, nipple type; C, level of comfort; H, holding infant) (13). Another scale is Preterm Oral Feeding Readiness scale (POFRS) that is only for assessing preterm infants’ oral feeding readiness. The subscales of this scale include corrected age, behavioral organization, oral posture, oral reflexes, and nonnutritive sucking (14, 15). Moreover, Neonatal Oral Motor Assessment scale (NOMAS) is one of the primary tools to assess infants’ oral motor function and sucking. NOMAS is a 28-item scale that evaluates the infants’ jaw and tongue movements to classify their sucking patterns as normal, disorganized, or dysfunctional. It solely assesses the movements of tongue and jaw (6, 16, 17).

The above-mentioned scales assess oral motor skills before feeding and only the LATCH scale assesses during feeding, which is not used for evaluation during bottle feeding and before starting oral feeding. Oral feeding progress in preterm infants is evaluated based on neurodevelopmental evolution, the avoidance of stresses during feeding, and positive experience (18). Early Feeding Skill Assessment (EFS) and cue-based feeding are the only scales which evaluate infants’ oral feeding readiness before feeding, feeding tolerance, and feeding quality during their feeding.

Evidence demonstrates that the cue-based feeding approach is based on the recognition of ready cues and stress cues to help preterm infants to attain an independent oral feeding that is safe and efficient. In the cue-based feeding protocol, infants’ feeding behaviors are assessed based on the Oral Feeding Readiness scale (OFRS) which investigates infants’ oral feeding cues such as infant’s state, rooting behavior, muscle tone, physiological instability before feeding, and Oral Feeding Quality scale (OFQS) that considers oral feeding behavior during feeding such as sucking, coordination between sucking, swallowing, and breathing, and duration of feeding (19-21).

Early identification of infants with feeding disorders is necessary to receive appropriate treatment, optimize their feeding, and improve oral feeding skill. However, since infants are not able to communicate during feeding, confusing feeding behaviors might appear inconsistently. It is difficult to distinguish between confusing feeding behaviors and usual feeding behaviors. Under this condition, some instruments are required to objectively and comprehensively assess the infants’ oral skills and process of feeding (10, 11). EFS and cue-based feeding scales are the only scales which not only assess infants’ feeding readiness before starting oral feeding but also their oral feeding quality during feeding. Using these scales, speech and language pathologists are able to identify and resolve infants’ oral feeding problems early and recognize the best time for infants to attain independent oral feeding, which positively affect infants’ growth (6, 25). In addition, one of the most important feeding methods over the world is cue-based feeding, and since this method has been recently used in Iran, the validated scale of this method is required.

A cross-sectional study was carried out. The study protocol was approved by the Institutional Review Board, School of Rehabilitation, and the Ethics Committee of Tehran University of Medical Sciences (code: IR.TUMS.VCR.REC.1398.042). The consent form was completed by the infants’ parents.

Participants consisted of preterm infants with gestational age (GA) ≤ 34 weeks born in the Neonatal Intensive Care Unit of Shariati Hospital, Tehran University of Medical Sciences, Tehran, Iran, from December 2017 to February 2018. The infants were enrolled based on convenience sampling, and the restriction of enrollment method was used for minimizing confounding variables (26). Term infants and preterm infants over the gestational age of 34 weeks were the confounding variables. To control these confounders, the study population was limited to preterm infants aged ≤ 34 weeks. Infants who received a score more than 30 in Preterm Oral Feeding Readiness scale in a primary assessment performed by the speech-language pathologist, infants who did not have neurological disorders and congenital anomalies, and infants with Apgar score of 3 or more in the first minute and Apgar score of 5 or more in the first 5 minutes were included in the study. Dead infants, infants with reluctant families to participate, and a sudden change in infants’ nutritional status, such as cerebral hemorrhage or intestinal problems were excluded from the study.

According to Bonet’s study, with α = 0.05, power = 95%, and minimum ICC = 0.65, the minimum sample size was calculated for two raters and 23 preterm infants (27, 28). To prevent attrition, 30 preterm infants were enrolled in the research to determine psychometrical properties.

Early feeding skill Assessment is a 28-item scale that evaluates feeding skills in infants in three parts, including before starting oral feeding to demonstrate readiness for oral feeding by four items, during feeding consisting of four dimensions: the ability of engagement maintenance in feeding (four items), the ability of oral-motor skills organization (four items), the ability of swallow coordination (six items), and the ability of physiological stabilization (nine items), and after feeding assessment (two items). The score range of items was 1 - 3; score 1 indicates the presence of a problem and score 3 represents the absence of a problem. The content validity of EFS was affirmed by neonatal nurses and feeding experts. The inter-rater reliability and intra-rater reliability of EFS were reported 0.85 and 0.81, respectively (6, 22, 23).

Oral Feeding Quality scale (OFQS) evaluates the quality of preterm infants’ oral feeding. This scale considers an infant's sucking, coordination between sucking, swallowing, and breathing, and feeding duration. The scale consists of five items ranging from 1 to 5. Scores 1 and 2 demonstrate that oral feeding quality is satisfactory and the infant is able to feed all milk volume by bottle or breast (19, 21).

To measure the inter-rater reliability of the scales, two speech-language pathologists with 3 years experience in infants’ feeding in NICU assessed each infant before and during feeding. Therapists accomplished the assessment for each infant without consulting each other. Both therapists observed the infants’ behaviors concurrently.

To test the intra-rater reliability, while the infants’ behaviors were video recorded, each infant was assessed once by one of the therapists. After 1 week, the infants’ oral feeding skills on the recorded videos were re-evaluated by the therapist.

Intraclass Correlation Coefficients were used to test the inter-rater and intra-rater reliability of EFS. Coefficients less than 0.5 indicate poor reliability, between 0.51 and 0.75 moderate reliability, and more than 0.75 good reliability (29). Weighted Kappa was used to measure the inter-rater and intra-rater agreement of the cue-based feeding scales. Evaluation criteria for kappa, using guidelines described in Cicchetti and Sparrow (30) and Fleiss et al. (31), are as follows: Fair = k of .40 - 0.59; Good = k of .60 - 0.74; and Excellent = k > 0.74. Spearman’s correlation coefficient was used to test the convergent validity of EFS and the subscales of the cue-based feeding. The correlation between EFS and the cue-based feeding scales regarding GA and PMA were measured by Pearson’s correlation coefficient. All data were analyzed with SPSS version 23.

4.1. Inter- and Intra-Rater Reliability of EFS

4.2. Inter- and Intra-Rater Reliability of the Cue-Based Feeding Scales

4.3. Convergent Validity of EFS and the Cue-Based Feeding Scales

4.4. Correlation Between EFS and the Cue-Based Feeding Scales Regarding GA and PMA

Table 5. Correlation Between the EFS and Cue-Based Feeding Scales Regarding GA and PMA

This research investigated the reliability and validity of EFS and the cue-based feeding scales. There was no noticeable change in terms of translation and face validity. A professional group consisted of 10 speech-language pathologists who approved the clarification and relevance of the items. This was in agreement with the study that Ludwig and Waitzman (32) performed to investigate the content validity of the Cue-Based Feeding scales. Furthermore, it was consistent with the studies conducted by dos Santos Curado (11) in Brazil on the validation of EFS for the Portuguese population, including 698 infants with GA of 24 - 37 weeks. In addition, Abarzua et al. (24) and Thoyre et al. (6) confirmed the face and content validity of EFS.

The inter-rater reliability of all subscales of EFS was good. ICC greater than 0.75 represented good reliability for a tool. The results indicated that EFS had a high level of agreement. The ability to organize oral-motor function dimension showed the most agreement, and the ability to coordinate swallowing dimension had the least agreement.

Previous studies used the internal consistency method to determine reliability. In a study by Bahrami et al. (33), Cronbach’s alpha coefficient was 0.88. Thoyre et al. (6) tested the psychometric properties of the EFS, which included 142 32-50-week PMA infants; the internal consistency of the total EFS was good (Cronbach α = 0.81). To examine the internal consistency of the subscales, they measured interiterm correlation mean, ranged from 0.28 to 0.47. The interiterm correlation mean ranged from 0.15 to 0.50 are acceptable (6). In the Portuguese version, the overall Cronbach’s alpha of EFS was 0.85. In this version, the reliability of the ability to organize oral-motor functioning (α = 0.79) and the ability to coordinate swallowing (α = 0.65) dimensions were acceptable, and the ability to maintain physiologic stability dimension (α = 0.81) was reliable (11). The standard reliability for a tool is Cronbach’s alpha coefficient of 0.7 and higher. Previous literature has confirmed the reliability of EFS (11, 33).

There was no correlation between the ability to maintain physiologic stability and the ability to coordinate swallowing dimensions regarding OFRS and OFQS (P > 0.05). Thoyre et al. (6) demonstrated a significant inverse correlation between all subscales of EFS and OFQS. The lower score of OFQS (high feeding quality) indicated the higher score of the EFS subscales (higher oral feeding skills). This difference can be due to the difference between infants’ PMA in the present study and Thoyre’ (6). Infants’ PMA in this research was lower.