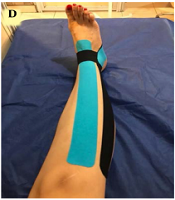 The Immediate Effect of Kinesio Taping on the Balance Performance of Patients with Chronic Ankle Sprains: A Randomized Controlled Trial

Lateral ankle sprain is a common injury resulting from a rapid supination moment that damages the lateral ligaments and cartilaginous surfaces and contributes to the deterioration of functional ankle stability and balance among individuals.

This study aimed to investigate the immediate effect of Kinesio Taping (KT) on the balance performance of patients with chronic ankle sprains.

This randomized, single-blind, parallel-group study was performed using the allocation concealment method. Sixty individuals (27 males and 33 females) with a history of ankle sprain were recruited and randomly assigned to one of the experimental (KT; n = 30) or control (non-KT; n = 30) groups. The intervention continued for two consecutive days, including four assessment sessions before and after taping on the first day and before and after removing KT on the second day. The mean and standard deviation (SD) of the center of pressure (COP) displacement and the velocity and SD of COP displacement were measured in the ant-post and med-lat directions following inversion and anterior perturbations. For data analysis, analysis of variance (ANOVA) test was performed using SPSS software version 22. This study was registered in the Iranian Registry of Clinical Trials (IRCT2013110415262N1).

Our findings revealed that KT might not improve the COP sway during perturbation in individuals with ankle sprains.

Ankle sprain is one of the most frequent musculoskeletal injuries (1), which is strongly associated with sports activities (2). Although the recurrence rate of these injuries remains very high, the results of systematic reviews, best-practice recommendations, and clinical commentaries have identified several interventions, including the use of non-steroidal anti-inflammatory drugs (NSAIDs), ice, compression, elevation, early return to motion (rather than prolonged immobilization after an ankle sprain), use of external ankle support (either a functional ankle brace or tape), and incorporation of balance exercises and coordination training, which appear to be the most advantageous strategies for enhancing the patient’s function and reducing the risk of recurrent ankle sprains (3).

In recent years, there has been a growing tendency toward the use of Kinesio Taping (KT) in different fields of rehabilitation and sports sciences for different purposes, including pain reduction (4), injury prevention (5), functional improvement (4, 6), and alterations in muscle activity and extensibility (7). KT is preferable to other functional support methods because it is more comfortable, and there is less interference with the normal function of the ankles (8). Application of KT has been widely recommended in the literature (9), and some studies have confirmed its effects on the improvement of ankle joint stability (10) and prevention of recurrent ankle sprains.

Although several studies have examined the balance indices of individuals with chronic ankle sprains after the application of KT, most of these studies have not used perturbation or only used it in one direction. Therefore, the present study aimed to examine the immediate effects of KT on the balance performance of patients with chronic ankle sprains during inversion and anterior perturbations.

This study aimed to investigate the immediate effects of KT on the balance performance of patients with chronic ankle sprains.

This randomized, single-blind, parallel-group study was conducted using the concealed allocation method, according to the Consolidated Standards of Reporting Trials (CONSORT) statement (14). The study protocol was approved by the Ethics Committee of Semnan University of Medical Sciences (92/3899950) and registered in the Iranian Registry of Clinical Trials (IRCT2013110415262N1).

Two orthopedic surgeons referred 97 patients with chronic ankle sprains to the Neuromuscular Rehabilitation Research Center of Semnan University of Medical Sciences, Semnan, Iran, in 2014. Based on the inclusion and exclusion criteria, 60 eligible subjects (27 males and 33 females) with a history of ankle sprain were randomly assigned to one of the experimental (KT; n = 30) or control (non-KT; n = 30) groups.

The inclusion criteria were being in the age range of 20 - 40 years and having a history of one or two unilateral inversion ankle sprains over the past 12 months, resulting in swelling, pain, and temporary loss of function (not in the past three months). On the other hand, the exclusion criteria, determined by a general physician and an expert physical therapist, included acute inflammation of the ankle, severe ankle instability (grade 3), ligament rupture, fracture, ankle joint dislocation or subluxation, and foot or ankle deformities.

After familiarizing the subjects with the experimental protocol in the first session, the intervention was performed on two consecutive days. The center of pressure (COP) sway was measured during non-perturbation, in the ant-post direction, and in inversion perturbation. To prevent the learning effects, the order of these positions was assigned randomly. The four assessment sessions included two sessions on the first day (before and after KT) and two sessions on the second day (before and after removing KT). The subjects were instructed to continue normal activities of daily life between the first and second days of the study (9). The physical activity level was also assessed using brief yes/no questions. The assessment sessions were similar between the control and experimental groups in terms of interval (Figure 1). Since all recorded files were coded, the researcher who extracted and analyzed the data was blind to the group assignments. 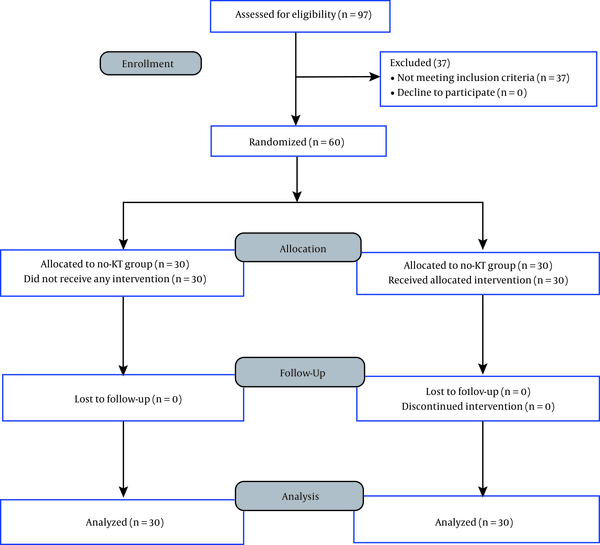 The flowchart of the study

An educated physiotherapist performed KT according to Kenzo Kase’s KT manual (15). For taping, the participants were asked to shave their legs. The affected leg was in the vertical position, with the ankle in slight plantar flexion. The tape layers were stretched approximately 20 - 35% of their maximal length (16). The first layer was started from the anterior midfoot to the right below the anterior tibial tuberosity. The second layer was wrapped around the heel above the medial malleolus, passed below the heel to the lateral side of the ankle, and attached laterally to the first layer of the tape. The third layer covered both medial and lateral malleoli, as well as the anterior aspect of the ankle. The fourth layer was started on the arch of the foot and attached proximal to both medial and lateral malleoli (9) (Figure 2).

A, The first layer is stretched from the anterior midfoot to right below the anterior tibial tuberosity; B, the second layer is wrapped around the heel from above the medial malleolus and passes below the heel; C, it passes from the lateral side of the ankle and is attached lateral to the first layer of the tape; D, the third layer covers both medial and lateral malleoli and the anterior aspect of the ankle; E, the fourth strip is started at the arch of the foot and is attached proximal to both medial and lateral malleoli.

To perturb balance, a weight measuring 10% of the subject’s body weight was used. The weight was hung and stabilized by a strong magnet at an angle of 45º from a vertical rod, which was attached to the ceiling of the test room. A single examiner administered the test for all participants. The magnet was controlled by an on/off switch. Also, the length of the rod was adjustable so that the site of impact could be standardized according to the subject’s height.

A Kistler force plate (model 9286B, USA) was used to measure the COP sway. Also, the Gait Analysis software (version 2.7, Qualisys, Sweden) was used to collect the force plate data for further analysis. The subject was asked to stand on the affected foot in an upright position (barefoot on the center of the force plate), with the arms hanging freely on the sides. The other leg was flexed in the hip and knee joints so that the first toe could touch the medial malleolus of the weighted foot. All tests, including non-perturbation, inversion perturbation, and anterior perturbation, lasted ten seconds and were repeated three times within one-minute intervals. During the tests, if the subject lost his/her balance and put the other foot down, the test was repeated.

The ankle KT has been widely advised for people with ankle sprains to improve the ankle joint function (4, 6). This randomized controlled trial was designed to investigate the effects of ankle KT on the balance indices of patients with chronic ankle sprains during the ant-post perturbation and inversion perturbation. Our results confirmed that during inversion perturbation, the postural sway was significantly higher in the med-lat axis in the KT group compared to the control group.

In the present study, KT was applied as an adjunct therapy to improve the balance of patients with chronic ankle sprains, because according to some studies, KT is effective in the balance of patients with ankle sprains (18-20). The inefficacy of KT observed in the present study was not consistent with the results of some trials. In this regard, Jackson et al. (16) carried out a study to determine the relationship between KT and balance in subjects with chronic ankle instability. They showed that KT improved balance after it was applied for 48 hours. Moreover, in 2015, de-la-Torre-Domingo et al. (21) studied the effects of KT on the balance of subjects with chronic ankle instability and observed no significant differences between the KT and non-KT groups in the majority of balance measurements in the follow-up.

On the other hand, a systematic review in 2018 demonstrated the superior effects of KT to non-elastic taping on the ankle functional performance of healthy individuals and patients with ankle sprains (6). This discrepancy between the results of this review and our findings might be attributed to other aspects of a dynamic balance activity using ankle taping, such as increased confidence, stability, and reassurance of the individual; therefore, KT might not affect the proprioception (22). Another reason for this discrepancy might be the recommended application time of KT, which is 3 - 5 days while the tape still holds its elastic properties (15). It is possible that the duration of KT application in our study was insufficient to generate the positive results reported in other studies, which applied KT for more than 24 hours (21).

The results of some recent studies are in line with our findings. In a recent systematic review, KT had no positive effects on the proprioceptive sense of patients with a history of ankle sprains (13). Briem et al. (24) also demonstrated that KT application did not affect the evertor muscle function, which controls the lateral ankle sprain. The present results support the idea that KT cannot improve the balance control of patients with chronic ankle sprains. Besides, our findings were supported by a study by Shields et al. (26), which found that KT might not improve the postural control of individuals with ankle sprains. It seems that perturbation can create more challenges for balance control compared to the static balance control method, which was used by Shields et al. in their study.

In the present study, the application of KT in patients with chronic ankle sprains could not improve the balance control of patients, which was disturbed by inversion and anterior perturbations immediately and 24 hours after KT application. Although the KT technique has become a popular treatment among athletes, its actual effects are still being investigated. Therefore, further investigations are needed to examine the application of this technique for more than 24 hours on the balance control of patients with ankle sprains during perturbation.

There are several limitations in this study, such as the short-term follow-up period, the limited age range of the subjects, and the type and level of the subjects’ physical activity before the tests. These limitations may prevent the generalization of our results to the general population and suggest the need for further research on a larger group of patients in a wider age range.

Our findings showed that application of KT over the ankle joint was not effective in balance control and postural sway during inversion and anterior perturbations, because an increase was observed in the balance indices of individuals during inversion and anterior perturbations. Overall, the present findings did not approve the application of KT for patients with chronic ankle sprains.