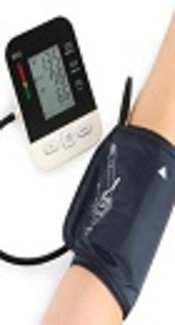 This study aimed at determining the appropriate arm for BP measurement in stroke survivors.

This cross sectional study comprised of 100 volunteer and willing stroke survivors enrolled using the convenient sampling technique from 2 public hospitals in Maiduguri, Nigeria. Each participant’s BP was measured as stipulated by previous studies. Descriptive statistics were used to summarize the socio - demographics and clinical characteristics of the stroke survivors. Student’s t - test for independent samples was used to compare mean BP between unaffected and affected arms of the participants.

Mean age and age range of the participants in years were 53.8 + 17.7 and 20 to 90, respectively. Participants that had had a stroke within the previous 7 months accounted for 69.0% of cases. Spastic stroke constituted 71%. Sides of the body afflicted with stroke were equally distributed. A significant difference (p = 0.017) existed in blood pressure between unaffected and affected arms of stroke survivors.

Health workers involved in the management of stroke patients were advised to take blood pressure measurement from both the affected and non-affected arms; the arm with the higher value should be taken as the reference arm.

Blood Pressure (BP), a key vital sign in patients’ assessment, is the force exerted laterally on the walls of the arteries by the blood due to contraction and relaxation of the heart muscles (1). Measurement of BP gives the clinician information regarding the patient’s baseline cardiovascular status, response to exercise, and guidelines for exercise prescription (1). In non - stroke patients, hypertension guidelines (2-4) advised that BP should be measured in both arms and BP value from the arm with higher BP should be regarded as a reference, since normal differences in BP between the arms exist (5). Despite this recommendation, very few health professionals find the time to measure BP in both arms before establishing hypertension or commencing therapy (6-8). However, Uijen et al. (9) reported that these guidelines did not state, which arms to choose in stroke survivors. This is quite surprising because, according to Sacco et al. (10), accurate control of BP in a stroke survivors is of utmost importance in secondary prevention of cardiovascular disease. For instance, a diastolic BP reduction of 6 mmHg decreases the risk of recurrent stroke by one - third (11). Therefore, to prevent recurrent stroke, a major cause of morbidity and mortality among stroke survivors, the choice of the appropriate arm for BP measurement in this population is crucial, especially for high - risk survivors. Moorthy et al. (12) observed that BP measurements on the affected arms of stroke survivors did not correlate well with measurements on the normal arms. Among past and contemporary clinicians, the reference arm for BP measurement in persons with stroke is fraught with ambiguity and controversy. Mulley (13) had the opinion that BP measurement in stroke survivors should be taken in the non - stroke arm. Bucy (14) reported a lower BP in the affected arms of stroke survivors, while Yagi et al. (15) documented a higher BP in the affected arms of the stroke survivor population. Dewar et al. (16) found a similar mean BP in the affected and unaffected arms of individual stroke survivors. However, when the authors compared the muscle tones in the stroke survivors’ arms, regarding spasticity and flaccidity, they observed significantly higher BP in the paretic arms of the stroke survivors with spastic stroke (16). Among the aforementioned findings on BP differences in the arms of stroke survivors, none seem to be later than 2 decades ago; notwithstanding the relevance of accurate BP measurement in the prevention of recurrent stroke among stroke survivors. In addition, none of these studies were conducted in Nigeria, the most populous black nation in the world, and thus in Africa. With this background, the current researchers aimed at determining which arm is more appropriate as a reference arm for BP measurement in stroke survivors.

This study had a cross - sectional design. Convenience sampling was used to recruit participants in this study.

This study was conducted at the University of Maiduguri Teaching Hospital (UMTH) and the State Specialist Hospital Maiduguri from June to August, 2012.

Approval for the study was obtained from the University of Maiduguri Teaching hospital, Maiduguri Ethical Committee. Stroke survivors attending physiotherapy at the selected study settings were approached during the clinic days and their consents were sought and obtained before recruitment in the study. The socio - demographic form was administered by the researcher to the participants. Clinical characteristics of patients (muscle tone, duration of stroke, and side of stoke) were obtained from the case notes of patients and were assessed using standardized techniques by the attendant physician.

Blood pressure measurement: Blood pressure was measured using a standardized digital sphygmomanometer (ACON laboratories Model, CA92121, USA). All blood pressure measurements were taken in sitting position with the back supported; the arm was bare and supported using pillows placing the antecubital fossa at heart level and the cuff was placed so that the lower edge was at least 2.5 cm above the elbow crease. In each participant, the arm that was used for initial measurement was randomly selected; any arm the patient presented first was used for initial measurement (right or left arm) and 3 recordings of the blood pressure were taken and the cuff was transferred to the other arm and the next 3 readings were taken. Mean for each set of the 3 BP readings was calculated and used for data analysis (16). All measurements were made by a single observer.

Descriptive statistics of frequency and percentages summarized the age and gender of the stroke survivors, as well as the selected clinical characteristics of stroke (tonicity, side affected, and duration of stroke) inherent in the participants. Student’s t - test for independent samples was utilized to compare the mean BP between the unaffected and affected arms of the stroke survivors based on age and gender, and muscle tone and duration of the stroke. All analyses were performed using Statistical Package for the Social Sciences (SPSS) version 20.0 software (SPSS Inc., Chicago, Illinois, USA). A P-value of < 0.05 was considered statistically significant.

Out of the 100 participants, 55 (55%) were female. The mean age and age range of the participants in years were 53.8 + 17.7 and 20 to 90, respectively. Middle aged participants were in majority (54%) and those that presented spastic stroke constituted 71%. Sides of the body affected by stroke were equally distributed. Participants with stroke for less than 7 months accounted for 69% of stroke survivors (Table 1). Age, gender, and duration of stroke had no significant effect on BP between arms of stroke survivors. Tonicity was a major predictor of either low or high BP in the arms of this population. Tables 2 and 3 portray Student’s t - test for independent samples on mean systolic and diastolic blood pressure, respectively, in the unaffected and affected arms based on the total number of participants, age and gender, and clinical characteristics of stroke as presented by the participants.

Table 3. Student’s t - test for Independent Samples on Mean Diastolic Blood Pressure taken from affected and unaffected arms Based on Total Number of the Participants, Age, and Gender, and Clinical Characteristics of Stroke

The current study showed that more than half of the participants were females. This could be attributed to the fact that females experience stroke at a younger age (< 40 years) than males, probably due to unmonitored Pregnancy Induced Hypertension (PIH) (17). Dewar et al. (16) in a similar study recorded female preponderance. The mean systolic BP in the unaffected arms was significantly higher than that in the affected arms of the participants. This could be due to variations in muscle tone between the dominant and non - dominant arm. Previous studies (9, 12, 16) have reported this to be a strong predictor of lower or higher BP in the arms of stroke survivors.

Age, gender, and duration of stroke were found in this study to have no significant effect on BP between arms. Findings of the current study are in accordance with those of earlier studies (9, 16), although reason(s) for this could not be ascertained. Tonicity was a strong determinant of BP disparity in the arms of stroke survivors as demonstrated in the current study, as well as other previous studies (9, 12, 16). The lower BP in the flaccid arms compared to the spastic and unaffected arms could be a result of increased compressibility of hypotonic muscle by the sphygmomanometer cuff. This compression might have resulted in partial occlusion of the brachial artery as observed by Dewar et al. (16). Comparing the spastic and unaffected arms revealed a significantly higher (p < 0.05) mean BP in the former. It could be suggested that hypertonic muscles resists compressibility of the sphygmomanometer cuff in spastic arms compared to the unaffected arms of stroke survivors.

4.1. Limitations of the study

The non - probability technique used in recruiting the sample for this study may have resulted in selection bias, which limits the generalizability of the findings. Similarly, the small size of the sample of stroke survivors that participated in this study may also affect the external validity of findings.

Tonicity was a major predictor of either low or high BP in the arms of this population. The researchers therefore recommend that BP should be taken in the unaffected arms of stroke survivors. For a recurrent stroke, BP in stroke patients should be measured in both arms; the arm with a higher value should be taken as the reference arm.