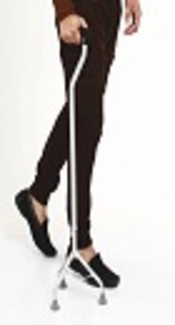 Elderly individuals make up a large part of the population, many of whom use walking aids and also tend to have a higher percentage of cardiovascular complications. There is a need to document the effects of walking with different aids on walking speed and selected cardiovascular parameters.

This study aimed at determining and comparing the effects of walking with cane, tripod, and walking frame on walking speed and selected cardiovascular parameters in apparently healthy elderly individuals.

Thirty-five (35) elderly individuals participated in this study. Participants’ systolic blood pressure (SBP), diastolic blood pressure (DBP), and heart rate (HR) were measured after ambulation with and without walking aids. Walking speed (WS) was measured as each participant walked at their normal comfortable pace without aid and with 3 walking aids on separate days. Analysis of variance (ANOVA) was used to find a significant difference between variables.

Walking frame ambulation elicited a higher blood pressure, a higher HR and a slower WS than cane and tripod ambulation, respectively. The participants walked significantly faster with a cane than tripod and walking frame.

Aging leads to a slowed capacity to develop high velocity movements and perform physical tasks to maintain independent functioning (1, 2). The elderly people represent the fastest growing age group and approximately two-thirds are living with high blood pressure (3), accepting the chronological age of 65 years and above as the definition for elderly (4). Studies have shown that high blood pressure is a risk factor for cardiovascular diseases and death in elderly people (5, 6), while a lower muscle mass has been associated with increased risk of mobility loss in older males and females (7).

Physical activity maintained throughout life is associated with lower incidence and prevalence of chronic diseases, such as cancer, diabetes, and cardiovascular diseases (8, 9). Therefore, the maintenance of mobility is thought to be fundamental to active aging, allowing older adults to continue to lead dynamic and independent lives (10).

Walking speed has been shown to be an important measure in comprehensive geriatric assessment in all clinical settings for the purposes of developing risk profiles and care plans for geriatric patients (11). Walking aids are usually prescribed routinely during geriatric rehabilitation to compensate for balance and mobility deficits (12), protect against falls (13), and increase activity and participation in patients with mobility limitations (14).

During rehabilitation of the elderly, physiotherapists usually prescribe walking aids with the aim of increasing the patient’s base of support, increasing gait safety, preventing falls, improving balance, functional independence, and improving ambulation. Because elderly individuals comprise a large part of the population using walking aids, the effect of using these aids on their walking speed and cardiovascular parameters, which are important indicators of overall health and function in aging and disease, is of major concern.

A total of 36 apparently healthy elderly individuals (17 males and 19 females), who could walk without aids were recruited in the study. They were recruited from 2 retirement homes for the elderly in Lagos state, Nigeria. This study was an observational study, in which elderly participants were assessed by observation of gait and by questioning to ensure they fulfilled the inclusion criteria for this study. Included in this study were elderly people, who were 65 years of age and above, male or female, could tolerate walking without any complaints, could walk without aids, had no visual defects (impairment of vision, such as blindness), and had no cognitive impairment. Excluded from the study were elderly people, who required the assistance of another person or supportive device for walking, had any neurological disorder, uncontrolled metabolic disorder, and had uncontrolled cardiopulmonary disorders. Information relating to age, walking ability, past medical and surgical history were also obtained to determine eligibility for the study. After satisfying the inclusion criteria, the participants were fully admitted to the study after written informed consent form was dualy signed by them.

A non-probability consecutive sampling technique was used, which meant that the participants that met the inclusion criteria were recruited as they were available. The participants were assessed for eligibility for the study. The purpose, procedure, and objectives of the study were fully explained to the participants by the researcher.

Measurements of weight, height, systolic blood pressure, diastolic blood pressure, and heart rate were taken at the beginning of the study. The researcher demonstrated the correct use of different walking aids to the participants before walking. For maximal strength, balance and to protect against falls, the walking aids were adjusted to match the measurement of each participant before walking. The participants were advised to wear their normal comfortable footwear throughout the study. The subjects served as their own controls with the use of no walking aid as the comparison or baseline.

The participants walked a measured distance of 20 m unaided at their normal comfortable pace as instructed. A digital stop watch was used to record the time for the intermediate 10 m (from the 5 m mark to the 15 m mark). This was repeated twice with a rest interval of 10 minutes between each trial (15). The blood pressure and heart rate measurements were taken immediately after each trial. The mean of the variables was then obtained from the 2 measurements (before and after the trial). This was repeated using 3 different walking aids (a standard cane, tripod, and walking frame) on separate days.

Data were analyzed using SPSS version 21. Mean and standard deviations (SD) was calculated for each variable. Analysis of variance was used to compare changes in the WS and selected cardiovascular parameters for each walking aid. Level of significance was set at P ≤ 0.05.

Comparison of the changes in walking speed and selected cardiovascular parameters using Analysis of Variance (ANOVA) after walking with and without aids showed that there was no statistically significant difference (P > 0.05) in cardiovascular parameter yet there was a statistically significant difference (P = 0.001, f = 21.418) in walking speed when comparison was made between each of the trials with and without aids (Table 3).

Table 3. Comparison of the Changes in Walking Speed and Selected Cardiovascular Parameters After Walking with and Without Aidsa

The purpose of this study was to determine and compare the effects of walking with aids on walking speed and some selected cardiovascular parameters.

The results of this study showed that walking with the 3 different aids by the elderly promoted reduction in walking speed when compared with walking with no aid. It is believed that one of the reasons for this is that the participants did not use these walking aids habitually and it was their first experience walking with these aids. This could have been avoided by the introduction of a period of adaptation to the walking aids.

This finding is consistent with the results of a study by Foley et al. (16), involving 10 healthy adults where the comparison was made between walking with a cane and unassisted walking. There was an apparent decrease in walking speed when the cane was used. The current study also support the results of the study carried out by Cubo et al. (17), where the comparison was made using a standard walker, wheeled walker, and unassisted ambulation in elderly patients with Parkinson’s disease, who had motor blocks or freezing while walking. Walking speed was significantly reduced for subjects using either assistive devices compared with the unassisted ambulation. Participants in this study, in contrast, did not have any neurologic conditions yet had reduced walking speed with all of the 3 different walking aids used.

4.1. Limitations of This Study

The sample size was quite small. The participants of this study could walk without walking aids, therefore, they did not represent the typical population in need of such devices. Also, the participants had only a short time of training before using each walking aid.

Walking with walking aids had a significant effect on walking speed (WS) in the elderly. Walking with walking aids did not have any effect on the cardiovascular parameters (systolic blood pressure, diastolic blood pressure, and heart rate) in the elderly. Walking frame ambulation elicited a higher blood pressure and HR and a slower WS than cane and tripod ambulation, respectively. The elderly individuals walked significantly faster with a cane than tripod and walking frame in this study.

Based on the outcome of this study, the following recommendations were made:

It is recommended that when walking aids are being prescribed for elderly patients as a result of an underlying pathology, physiotherapists should periodically assess their walking speed, and their cardiovascular parameters, which is an indicator of health and function, to establish the short and long-term effects of using aids on the overall health of the patient.

The authors appreciate and acknowledge elderly individuals that participated in this study.

Copyright © 2018, Middle East Journal of Rehabilitation and Health Studies. This is an open-access article distributed under the terms of the Creative Commons Attribution-NonCommercial 4.0 International License (http://creativecommons.org/licenses/by-nc/4.0/) which permits copy and redistribute the material just in noncommercial usages, provided the original work is properly cited.
2022-05-05 08:23:09
Thanks for such a nice post about “Effects of Walking with Aids on Walking Speed”! This post is really very informative. I really appreciate your efforts. Thank you so much for helping !!