Chronic Low Back Pain in Young Population: An MRI Study 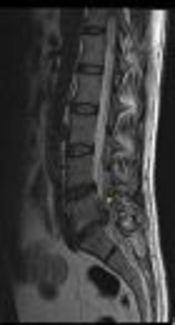 Low back pain is a common health problem in the younger population. Spinal degeneration is the most common cause of low back pain.

The purpose of this study was to investigate the most common causes of low back pain with MRI in young people under the age of 40 and to determine gender differences, if any.

This is a retrospective study on 200 consecutive patients between the ages of 17 - 39 who had lumbar MRI (1.5 T MRI). Patients were included in the study based on the information collected from the radiological database system and neurosurgical clinical archives between September - October 2017. Spinal mass, spondylolisthesis, disc degeneration, multifidus muscular atrophy, and congenital anomalies were investigated. Studied parameters were compared in male and female patients.

Disc degeneration or hernia was observed in 132 patients (66%) and no gender difference was found for a disc hernia (P = 0.376 Chi-Square test). The most frequent disc hernia was detected at the level L5 - S1. Multifidus muscular atrophy was identified in 54 (27%) of all patients and it was higher in women (P < 0.001). Accepted change of lumbar lordosis was detected only in 10 patients.

Disc herniation is the most common causes of low back pain in young people under the age of 40 and there are no gender differences.

One of the most common health problems and the topic of many studies is mechanical low back pain (1). The prevalence of back pain has been increasing not only in adults but also in adolescents (2). Paravertebral muscular atrophy, changes in lumbar lordosis, disc degeneration, as well as end-plate edema, severe facet joint degeneration, scoliosis, spondylolisthesis, spinal masses are etiological factors of low back pain. Age-related increasing spinal degeneration and muscular atrophy cause low back pain. The etiology of low back pain is determined not only biologically, but also socially and psychologically, and is called as ‘nonspecific nature of back pain’ (3). The negative influence of work stress on low back pain is also known (4). In this study, our aim is to investigate the most common causes of low back pain with magnetic resonance imaging (MRI) in young people under the age of 40 and to determine gender differences if any.

Ethics committee approval was obtained from GOP Taksim Training and Education Hospital before the retrospective study was conducted. The consent form was signed by all authors. 200 consecutive patients between the ages of 17 - 39 who had a lumbar MRI between September - October 2017 were included in the study. Neurosurgery outpatient clinic records confirmed that all patients had chronic or recurrent low back pain. Exclusion criteria were performed due to the trauma and to the history of spinal surgery.

The evaluation was performed by a single radiologist having 12 years of experience in musculoskeletal radiology. In each patient, vertebra, spinal canal assessment, and the disc levels between the first lumbarvertebra (L1) and the first sacralvertebra (S1) were evaluated separately. Miyazaki classification was used for intervertebral disc degeneration (5). The visual evaluation method applied by Ekin et al. was used for the evaluation of multifidus muscular atrophy (6). Widely accepted Meyerding method was used in the evaluation of spondylolisthesis (7). For lumbar lordosis angle, the angle between the line passing through the upper plate of the L1 vertebra and the line passing through the upper plate of the S1 vertebra in the mid-sagittal MRI was used. Angles below 40 degrees were considered as a decrease and angles above 50 degrees were considered as an increase (8).

Normality was checked by single sample Kolmogorov Smirnov test, drawing Histogram, Q-Q plot, and box plot charts. The data was presented in the form of mean, standard deviation, minimum, maximum, frequency, and percentage. Age variable between the genders was analyzed by the t-test in independent groups. Nominal variables were assessed by Chi-Square and Fisher exact probability tests. Significance limit was set at P < 0.05 and taken as bidirectional. Analyses were performed by using the NCSS 10 software program (2015; Kaysville, Utah, USA).

3.1. In the Assessment Made According to the Disc Levels (Table 1)

Table 1. The Distribution of Disc Herniation According to Lumbar Intervertebral Disc Levela,b 3.2. In the Assessment Made for Disc Hernia Based on Gender

Increase in lumbar lordosis: Lordosis increased in 3 female, 2 male, and a total of 5 patients.

Decrease in lumbar lordosis: Lordosis increased in 2 female, 3 male, and a total of 5 patients.

We found that the frequency of low back pain did not change according to the gender in 200 young adults who were consecutively studied. In our study, increase and decrease in lumbar lordosis were statistically negligible. It was found that lumbar lordosis was preserved even in patients under 40 years with low back pain. Multifidus muscle atrophy was only identified in 27% of the patients. Based on the statistical comparison between genders, muscular atrophy was found to be more frequent in females and it was consistent with the literature (6). In our study, the only finding where a significant difference between genders which was found for the young population with low back pain with multifidus muscle atrophy.

In the young population, lumbar lordosis was mostly preserved and multifidus muscular atrophy was observed relatively less frequently. On the other hand, disc degeneration or hernia was detected in 66% of patients. These findings suggest that disc hernia is the first occurring and most frequent detected cause of low back pain. The most mobile L4 - L5 and L5 - S1 levels have been affected. Based on these observations, it can be concluded that as a result of wrong or overstrained movements due to the living conditions, working conditions and individual habits, intervertebral discs are the first and most frequently affected body parts. Living conditions related to the occupational groups or regional factors may be effective in this respect. Numerous studies have been published investigating occupational groups and geographical regional characteristics that may be associated with low back pain (10).

The limitations of this retrospective study include lack of clear information regarding the occupations of the patients. However, our patients live in the same region and have similar socioeconomic conditions. Secondly, we didn’t know how long the patients had low back pain duration. This point may change the results. To optimize, we tried to choose only chronic and recurrent pain, however, it is based on patient records. Finally, the results of this study involving the young patient group cannot be generalized for all ages. New studies can be conducted to include information regarding occupations, working conditions, and daily activities of the patients.

In conclusion, intervertebral disc herniation can be shown as the most common reason for low back pain in women and men in the young population under the age of 40. Lumbar lordosis is preserved in the young population. Although its frequency is lower compared to elderly, multifidus muscular atrophy is more frequent in women.

Thanks to Sevim Purisa for statistical evaluation.