A Review of Divided Attention Dysfunction in Alzheimer’s Disease 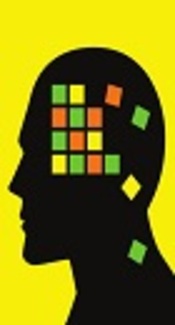 An electronic search was performed in January and February 2016 in PubMed, Science Direct, Medline, Scopus, Google Scholar, and Ovid databases to obtain relevant articles published from 1980 to 2015. The keywords used included “Alzheimer’s disease”, “attention”, and “divided attention”. The articles obtained were studied using the following standard protocol for inclusion criteria written in the English language, the focus of studies was on divided attention in AD, and no other types of cognitive ability. From the 60 articles found, 10 articles that were adhered to the inclusion criteria were selected for consideration.

Alzheimer’s disease (AD) is the most common neurodegenerative disease in older people. It is estimated that 5.5 million Americans will experience Alzheimer-type dementia (1). Alzheimer’s disease results in severe impairment of cognitive components such as memory, executive function, language, and attention (2).

All mental activities require attention (3). It has been stated that attention dysfunction is the cornerstone of decreased cognitive function in AD (4). Generally, attention is categorized as selective, sustained, and divided (3). Nevertheless, divided attention can be considered as only one part of selective attention (4). Divided attention is accompanied by concentration on more than one stimulus or task simultaneously (3-5). This type of attention is likely to be the earlier domain of attention control, which is influenced in AD (3, 4, 6-16).

The purpose of the current study is to investigate divided attention in individuals with AD from different domains.

The research questions that were addressed in this study are:

- In which brain regions does divide attention function in normal and AD brains?

- Is divided attention one of the most vulnerable types of attention in Alzheimer’s disease?

- What is the importance of such tests in AD?

- What does the capacity-sharing theory say about divided attention performance for simultaneous cognitive and motor tasks?

- What are the differences between people suffering from AD with and without depression on divided attention tasks?

An electronic search was performed during January and February 2016 in PubMed, Science Direct, Medline, Scopus, Google Scholar, and Ovid databases as well as related journals to obtain relevant articles published from 1980 to 2015. For this study, some inclusion and exclusion criteria were considered. The inclusion criteria were: written in the English language, availability of the full text of articles, type of articles were original as well as review articles and the focus of studies was on divided attention and AD, and all papers have been published between 1989-2015. The exclusion criteria were: studies that were published before 1980 and in a language other than English, studies regarding the AD and other cognitive abilities, such as working memory and executive function. In the first phase of the search, “attention” and “Alzheimer’s disease” keywords were used and 72 articles were obtained. In the second phase of the search, “divided attention” and “Alzheimer’s disease” keywords were used and 60 articles were obtained. Implementing the inclusion criteria resulted in 10 articles. A summary of the search and access to articles stages are shown in Figure 1. 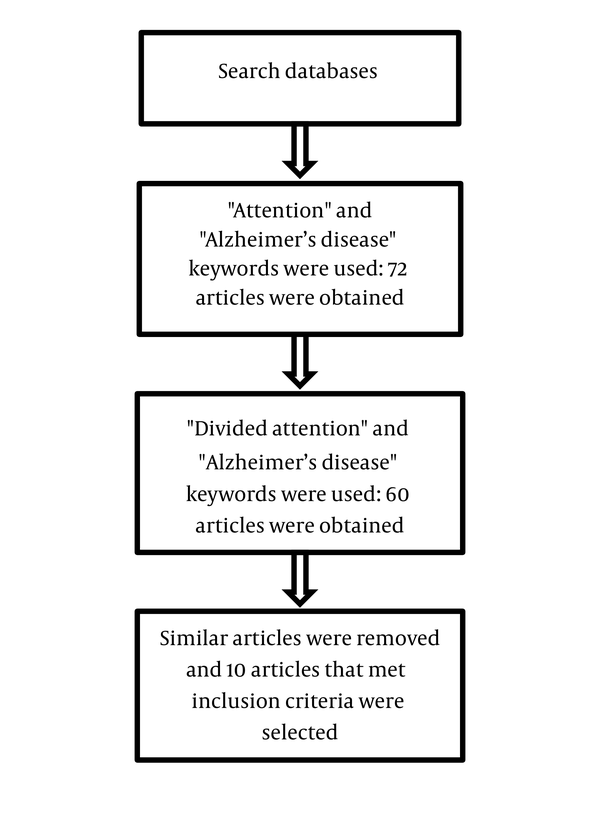 Sheridan et al. (26), examined the effects of divided attention on the motor abilities of individuals with AD. They found that patients with AD showed deficits in divided attention exhibited impairment in motor skills and step frequency, rate (time), and length of step as well as impairment in gait, which eventually leads to falls. Pettersson et al. (27), concluded that gait was influenced in a dual-task condition for individuals with AD compared with normal people. De Melo-Borges et al. (28), stated that in all phases of a TUG task (Table 1), participants with mild cognitive impairment (MCI) performed worse than the normal group and better than the AD group, especially on the divided attention task.

Nakaaki et al. (29), concluded that depressed individuals with AD performed worse on cognitive flexibility and divided attention tasks than individuals with AD without depression. In the last study, Rodda et al. (14), stated that Subjective Cognitive Impairment (SCI) and control groups did not differ on neurocognitive or socio-demographic measures, however, on the fMRI, the SCI group showed enhanced activation in the caudate bilateral thalamus, posterior cingulate, Hippocampus, and Para hippocampal gyrus during the divided attention task.

The only limitation of the current study was the lack of access to articles published before 1989, which could have had negative effects on the results.

This section addresses the questions posed in the Context section. The network hypothesis states that central processors are separate modules with specific anatomical regions that allocate different resources for various attention tasks and attention functions for selective, sustained, and divided attention (30). The frontal, parietal, basal ganglia, and thalamus have been found to be involved in divided attention (17, 31). The temporal, middle frontal, posterior cingulate, and subcortical areas are also affected by Alzheimer’s disease (7).

A number of dual or multiple tasks have been used in previous studies to assess divided attention. These tasks are listed below:

- Global-local stimuli (in this task, the subjects must simultaneously attend to both global and local stimuli and report whether or not the global form of the number with numbers written by them is the same) (10).

- The staggered spondaic word test (attention should be shared between different words presented to each ear simultaneously) (17).

- Timed-up-and-go (TUG) test in four experimental stages: (1) single TUG task, (2) TUG plus a cognitive task, (3) TUG plus a manual task, (4) TUG plus manual, and cognitive tasks. In the first phase, the single TUG task was implemented alone. In the second phase, the TUG test was incorporated with a verbal fluency task (animal category). In the third phase, the TUG test was performed while carrying a full glass of water. The fourth stage triple TUG test uses both manual and cognitive tasks (a verbal fluency test (animal category) while carrying a full glass of water). The results showed that TUG 2 and 4 were more impaired than TUG 1 and 3, which suggests that the cognitive tests interfere with functional mobility more than the motor tests. This finding underlines the impression of the task of cognition as the highest requesting factor in the divided attention task (28). These phases of the TUG test could be used to discriminate between MCI and AD groups, due to the fact that those suffering from AD require more time to complete this task.

Gait requires more attention in parallel with attentional sources during aging. Capacity-sharing theory states that implementing a talking task while walking may cause a sluggish gait or lagged performance on the second task (talking, manual and/or cognitive task). This is especially true for the elderly (32). Several studies have shown that divided attention impairment causes gait deficits (33, 34). These results support the idea that over-learned motor skills such as gait require attentional control. Attentional capacity as a plexus function requires to intact perception. The absence of sensory integration of the posterior higher cortical area disturbs executive capacity (26). Jahanshahi et al. (35), concluded that gait, as a routine or previously learned action, does not require attentional control. Stern et al. (36) illustrated the importance of input and attention from the superior cortical motor centers to implement typical movements, similar to what is required for learning a recent motor task. These results protect the important effect of executive function and attention on gait variability in individuals with AD.

Nakaaki et al. (29), suggested that depression effects people with AD and can increase deficits in cognitive and divided attention skills. In AD, symptoms of depression are known to happen from the primary phase of the disease. It also affects divided attention and executive functions, leading to worsening of the symptoms in individuals with AD. Neuroimaging research has shown that dysfunction of the prefrontal cortex is a significant component of depression in patients with AD (37). Other researchers have demonstrated that individuals suffering from AD with depression showed hypo-metabolism in the frontal lobe comprising the left anterior cingulate and superior frontal cortices of both directions and the right anterior cingulate gyrus (37).