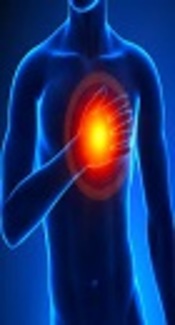 Heart failure has been recognized as a major cause of hospitalization, morbidity, and increasing healthcare costs. The purpose of this study was to determine causal relationships between the factors predicting self-care in Iranian elders with chronic heart failure.

Heart failure (HF) has been recognized as a major cause of hospitalization, morbidity, and increasing healthcare costs (1). The results of several studies have shown that patients’ self-care abilities are far from optimal (2, 3). Multiple factors, including age-related characteristics, psychosocial characteristics, clinical characteristics, and prior experiences, can contribute to HF outcomes (4).

Although some studies were conducted to assess self care behaviors (SCB) in HF patients in our country (5-7), little is known about factors affecting SCB in elderly patients. The purpose of the present study was to assess causal relationships between the factors predicting self-care in Iranian elders with chronic heart failure.

In this study, 334 elderly chronic heart failure patients (194 females and 140 males) who were hospitalized at four teaching hospitals in Mazandaran province, Iran were selected through convenience sampling. The inclusion criteria included a history of at least 6 months of involvement with heart failure, age ≥ 60, and being in a stable condition (1 - 2 days after admission). The exclusion criteria included communication problems (such as severe hearing impairment with no hearing aids or speech problems), severe cognitive impairment with abbreviated mental test scores (AMT) < 4 (8), and uncooperativeness.

Data was gathered from patients’ medical documents and through interviews. In this study, the factors predicting SCB were derived from Moser’s conceptual model (4) and the WHO adherence model (9). Then, a preliminary study was performed on 184 elderly individuals with HF (3).

Heart failure self-care was evaluated before hospitalization. To assess self-care behaviors, the European heart failure self-care behaviors (EHFSCB) questionnaire was used (10). This 12-item scale measured self-care behaviors on a 5-point Likert scale ranging from 1 (strongly agree) to 5 (strongly disagree). The total score was considered and a lower score indicated better self-care. The content validity index (CVI) of this study was confirmed by an expert panel comprised of 10 cardiologists and cardiac nurse specialists with histories of at least 5 years of work in the field (CVI = 0.97). Its reliability was assessed by Cronbach’s alpha (α = 0.74).

Depressive symptoms were assessed using the geriatric depression scale (GDS). In our country, the sensitivity and specificity of the cut of point 6, has been reported as 0.9 and 0.83 (12). In our study the Cronbach’s alpha was 0.7.

Cognitive status was measured using the Iranian version of abbreviated mental test (AMT) (13). In our country the ideal cut of the point has been identified as six and its sensitivity and specificity was 85% and 99% (13). In our study, the Cronbach’s alpha was 0.76.

All eligible patients were approached by the research nurse. After providing written informed consent, each patient was interviewed by an independent data collector who was not involved in caring for the patient. This study was approved by the Ethics Committee of Mazandaran University of Medical Sciences and complies ethically with the declaration of Helsinki.

The SPSS version 20.0 was used for data analysis. Dummy codes were used with gender, education, income, and location. All the assumptions of multivariate analyses were assessed and met, including normality, homoscedasticity, linearity, and multi-collinearity. The initial hypothesized model was tested under a structural equation modeling (SEM) technique through Amos 20.0. Confirmatory factor analyses (CFA) were conducted before testing the full model to evaluate the four measurement models for their model fit.

Indicators of the overall fit of the model were the goodness of fit index (GFI), comparative fit index (CFI), and normed fit index (NFI). Values above 0.9 were regarded as adequate and above 0.95 reflected a good model fit. The root mean square error of approximation (RMSEA) was used to determine the parsimonious fit of the model. A RMSEA value of less than 0.05 indicated a good fit, a value between 0.05 and 0.08 showed a moderate fit, and values between 0.08 and 0.10 indicated a fair fit, while values more than 0.10 indicated a poor fit.

None of the fit indices were acceptable in the initial hypothesized model (Figure 1), resulting in a modified model based on both the prior knowledge and statistical evidence (X2 to Df ratio = 4.97, X2 = 2592.14, Df = 521, NFI = 0.35, CFI = 0.4, RMSEA = 0.109). Following exploratory factor analysis (EFA) with Varimax rotation, sleep disorders, depression symptoms, and perceived social support were loaded into the age-related characteristics component of the model. 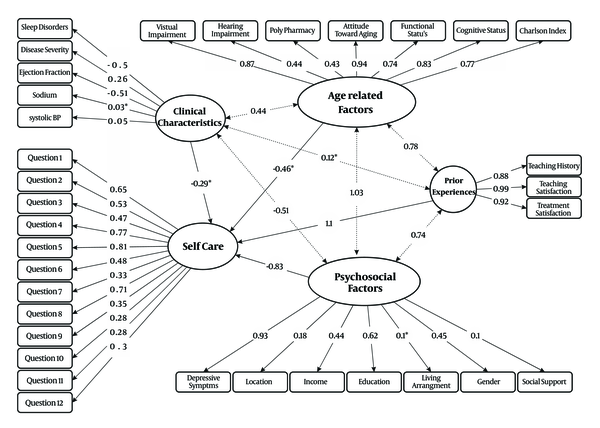 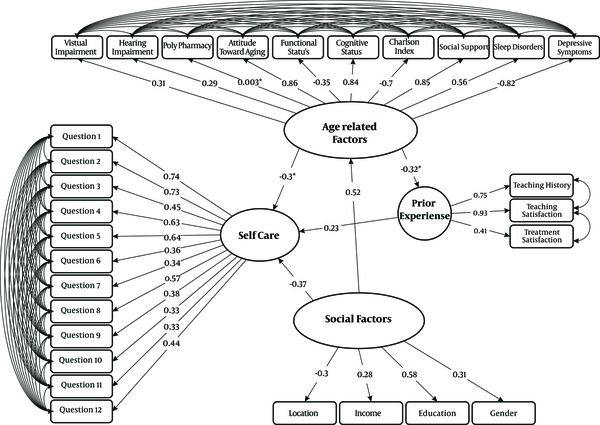 Age-related changes, such as the increased likelihood of involvement with chronic diseases, increased number of drugs consumption, changing functional status, age-related circadian rhythm, retirement, and decreased social interactions, may expose the elderly to sleep disorders (22). In addition, the results of studies have shown there is a significant relationship between sleep disorders and cognitive impairment (23) and between sleep disorders and depression symptoms (20). There are also significant relationships between depression symptoms and comorbidities (24), poly-pharmacy (25), cognitive impairment (26, 27), and attitude toward aging (28). Hearing and visual impairments may result in depression and negative stereotypes toward aging (29, 30). There is a correlation between social support and depression (31). In addition, there are correlations between perceived social support and attitude (32), cognitive status (33), and functional status (34). Regarding the evidence given above and the results of the EFA, indicators of age-related characteristics were changed from 7 to 10. It was decided to omit the clinical characteristics pathway for the following reasons: the sodium pathway was not significant in the clinical characteristics measurement model, the error of the EF pathway was significant; the coefficient of the pathway of blood pressure was low, and, theoretically, the effect of disease severity on SCB could be assessed by functional status.

Based on the results of this modified model, social factors (especially education) followed by prior experiences (especially satisfaction with teaching) were the best predictors of SCB; however, age-related factors did not predict SCB, possibly due to the fact that 65% of participants were young elderly (60 - 75 years). It seems necessary to further investigate the effects of age on SCB.

In another study, age had both direct and indirect negative effects through SCB on health status. Education had a direct positive effect on health status (37). The results of yet another study showed that patients with adequate literacy had more knowledge related to HF, higher self-efficacy, better self-care, and a better quality of life (38).

The results of the above-mentioned studies showed the role of social factors on health outcomes. Therefore, specific notice should be taken by policymakers of improving the quality and quantity of support resources and facilities, such as increasing the elderly health budget in the Ministry of Health, increasing retirement pay for the elderly, providing flexible pension systems, facilitating jobs in the non-governmental section, providing free or inexpensive supportive systems, reducing the costs of medical and health services, providing proper transportation systems, and so on (39).

Regarding the direct and indirect effects of social factors on SCB, the role of factors such as gender, education, location, and income should be considered during self-care decision-making. Applying strategies with holistic approaches seems necessary.

The results of this study showed that prior experiences, especially satisfaction with teaching, directly affected SCB. Although cardiac rehabilitation programs improve health outcomes, flexible teaching approaches are not usually based on the preferences of the elderly. Strategies such as regulatory monitoring of visual, auditory, cognitive, and emotional status; using teaching materials with bigger font sizes; speaking more slowly; and repeating teaching materials several times may increase satisfaction with teaching (3).

There is little evidence about the desired time for retaining self-care skills among the elderly with heart failure (40). More studies appear to be necessary to determine the proper time, teaching session intervals and to design the optimal model for teaching and/or consulting in this age group. The experience of other professions such as nutritionists, physiotherapists, occupation therapists, psychologists, and social workers could be advantageous.

Self-care assessment must continue for a longer time and not be limited to taking place only in hospitals. It may help to determine, for example, whether depression treatment results in improved cognition status or not. This could be useful in identifying other factors that affect self-care behaviors.

Personality traits and religious differences in elderly individuals have not been taken into consideration in the present study. There may be a correlation between these characteristics and self-care behaviors.

The results of this study showed that social factors and prior experiences, especially satisfaction with teaching, were strong predictors of SCB. Identifying the predictors may present targets for intervention. Developing programs to improve social conditions and designing the educational model based on older adults’ preferences seems necessary. Further research to investigate the effects of age on SCB is suggested.

The authors are thankful to the dear elderly with CHF for their cooperation. This study was supported by the Mazandaran University Medical Sciences, Sari, Iran, and the University of Social Welfare and Rehabilitation Sciences in Tehran, Iran (ethical committee code 93-3).