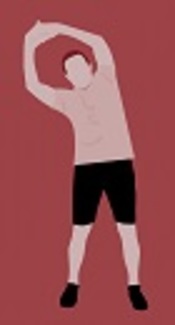 The risk of falling increases with age, and the outcome might sometimes be severe injury or even death.

This study was designed to determine whether a 12-week neuromuscular and proprioceptive training (NPT) plan was impressive on postural stability of active middle-aged men.

The study had a quasi-experimental design with a control group. In 2016, 50 middle-aged males of the Ukrainian Sports Medicine Center (Kiev) were randomly divided to experimental (performed the NPT program, rather than general warm-up routines) and control groups (maintained the general warm-up routines). The mean center of pressure (CoP) fluctuations of postural stability was assessed during eyes open (EO) and closed (EC) using a force platform in the two directions, before and after the 12-week study.

The intervention leads to a significant improvement in the mean CoP velocity in both planes (P < 0.05) in the experimental group compared to the control. All CoP parameters used in this study showed very large correlations.

The NPT program had a positive effect on postural stability. This may have a direct impact on reducing lower limb injury in middle-aged men.

Elderly people population have increased over the recent years (1). Older age leads to stability problems more than younger people because of the decline in proprioception and motor skills (2-4). Falling is an everyday occurrence, and severe injury or even death can sometimes be the result (5, 6). Regular exercise is one of the main measures to improve the postural balance (7, 8). For example, physical exercise, including aerobics (9), anaerobic (10), and aquatic exercise (11, 12) has been shown to increase postural stability in grown-up people. neuromuscular and proprioceptive training (NPT) contains a combination of balancing, strengthening, plyometrics, agility, running, and stretching exercises (13).

Integrating the NPT into the warm-up (14-16) is widely used in some young athletes. It has not been established whether integrating the NPT program in routine exercise sessions improves the balance ability of older men and reduces the incidence of lower extremity injuries. There was no evidence in this regard. Therefore, the current study was conducted to determine the effectiveness of NPT rather than general warm-up routines in reducing the postural instability in middle-aged men. Postural stability is typically analyzed using a force platform during static conditions (quiet standing) by quantitative measurement of displacements of the center of pressure (CoP) of the body in the mediolateral (med-lat) plane and anteroposterior (ant-post) planes (17-19). The parameters of CoP (i.e. CoP velocity) can be classified as related to postural motion in order to maintain stability (20).

This study had a quasi-experimental design with random and parallel groups. Fifty active men aged from 45 to 65 years old (56.5 ± 3.6 years) were voluntarily enlisted among the Ukrainian Sports Medicine Center (Kiev), who had at least three sessions of exercise a week. Participants were randomly divided to two groups, including experimental and control groups (22 participants in each group). They were excluded if they had notified any of the succeeding states: Parkinson's symptoms, neurologic diseases, diabetes, cardiovascular diseases, and diseases of the musculoskeletal device, such as waist pains and lower extremity pains. Ethics approval was obtained, and informed consents were approved by the institutional research ethics committee [NMAPE, (2016) No. 04112-12]. Every participant was informed of this research and provided a signed informed consent before data collection. During the study, participants, who had an illness and those, who were taking medications were excluded from the study.

The NPT program consists of a combination of different types of exercises, such as balancing, dynamic, plyometrics, strengthening, stretching and agility exercises, not taking in account special sports exercises (21). The experimental group performed the NPT protocol, 20 minutes from the beginning of every exercise session (rather than general warm-up routines) and were then followed by 45 minutes of weight training exercises similar to the control group. Parts of the NPT program are presented in Table 1.

Table 1. Components of the Neuromuscular and Proprioceptive Training Program

Members of the control group maintained their past exercise program (20-minute general warm-up routines comprising of dynamic, strength, and stretching exercises for the whole body and then 45 minutes of weight training exercises). These participants performed the exercise with another instructor during the intervention period. Exercise sessions conducted in both groups were similar and three times a week. Both groups performed a 10-minute cool-down. The 45-minute weight training exercise was based on the guidelines of American College of Sports Medicine (ACSM) and American Heart Association (AHA), which were modified with respect to the age of participants (22, 23).

Postural stability was checked in med-lat, ant-post plans under quiet standing on a foam mat with a force plate (Kistler Instrumente AG, Winterthur, Switzerland) before and after the 12-week intervention period for every participant. Subjects stood on the force plate with shoes and were instructed to stand normally as they would at home or at work (18, 19). Each participant performed a total of two trials of quiet stance with eyes open (EO) and closed (EC) within 30 seconds, and CoP was registered with a frequency of sampling of 200 Hz (18, 19). During the test, the participant observed front of himself a quadrilateral black symbol (2 × 2 cm) at a distance of two meters for the eyes open measurement. There was a five-minute rest period between each trial. The research method did not change during the study. To avoid losing participants, they were interviewed by using a questionnaire every month during the intervention. Participants were instructed to report any problems that could affect their involvement in the study.

Average of the two tests have been applied to statistical analysis (18, 19). Kolmogorov-Smirnov's test confirmed the normality of the distribution of data. For comparison of experimental and control groups, an independent t-test was used. The repeated measure analysis of variance (ANOVA) was carried out to assess the combined effect of the NPT program (experimental and control). The significance level was set at P < 0.05. Effect size was calculated and was interpreted to assess the impact of the NPT on the postural stability as ‘large’ (d > 0.8), ‘medium’ (0.2 < d < 0.5), and ‘small’ (d < 0.2) by Cohen (24, 25). intra-class correlations (ICC), coefficient of variation (CV) values and 95% confidence interval (CI) were calculated to assess intra/inter-session reliability. The ICC was categorized as follows: Excellent (0.75 to 1), moderate (0.4 to 0.74), and poor (0 to 0.39) (24). The statistical analysis was performed with SPSS (version 24.0; SPSS Inc.; USA) for windows.

a Different values of effect-size.

The med-lat results proved a significant difference between the two groups in the post-test, under EO and EC (P < 0.05). In comparison, both groups were significantly different from their baseline (P < 0.05). Furthermore, Cohen’s effect size value during the two conditions suggested a moderate to high powerful significance.

Comparisons of ant-post results between the two groups did not show a significant difference in the post-test and in EO and EC (P ≥ 0.05). In comparison, the two groups were significantly different from their baseline (P < 0.05). Furthermore, Cohen’s effect size value during both conditions suggested a low powerful significance.

Average speeds of med-lat and ant-post (ICC = 0.57 to 0.91 & 0.66 to 0.91, respectively) were the most reliable parameters and obtained very large ICC values in both visual conditions. The CV values of these two parameters followed a similar trend to that seen in intra-sessions, varying from 17% to 22%. All CoP parameters showed consistently higher ICC values when eyes were closed inter-sessions (ICC in EC = 0.79 to 0.86, ICC in EO = 0.74 to 0.81).

The present study results confirmed the hypothesis that 12 weeks of NPT will benefit middle-aged men. Numerous studies have shown that CoP mean velocity increases in biological aging, and aging is known to cause impaired postural stability (25-27). The slowdown recognized in this research is opposed to be age-related changes in CoP. As the average velocity of CoP is reliable (28) and a sensitive (29, 30) measure of CoP velocity displacement, the extant results are likely show that NPT positively affects postural stability, thereby validating the hypothesis of this research.

The training program and the time of each exercise session were the same in both groups, except the warm-up. Therefore, members of both groups had the same measurement conditions after each exercise session. The slowdown of CoP fluctuation after NPT occurred mainly in the med-lat plane. Earlier investigations showed that improved postural fluctuations in the med-lat plane are more strongly connected with balance deficiency following an increase and fall in age than postural fluctuation in the ant-post plane (31). Therefore, the present outcomes provide additional support of the idea that the NPT has positive effects on postural stability.

The sensorimotor system is due to the integration of sensory information (vestibular, visual and somatosensory systems) and provides stability of posture in quiet standing (32, 33). Amid these systems, it is assumed that proprioception of the lower extremity is one of the principal factors in control of the equilibrium in quiet standing (33, 34). Proprioception sensitivity of the lower extremity worsens with usual aging (35), and this deterioration has resulted in rising postural fluctuations and falls (35, 36). The velocity of nervous conductivity also reduces in normal aging (26, 37), and this reduction contributes to slow down of muscle reactions to postural perturbation, consequently increasing postural fluctuation (37, 38).

Some researchers consider that one of the factors promoting the rise in proprioceptive sensitivity (11, 26, 39) and velocity of nervous conductivity (11, 26, 40) by physical exercises is the temperature increase of the body. In this way, the beneficial effects of exercises may not last very long. The results of the present study are not consistent with these findings. The study groups performed a 20-minute warm-up for each exercise session, yet their results were different after 12-week. This suggests the NPT has more positive effects than the rise in body temperature. It could potentially compensate age-deterioration in mechanisms of postural control, thereby the postural stability improved and remained for a long time. Paillard Thierry also believed that non-intensive general and local exercises can also disturb postural control due to muscle fatigue (41), yet the participant's results were different in this study after 12 weeks. There were no trial restrictions, such as potential bias, analytical multiplicity, and so on.

The limitations of the study were that this study was conducted only for middle-aged men, and the allocation was at the time of randomization blinded for participants and investigators; yet due to the nature of the study, an allocation could not continue to be blind.

The NPT program makes sharp progressive impacts on the stability of posture in men of middle age and slowing down of CoP fluctuations during quiet standing. Thus, physicians, fitness counselors, and coaches will have a new choice when presenting sports programs for middle-aged men. Future studies should examine the effects of the NPT program on another gender and age group.