Electromyographic Activities of Cervical Muscles While Using an Oscillating Blade Held in the Mouth: Influence of Different Swings 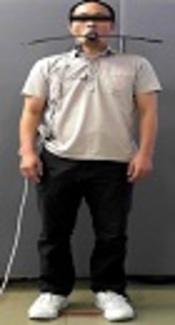 This study aimed to compare the activities of the cervical muscles while using an oscillating blade held in the mouth with different swings.

Ten healthy male university students participated in this study (20.8 ± 0.9 years). The activities of the sternocleidomastoid and cervical extensor muscles were measured using electromyography while using an oscillating blade held in the mouth in horizontal orientation (up-down oscillation). Participants were asked to oscillate the device in one of the following swings: Cervical flexion-extension and knee flexion-extension. Both exercises were performed in a standing position. All EMG activities were normalized by EMG activities during maximum voluntary contractions of those muscles.

The results of this study indicated that the exercise with knee flexion-extension had lower load for the cervical muscles than that with cervical flexionextension. The findings of this study could be basic information for grading intensity of cervical coordination exercise using an oscillating blade held in the mouth.

Neck pain is one of the most prevalent musculoskeletal conditions (1). Manual mobilization techniques plus exercise are recommended for treating people with acute neck pain with movement coordination impairments (2). Neuro muscular changes in response to training are specific to the mode of the exercise performed. Therefore, it is important to consider a safe and effective coordination exercise for the cervical muscles.

To estimate individual muscle activities by observing human movements is impossible. Electromyography (EMG) could be used to measure the electrical muscle activity levels. Quantitative data, normalized with respect to maximal voluntary contractions (MVC), are required to select the most appropriate intensity of coordination exercise for the cervical muscles. A previous study classified muscle activity of 0% to 20% of the MVC (%) as “low”, 21 to 40% as “moderate”, 41 to 60% as “high”, and greater than 60% as “very high” (11). Additionally, a muscle activity of more than 40% - 60% indicates a muscle strengthening stimulus (12). To obtain a muscle endurance capacity or to maintain stability is less than 25% (12). However, there is no study about the activities of the cervical muscles while using an oscillating blade held in the mouth. To achieve up-down oscillation of an oscillating device held in the mouth in a horizontal orientation, swings used would be cervical flexion-extension or knee flexion-extension in the standing positon.

This study aimed to compare the activities of the cervical muscles while using an oscillating blade held in the mouth with different swings.

Ten healthy male physiotherapy students of the Kawasaki University of Medical Welfare were recruited through advertisements. The mean (± standard deviation) age, height, and weight of the subjects were 20.8 ± 0.9 years, 165.8 ± 5.2 cm, and 65.1 ± 12.3 kg, respectively. Participants were excluded if they had neck pain over the previous year, a history of orthopedic disorders affecting the neck or neurological disorders. This study was conducted with approval of the Research Ethics Committee at Kawasaki University of Medical Welfare (#18-023). Written informed consent was obtained from all subjects. The protocol for this study is consistent with the ethical guidelines of the 1975 Declaration of Helsinki.

EMG were recorded using disposable surface electrodes (Blue Sensor P-00-S; Mets Co. Ltd., Tokyo, Japan). Bipolar electrode pairs were placed longitudinally over the muscle at 2.5-cm intervals. A grounded electrode was placed over the right collarbone. EMG were recorded from the right sternocleidomastoid muscle midway between the mastoid process and manubrium of the sternum and from the C4 cervical extensor muscles 2 cm lateral to the C4 spinous process using an EMG system (MyoSystem 1200; Noraxon Inc., AZ, USA). The EMG signals were band-pass filtered (10 - 500 Hz) and stored at a sampling frequency of 1000 Hz.

An oscillating blade (Facial Fitness PAO; MTG Co. Ltd., Aichi, Japan) is a flexible polyurethane with a natural frequency of 2 - 3 Hz (width, 540 mm; depth, 65 mm; height, 35 mm; and weight, 1.7 N) (Figure 1). The activities of the sternocleidomastoid and C4 cervical extensor muscles were measured for 5 s while using the oscillating blade held in the mouth in horizontal orientation (up-down oscillation) (Figure 2). After a brief instruction and practice session, participants were tasked to oscillate the blade over a 15-s period in one of the following swings: Cervical flexion-extension and knee flexion-extension. Both tasks were performed in a standing position. Participants were also asked to keep the amplitude of the outer blade at the height of the eyebrows when the outer blade rises remarkably during oscillation. During the practice and recording, visual feedback was obtained from the participant using a mirror that was positioned 1.5 m away from the participant’s face. Verbal instructions for cervical flexion-extension and knee flexion-extension tasks were “use your cervical flexion-extension in achieving oscillation” and “isometrically hold your cervical joints and use your knee flexion-extension in achieving oscillation,” respectively. The order of the tasks was randomized. Data were collected two times for each task. The average EMG values during the task were normalized relative to the MVC (%), which was obtained in the isometric maximal exertion tasks, using a standard manual muscle test described by Hislop et al. (13). The MVC was held for 5 s and the average EMG values were used. Figure 2. An oscillating device by holding in the mouth in horizontal orientation

The statistical analyses were performed using SPSS Statistics 23 for Windows (IBM Inc, Chicago, IL). After using the Shapiro-Wilk test, the reliability of the measured values of the activities of the cervical muscles were examined by calculating the intraclass correlation coefficient (ICC1, 2). The standard error of measurement

and the minimal detectable change for a 95% confidence interval

were calculated (14). The paired t-test was used to examine the significance of differences between swings. P values < 0.05 were considered statistically significant. The G-Power software (Franz Faul, University Kiel, Germany) was also used to calculate the post-hoc effect size and the actual power of the sample.

This study quantified the activities of the sternocleidomastoid and cervical extensor muscles while using the oscillating blade held in the mouth. In the both tasks, motion in the participant’s neck must be minimized to achieve oscillation at its natural frequency; excessive neck movement interferes with coordination necessary to isolate reciprocal motion to the head (5, 7), and coordinately induced “low” muscle activity of the sternocleidomastoid and cervical extensor muscles (11). The intensity of both cervical muscles may be suitable in providing endurance and stability (12).

Our participants were healthy, thereby limiting the generalization of our findings to individuals with reduced neck muscle performance. Additional research must be conducted in populations with neck pain to increase the clinical applicability of our findings. Before data collection, the subjects were trained by the same investigator to perform the tasks. However, we did not record oscillation of the blade during the tasks. Thus, we cannot claim that the oscillation of the blade was uniform across the subjects.

The authors wish to acknowledge their gratitude to the students of Kawasaki University of Medical Welfare.