The Relationship Between Depressive Symptoms and Oral Health Among Elderly People 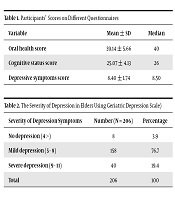 Depression and oral health problems are common in the elders. They are often not well-diagnosed and treated properly.

This study was conducted to determine the prediction role of depressive symptoms on the oral health of elderly people.

Untreated depression significantly reduces the quality of life of elders and their families (1). The prevalence of significant symptoms of depression among the elderly in the Iranian community is between 8% to 15%, and in elderly people live in nursing homes about 30% (2). Depressed elders often have demonstrations like dementia and perform poorly in mental tests (3). As age increases, the risk of progressive disease, especially cardiovascular disease, increases the risk of depression.

According to recent studies, the salivary reduction, due to depression and lack of motivation for self-care, may provide the basis for the growth of pathogenic bacteria and tooth decay (4, 5). Antidepressants can also cause hypo-salivation. Depression may also contribute to impaired immune function and is associated with an increased risk of infection (6). The results of one recent systematic review and meta-analyses studies showed a positive association between depression and oral diseases, specifically dental caries, tooth loss, and edentulous in adults and elders. The authors believed that more longitudinal studies are required to test the causal and temporal relationship between depression and oral health status (7). However, the findings of some studies did not show a relationship between the symptoms of depression and periodontal diseases (8, 9).

Polypharmacy is common in Iranian elders because of their chronic illnesses (10). The side effects of these medications, such as dry mouth, can compromise the care of oral health. Besides, movement disorders, stroke, and impaired vision in elders prevent efficient and adequate brushing or flossing (11). Moreover, in Iran, statistics are not satisfactory when 60.6% of elders have oral and dental problems (12, 13). The Global Burden of Disease study, in 2010, indicated that the most significant burden due to dental caries and periodontal disease were found in Iranians aged 15 - 49 and 50 - 69 years, respectively. In addition, mouth cancer led to the highest-burden in Iranians older than 70 years of age (14).

Failure to observe oral hygiene not only causes the disease of the oral cavity but can also threaten the vital organs of the body and even cause death of the patient (15).

Regarding the lack of conducting such a study on the elders in our country, this study was designed to determine the predicting role of depressive symptoms on the oral health of elderly people.

In this descriptive correlation cross-sectional study, 206 elders were selected among the older people of the health centers of Qaemshahr. This study was approved by the Ethics Committee of Mazandaran University of Medical Sciences, Sari, Iran (IR.Mazums.REC.95-2236). Written informed consent was obtained from the elderly people.

The population of this study included all the elders with health records in the Health Centers of Qaemshahr, Iran, in 2016. The sampling method was stratified randomly. Five out of 12 centers in the North, South, East, West, and Center of the city were randomly selected, and the number of elders of each center was calculated relative to the total amount of elderly people. From the above centers, a contact list of the elders was made. According to Hair et al., the sample size can be estimated by considering the number of variables. For each variable, five to 20 participants should be undertaken (16). The present study included 16 variables, therefore, 192 subjects were calculated. A total of 206 individuals gave consent to be part of this study. The inclusion criteria included individuals at or above the age of 60 and without any history of hypothyroidism, stroke, and dementia (17). The exclusion criteria included unwillingness of patient for co-operation; all subjects signed the consent form.

The GOHAI designed by Atchison (1990) to assess oral health was validated and has been reliable for Persian culture. Cronbach’s alpha was 0.74 (20). The questionnaire has 12 questions regarding physical, psychological, and social domains. This questionnaire uses a 5-point Likert scale for each item including always (1), most often (2), sometimes (3), rarely (4), and never (5). Questions 3, 5, and 7 are scored reversely. The range of scores is from 12 to 60 and a higher score indicates better oral health condition (20).

The GDS evaluates depression symptoms in elders with 15 questions. The scoring system is dichotomous (yes/no). Scores 0 - 4 in this scale indicate no depression, 5 - 8 mild depression, 9 - 11 moderate, and 12 - 15 severe depression. Validity and reliability of this questionnaire were assessed in Iran, with a cutoff point of eight, sensitivity of 0.9, and specificity of 0.84 (21).

The results of the study showed that over 67% of participants had mild depression (using GDS) (Table 2).

Table 3. The Relationship Between Oral Health and Different Variables in Qaemshahr Elders (N = 206)

All of the variables that had a significant relationship, along with the variables which had P < 0.3 (gender, marital status) were included in the regression model (Table 4). In multiple regression analysis, only the depressive symptoms and the cognitive status were those factors that could predict oral health. The predictive power of this model was 24% (df = 11, P < 0.001, F = 4.8).

The present study confirmed that elders who had depression did not look after their oral health properly. This finding was in line with the results of the previous studies that showed the highest frequency (76.7%), which related to mild depression, economic and cultural factors such as previous use of medication, ease of access to non-prescribed medication, and other people’s recommendations, which result in widespread antidepressant self–medication (22). The regression analysis also provided evidence that the oral health condition might be compromised because of elders’ cognition. This finding was in concert with the results of a systematic review and meta-analysis that showed that psychiatric conditions are among the most common self- medicated diseases in Iran (23).

The results of multiple regression analysis indicated that depression symptoms predict oral health in the elderly. This finding corresponds with the study of Hybels et al., on 944 elderly people in the United States (24). However, it does not match with the study of Kim and Won, in Korea (9) and Solis et al. (8). In the study of Hybels et al., after controlling demographic variables, health status and dentition, moderate depression, and low oral health status were significantly correlated. The studies of Kim et al., and Solis et al., did not show a meaningful relationship between depression and periodontal disease (8, 9). The two mentioned studies were not performed on the elderly age group. In some of these studies there was a significant relationship between the symptoms of depression and low oral health (25) or the quality of life associated with oral health (26). In the study of Okoro et al., people with recent depression also had a greater risk of tooth loss (27). Symptoms of depression may affect oral health through some biological pathways. Depression may play a role in stimulating the production of inflammatory cytokines and impairment in immune function in the development of periodontal disease and oral infections (6). In addition to the lack of motivation for self-care, it may provide a potential for pathogenic bacteria and tooth decay by reducing oral salivation. Antidepressants can also reduce salivation.

The findings of bivariate analysis showed there is no significant relationship between gender and oral health in the elders. This finding did not correspond with the study of Hernandez-Palacios et al., in Mexico (28). On the other side, some studies have shown that caries rates are higher in women than in man (29, 30). More caries risk among women may originate a different salivary composition and flow rate, hormonal fluctuations, genetic variations, and dietary habits (31). People with a vegetarian diet were found to have the highest numbers of caries. A lack of putrefaction, due to protein consumption, contributes to the formation of a less acidotic oral environment (32).

There was a significant relationship between oral health in elders and their socioeconomic status (SES). The SES usually includes annual income and education. Such a finding was a support to the previous studies where oral health may be a low priority among low income and low educational level older adults because they first have to meet their primary needs (28). Another study in London showed there was a significant relationship between education and oral health quality of life in elders, which was not explained by differences in income (33). Therefore, cultural factors related to oral health needs to be assessed.

The present study did not include the nutritional status and the ability of self-care in elders as the risk factors. Future studies may find different direct or indirect effects on the results of this study.

We would like to thank the Research Deputy of Mazandaran University of Medical Sciences, Director of Ghaemshahr Health Center, physicians, families, other colleagues, participating older individuals, and all those that helped in this project.