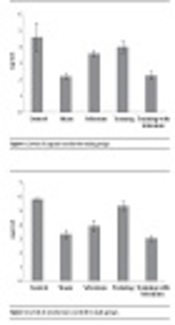 Cadmium has negative effects on various tissues of the body while selenium has antioxidant activities. Moreover, the benefits of exercise training for apoptotic factors including caspase-3 and cytochrome c, as well as cyclin D, have been regarded.

Therefore, the present study aimed to evaluate the anti-apoptotic effects of continuous training and selenium consumption on the liver tissue of cadmium-exposed rats.

It appears that continuous training and selenium consumption have interactive anti-apoptotic effects in the liver tissue of cadmium-exposed rats.

Cadmium is one of the environmental pollutants that produces high levels of toxicity in the liver, thus increasing liver enzymes and inducing apoptosis from the pathway of caspase activation (1). During apoptosis, due to the fragmentation and detachment of the protein from the small and large subunits, procaspase is converted into an active caspase. The active caspase affects other specific sites of caspases, which can activate their lower caspases, causing a proteolytic cascade. Next, the active caspases break other key proteins in the cell. Another group of caspases can break proteins that inhibit DNA degrading enzymes; thus, DNA breaks down in the nucleus of the cell with the release of DNAases (2).

Cadmium damages many tissues, such as the pancreas, liver, lungs, testicles, and kidneys. The main tissue of the body that is affected by cadmium is the liver because this metal increases oxidative pressure (3). A study has shown that in rats exposed to dextran sodium sulfate, this toxic substance increased the oxidative stress and apoptotic-inducing factors. In contrast, in rats that performed continuous swimming one to 1.5 hours daily for seven weeks, apoptotic factors such as caspase-3, cytochrome c, and Bax showed significantly lower values than in the group receiving dextran sodium sulfate (4). In the same vein, it was reported that the Bax gene expression and the ratio of Bax to Bcl2, which are factors in the production of caspase-3, were lower in rats that performed running on a treadmill for 12 weeks than in those that did not perform any physical activity (5).

Selenium, as an essential ingredient, is naturally occurring in soil, water, and many foods, and given its antioxidant properties, it is essential for health (6). According to the literature, cadmium consumption increases caspase-3 and cytochrome c from the pathway of peroxisome proliferator- activated receptor gamma/phosphoinositide 3-kinase/Akt (PPAR-γ/PI3K/Akt) and thus, induces apoptosis in the pancreatic tissue; however, in groups receiving selenium, the effects of apoptosis induced by cadmium had a significant decrease (7). In the review of the effects of selenium and cadmium on apoptosis, researchers concluded that selenium is effective in reducing the induction of cadmium-induced apoptosis (8). In mammalian cells, there are three types of cyclins, D1, D2, and D3 (9). In a study of embryonic fibroblasts cells, it was concluded that cadmium increases cyclin levels (10). Moreover, in another study conducted on rats performing endurance swimming, exercise training reduced the apoptosis-inducing factors in the liver tissue of cadmium-receiving rats (11).

Considering the contradictions reported in some studies, as well as the effects of selenium on reducing the production of free radicals and inflammation and the strengthening of antioxidant defense devices, and the effects of continuous training on reducing the apoptosis-inducing factors, the aim of this study was to determine the interactive effects of continuous exercise and selenium consumption on caspase-3, cytochrome c, and cyclin D in the liver tissue of cadmium-exposed rats.

The present experimental study was conducted at the Animal Lab of Marvdasht Branch of Islamic Azad University, in which 25 male rats (Sprague Dawley) were purchased from the Animal Breeding Site of the university. In order to ensure that the rats were adapted to the laboratory environment, they were kept in clear polycarbonate cages with humidity of 45% to 55%, the dark/light cycle of 12/12 hours, and temperature of 23°C ± 2°C. During the study, a standard diet of pellets and water was given to rats ad libitum. After one week, rats were randomly divided into five groups of five rats, including: (1) control, (2) selenium, (3) continuous training, (4) continuous training with selenium consumption, and (5) sham. The study was approved by the Local Ethics Committee of the Sport Sciences Research Institute of Iran.

Groups 1 to 4 received cadmium (2 mg/kg) daily for two weeks peritoneally (12). A cadmium solution was prepared by dissolving cadmium chloride in normal saline on a daily basis to administer the aforementioned dosage. During the study, rats in the sham group received 2 mg/kg of cadmium-free solution (normal saline) daily. Groups 2 and 4 received peritoneal selenium (0.23 mg/kg) in the form of sodium selenite daily (13). Groups 3 and 4 performed continuous training on a rat’s treadmill three sessions a week for eight weeks (14).

To evaluate the maximum speed running, we used Bedford et al. incremental test (15) as standardized by Leandro et al. (16) for rats. The continuous training protocol consisted of three stages of warming up (5 minutes), the main training, and cooling down (5 minutes). Rats in the continuous training groups first warmed up on the treadmill for 5 minutes at an intensity of 50% - 60% of VO2max. Then, they performed continuous training at an intensity of 65% of VO2max in the first week, 70% of VO2max in the second week, and 75% of VO2max since the third week onward. The duration of the continuous training was 6 minutes in the first week, 14 minutes in the second week, 22 minutes in the third week, and 30 minutes from the fourth week to the eighth week. At the end of each session, 5 minutes of cooling down at an intensity of 50% to 60% of VO2max was performed. Finally, 48 hours after the last training session and last injection of cadmium and selenium in the eighth week, the rats were anesthetized by peritoneal injection of ketamine and xylazine and their liver tissues were removed to measure the variables of research.

In order to measure caspase-3, cytochrome c, and cyclin D by Enzyme-linked immunosorbent assay (ELISA), the liver tissue was placed in a microtube after washing with normal saline and freezing in a nitrogen tank at -80°C. In accordance with the instructions of the kit manufacturer, 100 mg of the frozen tissue was ground into a powder to measure the protein level of caspase-3 (CSB-E08857r. Cusabio Biotech Co., USA) and cytochrome c (CSB-E14281r. Cusabio Biotech Co., USA). For the homogenization of tissues, Phosphate-buffered Saline (PBS) solution was used to combine one milliliter PBS and one mg of the tissue. After storing the mixture at -20°C, freezing, and melting twice, it was centrifuged for 5 minutes at a temperature of 2°C -8°C at a speed of 5000 rpm to break the cell wall. Then, cytochrome c and caspase-3 were measured immediately using standard solutions. To measure the protein level of cyclin D, the ELISA kit (SEA585Ra 96 Tests, Cloud-Clone Corp., USA) was used according to the manufacturer's instructions.

The Shapiro-Wilk test was used to investigate the normal distribution of data. To determine the effect of continuous training and selenium consumption on research variables, the two-way ANOVA and independent samples t-test were used in SPSS (version 21) software. The significance level was set at P ≤ 0.05. Figure 1. Levels of caspase-3 in the five study groups Figure 2. Levels of cytochrome c in the five study groups Table 2. Results of Two-Way ANOVA on the Effects of Continuous Training with Selenium Consumption on Cytochrome c, Caspase-3, and Cyclin D in Rats Exposed to Cadmium

Apoptosis is one of the most common ways to remove unwanted cells, which occurs in the body of multicellular and even monocellular organisms. In this process, the cell is responsible for its own death; thereby, it is also called cell suicide. By applying this process, the immune system performs many of its anti-antigen activities. Caspases are the most active executive members of the set. The name of caspase (cysteine aspartate-protease) is taken from their functions. According to a theory, the Apaf-1, caspase-9, and cytochrome c complexes can activate caspase-9 activation. Caspase-9 enzyme activation results in caspase-3 activity. Caspase-3 performs various actions as the executive member of this set (18).

Cyclin D is a promoter of the cell cycle during the G1 stage, which drives the cell cycle into the S stage. This protein plays a key role in cell proliferation, cell growth regulation, and mitochondrial activity fluctuations (19). Based on research conducted on prostatic epithelial cells, cadmium reduces the protein level of cyclin D (20), which is parallel with the findings of the present study.

The current study also showed that continuous training significantly decreased caspase-3 and cytochrome c and increased cyclin D in rats exposed to cadmium. In this regard, swimming endurance training in pregnant rats resulted in a significant reduction in apoptotic indices in the liver tissue of cadmium-receiving neonatal rats (21), which is parallel with the findings of the present study.

Moreover, in line with the findings of the present study, it has been shown that continuous training increases Bcl2 as an anti-apoptotic factor and decreases Bax as an inducer of apoptosis in cadmium-exposed rats (22). In addition, some studies have concluded that physical exercise may increase cyclin D levels in nerve cells of rats (23). In this study, selenium consumption resulted in a significant reduction in caspase-3 and cytochrome c and a significant increase in cyclin D in cadmium-exposed rats.

Selenium is an essential ingredient in selenocysteines. The selenoproteins, including glutathione peroxidase (GPXs), effectively perform antioxidant activities and protect against the reactive oxygen and nitrogen species (ROS and RNS); however, over-consumption of selenium can also be toxic to the body (24). In many studies, cell proliferation, control, or death and hemostasis in many tissues, as well as the control of cell cycle and the process of apoptosis, have been reported to be the effects of selenium in the body (25).

Selenium deficiency increases the expression of miR-193b-3p (microRNA-193b-3p) gene, which reduces the gene expression of Mastermind-like protein 1 (MAML1) and thus increases hepatocyte apoptosis (26). In Binte Hossain et al.'s study, the levels of glutathione and glutathione peroxidase 1 (GPx1) were higher in groups co-administered with cadmium and selenium than in the cadmium-only group. Selenium also reduced cytochrome c and decreased apoptosis (27).

There are some limitations to this study, such as the lack of controlling for calories in the tissues of the rats, the multiplicity of the factors signaling the apoptotic pathway, and cell proliferation. Therefore, it is suggested that future studies investigate the different doses of cadmium and selenium in different tissues and examine other factors of apoptosis and cell proliferation to achieve more reliable and dependable results. In addition, the effect of cadmium via peritoneal, oral, and inhalational administrations should be compared.

Based on the findings of the current study, continuous training and selenium consumption alone can decrease the apoptosis protein factors of caspase-3 and cytochrome c and increase cyclin D in the liver tissue of rats exposed to cadmium. In addition, continuous training and selenium consumption have interactive effects on cyclin D in cadmium-exposed rats; however, the interactive effects were not significant in reducing caspase-3 and cytochrome c.

The present study is part of a doctoral dissertation approved by Shoushtar Islamic Azad University. The authors express their gratitude and appreciation to the Research and Technology Department of the University.