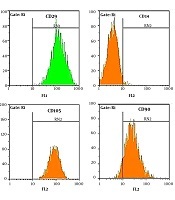 Recently, because of the demand for cell therapy, stem cells researches have been increased. Improvement in stem cell proliferation promotes the use of these cells in cellular treatments.

The aim of this study was to improve the culture conditions of adipose-derived stem cells (ADSCs) by treatment of these cells with a nontoxic concentration of ciprofloxacin.

ADSCs were prepared from the human and animal cell bank of Iranian Biological Resource Center. The microbial contamination of cells including bacteria, fungi, and yeast had been tested. Adipogenic and osteogenic differentiation potential of ADSCs was demonstrated and the expression of surface markers including CD45, CD29, CD90, CD34, and CD105 was confirmed by flow cytometry. In the presence of ciprofloxacin at different concentrations, the viability of the cells was measured by MTT assay and the expression of the Oct-4, Nanog and GAPDH were examined by real-time PCR in a nontoxic concentration of ciprofloxacin-treated cells compared to control group.

The present study shows that due to increased expression of Oct-4 and Nanog in 10 μg/mL ciprofloxacin-treated cells, the use of ciprofloxacin during the ADSCs culture period could provide suitable conditions for maintaining stem cell properties in these cells.

In recent years, studies in stem cells have been developed with increased demand in treating diseases (1, 2). Mesenchymal stem cells (MSCs) has attracted the attention of researchers today. These cells have been found in many specialized tissues such as adipose tissue, bone marrow, dental pulp, liver, corneal, and other body parts (3-5). MSCs have significant potential in treating diseases and cell therapy (6). The importance of MSCs in cell therapy has led to the publication of valuable scientific research in this field (7). Adipose tissue is an autologous and easily accessible source of MSCs that could be obtained from patients with a minimally invasive procedure (8, 9). Adipose-derived stem cells (ADSCs) are one the suitable source of MSCs which show high differentiation potential and could be harvested from adipose tissue easily (10).

Improvement of MSCs stemness can be considered as a promising topic in cell-based therapies. Kiratipaiboon et al. have found that ciprofloxacin treatment of human dermal papilla stem cells can improve the stemness of these cells (11). They have shown that colony formation and stemness properties of dermal papilla stem cells decrease gradually in a time-dependent fashion during the cell culture. Nonetheless, treatment of cells with nontoxic ciprofloxacin can maintain self-renewal, colonization, and stem cell markers. Ciprofloxacin acts through ATP dependent glycogen synthase tyrosine kinase, which causes an elevation of β-catenin (12). In addition, ciprofloxacin induces an epithelial-mesenchymal transition which is associated with upregulation of ZEB1 and Snail transcription factors.

Stemness maintaining of MSCs without reducing their fundamental characteristics during the cell culture is one of the most important issues in stem cell research. It is also important to isolate and expand MSCs with minimal harm to the patients.

The aim of this study was to investigate self-renewal markers expression alterations in ADSCs following ciprofloxacin treatment. MTT assay was performed to evaluate the cytotoxicity level of ciprofloxacin (sigma) on human ADSCs (13). In this study, MTT was prepared as a 5 mg/mL in phosphate-buffered saline and ciprofloxacin was used at 0.05 μg/mL to 12 μg/mL concentrations. At first, ADSCs were seeded at a density of 7000 cells per well to a 96-wells culture plate in a volume of 100 μM DMEM+ 10% FBS medium. Then cells were incubated for 18 h under conditions of 5% CO2, 100% humidity, and 37°C. Different concentrations of ciprofloxacin were added to the wells and the untreated cells were considered as negative control and 10% DMSO-treated cells were used as positive control. The incubation was performed for 24 hours again. After incubation, 10 μL of MTT solution was added to each well of, and cells were incubated for 3 hours. Then, cell culture media were completely replaced with 100 μL of DMSO solvent per well. Cells were incubated for 1 hour under dark conditions. Finally, the optical density of each well was measured using an automatic plate reader with a 560 nm test wavelength and a 660 nm reference wavelength.

3.3. Evaluation of Morphological Changes of the Cells

During the cell culture, cells morphological changes and quality indicators related to cell health and death were evaluated by invert microscope.

After treatments, the cells were trypsinized and centrifuged. RNA extraction from the cell pellet was performed using RNeasy Plus Mini Kit according to the kit instructions.

Concentration and quality of extracted RNA were measured with a Nanodrop. Moreover, to investigate RNA integrity, extracted RNAs were loaded onto 2% agarose gel to view S18 and S28 ribosomal bands. After examining the quantity and quality of the extracted RNAs, cDNA synthesis was performed using the PrimeScriptTM RT reagent kit in accordance with the kit’s instructions. To evaluate the quantitative expression of Oct-4 and Nanog genes, real-time PCR was performed using the RealQ PCR Master (SYBR Premix Ex Taq II (Tli RNaseH Plus) on an Applied Biosystems StepOneTM real-time analyzer (10). GAPDH gene used as the reference gene. ΔΔCt method was used for analysis. The characteristics of primers used in this study are listed in Table 1.

Table 1. Primers Used in This Research

The data for each test were presented as mean ± SD. Statistical calculations were performed to determine the significant difference between the groups by Graph Pad Prism V. 6 software using one way ANOVA. Results were considered significant if P < 0.05.

ADSCs were characterized by flow cytometry (Figure 1) and observed under an inverted microscope every day (Figure 2). These cells show fibroblast-like morphology and were adherent to the surface with a high growth rate. Cell culture medium was replaced every three days, and cells have been passaged when the cells reached 80% confluence. During the culturing period, the cells were optimal and free from contaminations.

4.2. Determination of Non-Toxic Concentration of Ciprofloxacin with MTT Assay 4.3. Quantitative Real-Time PCR for Analysis of Oct-4 and Nanog Expression

After RNA quantitation and qualification (Figure 5) and cDNA synthesis, changes in Oct-4 and Nanog expression was evaluated in ADSCs treated with ciprofloxacin 10 μg/mL after two weeks compared to the control group. (Figure 6) Oct-4 and Nanog gene expression were normalized to GAPDG as reference gene. The results showed that Oct-4 and Nanog expression were increased 43% and 24% respectively in ciprofloxacin-treated ADSCs compared to the control group. This suggests the positive effect of ciprofloxacin on the growth of ADSCs.

Nowadays, the study of stem cells derived from different tissues is one of the interesting topics in cell therapy and medical research. This has made the researchers to improve isolation, culture, characterization and differentiation of stem cells to regenerate damaged tissues. Although bone marrow-derived mesenchymal stem cells (BM-MSCs) have been frequently used in stem cell research but adipose tissue is an easy-to-use and less invasive source of MSCs which can be harvested by surgical procedures such as liposuction. It has been shown the amount of stem cells derived from adipose tissue is more than that of bone marrow in the same volume (14-16). Therefore, ADSCs may have more advantages than BM-MSCs.

It has been demonstrated MSCs lose their stemness properties during colonization in vitro such as the ability to form colonies, differentiation capacity, and proliferation (17). Therefore, maintenance of stem cell properties for the propagation of these cells is essential in vitro. Stemness properties are maintained by various factors such as growth factors, cell-cell interactions, and extracellular matrix interactions (18, 19). In this study, we have shown ciprofloxacin could improve the stemness properties of ADSCs.

Ciprofloxacin belongs to the fluoroquinolones antibiotics which inhibit bacterial DNA replication and repair by controlling DNA gyrase enzymes (20). Ciprofloxacin is used to treat infections caused by gram-negative bacteria including Salmonella, Shigella, Campylobacter, Nyseries and Pseudomonas. On the other hand, this drug has moderate effects on gram-positive bacteria including Streptococcus pneumonia and Streptococcus faecalis. The ciprofloxacin is mainly indicated in the treatment of respiratory infections (other than Streptococcus pneumonia infection), urinary tract infections, gastrointestinal infections, including typhoid fever, bursitis, and septicemia, which are susceptible to microorganisms (21, 22). Furthermore, Ciprofloxacin is used as a prophylactic antibiotic to prevent bacterial infections in patients undergoing stem cell transplantation. In addition, this antibiotic is widely used in cell culture in vitro to prevent bacterial contamination including mycoplasma (23).

Kiratipaiboon and colleagues reported that the use of ciprofloxacin improved the stemness of human dermal papilla stem cell through Akt activation and ATP-dependent tyrosine kinase/glycogen synthase kinase3β dependent mechanism (11). They showed that colony formation and stemness of dermal papilla cells decrease gradually in a time-dependent manner during the cell culture process. Nonetheless, treatment of cells with nontoxic ciprofloxacin can maintain the morphology, colonization, and stem cell markers. Ciprofloxacin exerts its effect through Akt/GSK3β-dependent β-catenin pathway. Ciprofloxacin inhibits glycogen synthase kinase3β (GSK3β) function through Akt activation which leads to inhibition of β-catenin proteasomal degradation (11, 24). Self-renewal capacity of stem cell is increased through upregulation of, Oct-4 and Nanog (25). Akt activation leads to Oct4 phosphorylation which is associated with self-renewal of stem cells (26, 27). Moreover, β-catenin upregulation triggers Nanog expression through Oct-4 which boosts MSC self-renewal (28). Increased β-catenin activation could induce expression of epithelial-mesenchymal transition factors such as ZEB1 and Snail (29). The major limitations of this study were that we did not investigate the exact molecular signaling pathway underlying ciprofloxacin effect on ADSCs; however, the result of this research has shown ciprofloxacin could increase Oct-4 and Nanog as important self-renewal transcription factors.

Adipose tissue is an easily accessible, low-risk, and abundant source of MSCs. Maintaining the stemness properties of these cells in vitro is one of the most important and critical concerns in stem cell culture. The present study revealed that the use of ciprofloxacin during the culture period with a concentration of 10 μg/mL can create suitable conditions for the culture and maintain the stemness properties of these cells through overexpression of the Oct-4 and Nanog genes.