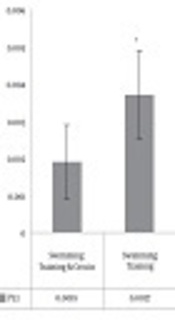 Obesity is a multi-factorial physical disorder that can lead to motor disorders and muscle mass loss. On the other hand, regular exercises and crocin consumption can exert anti-apoptotic effects.

The aim of this study was to investigate the effect of eight weeks of swimming training along with crocin consumption on the intrinsic apoptosis pathway in muscle tissue of obese rats.

It seems that crocin consumption along with training can modify and prevent the progression of apoptosis induced by obesity.

Nowadays, obesity as a major problem for global health is recognized as a multi-factorial physical disorder that results from high-calorie intake and low physical activity (1). Studies have shown that obesity is closely related to the development of diseases such as cardiovascular disease, cognitive impairment, cancer, motor disorders, and muscle mass loss (2, 3). Evidence also suggests that hyperglycemia is associated with elevated fat mass, leading to increased oxidative stressors, increased pro-inflammatory factors, mitochondrial dysfunction, and ultimately cell death (4). Previous studies have shown the role of the mitochondrial pathway as one of the planned death pathways. It seems that B-cell lymphoma-2 (Bcl-2) has a significant role in controlling apoptosis, especially in diseases related to skeletal muscle. The Bcl-2 pathway contains membrane-bound proteins that have anti-apoptotic subgroups such as Bcl-2 and Bcl-X and pre-apoptotic subgroups such as Bcl-2-associated X (Bax), Bid, and Bad. The ratio of anti-apoptotic proteins to pre-apoptotic proteins controls the permeability of the membrane and the function of the muscle cell nucleus (5). On the other hand, due to the ever-increasing prevalence of obesity, the need for managing and planning for its treatment is evident. Researchers believe that treatment of obesity with nutritional control, behavioral therapy, and lifestyle change along with preventing obesity can be introduced as appropriate strategies (6).

Crocin is one of the natural antioxidant ingredients found in saffron. Previous studies have reported antioxidant, anti-inflammatory, anti-diabetic, and metabolic-improving effects of this compound (7-10). On the other hand, most researchers believe that although the change in the diet and the use of natural supplements can be effective in modulating the effects of obesity, the role of regular physical activity in controlling weight and reducing the effects of increased fat mass is well known (11).

It seems that regular exercise activities can prevent tissue damage by reducing oxidative stress and increasing antioxidants. However, the intensity of exercise, the type of exercise, and the length of the training period are among the most important factors in the anti-apoptotic effects of sports exercises (11, 12). It was found that high-intensity interval training and low-intensity continuous training had significant effects on increased Bcl-2 and decreased P53 levels in the heart tissue of rats although low-intensity continuous training had no significant effect on reduced Bax level in rats (11). Moreover, high-intensity interval training was effective on reduced caspase-9 levels in the heart tissue of rats with myocardial infarction (12). It seems that the type of training and training physiology in different settings have different effects on the physiology of the body, as the study by Charmas and Gromisz stated that swimming training had a significant effect on the improvement of physical composition (13). In addition, sports exercises along with crocin and saffron consumption had significant effects on the improvement of apoptosis in the cardiac tissue (10) and pancreas (14) and improved the sugar and metabolism parameters (15) in rats with type 1 and type 2 diabetes.

Given that the introduction of the best training procedure for weight loss and management of obesity is necessary and since there are limited studies on the effects of concurrent use of crocin and swimming training on apoptosis induced by obesity in muscle tissue, the present study was conducted to provide further information in this regard. Thus, the aim of this study was to investigate the effect of eight weeks of swimming training along with crocin consumption on the intrinsic pathway of apoptosis in muscle tissue of obese rats. Therefore, the hypothesis of the present study was that swimming training with simultaneous consumption of crocin has interaction effects on the improvement of the intrinsic pathway markers of apoptosis in muscle tissue of obese rats.

In this experimental study, first, 35 male Sprague-Dawley rats (age: eight weeks, weight: 150 ± 30 g) were purchased and transferred to the Animals’ Sports Physiology Laboratory of Islamic Azad University of Marvdasht. The rats were kept in clear polycarbonate cages with humidity of 45% to 55%, the dark/light cycle of 12/12 h, and temperature of 23ºC ± 2ºC.

After 48 h of the last training session at the end of the eighth week, rats were surgically operated to evaluate the study parameters. They were anesthetized with ketamine 10% and xylazine 2% after about 5 min. Then, soleus tissues were extracted by experts and after putting in a cryotube, they were placed in liquid nitrogen and stored at -70ºC for further study. After transferring the tissues to the laboratory, the measurements of Bcl-2, Bax, and P53 gene expression levels were done using Real-Time PCR (Yekta Tajhiz Company). The sequence of primers used is shown in Table 1.

The Shapiro-Wilks test was used to check the normality of data and the one-way ANOVA followed by Tukey's post hoc test was employed to analyze the data in SPSS (version 21) software. Statistical significance was set at 0.05. Bax gene expression in the muscle tissue of obese rats in research groups. *A significant decrease in the crocin, swimming training, and swimming training plus crocin consumption groups compared to the control group (P ≤ 0.05) P53 gene expression in the muscle tissue of obese rats in research groups. *A significant increase in the swimming training group compared to the control, sham, crocin, and swimming training plus crocin consumption groups (P ≤ 0.05)

The results of the study showed that eight weeks of swimming training had a significant effect on the Bax decrease and P53 increase in the muscle tissue of obese rats; however, there was no significant effect on Bcl-2. Studies have shown that with the development of obesity, reactive oxygen species (ROS) increase the pre-inflammatory cytokines of the nuclear factor kappa-light-chain-enhancer of activated B cells (NF-κb), which is followed by NF-κb in the nucleus to transcribe immune and especially inflammatory proteins, such as tumor necrosis factor alpha (TNF-α) and IL-1 (19). Hyperglycemia also increases the expression of Bax protein by increasing free radicals of hydroxyl (OH) and the translocation of Bax into mitochondria leads to the release of cytochrome C, resulting in the activation of caspase 3 and apoptosis. As fat mass increases, muscle atrophy factors, such as Myogenin-5 (Myf5), paired box protein 7 (Pax7), and engrailed-1 (En1), are produced (20). Researchers believe that performing sports activity from the pathway to free radicals and ROS inhibits downstream apoptosis pathways. Moreover, the increase of protein kinase B (PKB) is a major actor in the phosphatidylinositol-3 kinase (PI3K) signaling pathway that plays a role in cellular processes, including cell survival, metabolism, cell growth, and proliferation. Increased expression and enhanced PKB activity inhibit apoptotic pathways by phosphorylation of anti-apoptotic proteins of the Bcl-2 family and inactivation of apoptotic promoter proteins such as Bax and BAK or directly by controlling caspase activity (12). However, researchers believe that physical activity is a potential source of oxidative stress and can lead to the imbalance of pro-inflammatory and inflammatory cytokines and cell death (21). Therefore, different results from swimming training, such as decreased Bax and increased P53, can be explained. Different studies have assessed the effects of sports exercises on Bcl-2 and Bax. Consistent with this study, 12 weeks of aerobic training on a treadmill could reduce Bax levels and increase Bcl-2 in obese rats (22); moreover, 10 weeks of moderate aerobic exercise increased Bcl-2 and decreased Bax and caspase 3 in diabetic rats (19). It seems that the duration of sports exercise and the difference in the type of tissue under evaluation may be the reasons for the incompatibility of the results reported in different studies. In addition, the role of different exercises and their anti-apoptotic effects on skeletal muscles have not been fully understood; so more extensive studies are needed in this regard.

The results of this study showed that the levels of Bax gene expression decreased significantly after eight weeks of crocin consumption; however, crocin consumption had no significant effect on P53 and Bcl-2 in the muscle tissue of obese rats. Planned cell death is one of the most important body functions for the development or homeostasis of body tissues. Crocin is a chemical extract from saffron, which can have anti-apoptotic effects in cells depending on the dose and duration of administration. It seems that crocin can inhibit the progression of apoptosis by increasing antioxidant enzymes to inhibit the release of cytochrome-C, Apaf-1, and procaspase-9 in the cytosol because the release of cytochrome-C can increase procaspase-9, which in turn produces caspase subtypes of caspase-3 as an effective factor in increasing Bax and P53 and decreasing Bcl-2 (23). Various studies have been carried out on the effects of crocin consumption on cell apoptosis in human and animal specimens. For example, crocin consumption increased the death of cancer cells in women with breast cancer (23) and lung cancer (24). On the other hand, crocin consumption significantly reduced P53 levels in the heart tissue of diabetic rats, but did not have a significant effect on Bax and Bcl-2 (11). Researchers propose that saffron and crocin act dose-dependently. However, regarding the evaluated tissue, various results have been reported so it seems that the dose used in this study could reduce Bax in the soleus tissue of obese rats; however, in Hassanpour et al. study, it decreased P53 in the heart tissue of diabetic rats with high-fat diet and streptozotocin (11). Moreover, the results of this study showed that eight weeks of swimming training with crocin consumption had a significant effect on reduced Bax expression in the soleus tissue of obese rats, but had no significant effect on P53 and Bcl-2.

Considering the studies previously conducted, it seems that the interaction of sports exercise and crocin consumption through increasing antioxidants, decreasing oxidative stress, and controlling caspase proteins can prevent progressive apoptosis due to obesity and overweight (21-23). However, the type of exercise can also have apoptotic effects (22).

The lack of calorie control in all groups and the use of different methods of measurement such as western blot are some limitations of the present study. Therefore, it is suggested that future studies investigate the different doses of crocin in different tissues and utilize other methods of measurement like western blot for apoptotic markers. Moreover, considering the effect of ROS and caspases on the onset of mitochondrial apoptosis and the antioxidant effects of crocin, it seems that one of the limitations of this study is the lack of the measurement of oxidant and antioxidant levels. Therefore, it is suggested that future studies evaluate these factors along with the variables of the present study.

It appears that crocin consumption together with sports activity can moderate and prevent the progression of apoptosis due to obesity; however, more information is needed in this regard.

Considering the fact that the present study is part of a doctoral dissertation approved by Shoushtar Islamic Azad University, the authors of this article express their gratitude and appreciation for the spiritual support by the Research and Technology Department of the University.

Copyright © 2019, Middle East Journal of Rehabilitation and Health Studies. This is an open-access article distributed under the terms of the Creative Commons Attribution-NonCommercial 4.0 International License (http://creativecommons.org/licenses/by-nc/4.0/) which permits copy and redistribute the material just in noncommercial usages, provided the original work is properly cited.
download pdf 134.12 KB Get Permission (article level) Import into EndNote Import into BibTex
Number of Comments: 0