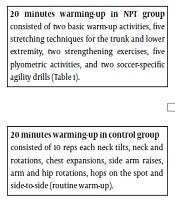 Exercise training appears to have an essential role in maintaining motor responses.

This study aimed to explore the steady-state postural response to neuromuscular and proprioceptive training (NPT) in active middle-aged women.

Forty-four active women (mean age, 53.2 ± 6.1 years) completed this cross-sectional study. During the 12-week study, the NPT group (n = 20) performed the NPT program, while the control group (n = 24) followed the usual warm-up routines. Postural stability in different visual conditions was measured in the anterior-posterior (AP) and medial-lateral (ML) planes during quiet standing on a foam mat at baseline and after the intervention using a force platform.

Postural steadiness is the ability to stand upright using the coordination and integration of data provided by the sensorimotor system (1). Researchers have shown that postural control deficiencies in the aging process can be linked to several factors, including deterioration of sensory systems (2), proprioception of lower extremities (3), and reduced muscle strength of lower extremities (4). With the beginning of the fourth decade of life, instability in the postural balance system gradually begins (5) and it gets worse as the age rises (2, 5), making it an essential social problem (6). While not all falls cause injuries, about 20% necessitate medical care, 5% lead to fractures, and 5% - 10% cause other serious injuries, such as severe head injury, dislocation, joint sprain, and soft tissue damage (7). After cardiovascular diseases, cancer, stroke, and pulmonary disorders, accidental damage is the fifth leading cause of death in the elderly and two-thirds of these deaths are due to falls (8). Therefore, to begin administering simple and low-cost treatment, early treatment of risk factors is essential.

The combination of various exercises such as balance, dynamic, plyometric training, strengthening, running, agility, and stretching, irrespective of specific exercises, is a source of neuromuscular and proprioceptive training (NPT) (9). The NPT integration in the warm-up is commonly utilized by some young athletes and has a positive effect on postural stability (10-12). However, it has not yet been proven whether the NPT integration in routine training sessions improves the ability to maintain balance in people of middle-age. The mean velocity of movement, which is a parameter of the center of pressure (CoP), can be differentiated correctly in various experimental situations and it also has a minimum standardized coefficient of interpersonal variation, i.e., the lowest reproducibility error (13). Therefore, this study used the measurements of mean CoP velocity in various directions to assess the postural stability of active middle-aged women. It was hypothesized that significant improvements in postural stability could be obtained through a 12-week NPT program for middle-aged women.

The objective of this study was to assess the impact of the NPT program, rather than general warm-up routines, on postural steadiness during quiet standing in active middle-aged women.

This cross-sectional study was conducted in autumn 2018 on 54 women selected through questionnaires and interviews at the Sports Medicine Center (Kyiv, Ukraine). The participants were divided into two groups by random distribution (using a manual lottery). Ten women were omitted throughout the study, seven of whom belonged to the NPT group. Therefore, 81% of participants (44 people) completed the study. The final sample size was 20 people in the NPT group and 24 people in the control group and we utilized their information in this study. Attending at least three exercise sessions per week and ages of 45 to 65 years were considered as the inclusion criteria. Neurological disease, cardiovascular disease, diabetes, Parkinson’s disease, musculoskeletal system disease (such as pain in the lower back and lower extremity), taking medication, and a history of falls were the exclusion criteria according to the physician’s diagnosis (14-16).

Subjects in the NPT group had a 20-min warm-up period with the NPT program and the control group performed body warm-up routines such as strengthening, stretching, and dynamic exercises for 20 min (Figure 1.). Each training session included a 45-min weight training, based on the recommendations of the American Heart Association and the American College of Sports Medicine (17, 18), and finally ended with a 10-min cool-down (Figure 1). The training sessions were the same in both groups and were conducted three times a week for 12 weeks. The NPT program was organized and monitored by the research team as provided in Table 1. Before the test, instructors and athletes became acquainted with the NPT and each training session was taught.

The general aspects of the two exercises programs (NPT vs. control).

Table 1. Neuromuscular and Proprioceptive Components of the Training Program

The participants were asked to preserve typical food consumption, two liters of water consumption per day, and eight hours of sleep. They were all informed of the study and provided their written informed consent prior to data collection after presenting a medical certificate proving that the intervention was not contraindicated. The Institutional Ethics Committee [NMAPE, (2018) No. 04112-12] approved the forms of informed consent and the use of human ethics based on the principles of the Helsinki Declaration. The absence of each participant was monitored weekly.

Table 2 shows the baseline descriptive characteristics of both groups. After anthropometric evaluations, postural stability was conducted among participants by measuring the mean CoP velocity during quiet standing (barefoot) before and after the 12-week intervention. A force plate (Kistler 9286AA, Kistler Group, Switzerland) was used to study postural steadiness during quiet standing on a foam mat with eyes open (EO) and eyes closed (EC) (5). This method was formerly applied to display the impacts of exercise on postural steadiness (19, 20), and was expected to be sensitive to alterations in postural steadiness (21). The length of each record in any visual condition was 30 seconds, followed by a short rest period for two minutes. All measurements were performed twice for each visual state, at a sampling rate of 200 Hz in the same order by the same trained instructors in the anterior-posterior (AP) and medial-lateral (ML) planes. During the test, participants were instructed to stand in a quiet position as their home or workplace and look directly ahead at a black spot (2 × 2 cm) at 2 m on the wall when conducting EO tests.

Table 2. Baseline Characteristics of Participants According to Groups (Mean ± SD)

The IBM SPSS Ver. 21.0 for Windows was used for statistical analysis. All data were presented as means ± standard deviations. The MATLAB application (Stable release: R2019a; Mathworks, USA) was used to filter data by Butterworth Filter (a fourth-order low pass filter) with a cutoff frequency of 7 Hz (22, 23). The normality of data distribution was confirmed with the Kolmogorov-Smirnov test. To compare the impact of interventions at any eye state, we used a two-way mixed factorial ANOVA [group × time; between-subject = group (NPT and Control groups); within-subject = time (before and after the study)]. Moreover, a paired t-test with Bonferroni correction was performed to compare the pre and post-study values for each measurement of CoP swing. Bonferroni adjustments were calculated by dividing 0.05 by the number of analyses conducted. The statistical significance level was adjusted to ≤ 0.008 using the Bonferroni method (Bonferroni adjustment = 0.05/6 = 0.0083). Partial eta squared (ηp2) effect sizes (24) were small, medium, and large based on the calculated values of 0.01, 0.06, and 0.14, respectively (25). Statistical significance was considered at P < 0.05 with a confidence interval of 95%.

As shown in Table 2, at the beginning of the study, there was no significant difference in the examined variables between the groups (P > 0.05).

Of 10 participants who left the study, two were due to health reasons, three due to loss of interest, four due to lack of time, and one due to unknown reasons. Table 3 shows postural data in both planes with EO and EC.

Table 3. The velocity of Center of Pressure During Postural Stability Tests as Means (± SD) in Different Visual Conditions (Open and Closed Eyes)

It is important to note that an irregular exercise program will not improve traditional markers of physiological performance and fitness in the elderly (26). Therefore, a regular exercise program was considered in this study. The close link between obesity and postural instability has been shown in several studies. However, only have a few studies been conducted on non-obese and postural control among middle-aged women (23). Regardless of the effect of BMI as one of the body composition parameters on postural balance, the objective of this study was to assess the impact of a 12-week NPT program, rather than general warm-up routines, on postural steadiness during quiet standing in active middle-aged women. The differences in participants’ BMIs, as shown in Table 2 (BMIs of 28.1 and 22.7 in the NPT group with a mean of 25.4 ± 2.7), seem to confirm the effects of the NPT and its application on all middle-aged women. It is widely recognized that postural instability is one of the characteristics of aging (27, 28). The reductions observed in this study were incompatible with age-related alterations in CoP. Given the reliability (29) and sensitivity (19) of the mean CoP velocity, the results of the current study confirmed the hypothesis and the positive effect of NPT on postural steadiness.

Some researchers believe that one of the factors contributing to the improvement of postural stability during exercise is the rising body temperature (33). Therefore, the positive effects of exercise cannot continue for a long time. These findings contradict the results of the present study. This study also showed that visual perception as an ambient system can influence the postural steadiness of middle-aged women and confirmed the findings of other researchers who suggested that visual conditions could affect stability and balance (34).

Since we studied merely women, the NPT effects on men are unclear. Therefore, research on men is proposed. Other limitations of this study were that the consequences of NPT cessation after the study remained unknown and the mean CoP velocity was measured by one force platform during an upright stance. As pointed out earlier, BMI characteristics were not evaluated and this could be considered another limitation.

The NPT is linked to significant improvements in static situation and postural stability. A 12-week NPT could reduce mean CoP velocity during the static condition of lateral and anterior-posterior stability in older adults. The study of postural stability caused by aging during quiet stance can lead to improving health, assessment, or rehabilitation of impaired balance to increase the quality of life of older adults.

Copyright © 2019, Middle East Journal of Rehabilitation and Health Studies. This is an open-access article distributed under the terms of the Creative Commons Attribution-NonCommercial 4.0 International License (http://creativecommons.org/licenses/by-nc/4.0/) which permits copy and redistribute the material just in noncommercial usages, provided the original work is properly cited.
download pdf 144.92 KB Get Permission (article level) Import into EndNote Import into BibTex
Number of Comments: 0