How to Cite: Karampour S, Ravasi A A, Choobineh S. The Effect of High-Intensity Interval Training with and Without Caloric Restriction on Spatial Learning and Long-Term Memory of Obese Rats. Middle East J Rehabil Health Stud.6(4):e96740.
doi: 10.5812/mejrh.96740. 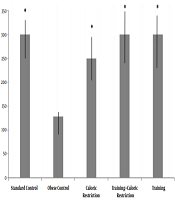 The purpose of this study was to compare the effects of high-intensity interval training (HIIT) with and without caloric restriction (CR) on SL and LTM of obese rats.

Forty male Sprague Dawley rats were subjected to a high-fat diet (HFD) for 12 weeks. After confirmation of obesity, they were divided into four groups of 10 subjects, including (1) training (T), (2) training + caloric restriction (T+CR), (3) CR, and (4) obese control (OC). Also, to assess the effect of obesity on the research variables, 10 rats were considered the standard control (SC) group. For 8 weeks, the rats in groups 1 and 2 performed HIIT three times per week at an intensity of 80% to 95% of Vo2max, and groups 2 and 3 received CR of 60%.

It seems that HIIT, and somewhat the CR, by itself has contributed to the improvement of the cognitive impairment of obesity. Also, the interaction of T and CR was effective in improving these disorders, but its effect was not more intense than each one alone.

Obesity is the greatest public health challenge in the present century, and the health sector in most countries of the world concerns with the problems and complications of the increasing incidence of obesity. By 2020, 1.3 billion people are estimated to be overweight and 573 million obese (1). Obesity is a major health problem and has a direct relationship with psychiatric disorders such as Alzheimer’s, depression, Parkinson’s, MS, and long-term memory (LTM) loss (2). Obesity can bring about the reduced volume of the brain and related diseases by declining neurogenic function, as well as increased neuronal death, oxidative stress and inflammation (3). Studies show that an increase in each unit of BMI, which is a benchmark for obesity, is associated with a decrease of 0.5% to 1.5% in the brain tissue and an increase in the atrophy of the hippocampus (4). Many studies have confirmed the relationship between obesity and reduced brain volume and consequently, mental disorders (3). Attuquayefio et al. observed a reduction in memory and spatial learning (SL) in response to high-fat breakfast (5). Cheke et al. also reported memory loss and hippocampal-dependent SL of the obese people with a BMI of more than 30 compared to lean subjects (with a BMI of 17 - 25) (6). Valladolid-Acebes et al. emphasizing that adolescence is the most important course for learning and acquired memory and can be largely influenced by a high-fat diet (HFD), investigated the effect of 8 weeks of HFD on the hippocampal-dependent SL function of the adolescent male rats. The results showed that the rats that consumed a high-fat diet during adolescence showed lower efficiency in SL performance than other groups (7).

Obesity controllers seem to play a very important role in improving memory performance and hippocampal-dependent SL. Factors such as caloric restriction (CR), as well as sports activity, are considered the most important factors in controlling obesity and their effects on controlling the destructive effects of obesity have been regarded by many researchers (8, 9). Many studies have suggested CR as a factor in weight loss and the improvement of metabolic biomarkers, as well as a factor in preventing age-related diseases (10). Researchers have recently focused on the impact of CR on SL and memory and declared that one of the main reasons for increased learning and memory-induced calorie intake is the proliferation of new neurons in the hippocampus and synaptic plasticity (8, 11). Many studies have shown that decreased daily caloric intake enhances neurotrophins, including nerve growth factor (NGF), brain-derived neurotrophic factor (BDNF), glial cell-derived neurotrophic factor (GDNF), ciliary neurotrophic factor (CNTF), neurotrophin-3 (NT-3) and neurotrophin-4 (NT-4) in the hippocampus, and ultimately improves memory and SL (8).

Regarding the effect of sports activities on memory and SL, it has been shown that aerobic training increases the volume of the hippocampus up to 2%, which effectively compensates for 1% - 2% of annual reduction in the hippocampus volume due to aging (9). It has also been shown that increasing the volume of the hippocampus is associated with an increase in the serum levels of BDNF as a mediator of the proliferation of new neurons in the hippocampal dentate gyrus (9, 12). In another study, the effect of interval aerobic activity and resistance activity on neurogenesis and SL was compared. The results of this study showed increased neurogenesis and SL in response to interval activity compared to resistance activity (13). Also, Park et al. stated that an HFD would reduce the mitochondrial function of neurons and eventually, their death. After 12 weeks of incremental interval training, these researchers witnessed an increase in the hippocampal-dependent memory in obese rats, which has been attributed to improved neurogenesis and reduced neuroapoptosis in the hippocampus (13). Considering the previous studies, sports activities and CR are two important factors in weight loss and memory enhancement.

In this study, the effect of HFD on LTM and SL of obese rats was firstly investigated. Then the effects of high-intensity interval training (HIIT), CR, and their interaction on cognitive variables were examined in obese rats.

The present study is an experimental study. To do the study, 50 eight-week-old male Sprague Dawley rats with an average weight of 190 ± 5 g were purchased. Rats were kept under controlled light conditions (12 hours of light and 12 hours of darkness), temperature (23 ± 1°C) and humidity of 45%. Animal experimental procedures were in accordance with institutional guidelines and approved by the Ethical Committee of Laboratory Animals Care at Marvdasht Islamic Azad University. After initial BMI measurements, 10 rats were placed in the standard control (SC) diet group and the rest in the HFD group. HFD was prepared in the laboratory-based on the guidelines of related papers and opinions of livestock and poultry experts (14). Of the nutritional total calorie, 67.8% comprised fat, 22.5% carbohydrate, and 9.5% protein, and in general, each gram of this food contained 5.25 kilocalories of energy. Rats had free access to water and food within 3 months. Using a digital scale, the weight of rats was measured weekly during HFD. After reaching the given standard of BMI ≥ 310 for obesity (15), rats were divided into four groups: (1) training (T), (2) training + caloric restriction (T + CR), (3) CR, and (4) obese control (OC). The T groups performed HIIT for 8 weeks and 3 sessions per week at 10 am. The intensity of the training was 20 m/min (equivalent to 80% of Vo2max) in the first week, which increased incrementally up to 29 m/min (equivalent to 95% of Vo2max) in the final week (16). The principle of overload was augmented not only by increasing treadmill speed but also by increasing the duration of each training session, as in the first week, the training was performed with only three 2-minute alternations and 1-minute rests, but in the last week, the training ended with a number of ten 2-minute alternations. It should be noted that the intensity of the activity during warming, cooling, and resting between alternations was 8, 8, and 13 m/min, respectively. The groups with a CR only consumed 60% of the food compared to the other groups, and this process, like T, lasted eight weeks at the same time. The OC group did not have any T or CR.

After 8 weeks of T + CR, Y-maze and Shuttle-box behavior tests were performed on all rats to measure SL and LTM, respectively. Y Maze is a test based on the inherent curiosity of rodents to explore new environments and there are no positive or negative stimuli in the maze. Within 8 minutes, the arms where the animal entered were recorded in sequence. In order to evaluate the SL of the animal, the number of non-repetitive triplets (actual alternation) was calculated first and the rest were eliminated and then using the following formula, the SL percentage of the animal was formulated.

To examine the LTM, twenty-four hours after the training session, the animal was placed in the clear compartment and after a few seconds the guillotine door was opened and the animal was allowed to enter the insecure compartment; the time it takes for the animal to enter the dark compartment was recorded and the test was terminated. The latency of the entrance to the dark compartment after 24 hours is a criterion for an animal’s LTM (17). Data were analyzed using SPSS software (version 19). The Kolmogorov-Smirnov test was used to evaluate the normality of the data, and one-way ANOVA and Tukey’s post hoc tests were used for data analysis (P ≤ 0.05). Earlier studies have shown that the prevalence of brain disorders such as learning and memory loss, Alzheimer’s, depression, etc. is increasing due to obesity. The hippocampus is also, a part of the brain that is directly related to learning and memory, and its volume reduction can cause these disorders. Obesity reduces the size and weight of the hippocampus by reducing the generation and proliferation of neurons (neurogenesis), reducing the expression of neurotrophins, and increasing the early death of neurons (neuro apoptotic). One of the main causes of reduced neurogenesis due to obesity is related to the increase in the plasma of leptin hormone. Because the hippocampal leptin signal is damaged due to the decrease in the transmission of leptin from the blood-brain barrier and increased resistance in leptin receptors at the level of the hippocampal neurons (18). Increasing the resistance of the hippocampal leptin receptors, which is expressed by decreasing expression of signal transducer and activator of transcription 3 (STAT3), reduces the growth of axons and synapses, and increases neuroapoptosis through glycogen synthase kinase 3β (GSK3β) and P53 (19).

Sport exercises, like the CR, reduce overweight, obesity, and related disorders by activating countless signaling pathways. In a study, Shi et al. stated that interval training by regulating sirtuin-3 (SIRT3) could reduce the cognitive dysfunction associated with HFD (20). Physical activity is also recognized as an effective method for improving the cognitive function of all age groups, especially the elderly who are more susceptible to neurological disorders since the release of mycoses by the operating muscles leads to the upregulation of neurotrophin expression in the hippocampal dentate gyrus (12). Besides, Erickson et al. argued that sport exercise increases the size of the hippocampus by 2%, which effectively compensates for 1% to 2% of the annual reduction in the hippocampus due to aging, which is because of increased serum levels of BDNF as a mediator of neurogenesis in the dentate gyrus (9). In another study, Nokia et al. compared the effect of two types of resistance and aerobic training on the neurogenesis process. The results indicated increased proliferation, maturation, and survival of the hippocampal neurons in the aerobic group compared to the resistance group (21). On the other hand, physical activity improves memory by promoting mitochondrial functions of the hippocampus and inhibition of apoptosis (13).

There are some limitations to this study, such as the lack of controlling the effect of other disorders caused by HFD on LTM and SL, stress in rats during Y-maze and Shuttle-box tests.

Therefore, it is suggested that future studies investigate the effect of complications of obesity such as type 2 diabetes, sleep apnea and digestive problems on LTM and SL.

Based on the findings of the current study, HIIT has significantly increased LTM and SL of the obese rats. Regarding the review of literature on the positive impact of T and CR on reducing the process of obesity and neurological disorders, it was expected that the interactive effect of T and CR would be more intense than each one alone, but it was observed that the interactive effect of T + CR is similar to the effects of each of the variables alone, that can be due to the involvement of unknown signaling pathways, requiring further research in the area to understand it better.

We appreciate all the staff of the National Iranian South Oil Company (NISOC) for funding the current research as a doctoral dissertation.