Score of Perme: Analysis of Clinical Destroys the High or Death the Intensive Care Unit 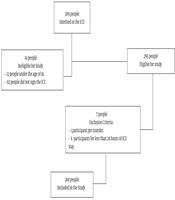 The intensive care unit (ICU) promotes substantial care for patients in critical care, considering the essence of intensive care and applied therapies where the patient remains for long periods restricted to the bed.

To analyze the high or death outcomes of persons hospitalized in the ICU, in relation to age, sex, severity score, hospitalization, comorbidities, length of stay in the ICU and hospital.

Quantitative, cross-sectional and descriptive design. Participants included 288 people hospitalized in the ICU of hospitals. Measurements included the permeal scale, Simplified Acute Physiology Score 3 (SAPS3) and a questionnaire to record data related to gender, age, diagnosis, comorbidities, whether using invasive mechanical ventilation or not, using drugs and sedatives that applied to patients admitted to the ICU within 24 hours of ICU admission and at the time of hospital discharge, from February to July 2018. The clinical endpoints of death or death were evaluated by the Perme scale.

The initial score of the Perme score was lower in the death outcome (0.57 ± 1.98) when compared to the high score (7.27 ± 8.16). There was no significant difference between the outcomes regarding the length of ICU stay, and the length of hospital stay was significantly higher in the high group.

The intensive care unit (ICU) promotes substantial care for patients in critical care, considering the essence of intensive care and applied therapies where the patient remains for long periods restricted to the bed. In this way the mobilization of these people becomes hermetic, inciting and requires additional resources, including equipment and skilled labor (1).

Several systems can be compromised due to immobility of the critical patient, such as circulatory, gastrointestinal, musculoskeletal, respiratory, tegmental and urinary, providing limitations with consequent loss of innervation and decline in muscle mass (2-4).

The skeletal muscle system is the most affected by immobility, functional limitations can impair transfers, postures, movement in the bed, alterations in walking and difficulty in performing activities of daily living (5). These functional alterations can be due to the complications inherent to the length of stay in the ICU, from immobility and bed rest, disease severity, prolonged sedation, hyperglycemia and use of certain drugs such as corticosteroids, neuromuscular blockers and central nervous system depressants (6, 7).

It is fundamental to perform the diagnosis of the functional status prior to ICU admission, as this will assist in directing the physiotherapeutic plane (8). Another aspect that should be considered in the assessment of the ICU’s functionality, which for many years has occurred through nonspecific scales for this environment (9, 10).

Considering these aspects, the current literature has been increasingly devoted to studying the “functional status” of patients admitted to the ICU due to their impact on prognosis after ICU and hospital discharge (10). Therefore, Perme et al. (11) developed a specific score to measure the improvement of the mobility condition, to standardize the evaluation of the patients hospitalized in the ICU. The Perme score is a scale that measures, objectively, the mobility condition of the hospitalized patient in the ICU, starting with the ability to respond to commands and culminating with the walking distance in two minutes. In the Perme score, a high score indicates high mobility and less need for assistance. Conversely, a low score indicates low mobility and a greater need for assistance (12).

Given the complexity of every technological apparatus that ICU patients are involved in, and the entire limitation of mobility, measuring the individual’s functional capacity through a specific ICU scale is essential since it seeks to preserve their independence by bringing benefits which influence the quality of life after discharge (11).

Thus, this article aims to analyze the high or death outcomes, based on the Perme score, in relation to age, sex, severity score, hospitalization, comorbidities, length of stay in the ICU and hospital, of persons hospitalized in the ICU.

This is a quantitative study, with a descriptive, cross-sectional design, carried out in an adult ICU of the north-central coast of the state of Santa Catarina, from February to July 2018. This unit in question serves users of the unified health system and has 10 beds of hospitalization profile of clinical and surgical patients.

The health team consists of a social worker (1), nurses (5), nursing technicians (20), physiotherapists (4), phonoaudiologist (1), physicians (10), nutritionists (1), psychologists and calls for consulting from a wide range of areas of expertise to provide qualified, individualized and ongoing patient care.

The study population was made up of people hospitalized in the adult ICU from February to July 2018. We included in this study people who were admitted to the adult ICU at the time of data collection that was aged ≥ 18 years of both sexes, who accepted to participate in the study signing the informed consent form, and those who were transferred to other ICUs, and people who were hospitalized for less than 24 hours in the ICU were excluded.

For the data collection, a dataset elaborated by the authors was used, which contained relevant information for this study, in order to facilitate the organization of the data.

After the formalization of the research participants, the collection was started, where the evaluation of the participant hospitalized at the ICU occurred within 24 hours of hospitalization.

At this time the data regarding the gender, age, diagnosis, comorbidities, Simplified Acute Physiology Score 3 (SAPS3) (calculated by the s invasive mechanical ventilation (MV) were being used or they were using vasoactive drugs and sedatives. At that time, Perme’s score was also applied, which has a score varying from 0 to 32 and reflects the mobility status of the patient at a given point in time. This score is derived from 15 items grouped into categories: mental state, powers of mobility barriers, functional strength, mobility in the bed, transfers, March and resistance (11). The Perme’s score translation into Portuguese and cross-cultural adaptation for use in Brazil shows the inter-rater agreement (kappa statistics and 95% CI) and reliability (internal consistency, Cronbach’s alpha coefficient) for the IMS and for each domain of the Perme score. The IMS showed excellent inter-rater agreement and reliability. In addition, the inter-rater agreement for each item of the Perme score ranged from 78% to 100%, and the inter-rater reliability (Cronbach’s alpha coefficient) ranged from 88% to 100%, meaning that there was excellent inter-rater agreement and reliability for all items (12).

The participant was followed until the high outcome which was death or hospital transfer. The data were tabulated in the Excel® Program 2010 and later exported for analysis in the statistical program Statistical Package for Social Sciences (SPSS®)-version 20.0 for Windows. The descriptive statistical treatment was performed using simple frequency, percentages, mean and standard deviation. The statistical analysis of the data was performed: Kruskal-Wallis non-parametric test, chi-square test, and Spearman correlation. The non-parametric Mann-Whitney test was also used. This study was approved by the Ethics Committee on Researches with Human Beings, under no. 2,229,726. The legal participants signed the informed consent form.

The total population consisted of 309 people admitted to the adult ICU from February to July 2018. However, 295 were eligible for the study, and 6 participants were excluded because they stayed less than 24 hours in the ICU and 1 participant was excluded by transfer. Thus, the sample of this study counted on 288 people (Figure 1). aValues expressed as No. (%), except where indicated, or mean ± SD or median [interquartile range].

Of the total hospitalized patients, 73.3% were clinical, 34% were neurological, followed by 26.7% respiratory complications, 15% cardiac causes, 8.7% renal dysfunction, and 1% due to hepatic complications. The most prevalent surgical circumstance was 13.5% due to gastroenterological postoperative complications. Other complementary reasons did not arrive at expressive data that merited citation.

Table 2 shows the data regarding the association of high/death outcomes. When comparing age and sex between the groups there was no significant difference. The score of the SAPS3 score in the death outcome was higher when compared to the high outcome, as well as the use of vasoactive drug (DVA), and sedation. The initial score of the Perme score was lower in the death outcome when compared to the high score. There was no significant difference between the outcomes regarding the length of ICU stay, and the length of hospital stay was significantly higher in the high group.

aValues expressed as No. (%), except where indicated, or mean ± SD.

The primary results found in this study demonstrate that higher scores on the SAPS score 3, low scores on the Perme score, use of DVA and sedation were associated with the ICU death outcome.

Management emphasizes progression toward the levels of functional performance required to expedite hospital discharge, which can be enhanced by coordinated multidisciplinary therapy (21) and for the performance of motor physical therapy. After hospital discharge, physical rehabilitation has been characterized by the provision of rehabilitation programs for home or hospital exercises, including combined strength, cardiovascular and functional components (22).

Despite knowledge of the deleterious effects of bed rest in multiple body systems (23-26) the ICU turns out to be a complicated and difficult environment to mobilize critically ill patients. There are several catheters and monitors to support life, use of sedation to reduce energy expenditure, sleep disorders, electrolyte imbalance, and mild hemodynamic state, which are factors that limit mobilization, thus contributing to the patient’s staying a rest period (27-29).

Several studies have demonstrated the benefits of early mobilization of ICU patients, among them the improvement of functional status and acceleration of the process of return to pre-morbidity activities (32).

The mobilization within the ICU described in recent studies has been shown to be safe when performed in a standardized and systematic way. For it to occur effectively, all staff involved in care must participate and understand its importance (28, 32).

Some limitations of this study should be used. First, a daily assessment of participants using the Perme score, or that could allow a better view of the progress of these people’s functionalities in ICU. As well as the application score at hospital discharge.

However, the main aims to analyze the high or death outcomes, based on the Perme score, in relation to age, sex, severity score, hospitalization, comorbidities, length of stay in the ICU and hospital, of persons hospitalized in the ICU, was hit.

It should be noted that this is a municipal hospital, however, due to the scarcity of medium complexity care units in the neighboring municipalities, the hospital in which this study was conducted ends up receiving innumerable patients, from the most varied cases with a high degree of complexity. This aspect ends up inferring in the severity of the patients received there, since it is a heterogeneous sample, with a score in the SAPS3 High Score, resulting directly in a high mortality rate.

Acknowledgements to patients and the hospital.