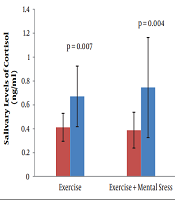 Physiological stress due to physical activity associated with mental stress can affect the responses of the sympathoadrenal axis and the hypothalamic-pituitary axis.

The present study aimed to investigate the effect of exercise with mental stress on cortisol and alpha-amylase changes in young men.

It seems that exercise and exercise with mental stress have the same effects on increasing salivary cortisol and alpha-amylase levels.

Many professionals, such as firefighters, police officers, and even recreational athletes, are subject to physiological stress from physical activity coupled with mental stress from occupational status and exercise. It is suggested that mental stress is likely to exacerbate the pathogenesis of the cardiovascular disease. Increased morbidity and mortality rates in some aforementioned professionals, such as firefighters, police officers, and athletes, may partly reflect the negative effects of the combination of mental stress and physical activity on the cardiovascular health of these individuals (1).

An essential mechanism in the human body is the activation of the sympathoadrenal axis (SAA) and the hypothalamic-pituitary axis (HPA) to maintain physiological stability and empower the individual against stress signals (2, 3). Research on the HPA and SAA activity in response to human physiological stress is on the rise and it is generally expected that there is a symmetry between the structure of the HPA and SAA (4). When a person is exposed to psychological stress and exercise-induced stress, a chain of reactions occurs involving the responses of the SAA and HPA (5). The HPA is activated to regulate the active, metabolic, and immune processes in response to the body stress. This stress-activated pathway increases the ACTH release from the pituitary (6).

The activity of both SAA and HAP reflects changes in salivary protein concentrations, such as cortisol and alpha-amylase, which have been studied in several studies during exercise competitions (9). Some studies have shown that salivary alpha-amylase levels after exercise decreased (10), increased (4), and even remained unchanged (11). For example, the results of a study by Khazimeh et al. indicated that salivary cortisol and alpha-amylase levels increased as a result of endurance training while salivary acidity decreased (12). Deneen et al. observed that in the long-term, cortisol and alpha-amylase productions were suppressed in athletes (4). Moreira et al. also showed that cortisol levels increased after professional basketball competition (13). According to the above sentences, psychological and physiological stresses can result in SAA and HPA responses. Therefore, as mental stress can affect cardiovascular health, in the present study, we tried to investigate the effects of mental stress during exercise (which is a very effective factor in stimulating the HPA) on the alpha-amylase enzyme (an indicator of SAA activation) and cortisol (an indicator of HPA activation).

Considering the inconsistency among previous findings concerning the effects of mental stress, the present study aimed to investigate the effect of exercise training combined with mental stress on changes in cortisol and alpha-amylase in young men.

In this quasi-experimental study, 20 inactive male students from Azad University of Science Research Branch were selected as the statistical sample. After measuring stress (using state anxiety inventory (SAI)) and aerobic power, the participants were assigned into two equal groups of 10 subjects including exercise (E) and exercise with mental stress (EMS). It is worth noting that since all subjects had to perform the aerobic power test, the subjects would be selected from among those who had no hearing and visual impairment, no history of mental disorders, and having the ability to pedal on a stationary bike for 37 minutes.

In the present study, the inclusion criteria comprised the lack of regular exercise in the past six months, lack of hearing and vision problems such as color blindness, history of mental disorders, and use of drugs and tobacco. The exclusion criteria were having untoward experience in everyday life in the past six months, such as a divorce or the death of kin or relative.

All subjects were advised to refrain from any physical activity, especially heavy and high-intensity physical activity, 48 hours before exercise training protocol. Initially, all subjects completed the health questionnaire and were familiarized with the test and then in a predetermined session, the subjects’ aerobic power was measured using the Metamax 3B gas analyzer manufactured by German Cortex Company (at Physical Education Faculty of Shahid Beheshti University, Tehran, Iran). To measure the aerobic power, all subjects warmed up for 3 minutes on a Monarch bike at 25 watts. Then, they started the test at 100 watts and 50 watts were added every 90 seconds until the subjects reached the maximum heart rate, the respiratory exchange ratio of higher than 1.1, and the perception of pressure over 15; in this condition, the test ended and the maximum oxygen consumption (VO2max) was determined.

After one week, on the examination day, subjects in group E pedaled on a Monarch fixed bike for 60 minutes at 60% of VO2max. Group EMS pedaled on a Monarch fixed bike for 60 minutes at 60% of VO2max and received mental stress at the same time (14). Then, exercise and mental stress were acutely applied for one session. In the present study, mental stress consisted of a modified version of the Stroop test and mental arithmetic test applied from the 12th minutes to 32nd minutes while pedaling for 5 four-minutes turns, each consisting of two minutes of color Stroop stress and two minutes of mental arithmetic challenge. In the Stroop test, the color of the word was shown audio-visually to subjects in contrasting fonts for half a second, and the subject had a half-second time to click the response on the screen. Subjects were constantly given on-screen feedback on the accuracy of their actions. When subjects responded incorrectly, they were alerted by a computer. In the mental arithmetic test, subjects were exposed to dealing with three-digit mathematical operations and were alerted by a computer when they answered incorrectly. The next mental challenge was introduced by providing feedback during the test (you are slow, others did better) (14).

The subjects’ salivary samples were collected before the start of pedaling and immediately after the termination of pedaling. Australian saliva sampling tubes, including a centrifuging tube and a cotton roll, were used to collect saliva. Participants held a cotton roll in their mouths and were asked to put the cotton roll under their tongue for the first 30 to 45 seconds and then rotate it in the oral cavity, without chewing or keeping it between their teeth. After collection, the samples were placed in a centrifuge device.

The Shapiro-Wilk test was used to investigate the normality of data distribution. Paired-sample t-test and independent samples t-test were used to review within-group and between-group differences, respectively, in cortisol and alpha-amylase (P ≤ 0.05).

The study was approved by the Ethics Committee of Central Tehran Branch of Islamic Azad University with ethical code IR.IAU.SRB.REC.1396.70.

Table 2. The Results of Independent Sample t Test to Review the Changes in Salivary Levels of Cortisol and Alpha-Amylase Between Groups E and EMSa Figure 1. Salivary levels of cortisol in the study groups, Mean and SD. Figure 2. Salivary levels of alpha-amylase in the study groups, Mean and SD.

The results of the independent samples t test showed that there were no significant differences in salivary cortisol levels (P = 0.70) between groups E and EMS at pretest; nevertheless, salivary alpha-amylase levels were significantly higher in group EMS than in group E (P = 0.01).

The results of the independent samples t test showed that there was no significant difference in the pretest and posttest changes in the levels of cortisol (P = 0.42) and alpha-amylase (P = 0.83) between groups E and EMS (Table 2).

Studies also show that the activity of the SAA system results in the increased secretion of alpha-amylase by salivary glands (17-20). The alpha-amylase assay in the saliva is a noninvasive method of measuring SAA axis activity (21). SAA and HPA axis activity generally influences cardiovascular and metabolic functions in response to different stressors (22). In the present study, the results showed no significant difference in cortisol changes between exercise training and exercise training with mental stress groups as an indicator of HPA axis activity although there was an increase in the parameters of both groups in the posttest compared to the pretest. Acute stress has shown contradictory effects on cortisol secretion. Consistent with the findings of the present study, most studies have shown an increase in cortisol. For example, in the study by Hitrob, the effect of simultaneous challenge was associated with an increase in stress hormones (cortisol) (22). Also, the results of a study by Marioyama showed no difference in salivary alpha-amylase response following Trier Social Stress Test exposure through electrical stimulation, but cortisol response was more in females than in males (23). However, in some studies, no change or decrease in cortisol has been observed. In this vein, one study meta-analyzed the results of 208 studies and showed that stressors acted differently in terms of cortisol increase and HPA axis activation. Increased cortisol levels are related to uncontrollable stressors and/or mainly related to threats and social distress (24). In addition, inconsistencies in cortisol secretion may be due to personality differences or environmental and genetic variables (25).

Previous research has shown that the intensity of 80% of maximal oxygen consumption (VO2max) (26) or average intensity of 70% of VO2max for more than 60 minutes induced an HPA response and cortisol increase. Also, in a study, it was shown that one session of exercise training at 40 to 60% of the maximal oxygen consumption resulted in no change or decrease in cortisol (26).

The interpretation of the results of the present study is accompanied by some limitations; for example, pedaling at 60% of the maximum oxygen consumption at the laboratory (in vitro) may not be appropriate to simulate natural exposure to physical stress (in vivo); also, mental stress may be perceived differently by each individual and the HPA axis may not be specifically sensitive to the mathematical question and color test applied in this study as mental challenges (27) but other social stressors may be more effective on the HPA axis (24). Salivary alpha-amylase from parathyroid glands acts in response to adrenergic activity and β-adrenoceptor suppression (28) and it has been suggested as an important indicator of mental stress (29). In the present study, the results showed no significant difference in alpha-amylase changes between exercise training and stress training with mental stress groups although there were increases in both groups in the posttest compared to the pretest. The lack of access to subjects with the same stress level, small sample, and inability to measure research variables by ELISA and Western blotting methods were among the limitations of this research. Nevertheless, the use of accurate and precise instruments and controlling all confounding factors of research were the strong points of the present study.

The present study is part of a doctoral dissertation approved by the Science and Research Branch of Islamic Azad University, the authors of this article express their gratitude and appreciation for the spiritual support of the Research and Technology Department of this university branch.