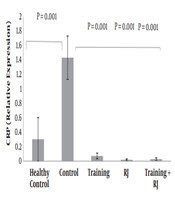 Studies have shown that Alzheimer’s disease (AD) causes neuromuscular dysfunction by damaging different parts of the central nervous system and inflammation that can increase C-reactive protein (CRP) levels. Nevertheless, the beneficial effects of endurance training (ET) and royal jelly (RJ) on inflammation and reduction of CRP are not fully elucidated.

The aim of this research was to investigate the effect of ET with RJ on gene expression of CRP in muscle tissues of rats with AD.

In this experimental study, 24 rats with AD (8 mg/kg trimethyltin injection) were randomly divided into four groups of 1-ET, 2-ET + [RJ (100 mg/kg)], 3-RJ and 4-control. Also, six healthy rats were placed in the healthy control group to investigate the effects of AD induction on CRP gene expression. Endurance training groups performed endurance training with a speed of 15 - 20 m/min, 5 sessions per week for eight weeks.

It appears that ET and RJ have interactive effects on the reduction of CRP in muscle tissues of rats with AD.

One of the most important events that occur with age is impaired formation, retention and recall of memory function as well as cognitive function. Statistics show that one-third of adults experience a gradual decline in cognitive functioning such as Alzheimer’s disease (AD) and depression as age-related disorders (1).

Studies indicate that inflammation in the central nervous system can have a major role in the formation of AD (2). Chronic low-grade inflammation is accompanied by higher than normal levels of several cytokines, including C-reactive protein (CRP), interleukin-6 (IL-6) and tumor necrosis factor-α (TNF-α) (3). Mild chronic inflammation is an important factor in the pathophysiology of several chronic diseases, especially AD (4). When AD’s causing factors such as accumulated beta-amyloid and Tau proteins are hyperphosphorylated, they stimulate glial cells and astrocytes, which in turn stimulate the production IL-6, IL-1, CRP, and TNF-α. On the other hand, pro-inflammatory factors and cytokines make beta-amyloid and Tau proteins hyperphosphorylated, as well as destroy neurons, thereby resulting in cognitive impairment (2). C-reactive protein is a non-specialized marker of inflammation (5). Serum levels of CRP in healthy individuals are low but increase up to 100-fold when inflammation or an acute illness occurs (6).

Regular aerobic exercise with low to moderate intensity improves the physiological function of skeletal and cardiac muscles, as well as decreases the incidence of a wide range of diseases, including cardiovascular disease, some cancers, AD, and so on. Over the past decade, regular exercise has been shown to have beneficial effects on brain function. So, regular exercise can improve perception and cognition by improving learning and memory, preventing neurological disorders such as anxiety, depression, AD and Parkinson’s disease, also delaying memory loss due to aging (7).

Proper nutrition, in addition to its effect on physical function, has a tremendous impact on mental and brain function as well as memory; thus nutritional deficiencies can cause or aggravate mental and emotional illnesses. Royal jelly (RJ) has been shown to have different biological activities in different cell types and tissues of animal models (8-11). The RJ is mainly made up of proteins, sugars, fats (including sterols and fatty acids) and trace amounts of mineral salts and vitamins (8). Researchers report that RJ may differentiate brain cell types, including neurons from neural precursor cells (NS/NPCs). The effects of RJ on inflammation have also been reported in various researches (9-11).

The fact that combination therapy can stimulate the brain and counteract the neurological disorders by using a healthy diet and exercise has been shown in various studies. Nevertheless, few types of research have examined the anti-inflammatory effects of RJ and exercise in patients with AD. Therefore, the aim of this research was to investigate the effect of ET with RJ on gene expression of CRP in muscle tissues of rats with AD.

During the research period, standard food plates and water were provided freely. All rats were kept in the standard situation (temperature of 23 ± 2°C, the light/dark cycle of 12:12, and the humidity of 45% to 55%). In the present study, inclusion criteria consisted of weight between 200 - 250 g and male rats, while exclusion criteria were low weight (less than 200 g) and overweight (more than 250 g).

On day eight, 8 mg/kg of trimethyltin chloride (TMT) was injected intraperitoneally to 24 rats (12) and after 24 hours of ensuring its full effect on the hippocampus, rats with AD were randomly divided into 4 groups of 1-ET, 2-ET + (RJ (100 mg/kg), 3-RJ and 4-control. Also, to review the effect of AD induction on CRP, resting 6 rats were selected as the healthy controls. During eight weeks, ET groups performed endurance training with a speed of 15 - 20 m/min, 5 sessions per week for eight weeks (13) and RJ groups received daily 100 mg/kg RJ (14) peritoneally.

Forty-eight hours after the last training session, all rats anesthetized with ketamine (30 - 50 mg/kg) and xylazine (3 - 5 mg/kg). Then, soleus tissue was extracted by experts and after putting in cryotube was placed in liquid nitrogen and stored at -70°C for further studies. After transferring tissues to the laboratory, CRP gene expression was measured using real-time PCR. The sequences of primers are shown in Table 1. It should be noted that beta-2 microglobulin (β2M) was selected as the housekeeping gene. To review the normal distribution of data and effect of AD induction on CRP the Shapiro-Wilk test and sample t-test were used respectively as well as two-way ANOVA test was used for investigating the effects of training and RJ on CRP in SPSS 20 software (P ≤ 0.05).

Table 1. The Primer Sequences of CRP In this study, the induction of AD by TMT toxin significantly increased the CRP gene expression level in muscle tissues of rats. The AD causes cognitive impairment, disruption, and destruction of synaptic space and various parts of the central and peripheral nerves (15). Also, TMT neurotoxin has detrimental effects on various parts of the central nervous system, such as the limbic system, the hippocampal cortex formation (16-18). Other components vulnerable to TMT are cerebellar cells as a place of control for motor balance, and this neurotoxin appears to be mediated by oxidative stress mechanisms mediated by non-NMDA receptors and another activation of glutamate receptors. The NMDA glutamate receptor response enhances the oxidative effect and enhances inflammatory cytokines in tissues such as muscle, resulting in muscle breakdown, loss of balance, muscle relaxation, and muscle convulsions (18, 19). Although no studies have independently investigated the effect of this neurotoxin on inflammation in muscle tissue, 8 mg/kg of TMT reduced granular cell density in V cerebellar follicle of rats (20).

The results showed that ET significantly reduced CRP gene expression levels in muscle tissue of rats with AD. Many studies have investigated the effect of exercises on inflammatory factors. In line with the present study, the researchers found that 8 weeks, 5 sessions per week of ET significantly reduced hs-CRP, creatine kinase and malondialdehyde in cardiac muscle of rats poisoned with lead acetate (21) and decreased IL-1β, IL-6, and TNF-α in skeletal muscle tissues of healthy rats (22). Four weeks of swimming training for 20 minutes daily significantly reduced IL-1β and TNF-α in the liver and kidney of middle-aged rats (23). Also, in a study aimed at assessing the type of exercise on CRP levels in patients with diabetes, the researchers showed that 10 weeks of resistance training had no significant effect on CRP changes but ET significantly decreased the CRP levels, but the combination of ET and resistance training rather than ET had more effect on CRP reduction (24).

According to previous studies, the type, intensity, and duration of exercise training may have different effects on CRP levels. However, exercise seems to improve cytokines in muscle tissue by improving metabolism, reducing free radicals, increasing nitric oxide, protein synthesis, production and release of myokines (23-25).

In the present study, RJ consumption significantly reduced CRP gene expression in the muscle tissues of rats with AD. There are few studies on the effect of RJ on inflammatory markers of muscle. However, studies have shown that eight weeks of 100 mg/kg RJ significantly improved lipid profile and reduced IL-6 in patients with type 2 diabetes mellitus (11, 26); RJ consumption significantly reduced CRP and MDA as well as significantly increased GPx (27); eight weeks of RJ significantly reduced CRP serum levels in overweight elderly (28). The anti-inflammatory effect of RJ appears to be dependent on its major component, 10-hydroxytransferon-2-decanoic acid (10-HDA), which modulates IL-6 and CRP receptors by modulating NF-κB and MAPK and free radicals (29). Further, RJ can mimic the effects of brain-derived neurotrophic factor (BDNF) and directly play a role in the regeneration of nerve cells in the adult brain and facilitate the repair and facilitation of neuromuscular connectivity. Neuronal signal transduction (30) activates muscular hypertrophy and inhibits atherogenin-1 and myostatin through the increase in proteins such as insulin-like growth factor-1/protein kinase A (31).

In the present study, the interaction of ET and RJ on the reduction of CRP gene expression in muscle tissues of rats with AD was significant. Evidence suggests that moderate- and low-intensity ET, with the mechanism of free radical reduction, increased nitric oxide, protein synthesis, production and release of myokines (21-25) and RJ with effects of lipid profile improvement, antioxidant effects, oxidative stress-reducing and NF-κB depletion (11, 26-29) can have synergistic effects in reducing CRP expression. No study was found to investigate the anti-inflammatory effects of ET and RJ on muscle tissue, but six weeks of ET and 1000 mg RJ had synergistic effects on hepatic enzyme reduction in patients with multiple sclerosis disease (32); 100 mg/kg RJ and ET had synergistic effects on the improvement of cardiovascular indices in rats with hypertension (33). It appears that ET simultaneously with consumption of RJ can accelerate the effects ET but it seems that the signaling pathway of ET and RJ can be different (in some situation) and they act with separate mechanisms.

Owing to the lack of sufficient information about the interaction of ET and RJ on inflammatory factors, it seems that the results of this study are not comparable with other studies. In addition, owing to the effects of AD on central and peripheral nervous system inflammation, lack of CRP measurement in brain tissue and evaluation of motor neuron function are limitations of this research. Further studies are suggested to measure inflammatory factors in muscle tissues, thereby elucidating neural pathways that are affected in AD.