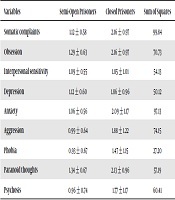 Given the high prevalence of the symptoms of mental disorders among prisoners, it was assumed that the semi-open prison system could be an appropriate way to decrease many damages caused by the prison environment.

This study aimed to compare the symptoms of mental disorders between two groups of prisoners in semi-open and closed prison systems in the central prison of Zahedan.

The current study was conducted from January to March 2015 in the Central Prison of Zahedan located in Southeastern Iran. This descriptive study used an ex post facto design, and the statistical method was Multivariate Analysis of Variance (MANOVA). The sample of the present study included 598 prisoners selected by applying the simple random sampling method (sortation). In this study, the symptom checklist (SCL-90) was used to collect the data. The obtained data were analyzed via SPSS23.

A total of 253 prisoners with semi-open prison sentences (29 ± 5-years-old) and 345 prisoners with closed prison sentences (31 ± 4-years-old) participated in this study. The results of MANOVA indicated that closed prisoners had higher mean scores on all symptoms of mental disorders (somatic complaints, obsession, interpersonal sensitivity, depression, anxiety, aggression, phobia, paranoid thoughts, and psychosis) than semi-open prisoners, indicating the prevalence of the symptoms of mental disorders among closed prisoners (F = 21.25, Wilks’ Lambda = 0.70, P < 0.001).

According to the results, there was a significant difference in the symptoms of mental disorders between the two groups of prisoners in semi-open and closed prison systems.

For many years, the prison act has contained two significant provisions regarding prisoner rights: rehabilitation and normalization that retain their human dignity. Together, these two requirements have contributed to the development of two types of prisons: semi-open and closed prisons. Living conditions in the semi-open system inside prisons should resemble conditions outside prisons as much as possible, and in this way, prisoners in this system are more ready and their mental problems are less than those of prisoners in closed systems (11).

The semi-open prison system allows prisoners, who have judicial verdicts, to leave the prison to work outside the prison and return to it at night. In contrast, prisoners in the closed prison system not only do not have the privileges of the open and semi-open prison systems but also are not allowed to go out of the prison to work or visit their families. These systems have been applied in various countries to deal with the problems caused by the prison environment. As an example, in the 1960s, England and Wales that have a long history in dealing with security and control issues in their prisons established prisons with the least security measures using a category including three types of prisons, i.e. open, semi-open, and closed systems (12).

The other example of open and semi-open prisons is a prison in the city of Salvador in Brazil, which has 2,343 closed prisoners and 354 semi-open prisoners whose open and semi-open sentences were determined based on the crimes they committed, their records, the number of sentences they spent, and their behaviors during the period of imprisonment (13). Prisons in Brazil are extremely crowd and this country has the third-largest prison population in the world (14). The result of research in Germany has shown that open prisons help prisoners to find better meaning in their imprisonment, and it has a lot of advantages for their mental health (11). In this regard, according to the prisons regulation, since prisons are classified into open, semi-open, and closed prisons, it was assumed that implementing the open and semi-open systems, which give a second chance to prisoners and aid them to have jobs, through monitoring the implementation of the related laws and court verdicts could aid prisoners to have good mental status.

This study aimed to compare the symptoms of mental disorders between two groups of prisoners in the semi-open and closed prison systems in the Central Prison of Zahedan.

The current study was conducted in the Central Prison of Zahedan located in Southeastern Iran. This was a cross-sectional study and its statistical population included all semi-open prisoners (n = 745) and all closed prisoners (n = 3,460). To control the confounding variables, a matching method was applied. In this regard, sampling was conducted in a way that initially, two groups of prisoners in the semi-open and closed prison systems were matched based on their nationality (Iranian), gender (all male), marital status (married), home address (local), type of crime (drugs), level of education (diploma), and age (30 ± 2 years). Afterward, among those who had the inclusion criteria, 253 semi-open prisoners and 345 closed prisoners were selected using the random sampling method (sortation) and the questionnaires were distributed to them. Finally, 598 questionnaires were collected. Moreover, for determining the sample size, Cochran’s formula was used. The obtained data were analyzed by SPSS23. The present research was approved by the Research Committee of the Central Prison in Sistan and Baluchestan Province under code 43/111/10/330.

To collect the required data, the symptom checklist-90 was used.

The primary form of symptom checklist-90 was developed by Derogatis et al. (15) for demonstrating the psychological aspects of mental and physical patients and its final scale was improved by Derogatis et al. (16). This form consists of 90 five-point items (extreme = 4, high = 3, some = 2, little = 1, and no = 0) that diagnose nine dimensions, as follows: (1) Somatic complaints (SOM, 12 items); (2) obsession (OBS, 10 items); (3) interpersonal sensitivity (SENS, nine items); (4) depression (DEP, 13 items); (5) anxiety (ANX, 10 items); (6) aggression (AGG, six items); (7) phobia (PHOB, seven items); (8) paranoid ideation (PAR, six items); and (9) psychosis (PSYC, 10 items) (16). Using the alpha coefficient and the Kuder-Richardson formula 20, Derogatis et al. conducted a study on 219 volunteers in America and calculated the internal consistency of this scale (aiming at assessing its validity). The coefficients of these nine dimensions were all satisfactory. In addition, in a study conducted on 94 homogenous mentally ill patients, the scale was tested within a week from the initial assessment to measure the test-retest reliability evaluating the stability of the scale over time. The results demonstrated that in most cases, the majority of correlation coefficients were high (ranging from 0.78 to 0.90) (16). The reliability of this scale was reported as 0. 90 in Iran (17).

The data analysis was conducted in both descriptive and inferential levels. In the descriptive level, the mean, standard deviation, and percentages were used and in the inferential level, to answer the main research question, the Multivariate Analysis of Variance (MANOVA) was applied. A total of 253 prisoners with semi-open prison sentences whose mean age was 29 ± 5 years and 345 prisoners with closed prison sentences whose mean age was 31 ± 4 years participated in this study (Table 1).

The results of the Kolmogorov-Smirnov test indicated that given the level of significance (P = 0.61), the data gathered from the SCL-90 were normally distributed and the results of the Box’s test showed that the data did not violate the assumption of the homogeneity of variance-covariance matrices (F = 9.504, Box’s M = 439.782, P = 0.11). Moreover, the results of the Levene’s test demonstrated that none of the subscales of the SCL-90 violated the assumption of the homogeneity of variances (P ≥ 0.05).

The results of MANOVA indicated statistically significant differences between the mean scores of these two groups of prisoners with semi-open and closed prison sentences in the central prison of Zahedan on the symptoms of mental disorders (F = 21.258, Wilks’ Lambda = 0.707, P < 0.001) (Table 2).

Two types of prison systems have been used in some countries: maximum security and minimum security prisons, each of which with different aspects. A closed prison is designed to be an extremely secure and controlled environment, used for dangerous inmates and those convicted for long-time imprisonment. The approach is used for making a maximum-security prison. Another one is an open prison with a lack of high-security walls and fences, and prisoners serve their sentences with minimal supervision. In this way, prisoners, instead of spending their time in prison, work outside of the jail and educate. Open prison systems are for offenders who have short sentences (11).

In contrast, having tattoos and using the equipment that had already been used to do tattoos were more common among closed prisoners than among semi-open prisoners (18). Research in Germany 2018 has shown that prisoners in the open prison system are more readily rehabilitated compared to prisoners who are in the closed prison system (11). Providing adequate social support is a way to improve people’s mental health. Due to being imprisoned, prisoners are deprived of social support, particularly the support provided by their families (19). Therefore, providing psychological health services can play an important role in providing treatments for prisoners who suffer from mental health issues and compensating for the support they are deprived of (20).

In this regard, applying efficient human resources that can aid prisoners to establish mutual interactions with the environment out of the prison, their family, and society, taking care of prisoners after being released, forgiving them, granting furlough to the prisoners, employing the prisoners, providing financial and vocational support for them after being released, treating them well, removing the social stigma and the like are among factors that can be used in the rehabilitation and reconstruction of the prisoners’ characters, thoughts, psyches, and attitudes towards their surrounding environment, family, and the like (21). A prison is a place where convicted people whose verdicts have been finalized are held through being introduced by judicial and legal authorities for a fixed period with the aim of punishment, vocational training, rehabilitation, and readjustment (22). More than 10 million people around the world are in prisons (23). The huge number of prisoners and lack of space in the prisons are among factors that create tension with employees, anxiety, stress, and aggression, and reduce the prisoners’ mental health (24). The prevalence of symptoms of mental disorders and stress among prisoners is significantly higher than that in the general population (6). Since the prison environment and the rules governing it are seriously harmful to the mental and psychological health (10), determining the prevalence of prisoners’ symptoms of mental disorders and raising the awareness of their mental health issues can play a key role in holding health care programs for this vulnerable population (25).

Prisoners usually have low self-esteem and suffer from depression, isolation, and feeling of emptiness, all of which are the consequences of the prison environment. According to the results obtained from the current study, it can be concluded that the semi-open system can be used as an appropriate method to decrease a lot of damages caused in the prison. Applying such systems gives a second chance to prisoners, prevents the incidence of many symptoms of mental disorders, and creates an opportunity for prisoners to be employed to earn money. Moreover, since, in the semi-open prison system, the prisoners can communicate with the environment out of the prison and they can partly play a role in their personal lives, their life expectancy increases compared to closed prisoners. This provides the ground for decreasing the symptoms of mental disorders among them. Additionally, the open and semi-open systems decrease the number of prisoners in the wards; therefore, those who are allowed to spend some time out of the prison experience better mental and psychological conditions than those who do not have this opportunity. As a result, the former prisoners are more optimistic and have positive views toward life.

Although it was attempted to control the intervening variables during conducting the present study, various factors including cultural factors and the condition of semi-open prisoners in the Central Prison of Zahedan may affect the results of this study; therefore, it is better to be cautious when generalizing these results to other prisoners. The main limitation of this study was that the process of researching in the prison was deeply complicated, and security guards did not give permission to research in the jail. Thus, the researcher just relied on questionnaires and could not interact with prisoners.