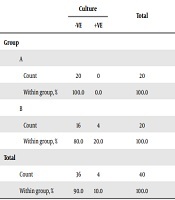 Oral Antibiotic Use Following Stented Hypospadias Repair: Does It Play a Role in the Prevention of Urinary Tract Infections?

There is a lack of consensus regarding the role of oral antibiotics following hypospadias repair.

The study aimed to evaluate the role of oral antibiotic use following stented Tubularized incised plate urethroplasty (TIPU) in the prevention of bacteriuria and urinary tract infections (UTIs).

A prospective study was conducted on 40 patients undergoing stented TIPU for coronal hypospadias between January 2014 and December 2016. The average age of the subjects was 13.2 months at the time of surgery, ranging from 11 to 16 months. The patients were divided into two groups. Group A consisted of 20 patients receiving oral antibiotics until urethral catheter removal, whereas group B consisted of 20 patients without any oral antibiotics postoperatively.

The two groups were followed for three years. The urethral catheter was removed eight days postoperatively in the two groups. In group A, the patients received oral antibiotics as long as the catheter was left in situ. Urine samples were collected from the patients and sent for analysis and culture at the time of stent removal and after three weeks. The results showed that 3/20 (15%) patients from group A had pyuria and bacteriuria, while all of them had negative urine culture results. On the other hand, in group B, 8/20 (40%) patients had pyuria and bacteriuria (P > 0.05), and four (20.0%) patients had positive urine cultures for Escherichia coli (P < 0.05), sensitive to co-trimoxazole. None of the patients in the two groups had febrile UTI.

The use of oral antibiotics for patients following stented TIPU reduces pyuria and significantly decreases positive urine culture results and the risk of UTI after surgery.

A prospective study was conducted after obtaining approval from the Institutional Ethics Committee of the Faculty of Medicine (Mu’tah University, Mu’tah, Jordan) between January 2014 and December 2017. The study included 40 patients undergoing distal hypospadias repair. The inclusion criteria were as follows: (1) a diagnosis of distal hypospadias; (2) age range of 11 - 16 months; and (3) living near the hospital for a better follow-up. Written informed consent was obtained from the parents/guardians of the patients included in the study.

All patients received one intravenous dose of a third-generation cephalosporin (100 mg/kg BW of ceftriaxone) for anesthesia induction. All surgeries were performed by a single surgeon. A two-layer de-epithelialized dartos flap was used as a barrier between the neourethra and skin to reduce the fistula rate (10, 11). For all patients, the urinary diversion was performed using a urethral stent (7 Fr soft feeding tube), fixed to the glans with 5/0 Prolene sutures for eight days. The postoperative dressing was done with a local antibiotic ointment (fusidic acid) using a Tegaderm bandage, followed by a Coban compression dressing. The method of dressing was the same for all patients.

To avoid fecal soiling in the ureteral stent, the stent was kept short and unfolded between the two diapers and fixed with a tape close to the scrotum neck. All patients had an uneventful procedure and hospital stay and were discharged on the day of surgery. Before discharging the patients, their families were provided with instructions on how to handle the urethral stent, clean the genital area, and avoid fecal soiling on the stent and penis.

On the day of surgery, group A started receiving the syrup form of co-trimoxazole as an antibiotic, consisting of sulfamethoxazole (40 mg) and trimethoprim (8 mg/kg BW), in two separate doses every 12 hours to prevent Gram-negative bacilli. On the other hand, patients in group B were discharged from the hospital without any oral antibiotics. On the following day, the Coban compression dressing was removed at home by the parents, and the rest of the dressing was kept until the first visit to the clinic.

In the first follow-up, which was eight days after the surgery and before ureteral stent and Tegaderm removal, the stent was clamped for 30 minutes, and its tip was cleaned with povidone-iodine as an antiseptic to prevent contamination. Next, it was washed with normal saline, and the first 10 cc of the urine sample was discarded. The rest of the urine sample was collected in a sterile container for urinalysis and culture.

The second follow-up was scheduled for all patients three weeks after the stent removal, and urine samples were collected for analysis and culture, using pediatric urine bags. The results were negative for pyuria and bacteriuria, and the urine culture was negative, as well.

In this study, we investigated the benefits of oral antibiotic use after hypospadias repair. The results showed the reductions in pyuria and positive urine culture results, which might, in turn, prevent serious ascending UTIs, especially if the anomaly is accompanied by other pathologies in the urinary tract, such as vesicoureteral reflux (VUR). In this regard, Kim et al. (12) studied the clinical course of VUR in patients with hypospadias. They reported a higher prevalence of VUR in these children than in healthy children.

Tubularized incised plate urethroplasty, which was first described by Snodgrass in 1994 (13, 14), is the most acceptable surgical approach for distal penile hypospadias to reduce known surgical complications, such as fistula formation and meatal stenosis. The use of stents following hypospadias repair is recommended for an average of seven days. This suggestion was supported by Buson et al. (5), who found that stents were advantageous following repair surgeries, with a higher complication rate in stentless cases than in stented cases (18.9% vs. 4.6%); therefore, they recommended the use of stents during hypospadias repair. Overall, most previous studies advocate that patients should receive oral antibiotics to prevent UTI as a major concern after temporary postoperative urinary stent drainage (7, 8).

On the other hand, Smith et al. (15), in a study on 224 patients, reported that the use of preoperative antibiotics did not reduce the rate of infection at the surgical site following hypospadias repair. Moreover, Kanaroglou et al. (9), in a retrospective study at SickKids Hospital (Canada) on newborns without oral antibiotics after hypospadias surgery, reported no increase in the incidence of symptomatic UTIs or complications. The comparison of our results with the study by Kanaroglou et al. (9) indicates that no antibiotic use following hypospadias repair can cause symptomatic infections or adverse consequences.

The main limitation of this study was the small number of patients, leading to low statistical power. We concluded that the use of oral antibiotics following stented TIPU could significantly reduce bacteriuria, pyuria, and positive urine culture results, which might, in turn, prevent upper UTIs.

Although there is a lack of consensus regarding the role of oral antibiotics following hypospadias repair, the present results showed that oral antibiotic use after stented TIPU could reduce pyuria; it also significantly decreased the positive urine culture results and the risk of UTI after surgery.

We extend our gratitude to all personnel who contributed to this study.