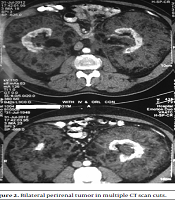 Bilateral huge perirenal Angiomyolipoma is a very rare entity and has not been reported in the literature to date. The choice of appropriate management for such a rare disease may be a dilemma because each strategy can harbor its own advantages and hazards.

We present our experience with such a patient over seven years of follow-up. Performing surgery in this patient might have ended up in unilateral or bilateral kidney loss, and he refused the surgery and underwent watchful waiting.

Like conservative management that was successful for more than seven years. In this case, other treatment options such as angioembolization and surgical resection are vital options with their own risks and benefits.

management of a patient with bilateral huge perirenal Angiomyolipoma may be a very controversial issue because different management options harbor their own risks and benefits.

A 64-year-old male with abdominal enlargement and discomfort complaint referred to our clinic in 2012. The patient experienced the indicated symptoms (abdominal enlargement and discomfort) for two months. No other symptoms were detected, such as hematuria, fever, or urinary tract issues. The patient's history also included hypertension and coronary artery disease, and hence he had undergone coronary artery bypass graft in the last year. Furthermore, the patient has been using atenolol, aspirin, and losartan after surgery. Moreover, taking the above medications had helped control his hypertension condition. The patient also suffered from hypothyroidism, but taking Levothyroxine changed this condition to Eu-thyroid. In physical examination, a large mass was palpated at the entire surface of the abdomen, covering the entire abdominal and pelvic cavity. However, no evidence of lymphadenopathy was found. Laboratory findings included: Hemoglobin = 14.6 mg/dL, serum creatinine = 1.29 ng/dL, and urine analysis was normal.

In abdominopelvic ultrasonography, the bilateral kidneys were not visualized well in outline. Moreover, bilateral renal beds were replaced by a huge, poorly echoic ill-defined heterogeneous structure without corticomedullary junction differentiation. Abdominopelvic computed tomography (CT) scan also revealed bilateral extra-renal masses engulfing both kidneys, thereby pushing them to mid-line. Furthermore, the masses were extended down to the pelvis and considered heterogeneous with areas of fat density and mild enhancement after contrast injection. The masses were also well-marginated, and the interface between the tumors and the kidneys was sharp. Both kidneys were located medially with apparently normal shape but reduced parenchyma (Figures 1 and 2). 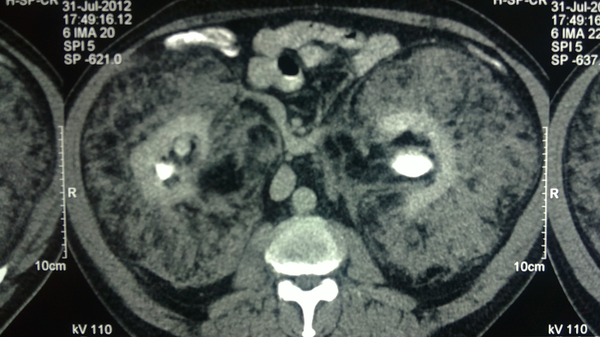 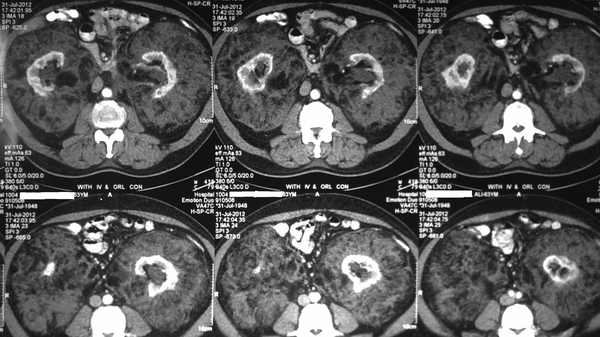 Owing to the abnormal nature of the masses and the fact that the possibility of malignancies such as Liposarcoma could not be ruled out, a percutaneous CT-guided biopsy was also performed. The pathological findings of the biopsy were as follows: neoplastic tissue composed of myxoid and sclerotic areas, mature lipocytes, and abnormal dysplastic vessels with the radial arrangement. Therefore, the final pathological diagnosis was conclusive as Angiomyolipoma. Considering the previous findings as well as the radiologic diagnosis, the chances for spontaneous intratumoral hemorrhage were high. On the other hand, the outcome of surgery could not be fully determined, and it could have resulted in unilateral or bilateral kidney loss. Subsequently, the option of surgery alongside its advantages and risks was explained to the patient comprehensively. However, he refused to undergo the procedure and chose the option of continuing to be under supervision that consisted of regular blood pressure and serum creatinine monitoring as well as serial imaging. For seven years (from 2012 to 2019), there was no significant growth in the patient’s tumor size, and the patient did not manifest any new symptoms. Also, his blood pressure and serum creatinine levels remained stable. At the time of presenting this report, the patient continued exhibiting a normal life and engaged in normal daily activities and daily jobs.

perirenal tumors are divided into two major groups. The first and the most notable are de-novo tumors originating from the kidney, renal capsule, or perinephric fat, and the second group includes the tumors exhibiting the local presentation of a systemic disease (1). Another classification system for perinephric tumors is based on the pattern of distribution and radiologic features of tumors. According to this system of classification, there are four subgroups: first, solitary soft tissue masses like renal cell carcinoma (RCC), Lymphangioma, Hemangioma, and Leiomyoma. Second, soft tissue ring-like lesions such as Lymphoma, retroperitoneal fibrosis, and Erdheim-Chester disease. Third, tumors containing macroscopic fat, including Angiomyolipoma, Liposarcoma, Lipoma, Myelolipoma, and extramedullary hematopoiesis. Fourth, multifocal soft tissue masses such as metastasis and plasma cell tumors (1).

In the aforementioned patient, the presence of macroscopic fat in CT scan led the diagnosis to the third group of tumors mentioned above (tumors containing macroscopic fat). As a result, the possibility of their malignancy was slim in bilateral tumors that have completely sharp margins. However, owing to the fact that a low-grade sarcoma could not be entirely ruled out based on imaging, especially because Liposarcoma is the most common fat-containing tumor of retroperitoneum (2), a percutaneous biopsy was also performed, and therefore, the diagnosis of Angiomyolipoma was confirmed. Extraadrenal perirenal Myelolipoma has also been frequently reported in the literature and could mimic Angiomyolipoma radiologically; however, they can be differentiated by histology (3). The presence of accumulations of myeloid tissue in Myelolipoma is a feature that can be differentiated from Angiomyolipoma (4, 5). Extramedullary Hematopoiesis can also lead to radiologic or even histologic features similar to Myelolipoma. In such cases, a bone marrow biopsy is indicated. The establishment of Myelofibrosis and myeloid Metaplasia helps distinguish these two entities (6).

Many open and laparoscopic kidney-saving procedures for the management of extra-renal tumors have been reported in the literature. However, the engulfment of the kidneys by the tumors made uncertain the prognosis of the surgery in the present patient. Unexpected intraoperative hemorrhage can become problematic during the procedure, which may lead to unilateral or bilateral nephrectomy. However, perioperative angiography to evaluate vascular anatomy of kidneys in relation to tumor vasculature and possibly performing angioembolization of the main tumoral vessels may reduce the morbidity of the surgery dramatically if a surgical plan is made (7). Being symptomatic, large size tumors or the ones that cause severe impairment of renal function could be indications for surgical intervention with the object of nephron-sparing (unilateral and if it would be more successful than bilateral).

Copyright © 2021, Author(s). This is an open-access article distributed under the terms of the Creative Commons Attribution-NonCommercial 4.0 International License (http://creativecommons.org/licenses/by-nc/4.0/) which permits copy and redistribute the material just in noncommercial usages, provided the original work is properly cited.
download pdf 5.84 MB Get Permission (article level) Import into EndNote Import into BibTex
Number of Comments: 0