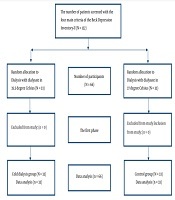 Effect of Cool Dialysate on Depression in Patients with Chronic Renal Failure Treated with Hemodialysis: A Randomized Clinical Trial

Depression is one of the most common psychiatric problems in hemodialysis patients.

This study aimed to evaluate the effect of cool dialysate on depression in patients with chronic renal failure treated with hemodialysis.

This randomized clinical trial was performed on 66 hemodialysis patients suffering from depression. Patients were selected by a convenience sampling method and divided equally into intervention and control groups randomly by permuted block allocation, each group containing 33 patients. Data were acquired with the Beck Depression inventory-I. The intervention and control groups underwent one month of treatment with cool dialysate at 35.5 and 37°C, respectively. The severity of depression for each group was measured at the end of each treatment stage and two weeks after the intervention. Data were analyzed using R version 25 software with a confidence level of 95%.

The application of cool dialysate as a non-pharmacological method did not significantly reduce the severity of depression in patients undergoing hemodialysis. Therefore, it is advised to perform further studies that include more research units from different geographical locations, considering a longer intervening duration.

Due to the severity of the issue, effective depression therapies are required in routine dialysis care (6). Influential factors include pharmacological and non-pharmacological therapies such as psychotherapy (interpersonal psychotherapy, cognitive and behavior therapy), electroconvulsive therapy (ECT), or a combination of them, which bring negative feedback and dissatisfaction (3, 7). These treatment options, especially the administration of antidepressants, have been associated with little to no evidence of efficacy and safety. As a result, patients are often excluded from major clinical trials due to safety concerns. The number of studies carried out on subjects belonging to a small population cannot be generalized to the whole community (8). Most antidepressants are protein-bound and will be metabolized in the liver; therefore, they are not eliminated by dialysis. However, the relative activity and the excretion of these metabolites in patients with chronic kidney disease (CKD) are often unclear (9).

Cool dialysate is an intervention that can improve the quality of life of patients, boost sleep quality, reduce fatigue, enhance the dialysis quality, alleviate itching, and improve restless legs syndrome (RLS) (10, 11). Cold dialysis reduces some physical problems, which are significant causes of depression in hemodialysis patients. Therefore, this intervention can reduce depression severity among the patients (10). Among multiple studies on the application of cool dialysate, the work by Ghanbarabadi et al. (12), Soleimani et al. (13), and Parker et al. (14) led to the increased quality of sleep in hemodialysis patients. According to Sekercioglu et al.’s study (15), conducted on sleep quality, depression, and quality of life in patients with chronic renal failure, it can be concluded that cool dialysate may affect depression.

Fatigue is one of the most prevalent and distressing symptoms that affect individuals’ quality of life. Due to the high frequency of fatigue in patients with chronic renal failure (70% - 97%) and its association with depression, it can be said that daily hemodialysis reduces the symptoms of depression and fatigue, which is in line with the findings of some studies (16-22). According to studies, cool dialysate is an appropriate method to increase the tolerance of dialysis and reduce fatigue, thereby improving depression (23). Furthermore, cool dialysate will boost the patients’ levels of energy and general health with no adverse effect on dialysis adequacy (19).

Therefore, in the light of earlier mentioned criteria, this study aimed to evaluate the effect of cool dialysate on depression in patients with chronic renal failure treated with hemodialysis in Sabzevar.

This is a two-group, triple-blind, randomized clinical parallel trial performed with a before-after design (Iranian Registry of Clinical Trials code: IRCT20200215046495N1). Sampling started on April 20, 2020, and finished on July 21, 2020, at two hemodialysis centers of Vasei Hospital and Kashefi Center. The sample size was determined using G*Power statistical software according to the information obtained from the first 10 patients in each group. The confidence level, test power, and drop-out rate were calculated as 95%, 80%, and 20%, respectively.

After screening by a depression questionnaire, 122 patients were selected from the two centers. According to the inclusion and exclusion criteria, 66 individuals were randomly allocated by the permuted-block method to a control group (33 patients treated with 37°C cool dialysate) or an intervention group (33 patients treated with 35.5°C cool dialysate). The inclusion criteria included informed consent to participate in the study, age of older than 18 years for both genders, being ultimately conscious, and having acceptable speech and listening ability to answer the questions. The exclusion criteria included patients administrated with antidepressants, underactive thyroid (hypothyroidism), and hemoglobin count of less than 8 mg/dL (Figure 1). 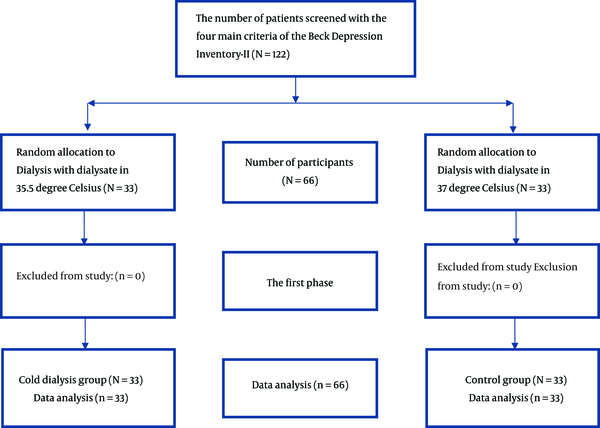 Flowchart of design, groups, and participants of the study

Data were acquired by a demographic questionnaire and the Beck Depression inventory-II (BDI-II). The validity of BDI-II was determined in the study by Taheri Tanjani et al. (cited in Hamidi (20)) with an Internal Correlation (IC) coefficient of 0.81. The reliability of the BDI-II questionnaire were measured by Cronbach’s alpha method of as 83%.

The BDI-II questionnaire consisted of 21 items composed of four sentences. The participants were supposed to encircle the one that expressed their feelings and behaviors. Each item was scored from zero to three, so the participants could achieve a score ranging from 0 to 63. Depression severity was classified into four categories based on the scores: zero to 13 (no or minimal depression), 14 to 19 (mild depression), 20 to 28 (moderate depression), and 29 to 63 (severe depression).

The hemodialysis was performed with a filter, and the device had been calibrated for temperature regulation before the process. Data were collected in three shifts in the morning, afternoon, and evening from the hemodialysis centers. Initially, BDI-II was filled out during hemodialysis before the intervention when the patient was in a calm state by the research assistant for those who met the inclusion criteria.

The temperatures of hemodialysis for the standard and cool dialysate patients were 37°C and 35.5°C, respectively. To manage the research blindly, the data were collected by an assistant. The authors were unaware of both the type of intervention and the allocated groups. Patients were also unaware of the group they were assigned to. This was achieved by covering the screen of the device with a 2 × 1 cm paper so that the participants did not find out which study groups they have been placed in.

The BDI-II questionnaire was filled out before the study. One month after the intervention, to measure depression in both intervention (cool dialysate) and control groups (standard dialysate), depression was evaluated in both groups two weeks later to check the persistency of the intervention. Participants were asked to answer all the information accurately and honestly. The researcher was blinded by assigning two codes of A and B to the groups. He/she was unaware of the allocation method of patients during the analysis.

After sampling and data collection, the forms were coded, and their data were imported into SPSS version 25 software to be analyzed. The Shapiro-Wilk test was used to examine the normal distribution of quantitative data. The inferential data were analyzed by the repeated-measures ANOVA (RM-ANOVA) with a significance level of 0.05.

This study was approved and registered with the code of IR. MEDSAB. REC. 1398. 116 in the Ethics Committee of Sabzevar University of Medical Sciences. The confidentiality of patients’ information was monitored throughout the study. All the subjects gave their informed consent. They were aware that participating in this study was completely voluntary and free from any obligation by the treating physician, nursing staff, the researcher, and the research assistant.

Table 1 shows the demographic characteristics and medical records of patients.

Table 2. Intergroup and Intragroup Comparisons of Depression Scores Before, After, and Two Weeks After Intervention in Control and Intervention Groups

Table 3. Changes in Severity of Depression Based on Time, Groups, and “Interaction Between Group and Time”

Based on the findings, it was indicated that cool dialysate did not reduce the depression level in hemodialysis patients. The study by Mahshavari et al. compared the impact of cool dialysate with standard dialysate in terms of detoxification. It revealed that cool dialysate was effective in preventing hypotension (21). Hypotension is a common complication of dialysis that causes the premature discontinuation of dialysis and severely reduces dialysis adequacy. The reduced adequacy of dialysis will give rise to severe physical complications. The present study investigated the impact of cool dialysate on reducing the physical problems of hemodialysis patients, which could alleviate the severity of depression.

But in this study, cold dialysis had no effect on depression. Perhaps the reason for this lack of effect is causes other than physical factors. Factors such as mental health problems, anxiety, impaired body image and self-concept, fear of death, treatment limitations, job disability, feelings of inefficiency, low life expectancy, loss of social support and family-related plans, marriage, And the high cost of living that is common in hemodialysis patients (26). Since depression is a chronic disease, it seems that the one-month intervention in this study was inadequate. It requires an extended duration to properly examine the effectiveness of cool dialysate on depression.

In this study, dialysis patients were sampled, and the intervention was performed in the COVID-19 peak. The COVID-19 disease has been the greatest public health emergency for international communities since 2020 (27). Along with physical health concerns, COVID-19 can cause mental distress (28). Symptoms of depression, anxiety, and stress caused by this epidemic have been evident globally, especially in patients dealing with chronic conditions. There were reports of suicide in some countries such as South Korea and India due to the anxiety of COVID-19 (29). Meanwhile, the media have increased the severity of fear and anxiety by frequently announcing death rates and hospitalizations (27). Psychological reactions can affect individuals’ behaviors and increase their psychological problems in times of emergencies (29). Therefore, cool dialysate could be ineffective due to the high levels of anxiety and depression in hemodialysis patients due to the COVID-19 pandemic.

Due to the COVID-19 pandemic, the emergency data collection made communication difficult for both the patient and the researcher. Besides, the pandemic itself was a limiting factor of the study. Finally, a one-month intervention seemed to be inadequate for the assessment of the cool dialysate effect.

The results of the study indicated that the application of cool dialysate was ineffective in reducing the severity of depression in hemodialysis patients, but despite the ineffectiveness of this method, the severity of depression intensified by stopping the intervention. It can be inferred that a difference between the two groups could be identified by a prolonged intervention. Therefore, researchers are advised to perform the intervention over a more extended period of six to 12 months to evaluate its effectiveness.

We like to extend our gratitude to the esteemed Vice Chancellor for Research and Technology Department of Sabzevar University of Medical Sciences, the nurses, the authorities of the dialysis departments of Vasei Hospital and Kashefi Dialysis Center, and the patients who kindly cooperated with us throughout the study.

Copyright © 2021, Author(s). This is an open-access article distributed under the terms of the Creative Commons Attribution-NonCommercial 4.0 International License (http://creativecommons.org/licenses/by-nc/4.0/) which permits copy and redistribute the material just in noncommercial usages, provided the original work is properly cited.
download pdf 161.57 KB Get Permission (article level) Import into EndNote Import into BibTex
Number of Comments: 0