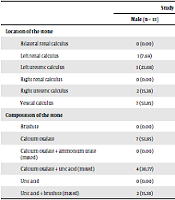 Role of Osteoprotegerin as Novel Marker in Urinary Stone Formers: A Pilot Study

Urinary tract calculus formation can be prevented by identifying molecules and metabolic disturbances that affect this process. Osteoprotegerin (OPG), a cytokine of the TNF receptor superfamily, has been demonstrated to mediate vascular calcification and intimal calcification. Endothelial injury and oxidative stress are known to play a role in urolithiasis in the form of Randall’s plaques.

The present study aimed to compare 24-h urinary and serum OPG levels of patients with and without urolithiasis.

There were significantly higher levels of OPG in serum and 24-h urine samples of cases than in controls. Hence, it requires further large studies to make OPG a diagnostic and prognostic marker.

Urinary stones affect 10 - 12% of the population, with 5 - 10% of the average lifetime risk of stone formation. A multistep process occurs in the formation of urinary tract calculus. The detection of molecules and metabolic disorders that influence this phase offers the ability to intervene in the prevention of stone formation. However, the pattern and incidence of the disease have changed markedly in the last few decades. With a recurrence rate of nearly 50%, it has an essential effect on the health care system (1). Various factors are known to influence urolithiasis. It is clinically significant to look out for factors that can predict the possibility of stone formation in the future, as the stone disease continues to impose an economic burden in developing countries.

Osteoprotegerin (OPG) is a cytokine from the superfamily of TNF receptors. Due to its protective bone effects (Latin: "os" bone and "protegere" to protect), it was named OPG. As known, OPG is also an inhibitory factor of osteoclastogenesis (OCIF) (2). This molecule is known as a pro-inflammatory cytokine. It is shown that vascular calcification and intimal calcification may be mediated by OPG, associated with atherosclerotic plaque formation. Endothelial injury and oxidative stress are known to play a role in urolithiasis in the form of Randall's plaques (3). The relationship between of OPG and urolithiasis has not been studied extensively.

This case-control study was performed on patients visiting the Department of Urology and Renal Transplantation at Dr. PSIMS and RF in 2019-20.

The inclusion criteria for the cases (group A) were a diagnosis of urinary tract stones by plain spiral computed tomography (CT) scan. Patients with urinary tract infection, urinary tract obstruction, genitourinary tract anomalies, critical illness, pregnancy, chronic renal failure needing dialysis, and malignancy were excluded from the study. The controls (group B) were selected from among patients who visited other departments without any complaints of stone disease, with no history of renal or ureteral stones and no evidence of stones on imaging.

This study was accepted by the institution's ethics committee. All subjects were informed of the study’s purposes, and a consent form was obtained from them to be included in the study.

Table 2. Serum and 24-h Urinary Osteoprotegerin Levels Across Various Types of Calculi a

Stone analysis was done for each calculus that we included in our study. It was revealed that the maximum stones were related to calcium oxalate at 45.45%. This was followed by mixed calcium oxalate + uric acid at 27.27%. Pure uric acid stones formed 9.09% of the stone burden, while mixed uric acid + brushite stones formed 9.06% of the bulk. The least common type of calculi belonged to calcium oxalate + ammonium urate stones and pure brushite stones at 4.55% each. Calcium oxalate as part of pure oxalate stones and mixed stones formed 77.27% of the stone burden. Our exploratory analysis did not find any significant difference (P > 0.05) in the osteoprotegerin levels between various stone types though the osteoprotegerin levels were seen to increase universally among all types of stones as compared to controls (Table 3).

Table 3. Distribution of Location and Composition of Calculi Among Study Groups a

This study was undertaken as a pilot study to assess the relationship between osteoprotegerin and urolithiasis. Osteoprotegerin (OPG) is a basic secretory glycoprotein. It is released under basal conditions by endothelial cells upon stimulation with inflammatory cytokines and various circulating hormones. Circulating OPG exists either as a free monomer of or as OPG bound to its ligands, receptor activator of nuclear factor-kB ligand (RANKL) and tumor necrosis factor-related apoptosis-inducing ligand (TRAIL) (4, 5). Oxidative stress is a characteristic feature of the inflammatory response. There has been a link between the activation of leukocytes and other cells and the release of OPG. Besides, OPG can be produced and released by blood cells such as neutrophils and stem cells. Endothelial cells (EC) are a significant source of OPG, especially within the vasculature (6, 7). Vascular endothelial growth factor (VEGF) and platelet-derived growth factor (PDGF) may influence human EC metabolism via Ca2+ signaling mechanisms. Interestingly, it has been reported that, in vascular cells, PDGF up regulates OPG expression (8). Vascular calcification is characterized by the deposition of Ca2+ and inorganic phosphate (Pi) in the form of hydroxyapatite (HA) crystals within the medial or intimal strata of blood vessels, which are the same mineral components found in the bone. Exposure to inflammatory atherosclerotic stress induces pericytes, which could be involved in the onset of the mineralized structure in plaques and the secretion of OPG, with human pericytes secreting high amounts of OPG in comparison with smooth muscle cell (SMCs) and ECs (9, 10).

Studies have also shown that OPG participates in the pathogenesis of atherosclerosis and coronary vascular diseases by amplifying the adverse effects of inflammation (5). There is clear evidence that OPG levels are high in conditions with extra-osseous mineralization. This extra-osseous mineralization is an essential way for the formation of calculi in the urinary tract. Oxidative stress is a postulated mechanism of oxalate-induced cell injury responsible for nucleation and crystal growth in the urothelium (11). Randall (1937) observed the areas of damage associated with subepithelial plaques on the renal papillae, which were supposed to be the future renal calculi.

Though OPG has been studied in chronic infections, intravascular calcifications, and sepsis (12), there are no direct comparative data between OPG and calculus disease to date. Thus, trying to assess the OPG levels among stone formers could make a novel approach for future diagnostic, as well as a prognostic evidence-based practice for subjects with urolithiasis. Our study is the first of its kind where we assessed the OPG levels in cases (group A) of documented urolithiasis and compared it with matched controls (group B), the results showing a good positive correlation. We found that OPG levels were increased in serum and 24-h urine samples of the patients with any stone types. More importantly, we found a negative association between 24-h urine OPG levels and the control group, with 77.27% showing nil or zero osteoprotegerin in the 24-h urine sample.

Copyright © 2021, Author(s). This is an open-access article distributed under the terms of the Creative Commons Attribution-NonCommercial 4.0 International License (http://creativecommons.org/licenses/by-nc/4.0/) which permits copy and redistribute the material just in noncommercial usages, provided the original work is properly cited.
download pdf 113.39 KB Get Permission (article level) Import into EndNote Import into BibTex
Number of Comments: 0