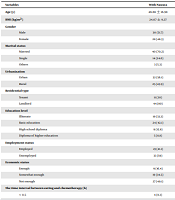 Chemotherapy-induced nausea (CIN) is one of the most common and uncomfortable symptoms in cancer patients, and different factors can be associated with it.

This study aimed to determine different factors associated with CIN in cancer patients.

A total of 144 cancer patients were selected by convenience sampling. The patients at acute phase of chemotherapy were assigned to case group (n = 58) if they had nausea or to control group (n = 86) if they did not have nausea. The patients' data were collected using a researcher-made questionnaire including items on potential factors for CIN through interviews with the patients and according to their medical records. Logistic regression models were used to conduct data analysis, and the correlations in question were expressed as odds ratio (OR) at 95% confidence interval (CI).

The results showed that the chance of nausea increased by 6.4, 2.4, 1.2, and 1.5 times in case of expected nausea, pain, carbohydrate intake, and smelling a specific odor, respectively. The increasing nausea-inducing effect of drugs led to increased chance of post-chemotherapy nausea (OR = 2.366).

Having pain, expecting nausea, carbohydrate intake, smelling a certain odor, and high emetogenic potential of chemotherapy are effective in the development of CIN.

Chemotherapy-induced nausea (CIN) is a debilitating side effect of antineoplastic drugs leading to exacerbated disability and declined adherence to the treatment (1, 2). Nausea is considered as one of the main side effects due to chemotherapy (3). Chemotherapy-induced nausea and vomiting (CINV) may occur up to 120 hours (five days) after initiation of treatment with antineoplastic drugs and can be acute or late. The acute phase occurs within 24 hours after initiation of chemotherapy, and the late phase occurs within 24 - 120 hours (4). Nausea and vomiting occur mainly within the acute phase, adversely affecting the patients' personal and working life (5, 6).

To date, several studies have confirmed the association between certain factors and CIN; these factors include age (7-10), family support (11), lack of food intake (12), type of chemotherapy drug with different emetogenic potential (10, 13), treatment course, and adjuvant radiotherapy (13). However, the association of some factors with CIN is still controversial. While the effects of expecting nausea (7, 14) and female gender (10, 13) on CIN have been confirmed in some studies, some other studies did not report such an association (7, 8). This inconsistency in the findings necessitates further investigation in this regard.

Although, several associated factors have been studied for nausea and vomiting of pregnancy (NVP), and postoperative nausea and vomiting (PONV), these factors were not investigated in the CIN. In this regard, the associations between certain factors such as education level (15), being employed (16), development of nausea after smelling a certain odor, and the satisfaction of social support (17) with NVP were studied. In addition, the effects of body mass index (BMI) (18, 19), smoking (20), narcotics (21), and pain (22) have been investigated for PONV. As far as the researchers investigated, there is no study to evaluate the correlation between CIN and these factors.

This study aimed to investigate the factors potentially associated with CIN.

A case–control study was conducted in the Hematology-Oncology Ward and the Outpatient Chemotherapy Clinic in Hamedan. After the Ethics Committee of the Hamedan University of Medical Sciences approved the study protocol, 144 cancer patients were selected by convenience sampling. The inclusion criteria were being under chemotherapy, sufficiently conscious and able to speak, and receiving the first dose of the chemotherapy medicines since the initiation of the second cycle onwards within the past 24 hours (acute phase). The patients at acute phase of chemotherapy were assigned to case group (n = 58) if they had nausea and to control group (n = 86) if they did not have nausea.

The data on the patients, both with and without nausea, were collected by a researcher-made questionnaire developed according to the relevant literature. The questionnaire consisted of items on sociodemographic and clinical characteristics. The sociodemographic characteristics included gender (13), age (7-10), BMI (23), education level (15), employment status (16), urbanization, residential type, marital status, having health insurance, and economic status. Information about the food consumption (12), the type of the last food consumption before the chemotherapy, the time interval between the last food consumption and chemotherapy, history of smoking and drug abuse (20), having expectation of nausea following chemotherapy (7, 14), feeling nausea following some factors, and satisfaction of social support (17) were also considered.

The questionnaires were filled out through interviews with the patients and their medical records after completion of the acute phase of chemotherapy.

Data analysis was conducted by SPSS software version 13. Descriptive statistics were expressed as frequency and mean. Chi-square and Fisher's exact tests were used to investigate association between the studied variables and nausea. For all tests, the level of significance was 0.05. Since the dependent variable was binary, the logistic regression was used to conduct data analysis, and the result was expressed as adjusted odds ratio (OR).

Table 1. Comparison of the Sociodemographic Characteristics Between Groups a

Table 2. Comparison of the Clinical Information Between Groups a

To investigate the association of the factors between the two groups with CIN, logistic regression models were used according to the crude and adjusted OR.

In the current study, most subjects, either with or without nausea, had meal before the chemotherapy. There was no significant difference between the two groups in terms of the time interval between eating and starting chemotherapy. The results also showed that the chance of nausea in patients who consumed carbohydrates before chemotherapy was 1.288 times higher than those who did not eat any food. However, Booth (2007) reported that lack of eating food before chemotherapy was a risk factor for nausea and vomiting (12).

Our findings showed a significant association between feeling pain and developing CIN such that the likelihood of nausea was 2.426 times higher in patients feeling pain than in those without pain. Consistent with the current study, Gan and Watcha reported that postsurgical pain led to development of nausea and pain after surgery (22, 25). This study further confirms that greater attention should be paid to pain and preventing it in patients under chemotherapy using pharmacologic and non-pharmacologic approaches.

A strength of our study was that CIN-associated factors were investigated in patients with any type, rather than a specific type, of cancer referring for chemotherapy, including lymphoma, leukemia, lung cancer, breast cancer, larynx cancer, skin cancer, bone cancer, and brain cancer. In addition, this study investigated a wide spectrum of variables because nausea occurs most frequently at the acute phase of chemotherapy.

A limitation of the current study was that the results cannot be generalized to the late phase because we investigated the association of the above factors with CIN incidence only in the acute phase. Besides, because the patients were asked questions that required them to recall what happened 24 hours ago, they might not recall everything completely; and this increases the risk of recall bias.

The final model demonstrated that the likelihood of nausea was 2.426 and 6.458 times higher at the acute phase of chemotherapy in patients feeling pain and expecting nausea than in those without pain and not expecting nausea, respectively.

Chemotherapy consumption of carbohydrates or smelling a specific odor in the acute phase led to 1.288- and 1.559-fold increase in the chance of nausea, respectively, as compared to those who did not eat any food or were not exposed to any odor. The chance of nausea increases with the use of high nausea-inducing chemotherapy drugs. Therefore, nurses and physicians are recommended to pay greater attention to these factors and help to reduce CIN significantly through educating and mediating the factors.

The authors acknowledge the vice chancellor for Research and Technology of Hamadan University of Medical Sciences, Iran and all the patients who participated in the research.

Copyright © 2021, Author(s). This is an open-access article distributed under the terms of the Creative Commons Attribution-NonCommercial 4.0 International License (http://creativecommons.org/licenses/by-nc/4.0/) which permits copy and redistribute the material just in noncommercial usages, provided the original work is properly cited.
download pdf 114.61 KB Get Permission (article level) Import into EndNote Import into BibTex
Number of Comments: 0