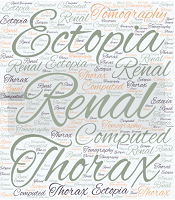 Intrathoracic Renal Ectopia: A Case Report and Review of the Literature

Renal ectopy is a rare phenomenon, which its diagnosis may be delayed due to an asymptomatic condition. The ectopic kidney may even have a normal functional state; however, because of occurring kidney blockade, the risk for kidney stones and even failure may be raised. In many cases, the diagnosis is completely incidental and is based on the request of radiography and sometimes, CT scan even for other reasons. In the therapeutic approach, in cases of kidney blockage, or urine backing up to the kidney, the surgical intervention is highly recommended by excisional removing the mass. Herein, we described a case of ectopic intrathoracic kidney initially presented with mild respiratory distress that was ultimately diagnosed by CT scanning and removed surgically.

The ectopic kidney describes that the kidney is located in an improper location. Although this phenomenon may occur in about one in a thousand births, this abnormality is recognizable in 10% of such cases (1). The overall incidence of this ectopia was reported to be approximately 5 per one million births (2). The main reason for the lack of diagnosis of many involved infants is its accidental diagnosis in radiographic stereotypes and sometimes asymptomatic neonates (3). Herein, we describe a case with renal ectopia inside the chest followed by a review of the literature.

The case presented was a female neonate with a gestational age of 40 weeks delivered by cesarean section. Because of the initial evidence of skull depression fracture due to requiring assist deliveries, the patients had to be admitted to the neonatal intensive care unit. Within hospitalization, the neonate suffered from mild respiratory distress. No abnormality was revealed in general laboratory evaluation. In an initial assessment by chest radiography, appearing haziness diffusely throughout right lung filed along with pneumothorax in right side raised the suspicion of a congenital abnormal mass in the patient's chest. Thus, chest and renal CT scanning were requested. In the CT report, the right kidney was not visible in the right flank; instead, a lentiform structure with homogenous radiotracer uptake was located in the inferior aspect of the right hemithorax right above the liver. The left kidney was visualized in normal size and location. Interestingly, the estimated differential renal function of the right and left kidneys was 49.86 and 50.14%, respectively, both within the normal range. According to such a report, an ectopic intrathoracic right kidney with the proper cortical functional state was finalized. Other assessments by ureters and bladder radiography and also voiding cystourethrography led to normal findings. Due to the finalization of renal ectopia diagnosis, the patient was a candidate for thoracotomy. Following general anesthesia, incision of the fifth space of the thorax was given, and the thorax was opened. The pleural layer was removed, the chest tube placed, and then the ectopic kidney mass observed in the lung lower lobe was removed from the chest, and the thorax was repaired. After the recovery period, the patient was discharged with stable hemodynamics and in good general condition.

Although renal ectopy is a rare phenomenon, the important issue is its early diagnosis due to the patient's sometimes asymptomatic or mild non-specific symptoms (2). In many cases, the diagnosis is completely incidentally and based on the request of radiography and sometimes CT scan even for other reasons (3). Any renal and extra-renal manifestations may appear due to this ectopic mass, such as respiratory distress, intra-abdominal and urinary tract infections, palpating a mass in the abdomen and even the pelvis, and ambiguous pain anywhere in the abdomen and even chest (4). Sometimes, the patient remains completely asymptomatic. The more interesting point is that the ectopic kidney may even have a normal functional state; however, because of occurring kidney blockade, the risk for kidney stones and even failure may be raised (5). As explained earlier, about 1 out of 10 patients with renal ectopia may be diagnosed even during treatment of other disorders (1, 2). In this regard, most cases are usually diagnosed by ultrasonography, intravenous pyelography, CT scanning, or magnetic resonance imaging (6). In the therapeutic approach, some clinicians believe that they do not need invasive interventions as long as these ectopic masses are not symptomatic or are associated with other disorders (7). However, in cases of kidney blockage, or urine backing up to the kidney, the surgical intervention is highly recommended by excisional removal of the mass (8).

The first case of renal ectopia was described by Wolfromm in 1940 (9) by retrograde pyelography. In earlier reports, its incidence in male subjects and left-sided prominence have been also described, while in 10% of cases appeared bilaterally. Interestingly, ectopic kidneys are usually detectable in the chest space, not in other sites, such as the pleura, ureter, or peritonea. The most frequent mechanism explained for renal ectopia includes any abnormalities in accelerating ascent of the kidney, delaying closure of pleuroperitoneal membrane, or persisting the nephrogenic cord that all may occur within embryogenesis (10).

As described here, our case was primarily presented only with mild respiratory distress leading to a direct request for chest radiography followed by CT scanning. The patient was finally discharged following surgical removal of the ectopic kidney and with a good health condition. Some similar cases have been described with the same manifestations and diagnostic and treatment approach. As described similarly by Gupta in 2013 (11), a 20-year-old asymptomatic female patient was initially assessed due to revealing a right lung base opacity on a plain chest radiograph that the final diagnosis of renal ectopia was made by subsequent CT scanning; however, the patient was discharged and followed-up on an outpatient basis without any surgical intervention. Also, a case series by Guarino et al in 2004 (12) described 99 children with renal ectopia that 69 were asymptomatic and evaluated after prenatal or postnatal ultrasound finding, of whom 82 cases were unilateral, and 7 cases were bilateral. The most frequent associated urological abnormality was vesicoureteral reflux, followed by contralateral renal dysplasia, cryptorchidism, and hypospadias. Manzoni et al. (13) also described 13 cases of renal ectopy with female prominence. In their survey, the associated anomalies were present in 7 patients as genito-urinary malformations in 6 cases. Seven patients were surgically treated for the associated urologic abnormalities, and others were treated conservatively. It can be concluded that first, the renal ectopia may be diagnosed incidentally without symptomatic condition even at any age. Some patients may, however need surgical interventions due to its related complications, such as mostly urological abnormalities. In total, we recommend imaging evaluation, especially with CT scanning for those with suspicion of renal ectopia and particularly at early ages.

Copyright © 2021, Author(s). This is an open-access article distributed under the terms of the Creative Commons Attribution-NonCommercial 4.0 International License (http://creativecommons.org/licenses/by-nc/4.0/) which permits copy and redistribute the material just in noncommercial usages, provided the original work is properly cited.
download pdf 78.60 KB Get Permission (article level) Import into EndNote Import into BibTex
Number of Comments: 0