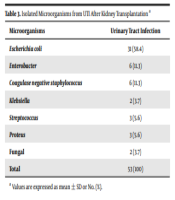 End-stage renal disease (ESRD) needs replacement therapy and most often, kidney transplantation is the best therapeutic option. Urinary tract infection (UTI) is one of the most important complications after renal transplantation that affects transplantation outcomes.

This study aimed to define the incidence rate, UTI risk factors among kidney transplant recipients, and causative organism of UTI and their antibiotic susceptibility.

In this cross-sectional study, we collected clinical, demographic, and laboratory data from 268 transplant recipients in Ali-Asghar Hospital from 2011 - 2018. Data collected from patients were analyzed with SPSS software version 25.

According to the results, 50 (18.7%) had UTI in the first year after renal transplantation. Female gender and underlying cause of renal failure were predisposing factors for UTI. The most common causative organism was Escherichia coli (58.4%). The antibiotic susceptibility results showed nitrofurantoin and meropenem as the most effective antibiotics for Escherichia coli.

The UTI was more common in women and patients with analgesic nephropathy and lupus nephritis. The most common causative organism was E. coli and meropenem and nitrofurantoin were the most effective drug choices.

The last stage of chronic kidney disease (CKD), also called end-stage renal disease (ESRD), occurs when the glomerular filtration rate (GFR) in 1.73 mm2 is less than 15 mL/min. This stage needs replacement therapy, including hemodialysis, peritoneal dialysis, and kidney transplantation (1). Most of the times, kidney transplantation is the best treatment option for those with ESRD. Successful transplantation for these patients ensures much greater survival chances and a higher quality of life compared with dialysis (2). Immunosuppression, concurrent diseases such as diabetes, urinary reflux disease, and elderly age make kidney transplant recipients particularly prone to infections (3).

Infections remain a significant complication despite advances in immunosuppressive treatment and surgical techniques (4). In addition, infections are still the second leading cause of death in kidney transplant recipients (5). Urinary tract infection (UTI) is the most prevalent infection among renal transplant recipients, accounting for 40 - 50 percent of all infectious sequelae and ranging from six to 86 percent (6).

Most of the UTIs occur during the first year after kidney transplantation (7); however, clinical symptoms in kidney transplant patients specific to UTIs, even in severe infections, may be unpronounced due to immunosuppression (8). Because the clinical features are not typical in this population, the first manifestation of UTI among kidney transplant recipients may even be sepsis (9).

Owing to the impact of UTI on graft survival (10), the aim of this study was to determine the prevalence, causing organisms, antibiotic susceptibility, and risk factors in the first year after kidney transplantation.

This cross-sectional study was performed in Ali-Asghar Hospital. Our population was 268 patients who underwent kidney transplantation from 2011 to 2018. They were selected with simple randomized sampling. After approving this study by the Ethics Committee of Isfahan University of Medical Sciences (code: IR.MUI.RESEARCH.REC.1397.190), we collected clinical, demographic, and laboratory data from these recipients. Demographic data included age, gender, and location of recipients. Clinical data included underlying cause of renal failure, number of transplantations, type of donor (living or deceased), relative relationship between donor and recipient, history of dialysis and type of that (hemodialysis or peritoneal dialysis). Moreover, laboratory data in the first year after transplantation included proven UTI from positive urine culture according to UTI definition, number of UTI, type of causative microorganism, and antibiotic sensitivity based on antibiogram. Urine culture with more than 105 colonies/mL was considered a UTI. All data were analyzed with SPSS software version 25. Descriptive statics, including frequency, mean, and standard deviation (SD), were considered for all variables. Logistic regression models were used to define independent risk factors for infection. P < 0.05 was considered significant statistically.

Table 1. Demographic and Clinical Features of 268 Cases Who Underwent Kidney Transplantation a

Risk factors associated with UTI were compared between UTI and non-UTI subjects. There was no statistically significant difference in the recipients’ mean age, location, number of kidney transplantation, type of donor, history of dialysis, and type of that between the UTI and non-UTI groups. However, UTI was more common in female patients than in males (P-value = 0.001).

Table 2. Separation Frequency of Other Disease Group of Underlying Cause a

Table 3. Isolated Microorganisms from UTI After Kidney Transplantation a

Patients who had polycystic kidney and hypertension were the second most frequent underlying cause among UTI group. Diabetic recipients had a minimum chance for UTI and patients with glomerulonephritis had no chance for UTI in this study (Table 2). In our study, there were seven microorganisms in urine culture of recipients who had UTI. The most common causative organism in UTI group was Escherichia coli (58.4%) and Klebsiella and fungal infections were less common (3.7%) (Table 3).

Antibiograms study for UTI group recipients showed susceptibility to several antibiotics. Based on the reported results, the most susceptible antibiotics for Escherichia coli were nitrofurantoin (17.3%) and meropenem (14.2%) (Table 4).

Table 4. Results of Antibiotic Susceptibility According Antibiogram Tests for UTI Patients a

We observed no correlation between the prevalence of UTI and advanced age. This finding is compatible with a study by Shams et al. in 2017 (13). However, some studies found increasing UTI rates in older age groups and even recognized old age as a risk factor for UTI, contradicting this finding (15, 16). In our study, there was no statistically significant difference in the recipients’ location and accessibility of medical services between UTI and non-UTI groups. Also, we found recipients with analgesic nephropathy and lupus nephritis as underlying causes of renal failure were more susceptible to UTI than other causes, including diabetes mellitus and hypertension. In a previous study that was matched, there was no correlation between the incidence rate of UTI and comorbidities such as diabetes (8, 17). In contrast, in a study by Lim et al., diabetes mellitus was a major predisposing factor for UTI among kidney transplant recipients (14).

Receiving kidney from a cadaveric donor was reported as a risk factor for UTI in kidney transplant recipients in some studies (18). However, in the current study and other studies, including Gozdowska et al. and Elkehili et al.; there was no significant difference between living and cadaveric donors for increasing risk of UTI (8, 19). We did not find a correlation between history of pre-transplant dialysis and the prevalence of UTI. However, Lim et al. showed dialysis before kidney transplantation was significantly higher in the UTI group than in the control group (14). Gram-negative bacteria, including E. coli, Klebsiella, and Enterobacter cloacae, were reported as the commonest causative organisms (16, 20). In our country, Shams et al. (13) showed E. coli as the most prevalent bacteria, causing UTI among kidney transplant recipients compatible with the current study.

In the present study, antibiograms for UTIs were performed to provide patients with more appropriate treatment options. They are useful to improve antibiotic therapy for kidney transplanted patients. Pourmand et al.’s study in Tehran in 2013 reported most isolates from kidney transplant recipients were more resistant to co-trimoxazole and tetracycline and the lowest resistance were related to imipenem (18). In a similar study, Khameneh and Afshar showed E. coli had more resistant to co-trimoxazole and ampicillin compared with nitrofurantoin and nalidixic acid (21). However, in Rivera-Sanchez et al.’s study, 22% of isolates were resistant to ciprofloxacin. In addition, resistance to ampicillin was found in 33% of Gram-negative bacteria (12). Our study expressed a high degree of sensitivity to nitrofurantoin and meropenem for E. coli in comparison to other antibiotics such as co-trimoxazole.

Urinary tract infection was more common in women and patients with analgesic nephropathy and lupus nephritis in our population of renal transplant recipients, which is similar to those studies described by other researchers. The most common causative organism was E. coli. Also, meropenem and nitrofurantoin were the most effective drug choices. More studies concerning the predisposing factors are very important to avoid UTI after kidney transplantation. A long-term follow-up among renal transplant recipients should be considered to give accurate picture of UTI after kidney transplant.

Copyright © 2022, Author(s). This is an open-access article distributed under the terms of the Creative Commons Attribution-NonCommercial 4.0 International License (http://creativecommons.org/licenses/by-nc/4.0/) which permits copy and redistribute the material just in noncommercial usages, provided the original work is properly cited.
download pdf 119.21 KB Get Permission (article level) Import into EndNote Import into BibTex
Number of Comments: 0