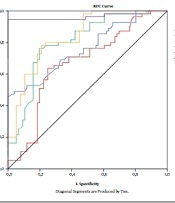 Iron management is essential for anemia treatment in chronic kidney disease. The reticulocyte hemoglobin equivalent (RET-He) is a reticulocyte parameter that reflects hemoglobin synthesis of newly formed erythrocytes in the bone marrow in real-time.

Nearly 42% of patients had ID. The mean concentration of RET-He in CKD patients with ID was significantly lower than that of patients without ID (P < 0.001). Based on the Receiver Operating Characteristic (ROC) curve model, RET-He had a good predictive value for ID in CKD patients (AUC = 0.762; P < 0.001; cut-off value: 28.15 g/L, the sensitivity of 45.5%, and the specificity of 100%). Serum iron, RET-He, serum albumin, and mean corpuscular volume (MCV) were independent risk factors to predict ID in CKD patients.

This study demonstrated that RET-He is an appropriate index to predict ID in CKD patients.

Chronic kidney disease (CKD) is a widespread health problem affecting millions worldwide. CKD not only is associated with increased incidence, prevalence, and cost of treatment but also leads to end-stage CKD. Anemia is a common complication of CKD that contributes to reduced quality of life and poor treatment outcomes (1, 2). Erythropoiesis-stimulating agents (ESAs) promote erythropoiesis in CKD patients; however, iron deficiency often leads to decreased response to treatment with ESA (3). Iron deficiency often leads to increased doses of ESAs, causing adverse effects in patients (4). Therefore, the assessment of iron status in CKD patients is essential. In clinical practice, clinicians often use traditional markers to evaluate iron status, such as serum iron, ferritin, and transferrin saturation (TSAT) levels (5). Reticulocyte hemoglobin equivalent (RET-He) is a new indicator to assess the iron status of immature erythrocytes, which can be measured by a flow cytometry technique (4). RET-He is a parameter that reflects hemoglobin synthesis by newly formed red blood cells in the bone marrow in real-time. In order to clarify the role of RET-He in predicting ID in CKD patients, we conducted this study to "evaluate the role of Reticulocyte hemoglobin equivalent (RET-He) for predicting iron deficiency in chronic kidney disease patients."

This study aimed to evaluate the RET-He role in predicting iron deficiency in CKD patients.

Following a descriptive cross-sectional observational design, this study was conducted on 131 adult patients with CKD stages 3 - 5 attending the Department of Nephrology and Hemodialysis, Military Hospital 103, from October 2019 to October 2020. Patients aged 16 years and above, in both genders, diagnosis with CKD stages 3 - 5 (without undergoing hemodialysis) who were willing to participate were recruited in this study. We excluded patients who were on renal replacement therapy, or had a history of receiving EPO within the previous two weeks, or had a history of receiving iron therapy, and those with evidence of bleeding, infection, or blood transfusion within the past six months.

Complete blood count and reticulocyte indices were performed on a Sysmex XN1000 analyzer, Japan. RET-He was measured in the reticulocyte channel by flow cytometry using a Polymerthin fluorescent dye.

All the continuous data were represented by the mean and standard deviation (for normally distributed data) or by the median and interquartile (for non-normally distributed data). These data were compared by the Student's t-test or Mann-Whitney U test, respectively. Categorical data were presented by the frequency with percentage and were analyzed using the Chi-square test. Pearson correlation was used to measure the degree of the association between linearly related variables. The receiver operating characteristic (ROC) curves with the area under the curve (AUC) were calculated to predict ID. Multivariate adjusted regression analysis was performed to determine the independent risk factors for ID (using a backward selection procedure). Statistical analysis was calculated by the Statistical Package for the Social Science version 22.0. A P-value < 0.05 was considered significant.

Table 1 shows the baseline characteristics of all patients. The mean age of all patients was 51.56 ± 18.2 years, in which the proportion of males was more than 70%. There were 51 patients with CKD stages 3 - 4 in our study, and 80 patients had CKD stage 5. In our study, the proportion of hypertension, anemia, and ID were 84%, 93.1%, and 42%, respectively. The mean RET-He concentration was 30.2 ± 3.69 g/L. When comparing the demographic and laboratory characteristics between the two groups (ie, CKD stages 3 - 4 and CKD stage 5), we found no difference in some baseline characteristics such as the mean age, gender, body mass index (BMI), anemia, as well as some laboratory indices such as MCV, MCH, MCHC, absolute reticulocyte counts, and serum iron concentration. Besides, as shown in Table 1, patients with CKD stage 5 had a significantly higher proportion of hypertension, CGN etiology, moderate, and severe anemia; higher median concentration of urea, creatinine, hs-CRP, reticulocyte percentage, RET-He, serum ferritin, and TSAT; lower eGFR, serum albumin level, TIBC, and proportion of ID, as compared to those of patients with CKD stages 3 - 4.

Table 2. Comparison of Some Hematological Indices Based on Iron Deficiency Status (N = 131) 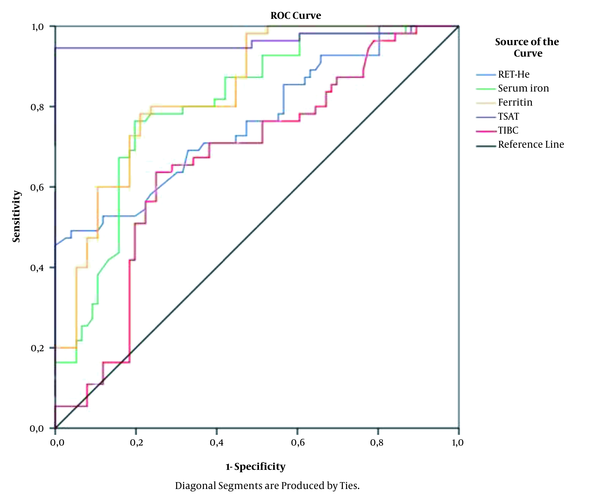 The prevalence of anemia usually increases with the CKD stage. The more severe the renal function is, the higher the proportion of anemia and its severity. This reflects the pathogenesis of chronic renal failure. As the kidney function decreases drastically, the severity of metabolic and endocrine disorders also increases, in which the disturbance of erythropoietin secretion worsens (10-12). In addition, inflammatory cytokines inhibit hematopoiesis in the bone marrow due to the development of alkaline balance disorder and increased levels of free radicals, which may worsen anemia (13). Many subsequent studies provided evidence to better understand the causes and mechanisms of anemia in CKD patients more fully. All three mechanisms of anemia had been seen in CKD patients, including reduced hematopoiesis in bone marrow, increased destruction of red blood cells, and blood loss (14).

Since the KDOQI 2006 workgroup recommended targeting serum ferritin levels of more than 100 ng/mL in patients with non-dialysis ESRD, some randomized control studies showed that iron treatment had erythropoietic effects in patients with stages 3 – 5 CKD and ferritin levels exceeding 100 ng/mL (8, 15). Currently, the Vietnamese Nephrology Association covers the use of intravenous iron in patients with CKD and with TSAT < 20.0% or ferritin < 100 ng/mL, and Hb lower than 10 g/dL. In our study, the total ID proportion was 42%. When investigating iron status in CKD patients, we found that patients with CKD stage 5 had a significantly lower proportion of ID than patients with CKD stages 3 - 4 (58.8% compared to 32.2%). This result can be attributed to the fact that most patients with CKD stages 3 - 4 were newly discovered and had no history of receiving treatment. Therefore, the proportion of ID was higher than patients with stage 5 CKD who received treatment. Alzaheb et al. reported that ID anemia was prevalent (12.5%) among female university students in Saudi Arabian. They also reported that inadequate iron intake was a risk factor for anemia (16). In our study, the median concentration of serum ferritin and TSAT were significantly lower, and the median concentration of TIBC was significantly higher in patients with CKD stage 5 than stages 3 - 4. It can be attributed to the fact that in patients with chronic renal failure, ID can be caused by several factors such as inadequate iron intake due to poor diet or restrictive diets, reduced iron absorption, and blood loss through heavy periods or internal bleeding (17, 18). Several biochemical indices, such as serum ferritin concentration and TSAT, are used to diagnose ID. However, these tests also have certain restrictions: TSAT% is strongly affected by the daily iron fluctuation, while serum ferritin can be increased in chronic inflammatory diseases (19, 20). Therefore, RET-He has become a potential indicator to replace ferritin and TSAT to assess iron storage in CKD patients because it directly evaluates the iron used for the hemoglobin biosynthesis throughout erythropoiesis (21).

As results in Table 1 indicate, the mean value of the reticulocyte percentage (RET%) was 2%; absolute reticulocyte count (RET#) was 0.071 T/L, and reticulocyte hemoglobin equivalent (RET-He) was 30.2 pg. In our study, both percentage and the absolute value of reticulocytes were higher than those of Maconi et al., who studied over 200 dialysis patients (1.45% and 0.05 T/L, respectively). However, the concentration of RET-He in our study was lower than that of Maconi M. et al. (30.2 pg compared to 33.9 pg) (22). Miwa et al. studied 217 hemodialysis patients and showed that the RET‐He mean value was 32.4pg (23).

The observed difference in the findings of these studies can be attributed to the characteristics of participants. In our study, patients had not been treated with any renal replacement therapy or iron supplementation treatment. Therefore the proportion of patients with iron deficiency anemia in our study were higher than those above studies.

As shown in Table 2, the mean concentration of MCHC and RET-He in CKD patients with ID was significantly lower than that of patients without ID (P = 0.001 and P < 0.001, respectively). This finding is entirely consistent with the characteristic of iron-deficiency anemia, hypochromic anemia, and decreased concentration of RET-He.

Many studies used RET-He as a reliable indicator to assess ID in CKD patients. Based on the ROC curve analysis (Figure 1), RET-He had a good predictive value for ID in CKD patients compared to some traditional iron indices (AUC = 0.762; P < 0.001; cut-off value: 28.15 g/L, the sensitivity of 45.5%, and the specificity of 100%). Our results were similar to those of Miwa et al.. In this study, RET-He had a good predicting value for ID with AUC = 0.776; cut-off value = 33pg; sensitivity = 74.3%; specificity = 64.9% (23). Brugnara et al. also showed that at the cut-off level of 27.2 pg, RET-He had a diagnostic value for ID with AUC = 0,913; P < 0.0001; sensitivity up to 93.3%; specificity of 83.2% (25). A multivariate regression model using backward selection criteria was established to confirm the predictive value of RET-He in predicting ID in CKD patients. The results presented in Table 4 show that serum iron, RET-He, serum albumin, and MCV were independent risk factors for predicting ID in CKD patients.

In conclusion, RET-He had a good predictive value of iron deficiency in CKD patients compared to some traditional iron indices.