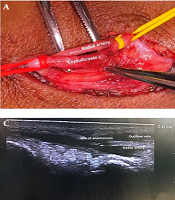 This study was conducted from April 2020 to January 2021 on end-stage renal diseases (ESRD) patients undergoing an operation for anatomical snuffbox AVF creation at our center after taking permission from the institutional ethics committee and written informed consent from patients.

Thirty-five ESRD patients underwent snuffbox arteriovenous fistula (SBAVF) creation, including 68% males and 32% females. Diabetes mellitus was noted in 40% and hypertension in 80%. Successful AVF maturation was noted in 92% (69.57% of males and 30.43% of females). The mean RAD assessed on color Doppler ultrasonography (CDUS) preoperatively was 1.79 mm, while the peak velocity of the radial artery at the snuffbox was 23.80 cm/s.

We recommend applying the side-to-side configuration as its anastomosis angle is less owing to the lesser kink on the anastomotic site. A longer segment of anastomosis is achieved, and better fluid dynamics and WSS profiles are seen in this configuration with good outcomes.

Angioaccess is considered the "Tendon of Achilles" for hemodialysis. Arteriovenous fistula (AVF) is the commonly entailed vascular access for hemodialysis. The anatomical snuffbox should be the preferred choice for AVF creation as being the most distal location in the upper limb. Anatomical snuffbox AVF was described by Rassat et al. in 1969 (1). AVF planning should be done as distally as possible in a non-dominant upper limb. This provides a longer arterialized vein segment and preserves the proximal sites of AVF in cases of primary failure (2). The autologous posterior radial artery branch and cephalic vein anatomical snuffbox fistulas are, to date, the most distal vascular access described (3). Many surgeons still prefer the radiocephalic approach over the snuffbox for AVF creation due to increased technical difficulty in dissection and a smaller caliber of vessels in the snuff box (4). The depression at the radial part of the wrist is called the anatomical snuffbox (AS), bounded by the tendon of the extensor pollicis longus on the medial border and the extensor pollicis brevis and abductor pollicis longus on the lateral border (5). The proximal border is formed by the styloid process of the radius and the floor by the carpal bones (6). Physical examination of vessels has limitations due to variation in the patient's body habitus, subsequently impacting AVF maturation. To overcome these limitations, one can use color Doppler ultrasonography (CDUS) as a non-invasive modality for assessing vascular access (7, 8). Little is known about substantiating CDUS for anatomical snuffbox AVF. Accordingly, the present study evaluates the outcomes of anatomical snuffbox AVF by preoperative and postoperative color Doppler scans. It also determines the anatomical snuffbox AVF maturation rate concerning preoperative radial artery diameter (RAD), cephalic vein diameter (CVD), cephalic vein distensibility, and peak systolic velocity (PSV).

This study was conducted from April 2020 to January 2021 on end-stage renal diseases (ESRD) patients undergoing an operation for anatomical snuffbox AVF creation at KLES Dr. Prabhakar Kore Hospital and MRC, Belgaum, Karnataka, after taking permission from the institutional ethics committee and written informed consent from patients.

We gathered demographic data, such as age, gender, detailed medical history (associated with the illness, e.g., diabetes mellitus and hypertension), history of addiction, occupation, and thorough physical and clinical examination. All patients were examined per a standard color Doppler protocol. An ultrasound scanner BK MEDICAL (PROFOCUS) was used to map the vasculature of the non-dominant upper limb snuffbox with a linear probe of 7 MHz. A B-mode scanning with 5 MHz was done, and the following data were noted:

- Cephalic vein distensibility; the diameter of the vessel was measured before (Cvd0) and at least 2 min after the placement of a sphygmomanometer cuff (Cvd1) that was inflated to a pressure of 50 - 60 mmHg; the increase in the vein diameter was noted CVD (Cvd1-Cvd0) (mm).

- Cephalic vein compressibility and the vessel's condition, whether supple or hard to palpate.

All patients were operated on by a trained surgeon with a trained assistant. The procedure was done under local anesthesia. Xylocaine 2% was infiltrated over the snuffbox skin, and a subcutaneous tissue longitudinal incision of around 3 cm was made and deepened in layers until the cephalic vein was visualized. The vein was mobilized for 5 - 6 cm length and any tributaries ligated. The posterior branch of the radial artery was then mobilized for 3 to 4 cm, securing any branches with electrocautery. Elastic loupes took proximal and distal control of the vein and artery, and no clamps or bulldogs were used as they would interfere with the anastomosis (Figure 1A). A longitudinal venotomy and arteriotomy were then made for a length of 8 mm by 1 cm, and 20 cc of the heparinized solution was injected into the vessels. A side-to-side anastomosis was made using proline 7-0 double-needle suture in a continuous pattern (Figure 1B). The skin was closed with 3/0 ethilon interrupted sutures. Successful AVF showed visible distension of the vein and palpable thrill. Patients with a weak thrill or weak bruit on auscultation were postoperatively heparinized and reassessed after 12 - 24 h. We did an OPD-based follow-up via a color Doppler study after 2, 4, and 6 weeks, and blood flow across the AVF, outflow vein diameter, and depth from the skin surface were also recorded. A blood flow of 200 mL/min across the fistula measured by a flow meter during dialysis was defined as technical success. AVF with poor vein maturation due to vein thrombosis never provided vascular access and was defined as primary failure. AVF failing after 6 - 10 weeks was defined as a secondary failure. 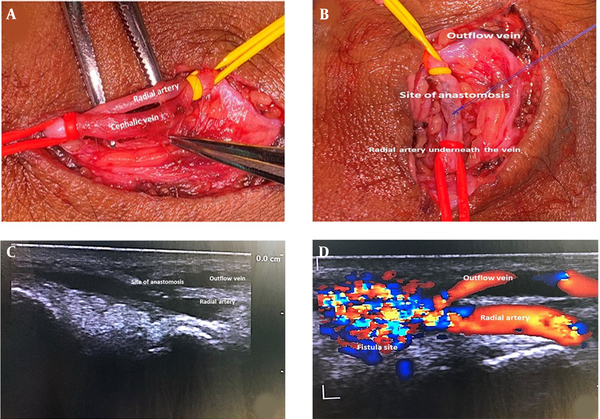 Within nine months, 35 ESRD patients underwent snuffbox arteriovenous fistula (SBAVF) creation, of whom 68% were males, and 32% were females. History of diabetes mellitus was noted in 40%, and hypertension was noted in 80%. Successful AVF maturation was noted in 92% (69.57% of males and 30.43% of females). The mean RAD assessed on CDUS preoperatively was 1.79 mm, while the peak velocity of the radial artery at the snuffbox was 23.80 cm/s. The mean cephalic vein diameter was 1.5 mm with a distensibility of 2 mm (Table 1). Postoperative CDUS at 2, 4, and 6-week intervals was carried out, and the mean diameter of the outflow vein (Table 2), the distance of the outflow vein from the skin, and the velocity of blood flow across AVF (Table 3) were noted (Figure 1C and D ). Blood flow > 200 mL/min during hemodialysis (HD) was present in 92% of the patients (Table 4). Of 35 patients, 33 had successful AVF maturation, while two patients developed thrombosis in the immediate postoperative period and were declared a primary failure. However, there were no secondary failures in the rest of our cases until the follow-up of six weeks.

Table 1. Comparison of the Vitals of Patients Preoperatively a

The AVF creation in the non-dominant upper limb should be the objective while planning vascular access for hemodialysis (9, 10). Snuffbox AVF was mentioned as an alternative to radio cephalic AVF in society's guidelines for vascular surgery (11). In the upper limb, the radial artery is consistently palpable on the floor of the snuffbox, and the cephalic vein travels near the snuffbox after originating between the thumb base and index finger. Upper limb vessel mapping is essential for individuals planning for vascular access as recommended by the NKF-DOQI (12) to evaluate the anatomy and functionality of vessels (13-15).

In our study, all patients underwent a preoperative USG of the snuffbox vessels of the proposed AVF limb. Then, we measured the RAD, peak velocity of the radial artery, cephalic vein distensibility, and cephalic vein diameter, and compared them with postoperatively data at 2, 4, and 6-week intervals by measuring the diameter of the outflow vein, the velocity of blood flow across the anastomosis, and the distance of the outflow vein from the skin. Tao et al. (16) compared AVF in the snuffbox and forearm and concluded that the snuffbox should be the first choice in permanent vascular access, as its complications (pseudoaneurysm, congestive cardiac failure) were significantly fewer.

The majority of the individuals planned for AVF creation at the snuffbox met the anatomical criteria in a study by Hull et al (17), i.e., vessels (artery and vein) more than 2 mm in diameter and within a distance of 1.5 mm from each other. A study by Wong et al. (18) proposed an arterial luminal diameter of ≥ 2.0 mm and a venous diameter of ≥ 2.5 mm; if these criteria were to be considered for AVF creation, most SBAVFs and half of the wrist AVFs would have been abandoned. In our study, the mean cephalic vein and radial artery diameter were 1.5 mm and 1.79 mm, respectively, with a successful maturation rate of 92% at six weeks, and the diameters of vessels used to perform AVF were less than the proposed studies to date.

Flow and intimal hyperplasia development are affected by the anatomy of the vessels and anastomotic configuration (19). A research conducted by Hull et al. (17) compared side-side and end-to-side anastomoses on a computer-based model with computational fluid dynamic (CFD) and concluded that AVFs with side-to-side (STS) configuration had lower intimal hyperplasia than end-to-side AVFs (20). In our study, all 35 AVFs were created in a side-to-side fashion owing to the proximity of the vessels. The angle of anastomosis decreased, and the risk of vein rotation was minimal, so kinking of the anastomotic site was minimal, and changing the locally disturbed flow patterns probably would lead to minimal development of neointima. As compared to end-to-side AVF, side-to-side configuration AVF showed higher one-year patency rates of 92% with a higher rate of venous hypertension and upper limb edema, as stated by Tonelli et al (21). We observed that none of the patients had postoperative limb edema, and no steal phenomenon was seen with a success rate of 92% over six weeks.

Though technically challenging, we recommend applying the side-to-side configuration for AVF creation, as its anastomosis angle is less owing to the lesser kink on the anastomotic site. Besides, a longer segment of anastomosis is achieved, and better fluid dynamics are seen in this configuration with good outcomes. A preoperative color Doppler USG of the vessels for AVF construction helps predict the maturation of AVFs; hence, it should be included in our daily routine of AVF creation. The study's limitations were its non-randomized mode and smaller sample size than determined (as the study was conducted during the COVID-19 pandemic). Besides, the study was planned and executed at a single center in a short period. Further studies are required with a larger sample size to compare the success rates and complications between end-to-side (ETS) and STS configuration snuffbox AVFs.

Copyright © 2022, Author(s). This is an open-access article distributed under the terms of the Creative Commons Attribution-NonCommercial 4.0 International License (http://creativecommons.org/licenses/by-nc/4.0/) which permits copy and redistribute the material just in noncommercial usages, provided the original work is properly cited.
download pdf 4.20 MB Get Permission (article level) Import into EndNote Import into BibTex
Number of Comments: 0