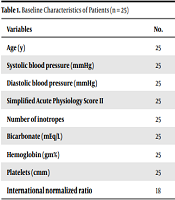 This study assessed the utility of citrate dialysis for such patients in a limited-resource setting.

Among 25 patients studied with multiple hemodialysis sessions, blood flow and dialysate flow were observed to be better in heparin-free citrate dialysis with flushing. There were further advantages of lesser dialyzer clotting and more reuse of dialyzers. Metabolic differences were insignificant. Heparin-free citrate dialysis with or without flushing was equally effective and safe, compared to heparin-free saline flush dialysis, in patients with or without liver impairment.

Acute kidney injury (AKI) patients in the intensive care unit (ICU) are complex to manage (1). Despite advances in renal replacement therapy (RRT) and critical care in recent years, the mortality rate remained high (2, 3). The risk, injury, failure, loss of kidney function, and end-stage renal failure (RIFLE) criteria consist of three graded levels of injury (i.e., risk, injury, and failure) based upon either the magnitude of the rise in serum creatinine or fall in urine output and two outcome measures (i.e., loss of kidney function and end-stage kidney disease [ESKD]) (4).

Heparin is the conventional anticoagulant used during hemodialysis. When there are contraindications for heparin use, namely perioperative period, active bleeding, deranged coagulation profile, or heparin-induced thrombocytopenia, it is necessary to resort to heparin-free dialysis in AKI patients admitted to the ICU. Dialyzer clotting is common in patients undergoing heparin-free dialysis (5, 6).

Citrate dialysis, where citric acid functions as an anticoagulant, is an alternative to heparin-free dialysis with advantages, such as less dialyzer clotting, more dialyzer reuse, and a better-delivered dose of dialysis. Citrate dialysate has been successfully used in regional citrate anticoagulation (RCA) and has been more effective than repeated saline flushing of the extracorporeal circuit (7). Citrate accumulation/toxicity due to failure to metabolize citrate, especially in chronic liver disease patients, is a rare problem due to the low concentration of citrate used in the dialysate. Citrate dialysate has been used for sustained low-efficiency daily dialysis (SLEDD) without any evidence of citrate accumulation or development of hypocalcemia in the presence of severe liver dysfunction (8, 9).

The current study aimed to assess the safety and effectiveness of citrate dialysis as an alternative to heparin-free saline flushing dialysis in ICU patients with AKI.

This prospective study was carried out at a tertiary care hospital in Mumbai, India. The patients were selected from those admitted to the ICU with AKI and the need for heparin-free dialysis.

(2) Patients with AKI or acute, chronic kidney disease requiring heparin-free dialysis in the ICU with one or more of the following criteria:

(a) Patients with active bleeding

(b) Platelet count < 50,000 and/or international normalized ratio > 1.5 or partial thromboplastin time > 50% above the control value

(d) Perioperative patients for whom heparin could not be used.

(1) Patients requiring heparin-free dialysis but for whom heparin or other anticoagulant was used to treat other conditions (e.g., probable or proven deep vein thrombosis, pulmonary embolism, and unstable angina).

(4) Patients who were unwilling to participate in the study

A Citrasate® solution was used in the present study. It was similar to the bicarbonate dialysis solution, except for having 2.4 mEq/L citrate and acetic acid of 0.3 mEq/L instead of 4 mEq/L in the bicarbonate dialysis solution. A small amount of citrate (0.8 mmol/L, i.e., 2.4 mEq/L) was used in comparison to that of RCA (4 mmol/L). This solution was used instead of acetic acid as the acidifying agent. This citrate binds with calcium and inhibits blood coagulation at the dialyzer membrane surface, resulting in better dialyzer clearance, less dialyzer clotting, and increased reuse. Citrasate® concentrate is available in all standard concentrations and formulations, requiring it to be poured into a standard A concentrate container and attached to the dialysis system. Therefore, no additional patient or system monitoring is needed beyond those typically employed in standard dialysate formulations treatment (10).

All dialysis sessions were carried out with Fresenius 4008S machines, and F6 dialyzers were used for all patients (11). The fiber bundle volume (FBV) was calculated (by machine) after each dialysis session, and a dialyzer with FBV of > 80% of the baseline value of that session was reused for the next session. The present study was approved by the Ethics Committee of PD Hinduja National Hospital and Medical Research Centre, Mumbai, India.

Completed treatment was defined as completing treatment duration as ordered (4 or 6 hours). The clotting of the dialyzer was defined as the early discontinuation of dialysis, beyond 30 minutes, prior to the prescribed time due to circuit clotting in either the lines, chambers, or dialyzer itself (45, 46). The Simplified Acute Physiology Score II [SAPS II] was calculated for each patient after 24 hours of ICU stay (12).

Statistical methods used in this study were Pearson’s Chi-square test, student t-test, analysis of variance (ANOVA), and Mann-Whitney U test. Quantitative data were represented in the form of mean ± standard deviation or median (interquartile range) as per the distribution of the variable, with the former used in cases of data with normality and the latter in the absence of the same. Accordingly, depending upon the normality status, a comparison of quantitative variables by variables with two subgroups was made using an unpaired t-test or Mann-Whitney U test, respectively. The comparison of quantitative data between more than two subgroups of a nominal variable was made using one-way ANOVA. If a significant difference was observed, an appropriate posthoc test was applied for pairwise comparison. The data were analyzed using SPSS software (version 26).

The age of the patients ranged from 26 to 86 years, with the elderly (media = 63) reported as the majority of the study population. The mean age of group A (63 years), group B (60 years), and group C (61 years) did not vary statistically, with a p-value of 0.936. The median SAPS II score among the study population was 63. The patients in group A had a lower SAPS II score than group B (P = 0.0059); however, the difference was insignificant in other comparisons. In 198 dialysis sessions for groups A-C, 63% and 37% of the sessions were SLEDD and IHD, respectively. The IHD was the lowest in group B (6%), in which 94% of the patients received SLEDD.

The groups differed in blood flow and dialysate flow based on ANOVA. In addition, Tukey’s posthoc analysis revealed differences between groups A and B and groups B and C for both blood and dialysate flow (more details in Table 2).

Table 2. Comparison of Variables (Blood and Dialysate Flow) in Three Groups a, b

a One-way analysis of variance

aValues are expressed as No. (SD).

As shown in Table 4, the average reuse of the dialyzer was higher in group B > A (P = 0.018); nevertheless, the difference was not significant in other comparisons.

Table 4. Comparison of Number of Reuses of Dialyzers in Three Groups

a One-way analysis of variance

The percentage of incomplete and complete treatments was not different in the three groups. Dialysis needed to be terminated before completion during 11 out of 198 sessions (5.6%), among which dialyzer clotting and persistent hypotension were the indications for the termination in 8 and 3 sessions, respectively. The groups did not differ significantly in fall in pre- to postdialysis FBV (P > 0.5).

Table 5. Comparison of Pre- to Posthemodialysis Ionized Calcium Differences (mmol/L) in Groups B and C

Numerous patients in the ICU with AKI need RRT, and the mortality rate is still high despite advances in RRT and critical care. Extracorporeal circuit clotting in patients who need heparin-free dialysis can be prevented by either RCA or a low concentration of citric acid. A bicarbonate dialysis solution with a low concentration (0.8 mmol/L) of citric acid is better than heparin-free saline flush dialysis.

There was no difference in the percentage of completed treatments among the three groups. The delivered dose of the dialysis (URR in this study) was comparable in the three groups. The present study showed a significant rise in postdialysis bicarbonate levels in all three groups; nevertheless, the values remained normal. There was a postdialysis rise in ionized calcium in the citrate group (groups B and C) in the present study. No episode of clinically significant hypocalcemia was noted in the present study population, indicating the safety of citrate dialysis, precluding the need to monitor ionized calcium. Hypocalcemia with citrate dialysis is reported in other studies (15, 16). The present study demonstrated that citrate dialysis could be safely used in patients with or without liver failure with no excess risk of hypocalcemia or metabolic alkalosis. Such metabolic issues are reported with RCA (17-20).

The overall mortality of the study population was 40% in this study. Other studies showed a mortality rate of 30-50% in AKI patients requiring dialysis (21-23). The present study showed that citrate dialysis could be performed with either no or infrequent flushing, reducing nursing time and requiring less ultrafiltrate removal, which might be vital in patients with poor left ventricular function in comparison to the saline flushing group.

It can be concluded that citrate dialysis appears to be a safe and effective alternative to heparin-free saline flushing dialysis in ICU patients with AKI, even in patients with liver failure. However, a more extensive prospective study with a large sample size needs to be performed to validate the findings of this pilot study. In addition, a similar study also needs to be performed in patients with ESKD on maintenance hemodialysis to determine whether the results of the present study could be extrapolated to that population.

Copyright © 2022, Author(s). This is an open-access article distributed under the terms of the Creative Commons Attribution-NonCommercial 4.0 International License (http://creativecommons.org/licenses/by-nc/4.0/) which permits copy and redistribute the material just in noncommercial usages, provided the original work is properly cited.
download pdf 115.97 KB Get Permission (article level) Import into EndNote Import into BibTex
Number of Comments: 0