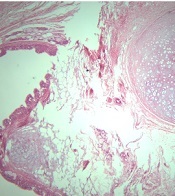 Primary Mature Cystic Teratoma of the Retroperitoneum Presenting as a Suprarenal Mass in an Adult Patient: A Case Report

Primary retroperitoneal mature cystic teratomas (PRPMCT) are uncommon in adults. They typically occur in infants under six months old and young females. So far, some limited case reports have been documented in the literature. This case report presents a rare case of an adult patient with PRPMCT aged over 30 years.

The patient was a 34-year-old female with PRPMCT in the site of the left adrenal gland and abdominal discomfort. Computed tomography (CT) scan revealed a 66 mm hypodense lesion with fat attenuation and calcification in the left retroperitoneum. Laparotomy with resection of the retroperitoneal (RP) lesion was done. Gross examination showed a solid multicystic mass measuring 8x6.5x6 cm. Histopathologic examination revealed a neoplastic tissue composed of mature osseous and cartilaginous tissue associated with stratified squamous epithelium and lumens lined by ciliated columnar epithelium, and the diagnosis was mature cystic teratoma. The patient had an uncomplicated postoperative course without recurrence after seven months of follow-up.

PRPMCT in adults is extremely rare. RP metastasis of primary gonadal teratoma and non-functioning adrenal tumors should be excluded first. Due to the diagnostic difficulty of posterior peritoneal teratoma with radiological imaging and its risk of malignancy, surgical resection would be the most effective diagnostic and therapeutic option. Complete resection of the mass is important to judge the existence of immature and solid components that require a long-time follow-up because of the increased risk of malignancy.

Primary retroperitoneal mature cystic teratomas (PRPMCT), known as dermoid cysts, are rare non-seminomatous germ cell tumors, consisting of well-differentiated parenchymal tissues from a minimum of two layers of germ cell (1, 2). They usually arise in paraxial structures, mostly inside the gonads (1, 3). The extra-gonadal sites make up 15% of all teratomas, and retroperitoneum is below 4% of the cases (1, 3-5). They are more common in infants or young girls, usually within the sacrococcygeal region but very rarely in adults (1-6). Since gonadal malignancies usually metastasize to the retroperitoneum, it is important to distinguish primary retroperitoneum neoplasms (6). Most of the cases are asymptomatic or present with vague symptoms or are identified incidentally. Surgical removal of mature teratoma persists as the basis of treatment and is necessary for a conclusive diagnosis (6, 7).

This report presents an infrequent case of a PRPMCT in an adult patient aged over 30 years. The current case confirms the restriction of image-based diagnosis of adrenal masses.

A 34-year-old woman was introduced with an obscure history of left upper quadrant fullness and abdominal pain for three months. There were no other relevant symptoms, such as fever, appetite or weight loss, nausea, or vomiting. The patient had no medical and surgical history, and her family history was unremarkable. The social history was negative for cigarette smoking and alcoholism. Physical examination was normal, without any palpable mass or tenderness. Laboratory tests to exclude a functional adrenal tumor and tumor markers (CA19.9, CEA, AFP, hCG, and LDH) were within normal limits.

On evaluation with ultrasound, there was a multilocular lesion without vascularity in the left side of the retroperitoneum at the suprarenal region with an 8 cm diameter. Ovarian and other sites were normal. An abdominal contrast-enhanced computed tomography (CT) scan revealed a 66 mm circumscribed, fluid component hypodense lesion with fat attenuation and calcification in the left retroperitoneum above the kidney. No abnormal enhancement and RP lymphadenopathy were identified.

A core needle aspiration and biopsy of the cystic mass were performed. However, the collected sample was not satisfactory.

Laparotomy was performed by resection of the RP lesion of the left adrenal gland. The bulky cystic tumor was encapsulated and no invasion of renal tissue was observed. Left adrenal and bilateral ovaries were normal. 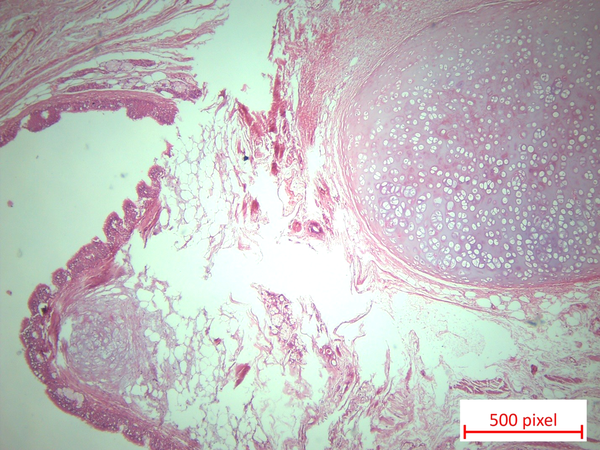 There were no postoperative complications, and she was discharged on day 4. Currently, she is well seven months after resection.

A PRPMCT in the left adrenal gland space in a 34-year-old woman is an uncommon phenomenon, and only infrequent cases have been presented (6). Teratomas are non-seminomatous germ cell tumors developed from pluripotent embryonic cells (1, 8). They are categorized based on the degree of tissues maturity (mature or immature) and the tumor components (cystic, solid components, or mixed) (9). Although teratoma is most common in the ovaries and testes, it can arise in nearly any area of the body. Most of the RP neoplasms include metastasis of gonadal malignancies, and primary neoplasms contain only 0.1 - 0.3% of cases; and 1% (6) – 11% (10) of these cases are teratomas (1, 10-12). They are usually seen in children within the primary six months and at younger ages (6, 13, 14). Merely 10 - 20% of these lesions happen in adults over 30 years old (2, 6, 14). The most admitted theory regarding the origin of the primary RP teratoma is that they are a residue of the Wolffian and Müllerian ducts or are developed from pronephric or mesonephric tubules that correspond to their midline and paramedian position (6). As in the reported case, RP teratomas in adults are usually detected on the left side of the body, in the pararenal area (4, 6, 13).

These lesions are generally asymptomatic or exist with nonspecific complaints, which makes them hard to detect. The position of the teratoma leads to the impaction symptoms of the neighboring organization such as vomiting, constipation, back pain, distention, and edema. Systemic symptoms such as fever, chills, night sweats, and weight loss could be found too (6). PRPMCT may present with chemical peritonitis following the cyst rupture (15), and may also get infected (16). Uncommon expressions consist of ocular myasthenia and hypertension that were eliminated following resection of the lesion (17, 18).

Serum markers, like CA19.9, CEA, and AFP, can be elevated in PRPMCT. Serum levels of AFP and HCG are good representatives of the presence of malignant germ cell elements (19). Increased AFP measures were present in 50% of immature teratomas and 6% of mature teratomas (20). These markers are evaluated preoperatively to exclude other germ cell tumors and follow up postoperatively to use for tumor surveillance (6). If the PRPMCT invades the adrenal gland, plasma catecholamines, renin, aldosterone, ACTH, and cortisol levels should be measured too (21). These markers were evaluated in the reported case preoperatively, and the results were in normal ranges. The report confirms that these tumors must be evaluated for the differential diagnosis of adrenal masses because a radiological assessment did not affirm the source of the RP mass (22).

Radiographic evaluations have an important role in the assessment and planning of the teratoma's surgical treatment. Ultrasound can distinguish between cystic and solid components, but it has limited sensitivity, which makes CT scan a more suitable imaging (22, 23). CT scan can provide better soft-tissue resolution and detect malignant characteristics; it is the imaging modality of choice and helps present the extent of disease in gonadal malignancies to the retroperitoneum, and involvement of blood vessels (22, 23). CT scan results suggested that primary cystic teratoma contained a well-restricted fluid element, hypoattenuating fat, and calcifications in the reported case (2, 13). Even though magnetic resonance imaging (MRI) was not a part of the assessment, in this case, they can provide better soft tissues resolution, possible diagnosis of benign and malignant features, and are superior for tumor staging (22).

Nevertheless, a certain diagnosis is formed on histopathological examination of the resected tumor. Complete excision is the choice of treatment and is recommended in all cases (6, 7, 24). Prognosis is favorable after complete surgical resection with an overall 5-year survival rate close to 100% (25). Malignant features are unusual in mature cystic teratoma, and these neoplasms are greatly resistant to radio- and chemo-therapy (6). Therefore, invasive surgical excision is suggested for the treatment of these patients with clear oncological margins.

The rate of malignant RP teratomas in adults is notably higher than in children (36.3% vs. 6.8%) and it is elevated with age, male gender, and the existence of immature tissues and solid elements (4, 6, 9, 10). The absence of malignant or immature components within the tumor, absence of other similar lesions in other parts of the body or recurrence, and normal measures of AFP and hCG are the pathological criteria for nonmalignant lesions (7). Regardless of the benign feature of mature cystic teratoma, close follow-up is advocated due to ~3-6% incidence of malignant transformation (7). Our case had no symptoms, recurrence, or other complications for seven months postoperatively.

PRPMCT rarely occurs in adult patients and must be placed in the differential diagnosis of nonfunctional adrenal masses. RP metastasis of primary gonadal teratoma should be excluded. They are usually asymptomatic, but even if they are detected by CT and MRI before surgery, a definitive diagnosis is established upon histologic assessment.

Complete resection of the tumor is needed to recognize immature and solid components that require long-time follow-up because of the greater danger of malignancy. Surgical excision is the base of management for PRPMCT, which results in 5-year survival of approximately 100% if the margins are oncologically clear.

Copyright © 2022, Author(s). This is an open-access article distributed under the terms of the Creative Commons Attribution-NonCommercial 4.0 International License (http://creativecommons.org/licenses/by-nc/4.0/) which permits copy and redistribute the material just in noncommercial usages, provided the original work is properly cited.
download pdf 3.48 MB Get Permission (article level) Import into EndNote Import into BibTex
Number of Comments: 0