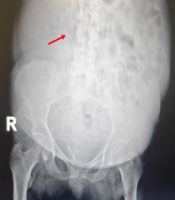 The patient was a 68-year-old woman referred to the hospital due to flank pain, fever, vomiting/nausea, frequency, and nocturia. She also had a history of DM2, hypertension, dialysis, COVID-19, and the use of NSAIDs and antihypertensive. The results of computed tomography (CT) scan suspected a clot, bladder fungus or RPN, and COVID-19. After performing the ultrasound, mild hydroureteronephrosis and two echogenic foci were seen in the right kidney, suggesting a possible RPN. The patient was transferred to the urology service. After cystoscopy and urethroscopy, a severe stenosis was seen in the distal right ureter. As soon as inserting double J, lots of pus came out. The definitive diagnosis was RPN, ureteral obstruction, and pyelonephritis.

It is important to pay enough attention to the disorders related to the urinary system, especially in the elderly with a history of NSAIDs abuse, DM2, hypertension, COVID-19, and renal diseases. Additionally, the underlying diseases, blood glucose, infection, dehydration, and use of NSAIDs must be well-controlled to protect nephro-ureteral structures.

Renal papillary necrosis (RPN) is a form of nephropathy showing the death of most or all of the cells in the renal papilla and an inflammatory reaction following that. Lesions caused by RPN are resulted from the impaired blood supply and subsequent diffuse ischemic necrosis. Its symptoms and signs include back pain, cloudy urine, tissue pieces in urine, microscopic hematuria, proteinuria, increase in serum creatinine, fever, painful/frequent urination, and urinary incontinence (1). Any condition inducing ischemia in the kidney such as pyelonephritis, obstruction of the urogenital tract, sickle cell disease, tuberculosis, cirrhosis of the liver, analgesia disorder/alcohol abuse, renal vein thrombosis, diabetes mellitus (DM), and systemic vasculitis consequently causes papillary necrosis. These risk factors often are accomplice and act synergistically to cause papillary necrosis (2). Poor glycemic control, age over 60 years, female gender, and a history of urinary tract infections can consequently increase the risk of RPN development (3). Renal papillary necrosis is more common among women, indicating a gender difference (4). In the USA, 60% of all RPN cases have a history of DM, and this statistic is reported to increase in Japan (5).

The papillae are vulnerable to ischemia because they are supplied by small caliber arteries that have a hypertonic environment and are prone to obstruction, as well as, have a hypertonic environment. All the risk factors of papillary necrosis cause diminished flow of these arteries through obstruction, inflammation, or vasoconstriction. Lastly, necrosis of the papillae results in shedding into the lumen and finally causing hematuria. If the degree of necrosis is high, a significant post-renal failure may occur; however, it is rare (6).

The diagnosis of RPN is done by blood cell count and performing urinalysis, urine cytology study, an imaging study (with intravenous contrast), the computed tomography (CT) scan with contrast, cystoscopy, and ureteroscopy (7). The treatment of RPN is supportive, in which any obstruction can be treated via stenting, except for an acute renal failure. Since infection control is important, antimicrobial treatment should be started as soon as possible to prevent surgery (8, 9).

After CT of the abdomen and pelvis, perinephric stranding was seen around both kidneys without any abscess, collection, or gas density. Slight dilatation around the right pyelocaliceal system was observed as well. A small point suspected of pebbles was seen in the distal right ureter. The results of CT scan indicated a suspected clot, bladder fungus, or RPN. On chest CT, bilateral grand glass opacities were preferentially seen in the peripheral regions and as a multilobar, which highly suggested coronavirus disease 2019 (COVID-19). On ultrasound of the urinary system, the corticomedullary echo increased, and sloughed papilla led to a view of the egg in a cup (Figure 1). Also, the AP diameter of the right renal pelvis was 14 mm. No obvious stones or hydronephrosis were observed on either side. Two echogenic foci were seen in the upper and middle calyces and pelvis of the right kidney with a possible view of a clot. Two days later, another ultrasound of the urinary system was performed, and mild hydroureteronephrosis in the right kidney was observed with a pelvic AP diameter of 15 mm. Two echogenic foci in the upper and middle calyces and pelvis of the right kidney were also seen, suggesting a possible RPN. Finally, the patient was a candidate for urology surgery to be treated with the definite diagnosis of disease. During surgery, a cystoscopy was performed, and a guidewire was inserted into the right ureter. Thereafter, a right urethroscopy was performed, which showed severe stenosis in the distal right ureter that surgeon was unable to cross it. Double J was passed through the ureteral stricture and then inserted in the ureter and right kidney (Figure 2), which immediately showed lots of pus coming out of the double J holes. The definitive diagnoses were papillary necrosis, ureteral obstruction, and pyelonephritis. 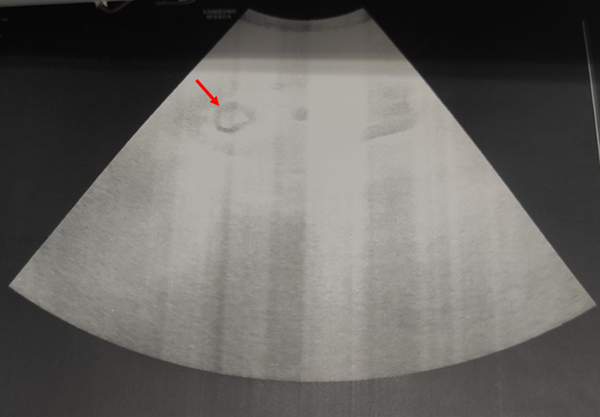 On ultrasound of the urinary system, the corticomedullary echo was increased and sloughed papilla leading to a view of the egg in a cup (arrow). 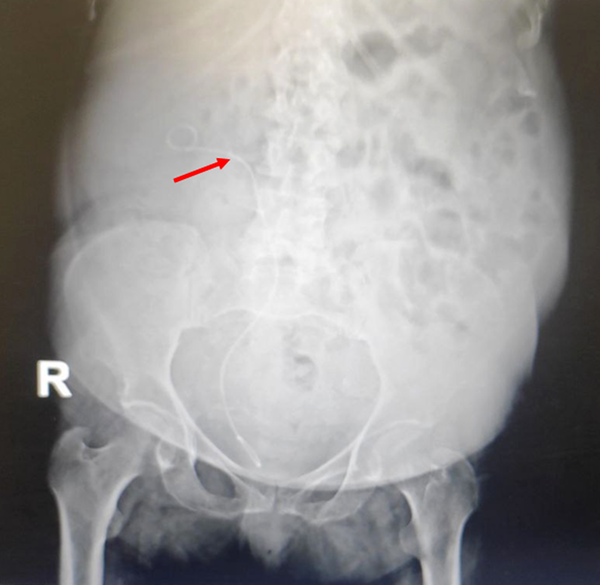 Double J was passed through the ureteral stricture and inserted in the ureter and right kidney (arrow).

This study reported a case of RPN, as a multifactorial complication, with long-term use of NSAIDs, DM2, hypertension, and COVID-19. For this patient, the RPN was successfully treated by double J insertion.

The patient in our study had been using the NSAIDs for a long time. NSAIDs have analgesic, antipyretic, and anti-inflammatory attributes, and despite having nephrotoxic potential, are extensively used worldwide. It was previously shown that prolonged use of aspirin induces both analgesic nephropathy and RPN (10, 11). In healthy people, NSAIDs can rarely cause changes in blood pressure, renal function, and balance of water and electrolytes, while in people with kidney diseases, NSAIDs interfere with the synthesis of renal prostaglandins. Kidney depends on prostaglandin to maintain glomerular blood flow and modulate afferent arteriolar resistance (12).

One hypothetical mechanism for NSAIDs nephropathy is the toxic effect on medullary cells, especially interstitial cells producing prostaglandins and proteoglycans through the acetylation of cellular proteins or the inhibition of cellular functions. These cells damage the induced matrix changes and affect the vasculature that eventually influences the kidneys’ ability to produce concentrated urine, which is known as one of the signs of RPN (13). Additionally, NSAIDs include damage of interstitial cells, cytoplasmic edema, excess proteoglycans production, microvascular leakage, degeneration of endothelial cells and loops of Henle, calcification, fibrosis, shedding of the renal papilla, and sometimes urothelial hyperplasia or neoplasia (14). Another hypothetical mechanism is an ischemic injury caused by the inhibition of prostaglandin production by cyclooxygenase. Most NSAIDs suppress cyclooxygenase genes, reduce prostaglandins, and reduce vascular medullary ischemia and diversion of blood flow to the cortex (15). Prostaglandins in the kidney cause vasodilation and inhibit the renin-angiotensin-aldosterone and the sympathetic nervous systems, thus improving renal perfusion. The suppression of these activities by NSAIDs can consequently lead to RPN (16). It was proved that prostaglandin E1 can ameliorate PRN in patients with DM (5). Both of these mechanisms lead to the decreased prostaglandins, consequently causing the decreased vascular perfusion, vasoconstriction, and eventually ischemic necrosis in the papilla. Of course, the type, dose, and duration of NSAIDs consumption are the determining factors of renal involvement, damage, and acute, subacute, or chronic papillary necrosis (17).

In addition, it has been proved that NSAIDs can reduce the effectiveness of antihypertensive drugs, including calcium channel blockers, vasodilators, and beta-blockers (12). Thus, in the studied case, the patient by the consumption of antihypertensive drugs may have probably provided the basis for chronic kidney diseases and RPN. Moreover, NSAIDs under volume-reduced conditions, such as the use of diuretics increase the risk of acute tubular necrosis (18). Volume depletion resulting from diuretic therapy can also be considered as an agent for RPN (19, 20). Therefore, another cause of the RPN in the present case could be the use of diuretics.

On the other hand, the papillary tips are more anatomically prone to ischemia compared to other parts of the medulla, because the vascular branches are widely scattered outside the medulla and gradually decreasing in the center of the medulla so that at the papillae tip little vascular communication exists (21). Normally, blood flow in the vasa recta is slow and in a state of relative hypoxia; however, any factor that further reduces blood flow can consequently cause ischemic necrosis. Furthermore, the risk of RPN significantly increases in the elderly compared to young patients, especially if it is associated with pre-existing kidney disease, nephrotic syndrome, DM, severe congestive heart failure, volume depletion, cirrhosis with ascites, hypertension, atherosclerosis, or diuretic therapy (16).

In line with our case, Tallai et al. presented a patient with RPN and a history of DM2 and COVID-19 (asymptomatic and any receive any medication) (22). They stated that COVID-19-induced viral infection may probably affect the necrotizing process in the kidneys due to unknown reasons (22). The renal papillae are sensitive to ischemic causing vascular disorder linked to diabetes, as well as interstitial edema causing infection (1). It has been proved that COVID-19 can induce hypoperfusion in end-organs such as kidney even without any sign of pneumonia (23). Panache-Navarrete et al. showed an endoscopic vision of an RPN patient with a history of DM2 (24). Moreover, Mason et al. recommended that glucose control of diabetic patients in RPN can potentially prohibit its occurrence in the future (25). Groop et al. confirmed that long-term DM2 is found among ~30% of patients with RPN (3).

In this study, the patient complained of flank pain caused by an obstruction of the right ureter. Ureteral obstruction is caused by the shedding of the papilla into the calyx, leading to flank pain. The only urological intervention for these patients is removing ureteral obstruction created by the necrotic tissue, blood clots, or obstructive pyelonephritis (8). Surgeons for the treatment of RPN should always notice the control of the underlying diseases, including blood glucose, infection, hydration, or cut-off analgesics (9).

The physicians should pay enough attention to symptoms and signs related to disorders of the urinary system such as flank pain, nausea, vomiting, anorexia, fever, weakness and lethargy, frequency, and nocturia in elderly patients with long-term consumption of NSAIDs, and history of DM2, hypertension, and renal diseases. This can help in controlling the underlying diseases, blood glucose, infection, dehydration, the use of NSAIDs, and finally protecting nephro-ureteral structures.

The authors thank the Development and Clinical Research Unit of Allameh Bohlool Gonabadi Hospital. Also, the authors would like to thank the patient and her family for their utmost cooperation.

Copyright © 2022, Author(s). This is an open-access article distributed under the terms of the Creative Commons Attribution-NonCommercial 4.0 International License (http://creativecommons.org/licenses/by-nc/4.0/) which permits copy and redistribute the material just in noncommercial usages, provided the original work is properly cited.
Get Permission (article level) Import into EndNote Import into BibTex
Number of Comments: 0